This year was a groundbreaking one for ONE Championship. The world’s largest martial arts organization continued to expand in every metric in 2018.

The foundation for this is the heroic efforts of the martial arts superstars on the roster, as their performances inspired audiences around the globe.

Some of the feats they achieved were incredible, and here are some of the most notable numbers to come on the global stage.

The Biggest Ever Year For ONE Championship 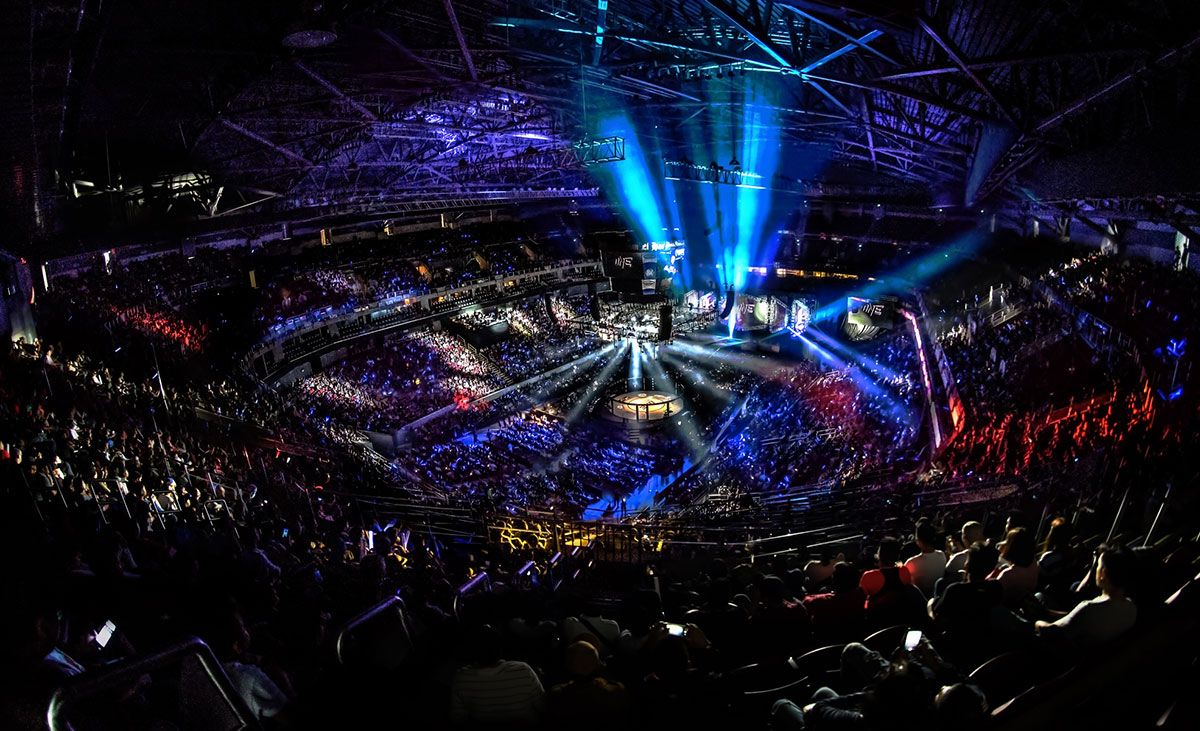 ONE held 24 events across Asia in 2018 — 21 flagship shows and three for Rich Franklin’s ONE Warrior Series — setting a new promotional record. More shows have translated to more action being enjoyed by more fans, too.

Three years ago, ONE events were reaching an average of 700,000 viewers. ONE: KINGDOM OF HEROES in Bangkok, Thailand in October was viewed by 25 million fans, with more broadcast hours and a wider footprint than ever before.

In 2018, there were more World Champions signed to the promotion than any other martial arts platform – the current total on the roster from all forms of martial arts stands at 117. As the frequency grows, the talent is growing alongside it, but this is only the start, according to ONE Chairman and CEO Chatri Sityodtong.

“While I am full of gratitude and appreciation for this extraordinary growth, I also know that it is only the beginning of our journey,” he said.

279 bouts featured from the year’s opener, ONE: KINGS OF COURAGE in Jakarta on 20 January, to the big finale, ONE: DESTINY OF CHAMPIONS in Kuala Lumpur on 7 December.

This was comprised of 220 mixed martial arts bouts, 57 ONE Super Series bouts, one monumental boxing world title match, and a grappling super-bout.

In the mixed martial arts ranks, the overall finishing rate was a remarkable 66 percent, with a near-even split of 75 knockouts and 70 submissions.

After ONE Super Series debuted in April, the all-striking bouts featured 22 knockouts, for a 39 percent finishing rate. Expect much more of the same in 2019.

Li Kai Wen gets it done QUICK.Download the ONE Super App now ???? http://bit.ly/ONESuperApp

China’s Li Kai Wen had a phenomenal year, posting a 3-0 record on the global stage for martial arts.

All three victories came inside the distance, but his 10-second demolition of Rodian Menchavez earned him the accolade for the quickest KO.

India’s Rajinder Singh Meena earned an emotional first victory in ONE and picked up a 2018 record at the same time.

Zebaztian Kadestam was another athlete who had a flawless year, with two bouts and two victories in 2018.

The Swede topped it off with a wondrous finish of Tyler McGuire to win the ONE Welterweight World Title in style at ONE: WARRIOR’S DREAM in November. He took his time though – the knockout blow came with just 28 seconds of the bout’s 25 possible minutes remaining.

2018's most active ONE athlete, Priscilla, is BACK on 19 January!Jakarta | 19 January | 6:00PM | LIVE and FREE on the ONE Super App: http://bit.ly/ONESuperApp | TV: Check local listings for global broadcast | Tickets: http://bit.ly/oneglory19

Lumban Gaol showed skill and tenacity in achieving this feat, and placed herself as one of the top contenders in the women’s atomweight division.

Who should Aung La N Sang face next?

In February, he knocked out Alexandre Machado for the ONE Light Heavyweight World Title. He successfully defended his ONE Middleweight World Title in June and October with thunderous finishes over Ken Hasegawa and Mohammad Karaki courtesy of his powerful boxing.

Japanese grappler Hayato Suzuki strangled his way to the top of the strawweight division by submitting all three of his opponents this year.

What’s more, the submission specialist confirmed his mastery of the rear-naked choke by utilizing it to tap out Yago Bryan, Robin Catalan, and Pongsiri Mitsatit. He now has 10 rear-naked choke wins on his resume.

Is Xiong Jing Nan ONE's female athlete of the year?

Is Xiong Jing Nan ONE's female athlete of the year?Download the ONE Super App now ???? http://bit.ly/ONESuperApp

China’s “The Panda” Xiong Jing Nan was one of the standout athletes of the past 12 months. She won the ONE Strawweight World Title in January by defeating Tiffany Teo, and then defended it twice in June and September.

Aung La N Sang scooped the ONE Light Heavyweight World Title in February to become a two-division World Champion, before defending his middleweight crown twice to close out the year.

Will Priscilla continue her winning ways in 2019?

Priscilla Hertati Lumban Gaol was relentless in 2018, scoring five wins in her six outings at atomweight.

Along the way, “Thathie” picked up two submissions and one TKO victory.

“The Panda” took the ONE Strawweight World Title on 20 January, and then defeated challengers Laura Balin and Samara Santos to cement her grip on the belt.

Most wins at strawweight: Adrian Mattheis – 4

Adrian “Papua Badboy” Mattheis had five outings since January, and posted an impressive 4-1 record in the ONE strawweight division.

Mattheis started the year on an even keel with a 3-3 record, but his three finishes and one decision win extended his record to 7-4.

Who should Danny Kingad face next?

Posted by ONE Championship on Friday, December 14, 2018

Most wins at flyweight: Danny Kingad – 3

Danny Kingad has started to pave his road back to gold as he went unbeaten through bouts in March, June, and September.

The Team Lakay man has his eyes on another ONE Flyweight World Title shot, and decision wins over Sotir Kichukov, Ma Hao Bin, and Yuya Wakamatsu moved him much closer.

Most wins at bantamweight: Sunoto – 4

“The Terminator” Sunoto opened up his account with a submission over Rin Saroth in January.

Decision wins over Hisyam Samsudin and Roel Rosauro preceded his only loss to Shuya Kamikubo in July, but he ended the year on a high by submitting Victoria Senduk at ONE: CONQUEST OF HEROES.

Two quickfire wins and one of the year’s most exciting bouts all formed a part of Li Kai Wen‘s 3-0 slate.

The Chinese athlete has marked himself as a top featherweight prospect, and he has his eyes on a title shot in 2019 off the back of three straight finishes.

Who should Shinya Aoki face next?

Who should Shinya Aoki face next?Download the ONE Super App now ???? http://bit.ly/ONESuperApp

ONE Lightweight World Champion Eduard Folayang has had a remarkable year.

Two unbeaten Russian opponents stepped up to face the Filipino hero and left with their only career blemishes, and then he overwhelmed Amir Khan in November to win back the belt.

Shinya Aoki, the former World Champion, stopped three high-level opponents in the first round to earn his route back t0 the gold.

Rasul Yakhyaev, Shannon Wiratchai, and Ev Ting all fell by the wayside as the Japanese legend worked his way back to the top.

Zebaztian “The Bandit” Kadestam‘s knockouts of Agilan Thani and Tyler McGuire earned him the ONE Welterweight World Title, but Luis “Sapo” Santos is eyeing up his gold after two wins of his own this year.

The former rivals first met in 2017. A late KO from Kadestam turned the tide against the Brazilian veteran, but both have been formidable in 2018, which could set the table for a rematch next year.

“The Burmese Python” Aung La N Sang‘s two ONE Middleweight World Title defenses gave him the most victories in the middleweight division in 2018.

It was in style too, as “The Burmese Python” knocked out Ken Hasegawa and Mohammad Karaki.

Who's next for "The Panther?"

Who's next for Alain 'The Panther' Ngalani?Download the ONE Super App now ???? http://bit.ly/ONESuperApp

Posted by ONE Championship on Monday, December 17, 2018

It wasn’t the busiest year for the light heavyweight division, with lone wins for Aung La N Sang and Alain “The Panther” Ngalani topping the list.

Brandon “The Truth” Vera returned to rule the heavyweight division and defended his crown with a big knockout over Mauro “The Hammer” Cerilli at ONE: CONQUEST OF CHAMPIONS.

Alexandre “Bebezao” Machado overcame a tough first round from Hideki Sekine, and could have punched his ticket to a World Title shot with a second-round TKO.