South American Mixed Martial Arts Champion Samara Santos is from the northern Brazilian state of Pará along the Amazon river, where she grew up impoverished but happy as the child of farm workers. She started training in Muay Thai in 2013 at the age of 20, at the urging of some of her friends who were already training. Santos then met a Brazilian jiu-jitsu instructor the following year, and soon became enamored with “the gentle art.”

Proving to be as talented as she is hardworking, Santos made her professional cage debut in April 2015, winning via TKO and kicking off a string of five consecutive victories to begin her career on a hot streak. The Brazilian star then put together an excellent record competing in her native Brazil, winning a regional strawweight championship to put her on the international radar.

Santos soon signed with ONE Championship in 2018, and was immediately thrust into the spotlight with a main event World Title bout against ONE Women’s Strawweight World Champion Xiong Jing Nan in her opponent’s home country of China. Now that she has the opportunity of a lifetime, she has her sights set on the ONE Strawweight belt, and is determined not to rest until it is in her grasp. 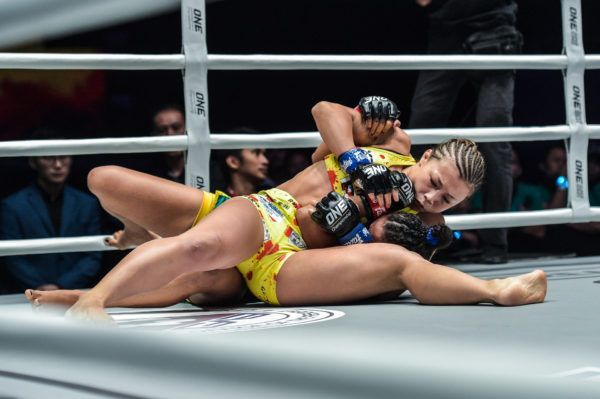