Ayaka Miura is one of the most exciting rising stars in women’s mixed martial arts.

The third-degree judo black belt from Japan has made a rapid rise in the sport, despite a relatively late start to her professional career, and she is already targeting a ONE Championship World Title belt.

In February, she made a sensational promotional debut, and now she is ready to take the next step toward the gold against Samara “Marituba” Santos this Friday, 2 August at ONE: DAWN OF HEROES.

Ahead of the 28-year-old’s return to action in Manila, Philippines, she explains how she went from being a quiet, suburban girl to an elite athlete in the world’s largest martial arts organization.

Miura had a very sheltered childhood as an only child from a close family in Saitama – the suburbs of the Greater Tokyo area.

She admits she was a quiet kid, but she was happy.

Though she adds she was not particularly athletic or interested in competition, she did gymnastics and swimming for six years through elementary school, before she took an interest in martial arts as a teenager.

“My father watched martial arts on TV, so I became interested in it from then,” she explains.

“I started judo in junior high school, but my parents were against it at first.

“What I love about judo is the feeling of scoring a clean throw – an ippon. It’s beautiful.

“I explained how much I enjoyed the challenge of judo, conveyed my feelings to them, and I persuaded them that my intentions were positive.”

This was the beginning of Ayaka’s martial arts journey, and it forced her to discover levels of confidence and strength that she never knew she had.

Her practice sessions were grueling, but she persevered through them to propagate through tough competition on the Japanese circuit, achieve a high rank, and lay the foundations for her future career.

“The training was tough, but never once did I think about giving up,” she says.

From Judo To Mixed Martial Arts

Miura’s martial arts journey took a new turn when her workplace was frequented by two-division DEEP World Champion Ryo Chonan – one of the iconic names on the Japanese scene – and his team.

“I decided to get into mixed martial arts when I was working at a bone-setting clinic where Chonan-san and some of the Tribe Tokyo MMA athletes came for treatment,” she explains.

“I was intrigued and wanted to go to their gym.”

Under the watchful eye of Chonan, she added striking and more grappling skills to compliment her judo base.

She eased into professional competition at the age of 22 with a grappling bout before she made her mixed martial arts debut a year later in the DEEP JEWELS organization, which she won by submission in the first round.

“It was a good feeling, but I still had a lot to learn,” she says.

Following a defeat – albeit against an opponent with 21 bouts on her record – in her second pro match, the Saitama native spent almost two years on the sidelines but returned to win six of her next seven bouts in the next 24 months and earn her place in The Home Of Martial Arts. 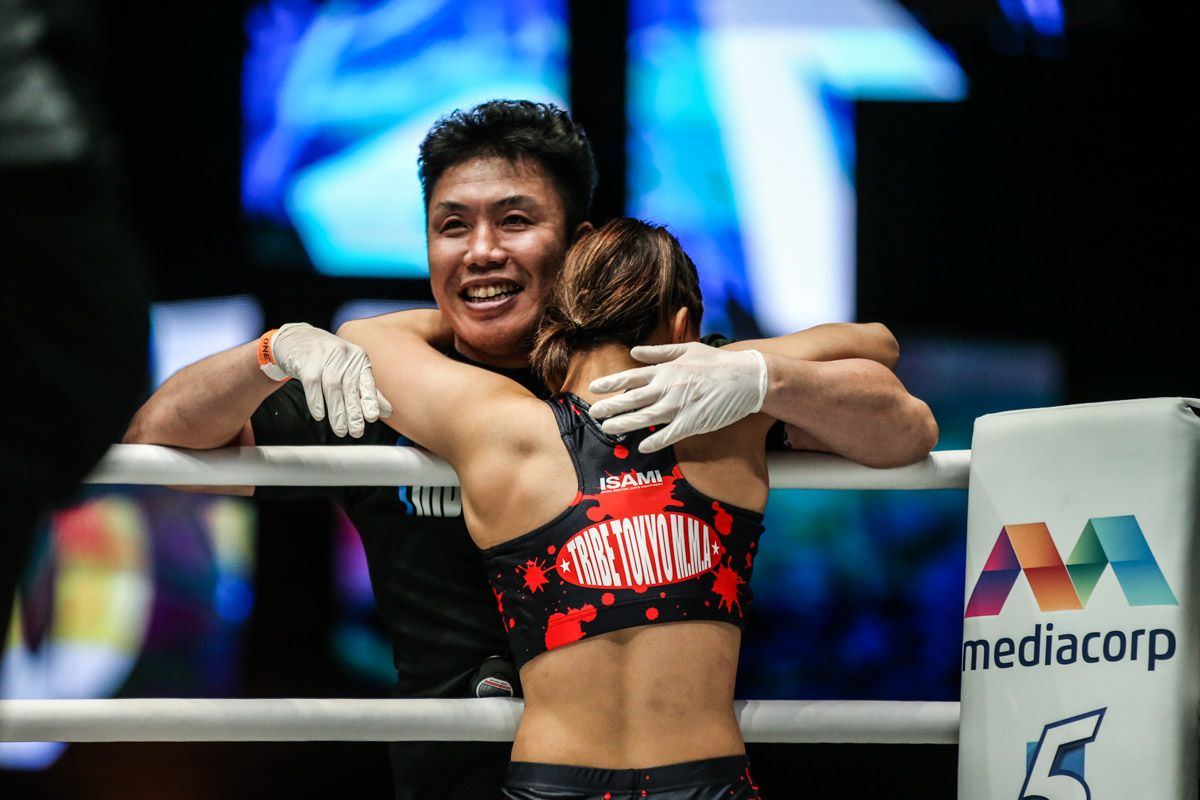 Miura says that none of her success would be possible without her coach, who has also mentored the likes of ONE flyweight star Yuya “Little Piranha” Wakamatsu.

“He has helped me with everything and gives me lots of support,” she says.

“Because of him, I’ve learned a higher level of discipline and self-control. I’m able to analyze myself more now – my training, condition, technique and skills, and my strengths and weaknesses.”

Chonan is very open on social media when any of his athletes do not display the professionalism he expects and shows himself, but he is also quick to praise his students who show heart and integrity.

“Chonan-san has taught me the importance of pushing forward through the toughest and most painful moments in training and competition,” she adds.

Few athletes exemplify this better than Miura, who earned the nickname “Zombie” early in her career due to her ability to push through adversity.

Taking Aim At The Top

In her ONE debut, Japanese phenom Ayaka Miura pulls out an incredible submission to finish Laura Balin at 1:13 of Round 1!Watch the full event on the ONE Super App 👉 http://bit.ly/ONESuperApp | TV: Check local listings for global broadcast

Miura’s ONE debut went perfectly, despite her nerves about taking her first trip overseas to compete on the global stage.

She tossed former ONE Women’s Strawweight World Title Challenger Laura Balin onto the mat and used her trademark scarf-hold armlock submission to get the finish after just 73 seconds.

It was clear how much the victory meant to her, as she almost broke down with emotion in the center of the ring.

“What I love most about competing in mixed martial arts is the feeling of winning and standing in the ring having my name called. It’s the best feeling!” she says.

Her performance made the judoka one of the top talents to watch in 2019, and she wants to remind fans why at ONE: DAWN OF HEROES.

This Friday, Miura intends to win in style once again.

“The first thing for me now is to not just win my next bout with Samara Santos, but to stop her,” she says.

“Then, later this year or next year, I would like a World Title match and to become a World Champion.”