It has been a year filled with epic Muay Thai and kickboxing moments.

New stars were born, young contenders emerged on the global stage, and legends have remained strong at the top of ONE Super Series.

There have been dozens of athletes who have picked up career-defining victories and raised their stock in The Home Of Martial Arts in the last 12 months, but only a small handful have separated themselves from the pack.

With that said, we proudly reveal the Top 5 ONE Super Series Warriors Of 2019. Each one of these warriors put together incredible win streaks, delivered amazing performances, and captured World Title gold.

Rodtang “The Iron Man” Jitmuangnon earned the top spot thanks to a flawless year that saw him earn the most victories of any athlete on the global stage.

The Thai superstar went 5-0 in ONE Super Series since he started his campaign in January. Along the way, he won – and then successfully defended – the ONE Flyweight Muay Thai World Championship.

While the 22-year-old was effective inside the Circle, he was also the most consistently exciting striker on the roster.

Rodtang thrilled in his opening victory against Fahdi Khaled at ONE: HERO’S ASCENT in January, and then he engaged in another ‘Bout Of The Night’ contender with Hakim Hamech at ONE: A NEW ERA in March.

The Bangkok native earned his World Title challenge when he stopped Sok Thy with a relentless barrage of low kicks at ONE: WARRIORS OF LIGHT in May, and then he won the crown in the ‘ONE Super Series Bout Of The Year’ against Jonathan “The General” Haggerty at ONE: DAWN OF HEROES in August.

Finally, in October, he closed out his year on the global stage with a successful World Title defense against Brazilian challenger Walter Goncalves at ONE: CENTURY PART II.

Fans are already excited for his imminent return on Friday, 10 January, when he will re-run the epic clash with Haggerty at ONE: A NEW TOMORROW. Judging by 2019 alone, the global fanbase will be in for a treat.

There are very few kickboxing legends who are still operating at the top of their sport, but Giorgio “The Doctor” Petrosyan is one of them.

The Armenian-Italian technician had his busiest calendar year since 2012. He went undefeated in four bouts on the global stage en route to claiming the most prestigious prize in kickboxing history.

Petrosyan got off to a false start in the ONE Featherweight Kickboxing World Grand Prix when his initial encounter with Petchmorakot Petchyindee Academy at ONE: ENTER THE DRAGON in May was ruled a no contest.

However, he corrected that immediately with a clear decision win over the Thai at ONE: MASTERS OF DESTINY in July.

“The Doctor” knocked out “Smokin” Jo Nattawut in the semifinals at ONE: DREAMS OF GOLD in August, and then he dominated Samy “AK47” Sana with a sublime performance to win the ONE Featherweight Kickboxing World Grand Prix Championship belt and the tournament’s $US 1 million purse at ONE: CENTURY PART II.

At 34 years old, Petrosyan is showing no signs of slowing down. In fact, he is still improving every time he steps into the Circle.

Another striking luminary ignited ONE Super Series in 2019.

In February, the Evolve representative defeated Han Zi Hao at ONE: CLASH OF LEGENDS to win the belt, and he outclassed Hiroaki “Kaibutsukun” Suzuki at ONE: WARRIORS OF LIGHT in his first defense in May.

Following a hard-earned decision win over Brice “The Truck” Delval at September’s ONE: IMMORTAL TRIUMPH, the Thai hero put a stamp on his year with a massive KO of his countryman Saemapetch Fairtex at ONE: EDGE OF GREATNESS in November.

Nong-O is now the most dominant champion in ONE Super Series history, and he has looked unstoppable since debuting in the world’s largest martial arts organization nearly two years ago.

Regian “The Immortal” Eersel won the first-ever ONE Super Series match-up in April 2018, but he truly announced himself to the world this past year.

The Dutchman knocked out Anthony “The Assassin” Njokuani at ONE: CALL TO GREATNESS in February to kickstart his 2019, and he earned a shot at the inaugural ONE Lightweight Kickboxing World Championship.

In a pair of bouts against legendary Dutch striker Nieky “The Natural” Holzken, “The Immortal” came out on top.

Eersel originally defeated Holzken for the crown at ONE: ENTER THE DRAGON in May, and then he solidified his position as the best lightweight kickboxer on the planet in their immediate rematch at ONE: DAWN OF VALOR in October.

There has been a lot of moving parts for Stamp Fairtex this year, but among her busy schedule, she has won — and then defended — her second ONE Super Series World Championship.

In February, Stamp beat Janet “JT” Todd via unanimous decision to win the ONE Atomweight Muay Thai World Title at ONE: CALL TO GREATNESS. By doing so, she became the first two-sport ONE World Champion in history.

What’s more, she defended that crown against Alma Juniku at ONE: LEGENDARY QUEST in June.

A pair of successful mixed martial arts outings kept her away from ONE Championship’s all-striking branch, and she will continue her quest for three-sport ONE World Title gold against Puja “The Cyclone” Tomar at ONE: A NEW TOMORROW.

Later in 2020, however, Stamp intends to return to ONE Super Series and defend her belts. 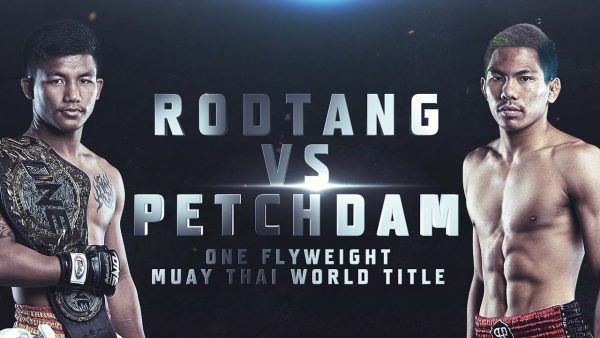