ONE Championship is gearing up for its biggest show of the year, and the stakes could not be any higher.

This Friday, 30 October, the world’s largest martial arts organization hosts ONE: INSIDE THE MATRIX at the Singapore Indoor Stadium, and every athlete has a tremendous amount to gain in “The Lion City.”

From earning redemption to winning a ONE World Title and making history, it’s clear that a victory could change someone’s life in an instant.

With that in mind, here is what’s at stake for every mixed martial artist on Friday night.

The promotion’s biggest show of the year comes with a fitting main event, as two-division ONE World Champion Aung La “The Burmese Python” N Sang will defend his middleweight belt against undefeated contender Reinier “The Dutch Knight” De Ridder.

Aung La N Sang has looked unstoppable since claiming the ONE Middleweight World Title from Vitaly Bigdash in June 2017. The Myanmar sports icon is riding a seven-bout winning streak, earned the ONE Light Heavyweight World Title during that span, and most recently knocked out heavyweight king Brandon “The Truth” Vera.

“The Burmese Python” already holds most of the promotion’s middleweight records, but if he retains the belt on Friday, he would also slide into second for most World Title bout wins and most World Title defenses in ONE history. What’s more, if he knocks out De Ridder, Aung La N Sang would rank third for both finishes and KOs in promotional history.

However, that will be easier said than done against the Dutchman.

Since making his professional debut in June 2013, De Ridder has literally been unstoppable. He holds a flawless 12-0 slate and has finished every single opponent except five-time Brazilian Jiu-Jitsu World Champion Leandro “Wolf” Ataides, whom he defeated via unanimous decision in February.

For De Ridder, this is a chance to become an undefeated World Champion – something that is practically unheard of in mixed martial arts. But in order to achieve this rare feat, he must take out an icon this Friday.

The co-main event features a pair of lightweight stars who are young, talented, and almost always leave the Circle with a submission or knockout.

Since moving up from the featherweight division last year, Christian “The Warrior” Lee has looked even more comfortable in his heavier surroundings. Case in point: He defeated two of the division’s top five contenders in Shinya “Tobikan Judan” Aoki and Saygid “Dagi” Guseyn Arslanaliev to claim the ONE Lightweight World Title and ONE Lightweight World Grand Prix Championship, respectively.

Now, Lee will make his first ONE Lightweight World Title defense against the division’s #1 contender, Iuri Lapicus, and there is plenty at stake for the Singaporean-American.

A victory would see him retain his belt and make him the sole record holder for most wins in ONE Championship history (a record he currently shares with Amir Khan at 13). Furthermore, a stoppage win would extend his record for most finishes to 13. More specifically, a knockout would tie Lee with Khan for the most KOs in the promotion (nine).

While Lee could make history and get his World Title reign off to a blistering start, Lapicus is looking to achieve a feat quite similar to the aforementioned De Ridder.

The Moldovan bulldozer holds a flawless 14-0 professional record and a 100 percent finishing rate. What’s more, he’s finished every opponent but one in the very first round.

At ONE: INSIDE THE MATRIX, Lapicus could capture a World Title, remain undefeated, and keep his perfect finishing rate intact. And again, that’s something very few athletes have accomplished in mixed martial arts.

A battle between world-class knockout artists will commence at ONE: INSIDE THE MATRIX, as ONE Featherweight World Champion Martin “The Situ-Asian” Nguyen defends his title against the division’s #3-ranked contender, Thanh Le.

Now making his fourth ONE Featherweight World Title defense on Friday, “The Situ-Asian” could break a slew of divisional records and cement himself as the most dominant featherweight to ever grace the Circle.

However, Le plans to destroy those plans and achieve his own dream.

The Vietnamese-American, who has a perfect 100 percent finishing rate, knocked out Yusup “Maestro” Saadulaev, former ONE Lightweight World Champion Kotetsu “No Face” Boku, and Shooto Pacific Rim Featherweight Champion Ryogo “Kaitai” Takahashi to earn his crack at the gold.

Although Le may not break any records on Friday, he’ll be aiming to keep his flawless finishing rate intact and capture the ONE Featherweight World Title.

The two most highly regarded athletes in the women’s strawweight division will run it back on Friday, as ONE Women’s Strawweight World Champion “The Panda” Xiong Jing Nan defends the gold against #1-ranked contender Tiffany “No Chill” Teo.

When these competitors first met in January 2018 for the inaugural crown, Teo started off strong with her grappling. But ultimately, Xiong took over with her phenomenal striking and finished Teo in the fourth round to take the gold.

Since then, the Chinese star has successfully defended her throne three times. Along the way, she became the first person to defeat – and finish – ONE Women’s Atomweight World Champion “Unstoppable” Angela Lee.

Xiong wants to prove that she is the rightful strawweight queen. And by taking out “No Chill” in their rematch, she would leave no doubts.

On Friday, Teo gets a chance to avenge her only career loss, win the belt, and eat that slice of redemption she’s been craving for two-and-a-half years. 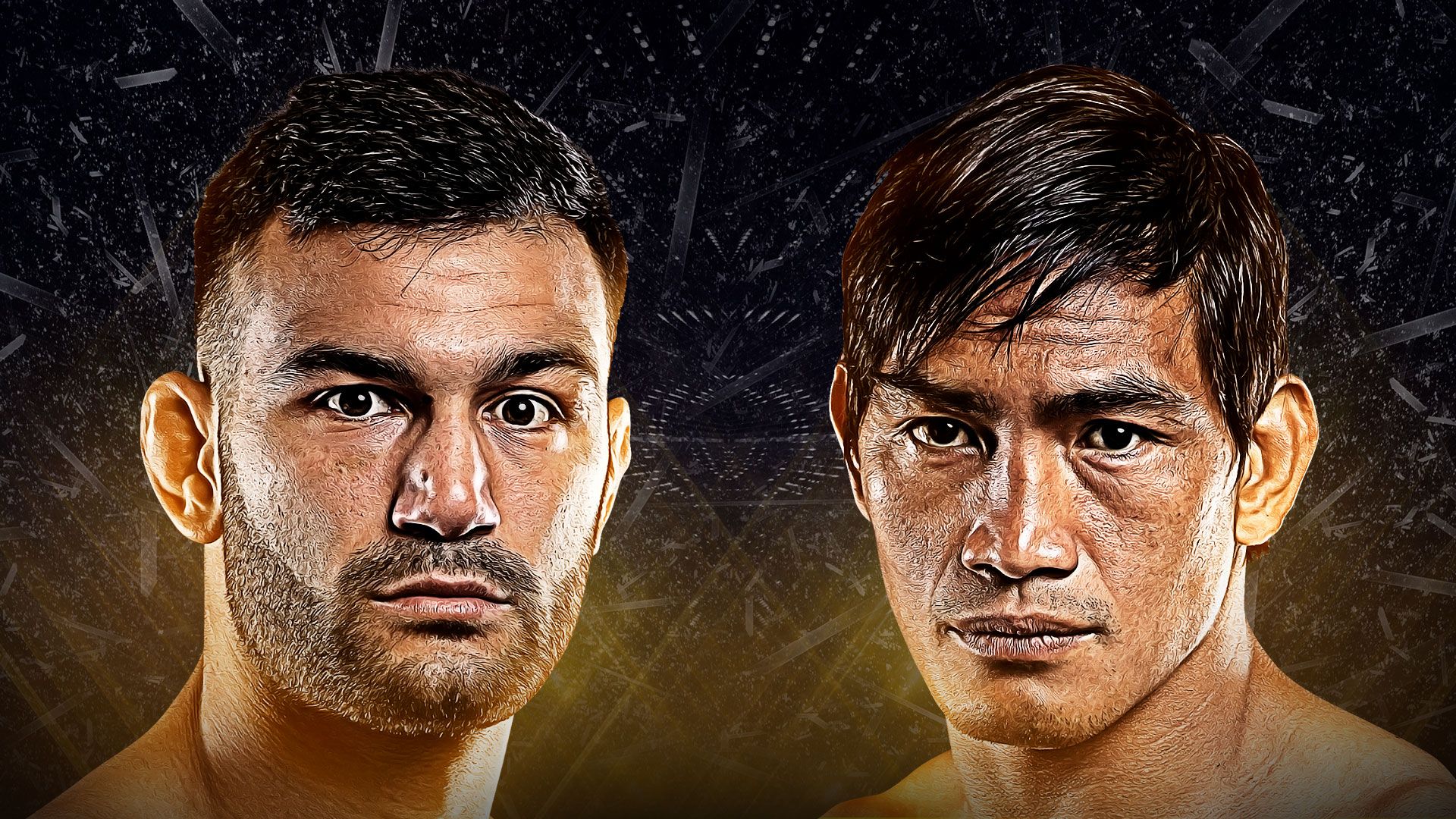 While this isn’t a World Title bout, fans will be treated to an exhilarating lightweight affair between Filipino icon Eduard “Landslide” Folayang and Australian sensation Antonio “The Spartan” Caruso.

Each man wants to break into the ONE Lightweight World Title picture, but the former divisional king will be feeling a bigger sense of urgency. Folayang has lost three of his last four bouts and knows this could be his last shot to kick-start a run to the top.

Fortunately, he’ll be fighting in Singapore, where he’s gone 6-1 and recorded a monumental ONE Lightweight World Title victory over Aoki in November 2016. If there is any place where Folayang can right the ship, it’s “The Lion City.”

However, Caruso’s biggest strength is his grappling, and that could cause trouble for the wushu specialist. In fact, “The Spartan” intends to take the next step in his career and use “Landslide” as a stepping-stone in his quest for the ONE Lightweight World Championship.

In the end, only one of these men can move forward on Friday.

Fans will be entertained when two of the most accomplished female martial artists in their respective disciplines throw down in the opening bout of the night.

Ritu “The Indian Tigress” Phogat is a wrestling icon who’s masterfully applied her grappling skills to mixed martial arts thus far. On Friday, she will attempt to remain unbeaten and get on a three-bout winning streak.

On the other side is Kun Khmer World Champion Nou Srey Pov, who can turn off any atomweight’s lights with her striking and now possesses the takedown defense to keep the action upright.

A victory would be huge for either woman as they both vie to become the first Mixed Martial Arts World Champion from their respective countries. Furthermore, an impressive highlight-reel win could potentially earn the victor an invite to the ONE Atomweight World Grand Prix in 2021.