This Friday, 30 October, Nou Srey Pov has a chance to derail a superstar’s momentum and break her way into the ONE Women’s Atomweight World Title picture.

That evening in Singapore, the Cambodian striker extraordinaire will face wrestling icon Ritu “The Indian Tigress” Phogat in the opening bout of the ONE: INSIDE THE MATRIX blockbuster event.

Srey Pov is quite familiar with the surging Indian, having witnessed the Commonwealth Wrestling Championships gold medalist brilliantly apply those wrestling abilities to mixed martial arts.

“I’ve watched her fights. She is very fast and has dangerous grappling skills. She is full of energy and strong,” Srey Pov says.

“I need to be careful from the opening round and try to escape from those difficult wrestling positions.”

Srey Pov is no slouch herself.

The 25-year-old Cambodian burst into ONE Championship with a debut victory over Thai mixed martial arts pioneer Rika “Tiny Doll” Ishige in February 2019. And heading into this fight, she’s made some pivotal changes to help counter Phogat’s elite grappling repertoire.

Additionally, the girl known as “NSP” has been leveling up her grappling at the newly established Kiri Jiu Jitsu and with the Cambodian National Wrestling Team.

“The improvements have been her defense against getting taken down to the ground,” McCune says of his student.

“Kiri Jiu Jitsu offers superb coaching and has helped ‘NSP’ in the short time we have had to prepare.

“Also, we had ‘NSP’ [work with] the national wrestling team at the old stadium where she trained against takedowns with Kru Fernando Salvador.” 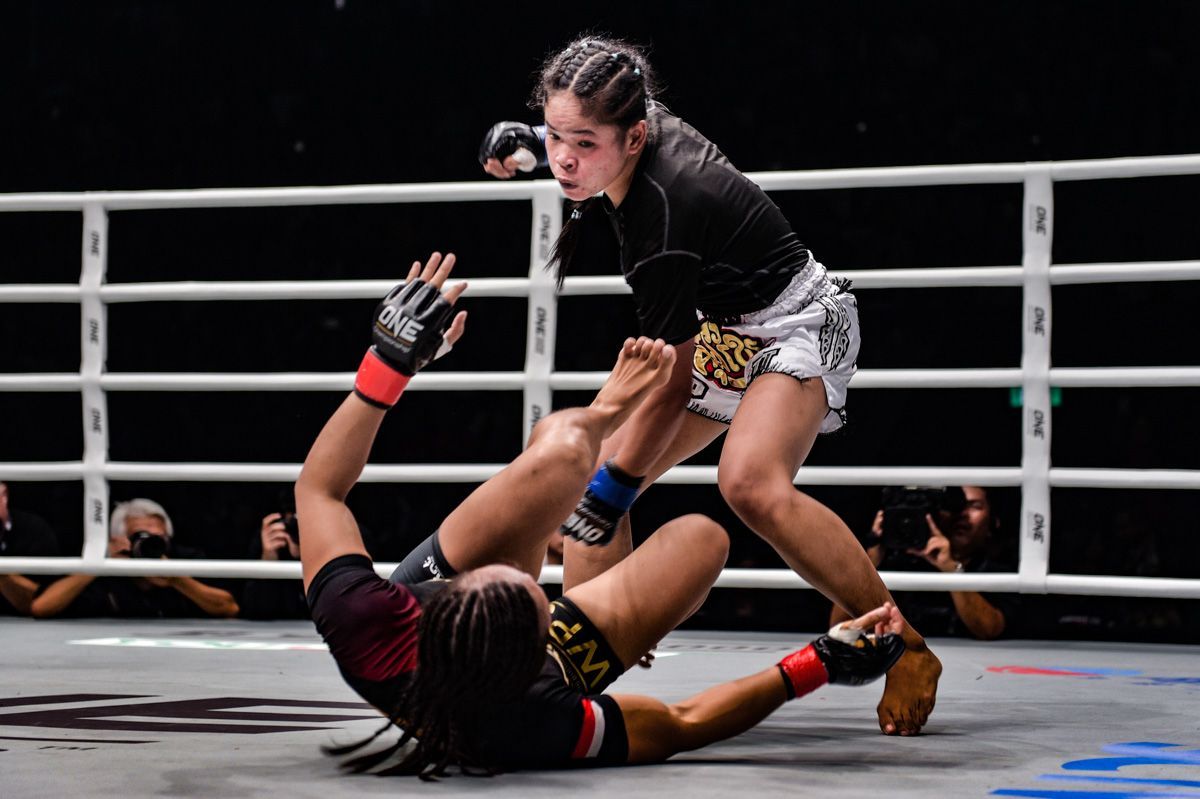 By working on her grappling and takedown defense, it’s clear Srey Pov will be looking to utilize her Kun Khmer World Title-winning skills against “The Indian Tigress.”

She holds a 91-8-2 professional record in Kun Khmer and possesses the stand-up arsenal to turn off any atomweight’s lights.

That ability, combined with her speed, is why Srey Pov’s coaches feel she holds a considerable edge.

“’NSP’ has to be fast with her hands and move out of range to stop the wrestler from getting ahold of her,” McCune says. “’NSP’ does have strikes from the bottom and on top, plus kicking, so she has a good all-around game.”

While the global fan base had seen Srey Pov use her boxing and kicking expertise in prior battles, there’s another strike she believes could help power her to victory.

“For my previous fights, I used a lot of my punches,” she says. “But this time, I might use my elbow because it is a strong and dangerous weapon.” Ultimately, this classic striker-versus-grappler matchup will feature a pair of world-class athletes who have reached the pinnacle of their respective disciplines and are fighting for a shared dream of becoming the first Mixed Martial Arts World Champion in their respective countries.

“NSP” understands the difficult task that lies ahead, and she’s taken the steps necessary to nullify Phogat’s strengths and impose her own will.

Because of that, Srey Pov’s camp believes she could be the one to stop the Indian superstar’s meteoric rise and inch closer to achieving her own World Title ambitions.

“It’s going to be a challenge,” McCune says. “But we are confident under Kru Rith Chea and all the coaches around her that she will fight for Cambodia like a true Kun Khmer warrior.”