The stacked ONE: INSIDE THE MATRIX card delivered all of the excitement that was promised – and more – on Friday, 30 October.

After a wild night in Singapore, we’ve picked out the top three highlights from the unforgettable ONE: INSIDE THE MATRIX blockbuster.

Reinier “The Dutch Knight” De Ridder needed less than a round to upset two-division ONE World Champion Aung La “The Burmese Python” N Sang and bring the ONE Middleweight World Title to the Netherlands.

De Ridder was quick to execute a body lock takedown on the Myanmar sports icon and then seamlessly flowed onto his opponent’s back at the 30-second mark.

Aung La N Sang was calm while the Dutchman sought a submission. And when De Ridder let go of the body triangle, the Myanmar hero made his move to stand. However, the challenger regained his body triangle and rode “The Burmese Python” back to the mat.

That time, De Ridder got his right arm around the chin and squeezed. As Aung La N Sang defended, the arm slipped under the chin to lock in the rear-naked choke. A tap soon followed, and a new king was crowned at the 3:26 mark of the first round.

It was a star-making performance for the new ONE Middleweight World Champion, and De Ridder will now embark on a journey as reigning titleholder while awaiting his first challenger.

Here's what went down in Christian Lee's first ONE Lightweight World Title defense against Iuri Lapicus!

While some believed the lightweight king would go down in Singapore, Christian “The Warrior” Lee overcame some early adversity to earn an impressive TKO against the previously undefeated Iuri Lapicus.

Lee rushed forward at the opening bell, but he was met with a stiff right cross. As “The Warrior” grappled to regain his bearings, the Moldovan bulldozer tossed the defending World Champion onto his back. However, the Singaporean-American worked back to his feet and scored a takedown of his own.

He wasn’t out of danger, though. As Lee mounted the challenger, Lapicus bucked and rolled out to attempt a heel hook.

But in attempting the submission hold, the Moldovan left himself defenseless. Seeing the opening, Lee dropped heavy punches and hammerfists from the top until he put the challenger away at 2:19 of the first round.

That victory gave him the most wins in ONE Championship history (14), extended his own record for most finishes (13), and tied him with Amir Khan for most knockouts in the promotion (nine).

After the win, Lee announced that he and his wife are expecting their first child. Truly, there’s no better way to celebrate his first official ONE Lightweight World Championship defense.

The SHOCKING ending to the ONE Featherweight World Title fight between Martin Nguyen and Thanh Le!

The SHOCKING ending to the ONE Featherweight World Title fight between Martin "The Situ-Asian" Nguyen and Thanh Le MMA! #InsideTheMatrix

Thanh Le extended his knockout streak to four in Singapore, earning the ONE Featherweight World Championship in the process.

Throughout the first two rounds, the Vietnamese-American utilized his movement to keep defending titleholder Martin “The Situ-Asian” Nguyen from cornering him and unleashing his powerful overhand right.

Nguyen then came out strong in the third stanza, landing power shots and seemingly nearing a finish of his own.

But as the Vietnamese-Australian pushed forward and looked for the KO, Le connected with a straight right on the button. With Nguyen on wobbly legs, Le pounced and buckled “The Situ-Asian” again with a flurry of strikes.

The ever-tough Nguyen was hanging on as Le continued pressing for the finish. In the end, a final left hook-right uppercut-left hook combination landed on the jaw, causing the referee to step in as the Aussie collapsed to the canvas.

Le got the finish he predicted, claimed the title, and will return home to Louisiana, United States as a ONE World Champion with a baby girl on the way. 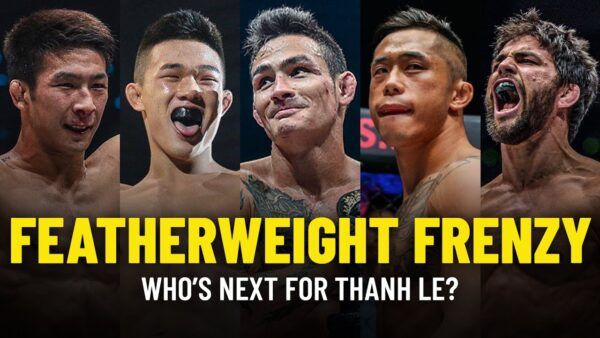