Eduard “Landslide” Folayang made history on Friday Night, 11 November. He accomplished what many thought he could not do. It was a fairy tale ending to a story that began with Folayang growing up through poverty, headlining ONE’s first ever show, and claiming a world championship five years later.

The Filipino underdog marched into the Singapore Indoor Stadium, and in front of a sold-out crowd, delivered a TKO to the legendary Shinya Aoki to claim the ONE Lightweight World Championship.

Folayang, still buzzing from his title win, expressed his feelings backstage after the monumental moment.

“It feels good after a long journey,” he explains, proudly. “It is just like what I said, this is my time and I proved it.”

Aoki fearlessly ran through Folayang’s punches, latched onto him and scored the takedown just seconds into the opening stanza. The Filipino avoided Aoki’s transitions, but as he tried getting back to his feet, “Tobikan Judan” jumped onto his back, locked in a body triangle, and began working for the rear-naked choke. With two minutes left in the round, “The Landslide” slid out and got back to his feet.

However, the Japanese lightweight kept up his hectic pace, eating a knee on his way to a body lock, and secured another takedown. Folayang pushed him away with his powerful legs, but as he returned to his stance, Aoki held him against the cage and swept his legs out from under him to end the round.

The next five minutes told a different story.

It was more of a stand-up duel, with Folayang coming close to connecting with a fierce roundhouse kick and spinning backfist. Action resumed instantly following an accidental eye poke and after a tentative moment, “Landslide” darted at the champ with a flying knee.

“Tobikan Judan” had it well scouted as he caught part of it and slammed him down. Though Aoki spent time in his guard, Folayang was able to escape. In the final minute of the second round, Folayang saw an opportunity and unloaded with an onslaught of kicks, punches, and solid knees to the Japanese native’s body. 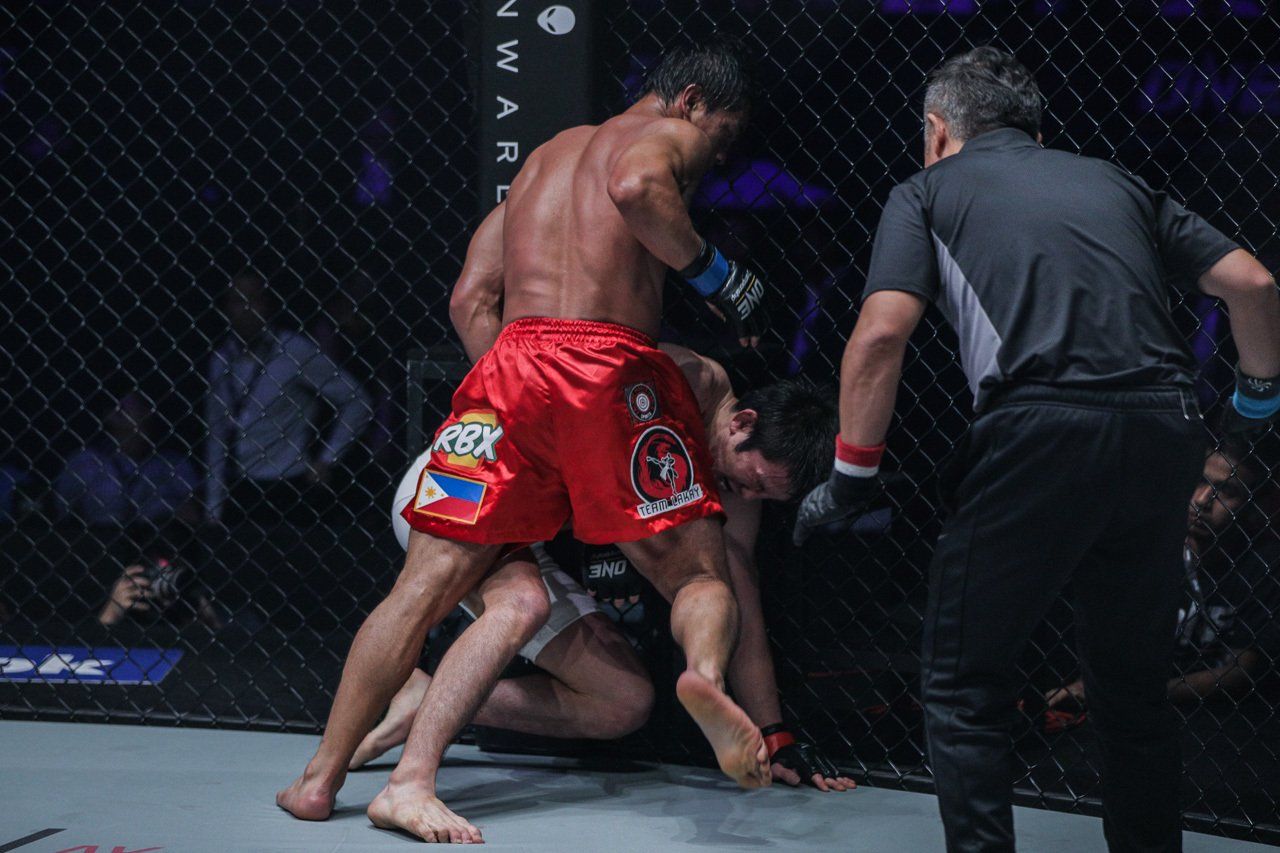 It all came to a head in the third round.

Aoki immediately rushed at Folayang’s legs, but a perfectly-timed knee stopped him in his tracks. The legend fell to his knees as “Landslide” stood over him and dropped a nonstop melee of punches.

With “Tobikan Judan” unable to intelligently defend himself, the referee called the fight, awarding the Filipino challenger both the bout and the prestigious ONE Lightweight World Championship.

Folayang may be the champ, but now he has to defend it against a list of contenders who want their shot at the gold, not including Aoki who will most certainly ask for a rematch. But that is in the future. Tonight, “Landslide” will celebrate and breathe easy.

“For now, I just go home and take some rest,” the new champ says with a smile. “After that, I’ll see whatever happens next.”

The Filipino now holds a 17-5 record with a three-fight win streak. As for Aoki, the fallen legend, he drops to 39-7 with a no contest.