ONE Championship hosted a mammoth event in Shanghai, China on Saturday, 15 June, and it delivered non-stop action in the mixed martial arts and ONE Super Series ranks.

ONE: LEGENDARY QUEST was packed with exciting back-and-forth battles, as well as memorable knockouts and submissions that will have a place on highlight reels for years to come.

Here are the five best highlights from the Shanghai spectacular.

Juniku brought her best in the biggest bout of her career and landed her right hand and elbows throughout the bout, while the Thai’s own powerful straight right and hard body kicks were her key weapons.

It looked like Stamp could be fading at the end of the fourth round to leave an opening for an upset. However, she showed the character that made her a World Champion and fired back in round five to take the nod by the closest of margins.

This was an elite showcase of Muay Thai between two of the greatest female athletes on the planet, and because it was so close, we could see it happen again.

“Muay Thai Boy” Zhang Chenglong vowed to provide a knockout for his countrymen, and he did just that against Australia’s Tyler Hardcastle in a bantamweight Muay Thai contest.

He needed less than two minutes of the opening round to land a lunging right hand on Hardcastle’s chin. Zhang covered a lot of ground to reach his target, and the Aussie was not prepared to absorb the full force of the shot.

Hardcastle dropped and could not get back up, which gave “Muay Thai Boy” his third straight win in The Home Of Martial Arts.

Han Zi Hao needed a little more time than his compatriot to get his bearings against Andrew “Maddog Fairtex” Miller, but when his punches found their mark, it did not take him long to finish.

Han dropped the Fairtex Training Center representative with a superman jab early in the second stanza, and then rocked him with a right hand.

As Miller stumbled into the corner, the former World Title challenger chased him down and found his mark with a left hook-right cross combination that sealed the deal.

???? WHAT A BOUT! ????In a ONE Super Series instant classic, Moroccan revelation Tarik Khbabez goes 4-0 with a unanimous decision victory over Brazilian beast Anderson Silva!????: Check local listings for global TV broadcast????: Watch on the ONE Super App ????http://bit.ly/ONESuperApp

Tarik “The Tank” Khbabez earned his fourth ONE Super Series victory after a blistering three-round battle against Anderson “Braddock” Silva.

Khbabez dropped the Brazilian early with his relentless boxing attack, but the battle-hardened “Braddock” got back to his feet and got straight back in his rival’s face.

Silva attacked with his left hook to the body and dynamic kicking arsenal, but “The Tank’s” unstoppable forward pressure saw him land hard hooks and uppercuts all over his opponent.

To his credit, Silva’s chin somehow held up, but the formidable Dutch-Moroccan was the clear victor, and he earned the judges’ decision at the end of this instant classic.

#5 Rodlek And Harrison Open The Main Card In Style

Rodlek PK.Saenchaimuaythaigym and Liam “Hitman” Harrison are both revered World Champions in the Muay Thai community, and they showed why in another epic match that opened the evening’s main card.

Harrison’s low kicks came fast and heavy at the Thai, and they would have finished most men who do not possess the Thai’s toughness.

The power in Rodlek’s hands was always a threat, and he dropped the Brit in the second stanza, but “Hitman” came back strong with his own offensive in the final round.

The fans that witnessed this breathless encounter could claim to be the real winners, but Rodlek got the only ‘W’ that matter via a decision – even though he wore the scars of battle with his opponent. 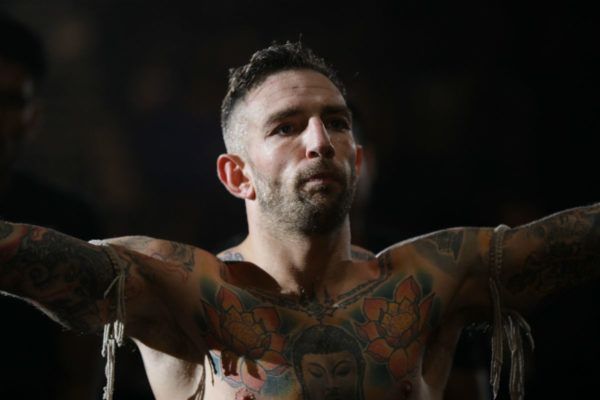