To achieve greatness in the world of martial arts, an athlete must consistently win in the most decisive manner possible – via stoppage. For the heroes of ONE Championship, that is a never-ending quest in their respective martial arts journeys.

On Friday, 18 August, those heroes will return to the Stadium Negara in Kuala Lumpur, Malaysia, and attempt to move closer towards their goals at ONE: QUEST FOR GREATNESS.

In the main event, Martin “The Situ-Asian” Nguyen will challenge unbeaten ONE Featherweight World Champion Marat “Cobra” Gafurov for the title, in a rematch of their quick encounter back in September 2015.

Also on the card are top contenders who are working towards future title shots, prospects looking to make a name for themselves, and local stars who have the chance to shine on their home turf. The only way to guarantee that is with a highlight reel finish, which they have proven to be quite good at.

Here are nine incredible finishes from the heroes competing at ONE: QUEST FOR GREATNESS. A year later in their rematch, he got the job done in a single round. The undefeated Russian briefly exchanged with Jadambaa before taking him to the ground. There, it was only a matter of time before he coiled his body like the “Cobra” that he is, and succeeded in getting his sixth consecutive rear-naked choke finish.

Martin Nguyen Puts Christian Lee To Sleep At ONE: HEROES OF THE WORLD

Martin “The Situ-Asian” Nguyen always feels like the underdog, but the 28-year-old Australian took it personally when then-unbeaten teenage wrecking ball Christian “The Warrior” Lee was favored to defeat him in their August 2016 match-up.

Nguyen used that as extra motivation during their riveting contest. Despite appearing momentarily stunned by Lee, the enlivened Vietnamese-Australian rocked his nemesis with one of his infamous left hooks, locked-in a modified guillotine choke, and put the young prospect to sleep.

Ev Ting’s Head Kick Knockout Of Edward Kelly At ONE: ROAR OF TIGERS 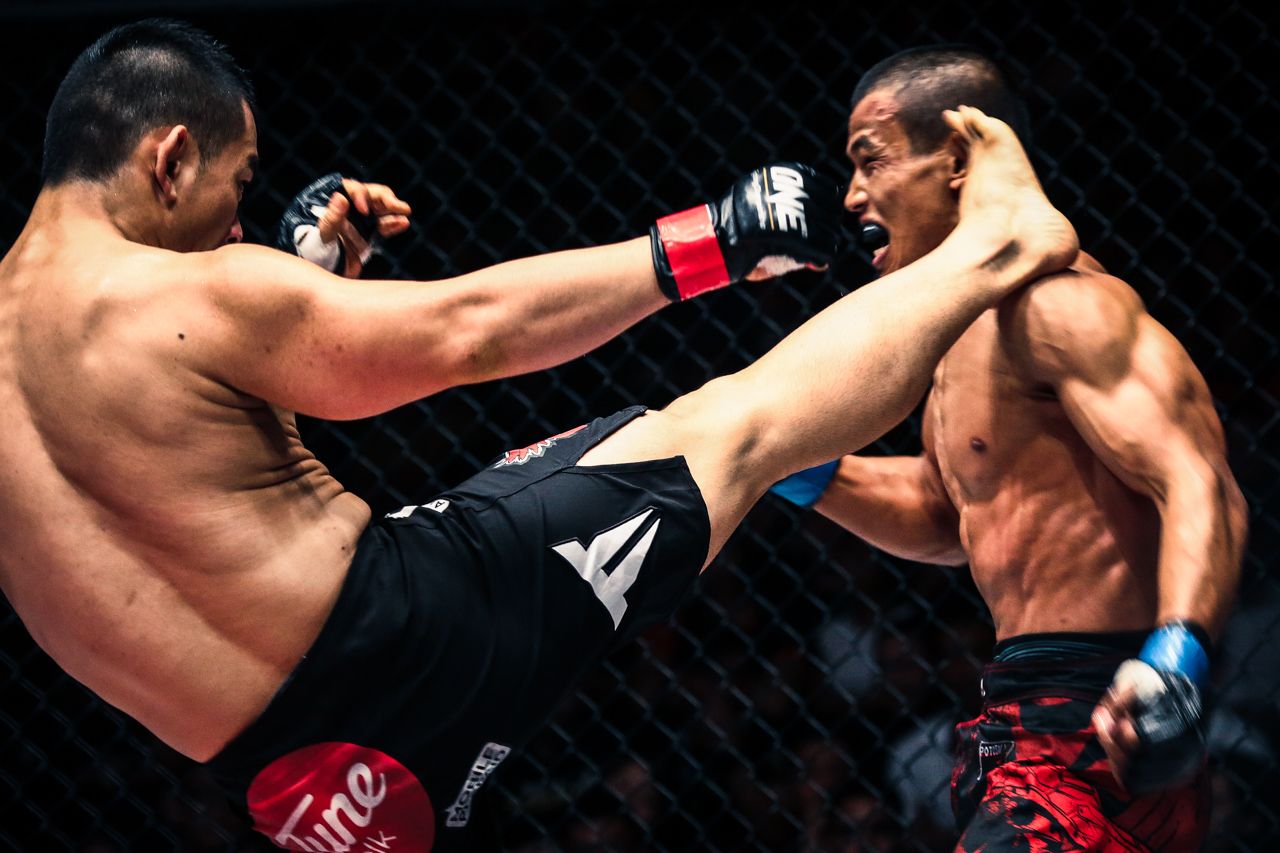 Up until recently, Ev Ting was the “Bane of Baguio City‘. Up until he fell to ONE Lightweight World Champion Eduard Folayang, the Malaysian seemed to defeat any athlete who was from the Philippines put in front of him. It all started back in October 2014 with Edward Kelly. The match was martial arts at its finest.

Both competitors were explosive, going for takedowns, and throwing an exciting array of knees, punches, and kicks. The most thrilling strike, however, happened with 35 seconds left in the second round. Ting stepped out and threw a roundhouse right kick that smacked Kelly in the temple, and knocked him out instantly.

Agilan Thani Taps Out Jeff Huang At ONE: THRONE OF TIGERS Agilan Thani continued to live up to his “Alligator” moniker back in February, as he relentlessly attacked Chinese Taipei’s Jeff Huang in their welterweight affair. The Malaysian absolutely smothered and wore out Huang in the first round, which set the stage for a second-round finish.

Thani pressed his exhausted foe against the cage, dragged him to the mat, and got both hooks in. The rear-naked choke soon followed, and so did a title opportunity against Ben Askren.

Kevin Belingon Batters Toni Tauru At ONE: KINGS OF DESTINY

Kevin “The Silencer” Belingon is one of the most dangerous strikers in the bantamweight division, and this past April in Manila, Finnish ground specialist Toni “Dynamite” Tauru found that out the hard way.

The Filipino threw some calculated strikes in the opening stanza, and after Tauru caught one of his kicks, the bout seemed destined to be contested on the ground. But the Team Lakay warrior immediately got back up, chased his opponent all over the cage, and battered him with punches so hard, he verbally tapped out.

Reece McLaren Upsets Mark Striegl At ONE: SPIRIT OF CHAMPIONS

Speaking of underdogs, Nguyen’s fellow countryman Reece “Lightning” McLaren has been considered one ever since he first put on a pair of gloves. In December 2015, he was pitted against Mark “Mugen” Striegl, an overwhelming favorite who was touted as the next bantamweight contender.

Though Striegl brought McLaren to the ground early on, “Lightning” turned things around in the third round. He turned the Filipino’s takedown attempt into a guillotine choke, re-positioned himself, and eventually got the full mount. Then, he softened Striegl up with some ground strikes, got him to roll over, and eventually secured the match-ending rear-naked choke. That night, a new star was born. Multi-time Lumpinee World Champion Dejdamrong Sor Amnuaysirichoke was having a stellar time in the ONE Championship cage. After winning his first three bouts, he was set to clash with Wushu world champion Rene Catalan in December 2014, in what was to be an epic stand-up war.

This, however, served to be the Singaporean-based Thai’s quickest battle to date. Halfway through the opening stanza, Evolve MMA’s “Kru Rong” showed the ferocity of his Muay Thai and clinching skills, as he fired a knockout knee strike to his opponent’s liver. Five months later, he became the inaugural ONE Strawweight World Champion. This past February, Malaysian women’s martial arts pioneer Ann “Athena” Osman bounced back from a tough loss by welcoming Cambodia’s Vy Srey Khouch to ONE Championship.

Osman was patient, as she was cautious of her kun khmer-trained adversary, but after catching a kick, she drove Khouch to the canvas and brought her into her world. From there, “Athena” meticulously advanced to the mount and dropped bombs until the referee stopped the bout with just a few ticks left in the opening frame.

Edward Kelly’s Comeback Against Sunoto At ONE: AGE OF DOMINATION Edward “The Ferocious” Kelly had a glorious homecoming in Manila last December, when he took on “The Terminator” Sunoto. While the opening two stanzas of their match was a grappling and clinch battle, mostly initiated by Sunoto, the Filipino completely turned the tide in the third round.

Right when the Indonesian bulldozer went for a takedown, Kelly threw a right roundhouse kick that connected with his opponent’s chin and dropped him to the canvas. Then, living up to his nickname, the Team Lakay warrior mounted him and ferociously ground-and-pounded the Indonesian until the referee declared him the winner.