The women’s atomweight mixed martial arts division has always been one of the most action-packed groupings in ONE Championship, but it’s starting to get more competitive at the top.

While the crown has long been worn by a seemingly invincible queen, a slew of threatening contenders have emerged over the past year.

With ONE: A NEW BREED in the rear-view mirror, let’s take a look at those contenders and break down the blossoming atomweight division.

When it comes to the women’s atomweight division, “Unstoppable” Angela Lee has truly lived up to her moniker. To date, she has never lost in this weight class.

Since edging out Mei “V.V” Yamaguchi to claim the inaugural ONE Women’s Atomweight World Championship back in May 2016, the Singaporean-American has successfully defended the belt against Jenny “Lady GoGo” Huang, Istela Nunes, Yamaguchi once more, and then strawweight queen “The Panda” Xiong Jing Nan last October.

Lee has been particularly lethal with her grappling repertoire, fusing her wrestling skills with her Brazilian Jiu-Jitsu black belt expertise to finish off both Nunes and Xiong.

Additionally, her improved Muay Thai striking – which she developed under the guidance of the World Champion instructors at Evolve – has paid dividends, especially in her destruction of Huang.

The 24-year-old Lee owns great endurance too, as she has fought deep into the championship rounds on multiple occasions in her five-year professional career. It will take someone special to dethrone the atomweight queen, but there are contenders who could be up for the challenge.

Denice “The Menace” Zamboanga has earned the right to challenge Lee, and she might just be the woman to take the belt. After all, she has consistently found a hole in every opponent’s game and cleverly exploited it.

Then in February, she avoided Yamaguchi’s slick BJJ tricks, roughed her up with punches on the ground, and battered her with boxing on the feet to earn another unanimous decision win. By pummeling the two-time ONE World Title challenger, “The Menace” rightfully earned the #1-contender spot.

However, Zamboanga accepted another bout because she wanted to further prove that she deserves to fight for the gold – and she succeeded, decimating Watsapinya “Dream Girl” Kaewkhong in just 88 seconds at ONE: A NEW BREED on Friday night.

Following that destruction, “The Menace” seems ready for anything Lee throws her way in the upcoming ONE Women’s Atomweight World Title fight.

A pair of Chinese athletes are making their marks in the upper echelon of the women’s atomweight division.

Meng Bo, the division’s #2-ranked contender, is a Chinese Mixed Martial Arts Champion with solid wrestling and boxing backgrounds. She holds a 14-5 professional record, owns a victory over Weili Zhang, and quickly knocked out Laura “La Gladiadora” Balin in her ONE debut.

To date, the Changsha native has only shown the global fan base a mere glimpse of her skill set, but her technique already looks polished and her boxing appears crisp. 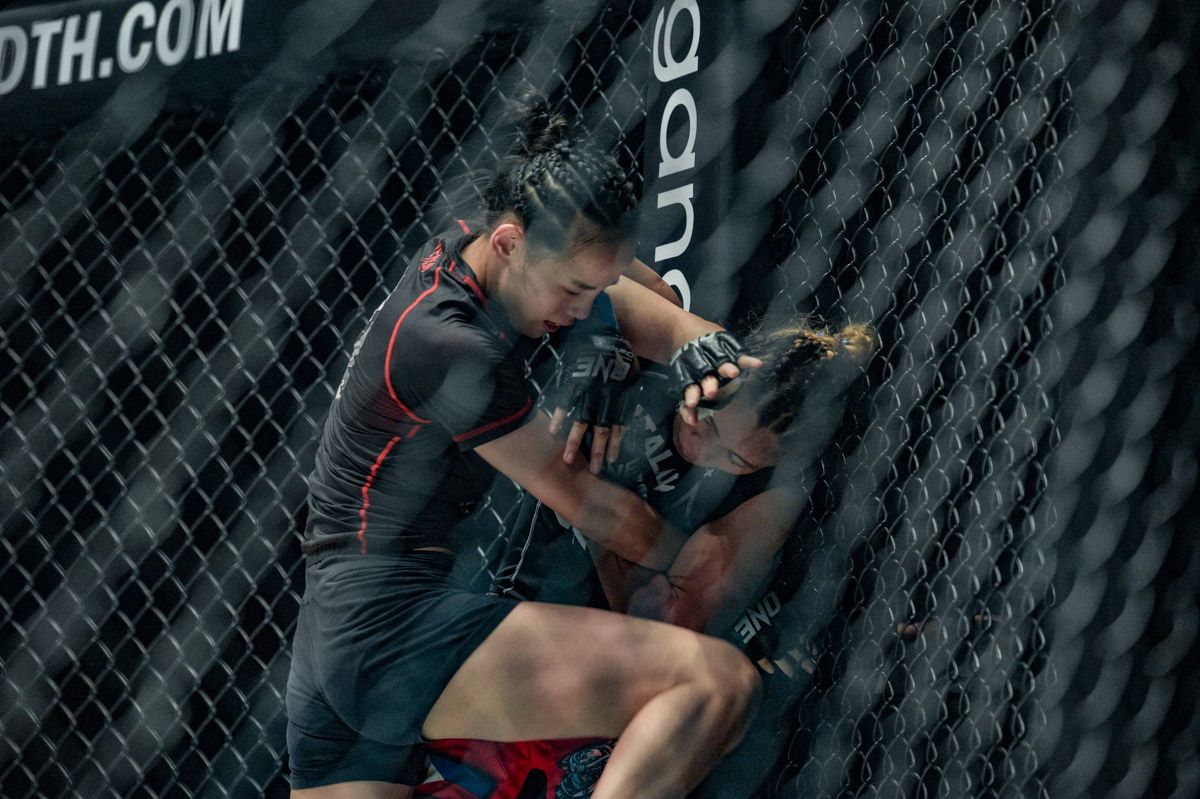 Right below Meng in the #3-contender spot is her compatriot “MMA Sister” Lin Heqin.

Lin is a sanda specialist who holds a 17-2-1 professional record. She brilliantly displayed her skills in March 2019 when she became the first woman to finish Jomary “The Zamboanginian Fighter” Torres, which she accomplished via triangle choke in the first round.

It may only be a matter of time before one of these ladies challenges for the gold, and when they do, they’ll have the opportunity to become the second ONE World Champion from China (after Xiong Jing Nan). 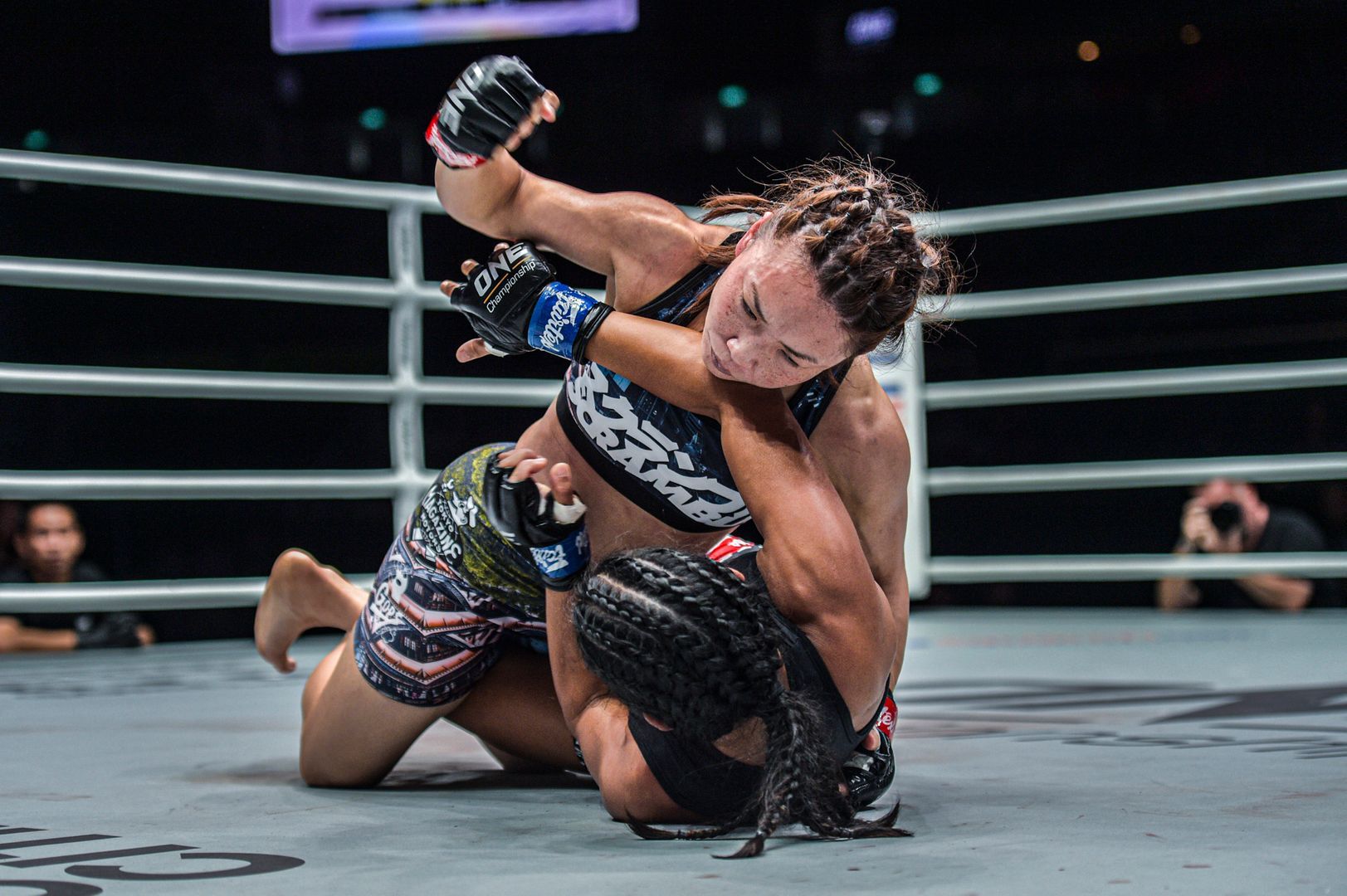 After those top three contenders, Yamaguchi could be just a few wins away from challenging Lee again.

The Japanese veteran has gone the distance with “Unstoppable” twice, and though she fell short on both occasions, their bouts always stole the show.

In fact, Yamaguchi came achingly close in a pair of five-round affairs, even dropping the Singaporean-American with a cross in their initial encounter four years ago.

“V.V” has heavy hands, owns a world-class BJJ game, consistently applies pressure, and is durable, too. Perhaps the third time could be the charm against Lee.

The Contenders Of Tomorrow

Further down the totem pole are a number of talented athletes who are experts in a single discipline and are looking to round out their mixed martial arts skill sets. Perhaps one of them could become a top atomweight contender in the not-so-distant future.

Judo specialist Itsuki “Strong Heart Fighter” Hirata is perfect in mixed martial arts competition. The rising Japanese star owns a 6-0 professional record and has finished every opponent who’s stood across from her.

Also, former two-sport ONE World Champion Stamp Fairtex has brilliantly applied her elite Muay Thai and kickboxing skills to the all-encompassing sport, where she has dominated her opponents and racked up a spotless 5-0 record so far. 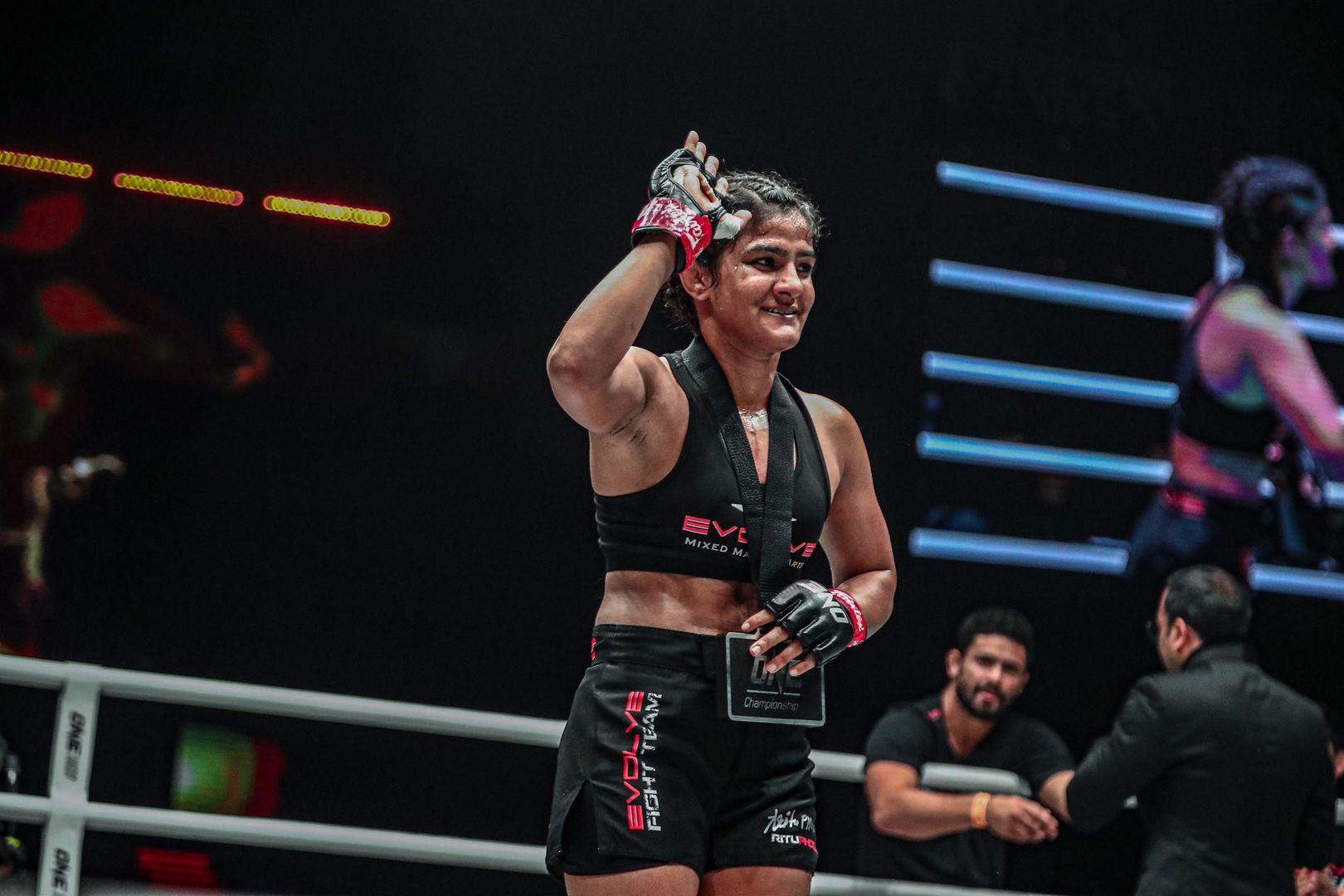 Ritu “The Indian Tigress” Phogat owns a clean 2-0 slate. The Indian Wrestling Champion is the least experienced of this bunch, but she has stifled her two foes with masterful grappling while thrilling in the Circle.

Finally, a pair of wushu warriors are evolving rapidly.

Malaysia’s Radzuan has added a dynamic ground repertoire to complement her striking arsenal. She currently sits at 5-2, but she’s only just beginning to face the top tier of fighters in the division.

The same could be said for Priscilla Hertati Lumban Gaol. The Wushu World Champion Medalist from Indonesia continues to prove herself in every outing while putting on ‘Fight Of The Night’ type of performances. She, too, has added explosive wrestling and submission attacks to her arsenal, and she has won seven of her past nine contests.

Just like her old rival, “Shadow Cat,” Lumban Gaol could sneak into the top five of the division quite soon.