No matter what the sport, everyone loves witnessing an epic comeback, showcasing how someone can defy the odds, and persevere through sheer grit and determination to ultimately prevail.

While all of the heroes competing at ONE: KINGS & CONQUERORS in Macao on Saturday, 5 August, have the ability to thrill and excite the crowd, there are some in particular who stand out with their incredible warrior spirit.

The following seven athletes were once on the brink of failure, but they hung tough, seized their destinies, and fought back to snatch victory from the jaws of defeat.

Fate can be a funny thing. Adriano Moraes was originally expected to face Kairat Akhmetov in Macao in August 2016 for the ONE Flyweight World Championship, but “The Kazakh” suffered a back injury, and the bout fell through.

Moraes was then scheduled to take on Andrew Leone for the interim title instead, but those plans were scuttled when Leone also fell to a back injury, forcing him to withdraw. In the end, Moraes’ eventual opponent in Macao was Tilek Batyrov, whom he submitted to capture the ONE Interim Flyweight World Championship.

One year later, all three of them are finally competing in Macao – Moraes and Akhmetov square off to unify the ONE Flyweight World Titles, while Leone fights Bibiano Fernandes for the ONE Bantamweight World Championship.

Both Akhmetov and Leone fought back from career-threatening back injuries, and are back in action against all odds at the very pinnacle of martial arts. All that remains is for them to win at ONE: KINGS & CONQUERORS, and complete their cage comeback stories.

Adriano Moraes At ONE: UNION OF WARRIORS

Adriano “Mikinho” Moraes is no stranger to comebacks himself. Once abandoned as a baby, Moraes had a second chance at life after he was fortunately adopted by a kind soul.

He later lost his ONE Flyweight World Championship to undefeated kingpin Akhmetov at ONE: DYNASTY OF CHAMPIONS (BEIJING II) in November 2015, in a split decision that could have gone either way.

The Brazilian accepted the result, but was immediately on a quest to recapture glory. In his first match back, however, he was nearly stopped in his tracks by flashy Filipino striker Eugene Toquero. 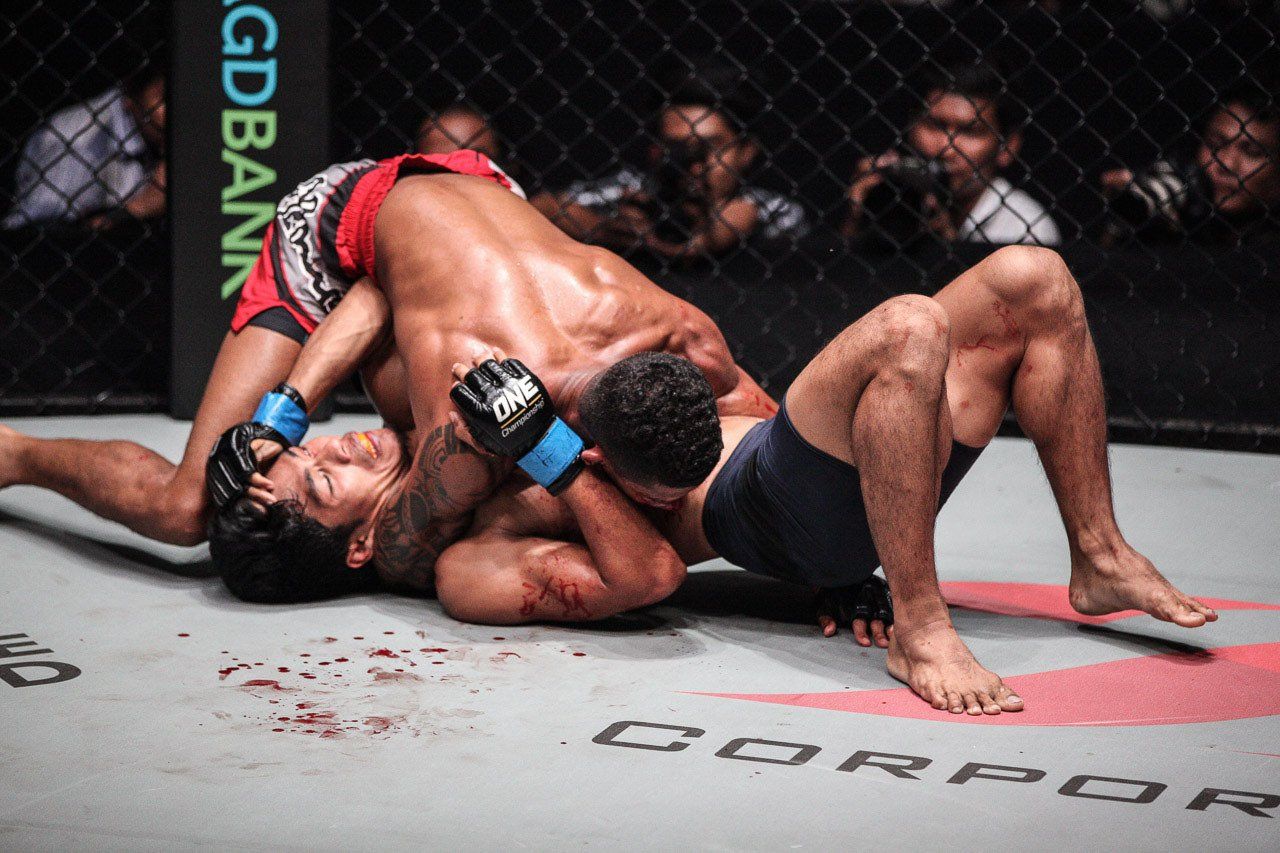 At ONE: UNION OF WARRIORS in March 2016, Toquero nearly took Moraes’ head off with a flying knee in the first round. The former champ backpedaled to the cage fence on wobbly legs and ate another knee, but muscle memory kicked in, and he instinctively took the Filipino down and worked on a choke.

Once on the ground, the BJJ black belt systematically secured a D’arce choke, eventually submitting Toquero with seven seconds left in the first round, completing the stunning turnaround.

In his very next bout, Moraes reclaimed gold with the ONE Interim Flyweight World Title, and now looks to defeat Akhmetov in a rematch to become the undisputed ONE Flyweight World Champion.

Saiful Merican At ONE: THRONE OF TIGERS

Saiful “The Vampire” Merican may have had a quiet 2016, but he was determined to make 2017 a year to remember.

The Malaysian bantamweight met Filipino striker Burn “Hitman” Soriano at ONE: THRONE OF TIGERS in Kuala Lumpur, and was in quite a bit of trouble in the early going.

Despite Merican scoring on some hard kicks, “Hitman” secured a body lock takedown, and concentrated his damage on the ground. The Filipino maintained the offensive by sinking in a guillotine choke, and when that failed, he threatened with a kimura to sweep Merican and take full mount. Soriano dropped some heavy ground and pound, and even caught a rear-naked choke at one point. 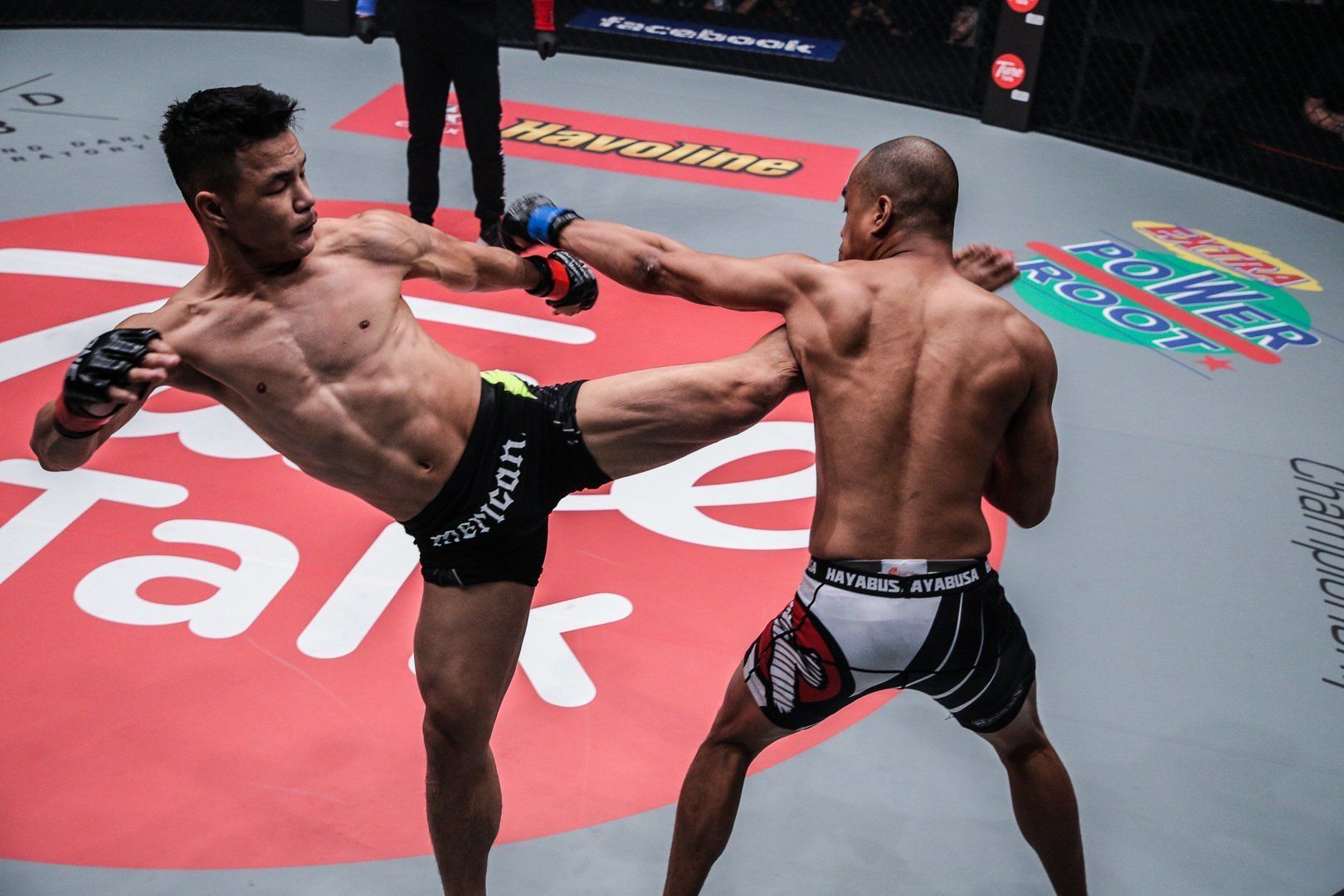 However, “The Vampire” remained composed, eventually escaped, and then let his Muay Thai prowess shine. He tore into the Filipino with strike after powerful strike. Although he made it to the bell, Soriano could not answer the call for the second round, giving the victory to Merican, whose year is now thriving.

If he can get past “Rock Man” Chen Lei in Macao, Merican’s year could only get better.

Eric Kelly At ONE: WAR OF DRAGONS

FLASHBACK: The finishing move that earned Eric 'The Natural' Kelly the US$50,000 ONE Warrior Bonus!

After Eric “The Natural” Kelly lost to Honorio Banario in a match to decide the inaugural ONE Featherweight World Champion, he needed to regain some momentum.

The Filipino wushu competitor got the ball rolling by winning at a Filipino show, and then he returned to ONE where he squared off against “Ruthless” Rob Lisita in the main event of ONE: WAR OF DRAGONS in July 2014. Needless to say, the match lived up to its billing, as it was a battle for the ages.

Lisita hammered Kelly with effective boxing, short knees and an assortment of power punches in the opening stanza. He also had several submission attempts from dominant positions, including a guillotine choke, north-south choke, and heel hook. 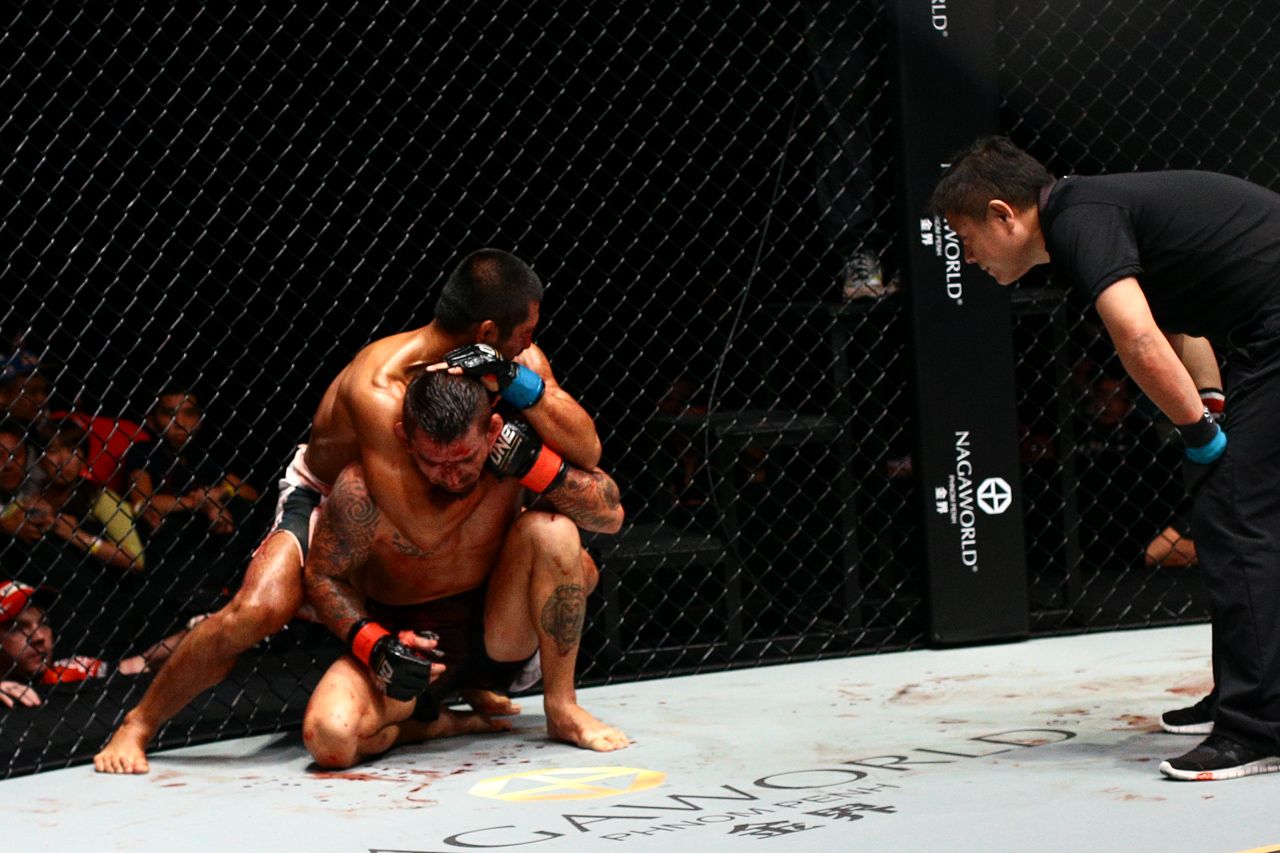 The Aussie continued to wear his rival down in the second round, but fatigue soon set in. After a failed rear-naked choke attempt, he slid off, and Kelly came to life. The Filipino evaded Lisita’s late-round takedown attempt, and slowly snuck in a rear-naked choke of his own. Lisita had no choice but to tap.

Having showed he has what it takes to absorb punishment before dishing out some of his own, Kelly will bring that toughness to Macao when he faces former ONE Lightweight World Champion Kotetsu Boku.

Shannon Wiratchai At ONE: WARRIOR KINGDOM

Thai mixed martial arts pioneer Shannon “OneShin” Wiratchai is one of the most exciting competitors in Asia, even if he has to take a few shots at his own expense.

The 28-year-old lightweight continues to add thrilling finishes to his title campaign, but his toughness and composure were put to the sword in his most recent match.

Back in March, he met Richard “Lionheart” Criminal at ONE: WARRIOR KINGDOM in his hometown of Bangkok. Once the opening bell rang, Wiratchai was immediately on the attack and rushed forward with an assortment of flashy strikes. 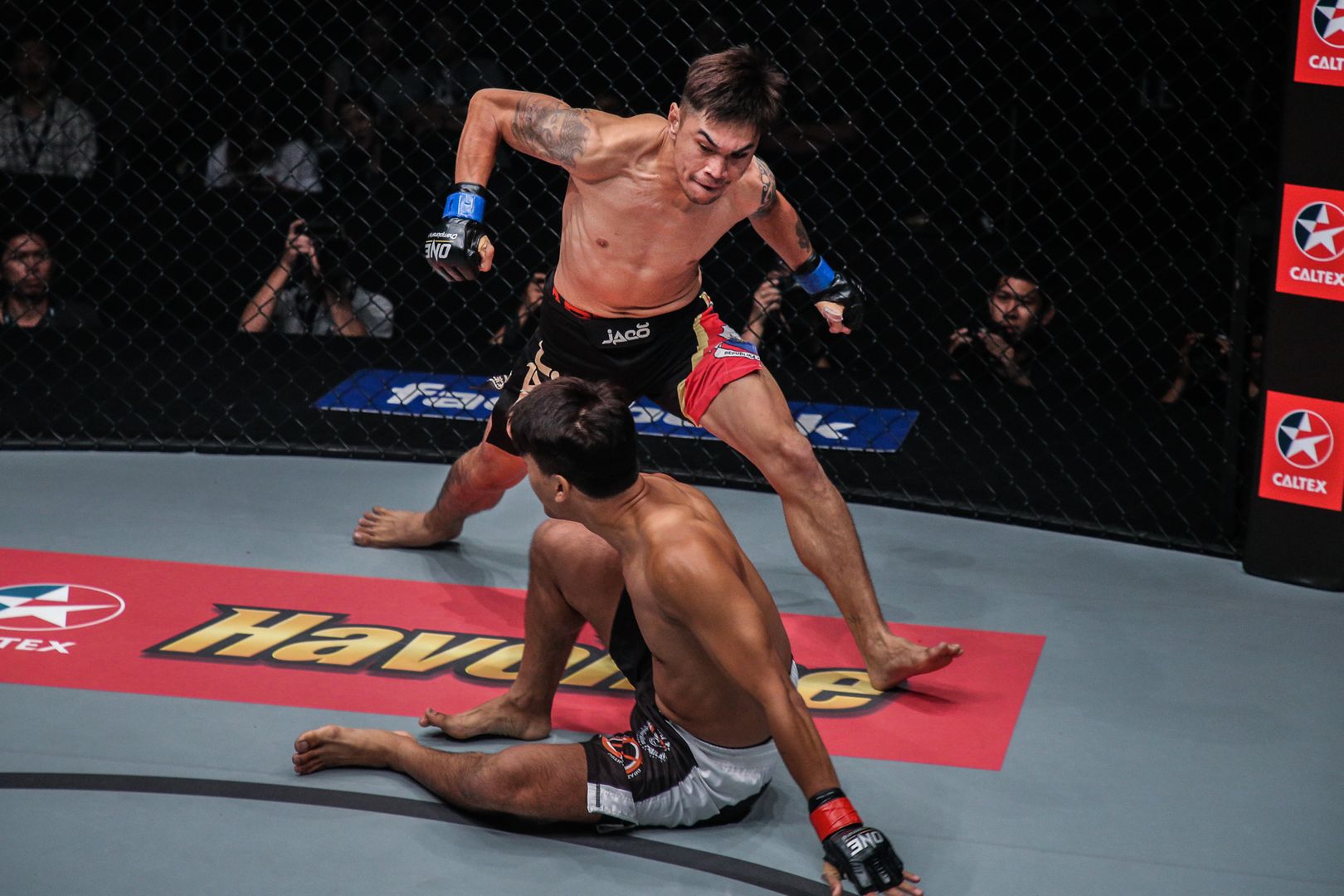 Corminal, however, wasn’t going down easily. He picked his moment, and dropped “OneShin” with a clean right punch before pouncing for the finish.

“OneShin” spun around and fortunately survived. However. It seemed as if the punch woke him up, because the Thai got back to work, hammering “Lionheart” with a slew of hooks and other offensive strikes to earn a comeback KO.

Now, Wiratchai draws Lisita in Macao, which is shaping up to be a stand-up war for the ages.

Chen Lei At ONE: DYNASTY OF HEROES 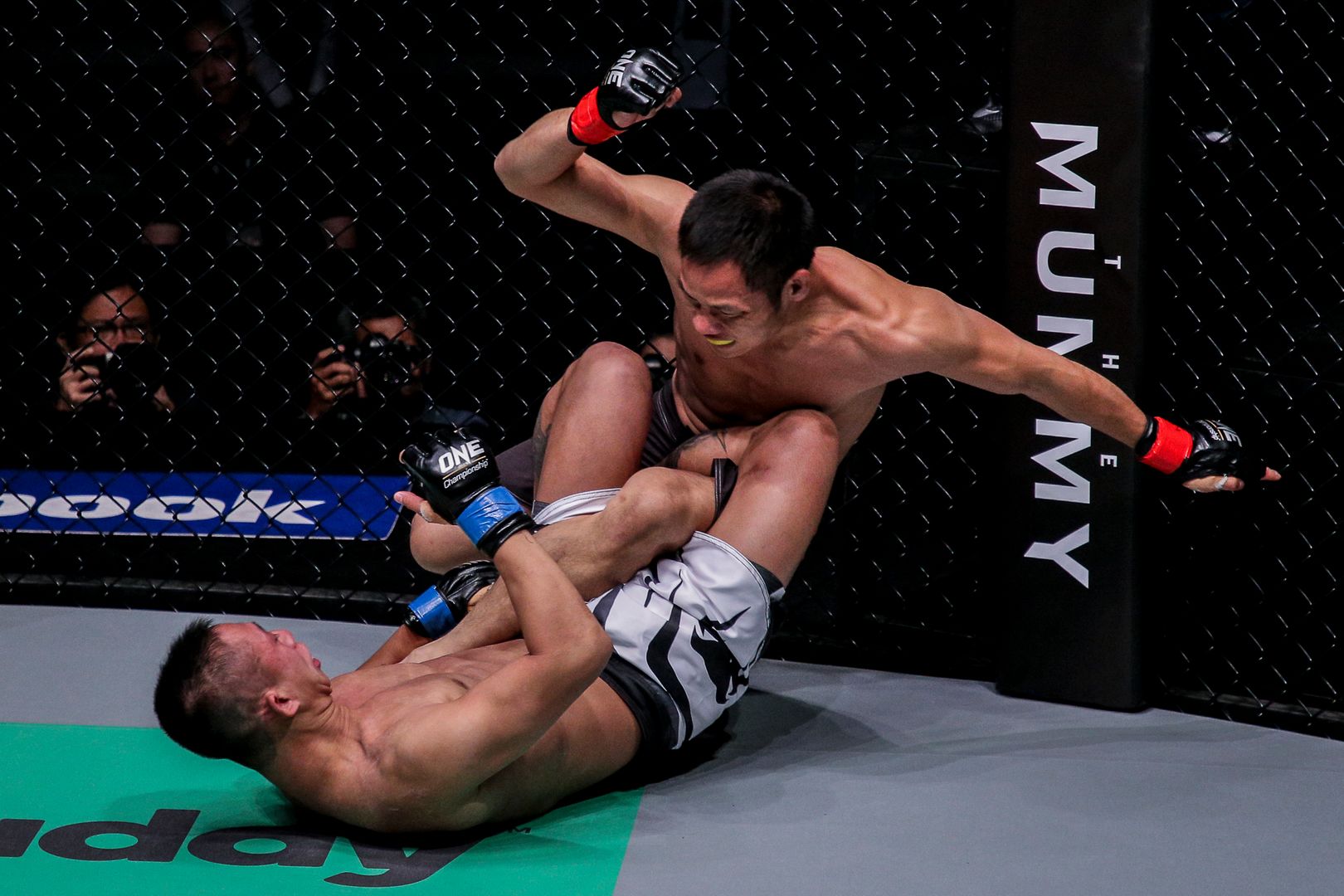 “Rock Man” Chen Lei may have entered ONE Championship as a relative unknown, but he exited the cage in Singapore as a fierce competitor, and a talent to watch.

The 28-year-old Chinese athlete made his promotional debut at ONE: DYNASTY OF HEROES this past May against mixed martial arts newcomer Jeremy “Predator” Meciaz. The Indonesian brought with him a Brazilian jiu-jitsu background that had found him much grappling success.

As soon as the bell rang to kick off the opening contest, Meciaz rushed Chen with a flurry of strikes, pulled scissor guard, and attempted to lock in a heel hook. At one point, it seemed Meciaz had the bout wrapped up, as Chen grimaced in pain.

Fortunately for “Rock Man,” he is well-versed in submissions too, having previously won the Shanghai Open BJJ Championship. He somehow found a way to escape, and relentlessly struck the Indonesian until he was free. 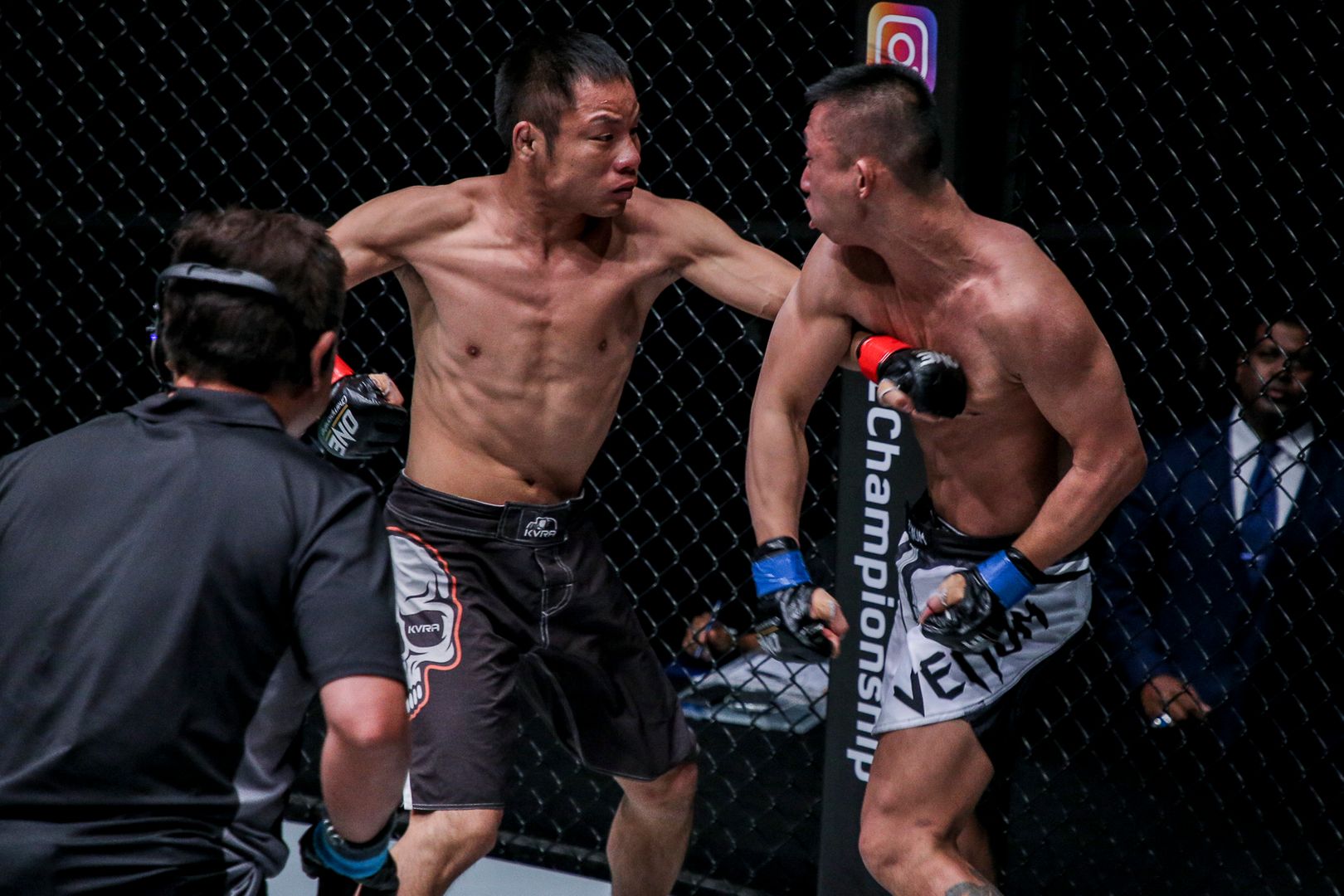 When the two stood back up, Chen started hitting the inexperienced and exhausted “Predator” at will. Meciaz would again pull guard, but “Rock Man” evaded, and rained down punches until the referee waived the contest off.

Chen now gets Merican in Macao, in what is also bound to be an electrifying battle not to be missed.