The heroes of ONE Championship are on a never-ending quest to achieve immortality. This coming Friday, they will get a chance to accomplish just that. On 24 November, ONE Championship’s finest will showcase their skills at ONE: IMMORTAL PURSUIT, live from the Singapore Indoor Stadium.

The blockbuster main event features ONE Welterweight World Champion Ben Askren defending his belt for the last time against former ONE Lightweight World Champion Shinya Aoki, in a legend versus legend retirement bout. Also, there is a thrilling co-main event pitting knockout king Amir Khan against the hard-hitting Adrian Pang.

With such an action-packed card, the athletes will be sure to deliver plenty of highlight reel moments. Here are 10 outstanding finishes from the athletes who will be competing at ONE: IMMORTAL PURSUIT.

This past September, Ben “Funky” Askren extended his undefeated streak, and continued his reign of dominance when he met Swedish striker Zebaztian “The Bandit” Kadestam at ONE CHAMPIONSHIP: SHANGHAI.

The American immediately grounded his foe, mounted him, and constantly looked for the finish through submission or heavy ground and pound. Kadestam was a game opponent, but could not escape the Olympic wrestler’s grasp. After a valiant effort, he finally succumbed to Askren’s melee of ground strikes at the 4:09 mark of the second round.

A master class from ONE of the all-time greats!

Posted by ONE Championship on Thursday, November 16, 2017

One of Shinya Aoki’s most impressive victories happened in August 2014 at ONE: REIGN OF CHAMPIONS, when the former ONE Lightweight World Champion defended his title against Iranian wrestler Kamal Shalorus in a battle of elite grapplers.

Aoki immediately rushed in for the takedown, and succeeded with a sneaky leg trip. As Shalorus tried nullifying his attack, the Japanese athlete cleverly repositioned himself into full mount. The Iranian turned to get out, but Aoki transitioned to his back and strategically secured the rear-naked choke. He got the tap at 2:15 of round one.

He registered yet another knockout to his name.

He registered yet another knockout to his name.Singapore | 24 November | TV: Check local listings for global broadcast | PPV: Official Livestream at oneppv.com | Tickets: http://bit.ly/onepursuit17

Singapore’s own Amir Khan made history this past September at ONE CHAMPIONSHIP: SHANGHAI, when he knocked out Czech warrior Jaroslav Jartim. It was an incredible display of striking, as Khan delivered a perfectly-timed head kick to Jartim, followed by a right cross which sent him crashing to the canvas. That caused the referee to wave off the bout at 3:46 into the opening stanza.

With the knockout, Khan set the record for most knockouts in ONE history at seven. There is no doubt he hopes to extend that to eight this Friday.

His hunt for greatness continues.

Posted by ONE Championship on Sunday, November 12, 2017

Adrian “The Hunter” Pang may be known as a BJJ black belt, but he can knock people out, too. He did just that at ONE: TIGERS OF ASIA in October 2015, when he took out Peter Davis in his adopted hometown of Kuala Lumpur, Malaysia.

The calm Australian took the center of the cage, held a tight stance, and clipped his Malaysian foe with a one-two. Davis quickly recovered and threw a lunging punch, but Pang evaded, unloaded with punches, and dropped Davis with a left hook. That ultimately led to a 48-second KO.

Mei “V.V.” Yamaguchi may have lost a few heartbreakingly close decisions, but in June 2017, she took it out of the judges’ hands, and showed the entire world why she is the top contender for the ONE Women’s Atomweight World Championship.

The Japanese athlete outstruck and outgrappled Taiwan’s Jenny Huang at ONE: LIGHT OF A NATION, and submitted “Lady GoGo” via rear-naked choke in the second round. Yamaguchi will attempt to display her world-class grappling and powerful right hand against Gina Iniong this Friday. 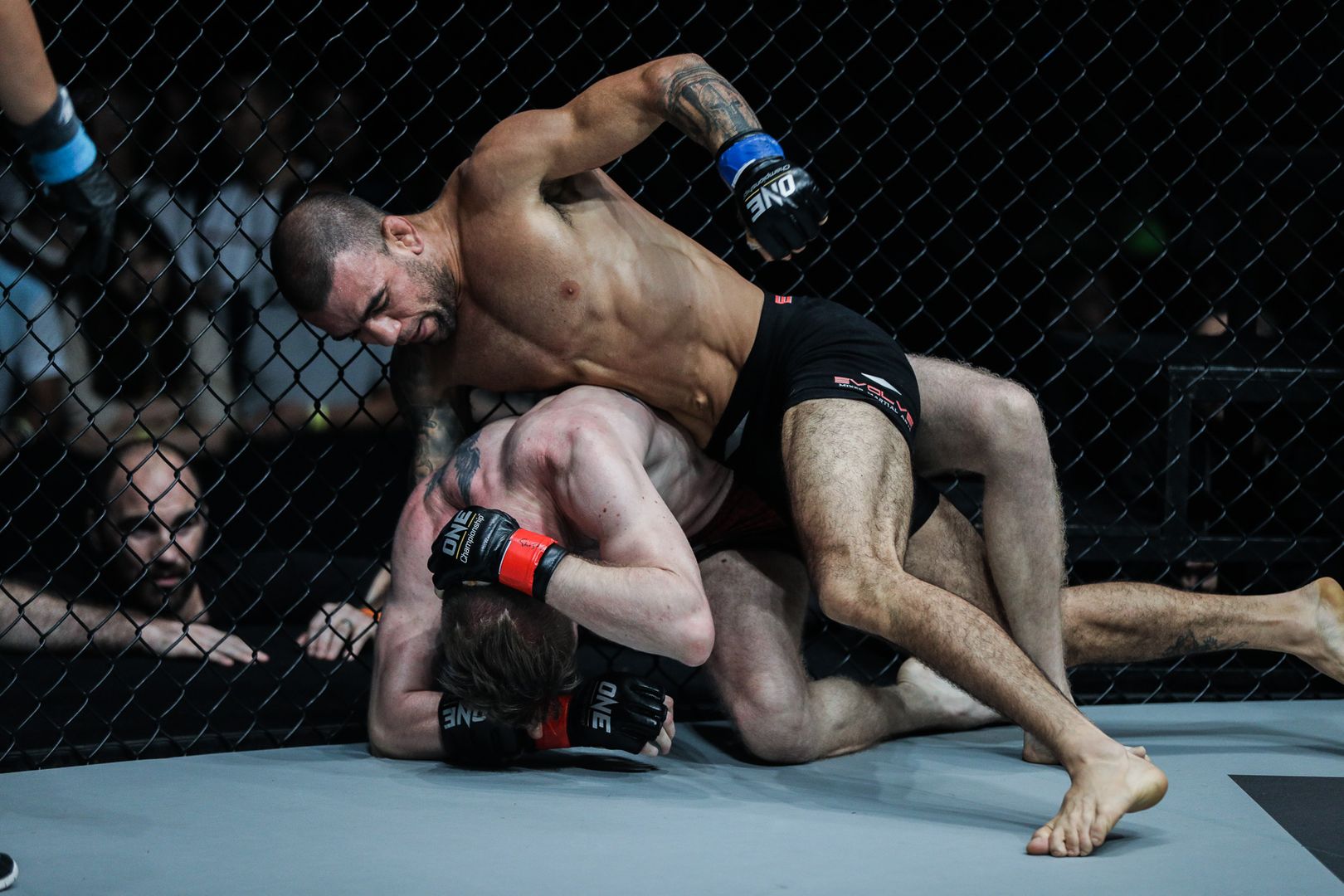 Singapore-based Brazilian Leandro “Brodinho” Issa made an epic return to the organization this past August at ONE: KINGS & CONQUERORS, and flashed his vastly improved arsenal against Finnish ground specialist Toni “Dynamite” Tauru.

Issa, a BJJ world champion, peppered Tauru with strikes, wrestled him to the mat with masterful takedowns, and constantly rattled the Finn with fierce ground strikes. He would stop Tauru via strikes at the 1:36 mark of round two.

Now, he gets another former ONE Bantamweight World Title challenger in Dae Hwan Kim. 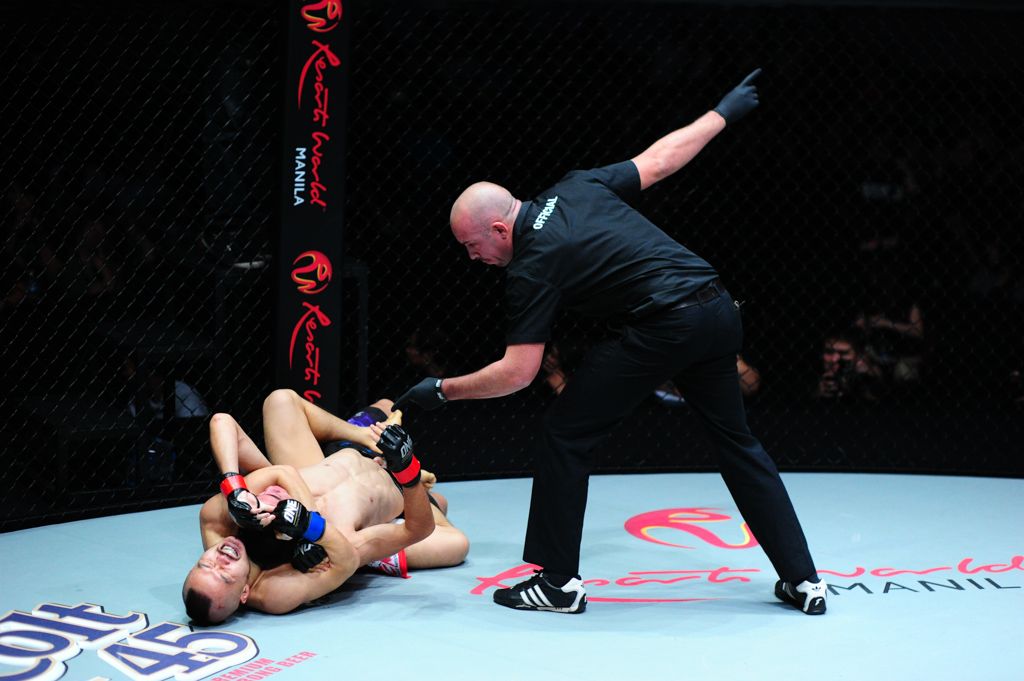 Back in 2013, “Ottogi” Dae Hwan Kim made a statement in his promotional debut against Australia’s Thanh Vu at ONE: MOMENT OF TRUTH.

Dae, then undefeated, took it to Thanh Vu later in the second frame, as he pummeled him with knees, kicks, and punches. The South Korean then brought his opponent to the mat, continued scoring with strikes from the full mount position, and soon after his foe gave up his back, submitted him with a rear-naked choke.

“Ottogi” is eyeing a rematch with ONE bantamweight king Bibiano “The Flash” Fernandes, the only man to defeat him. Before that happens, however, he must prevail over Issa.

It's not over till it's over.

It's not over till it's over. Singapore | 24 November | TV: Check local listings for global broadcast | PPV: Official Livestream at oneppv.com | Tickets: http://bit.ly/onepursuit17

Posted by ONE Championship on Tuesday, November 14, 2017

Singapore’s Olympic swimmer “Mighty” May Ooi is proving to have brought her incredible athletic pedigree to the cage as well. The capoeira exponent made a thrilling promotional debut against Malaysia’s Ann Osman at ONE: QUEST FOR GREATNESS in August.

It was a back-and-forth affair, with Osman dropping Ooi in the early going. However, the Singaporean recovered, and shifted her body in a scramble to take Osman’s back before locking in the rear-naked choke nearly three and a half minutes into round one.

Ooi’s hunger for the inaugural ONE Women’s Strawweight World Title will intensify if she defeats Cambodia’s Vy Srey Khouch this Friday. 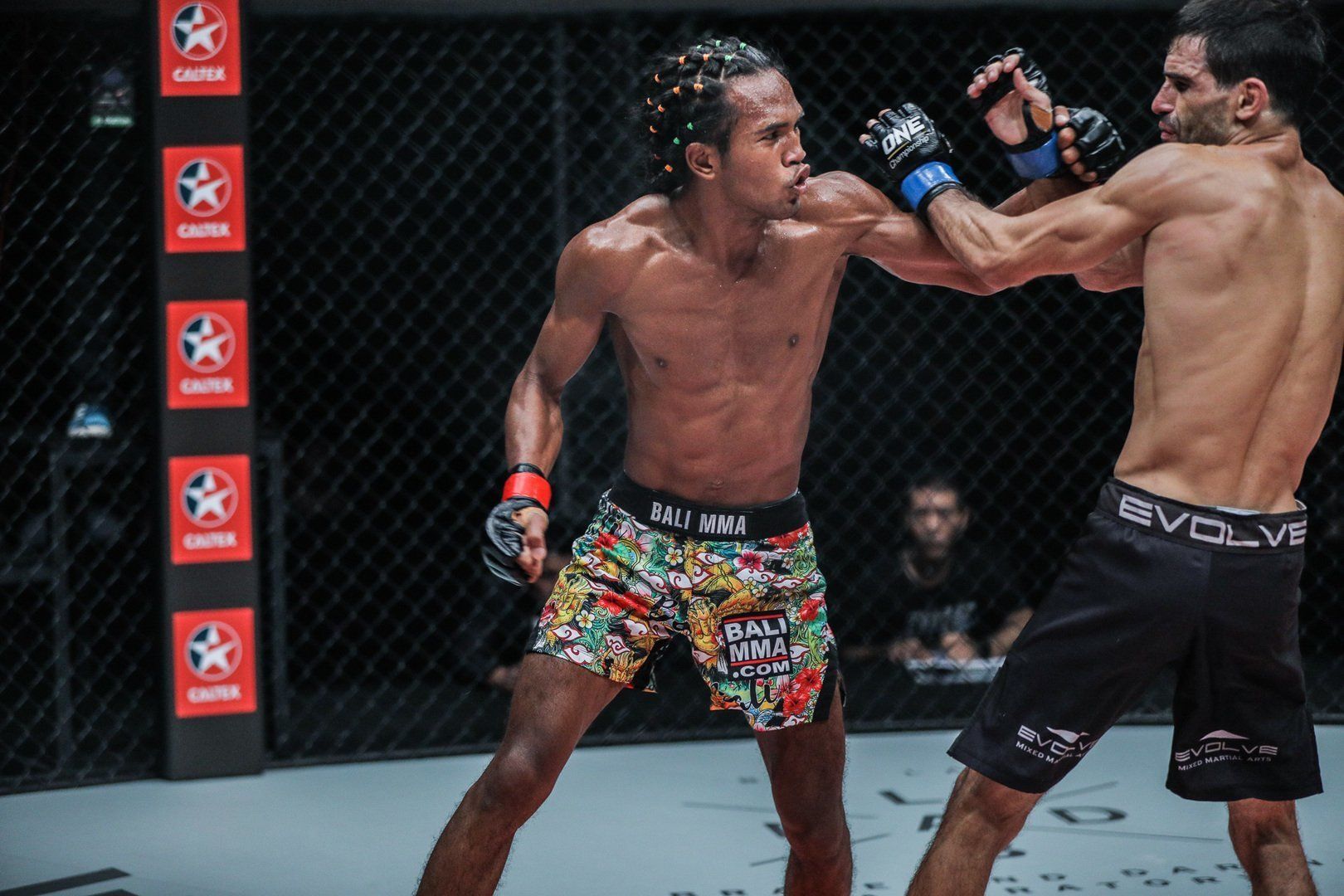 “Jungle Cat” Muhammad Aiman has quickly become one of the most exciting talents in the organization’s flyweight division.

The Malaysian is a dynamic martial artist who constantly pushes the pace, and he demonstrated that in front of his countrymen in Kuala Lumpur this past February at ONE: THRONE OF TIGERS.

“Jungle Cat” pounced on Novaes, a Brazilian BJJ black belt and champion, using his well-rounded skill set to score the TKO halfway through the second round. Now, he meets China’s Yang Fei in Singapore. 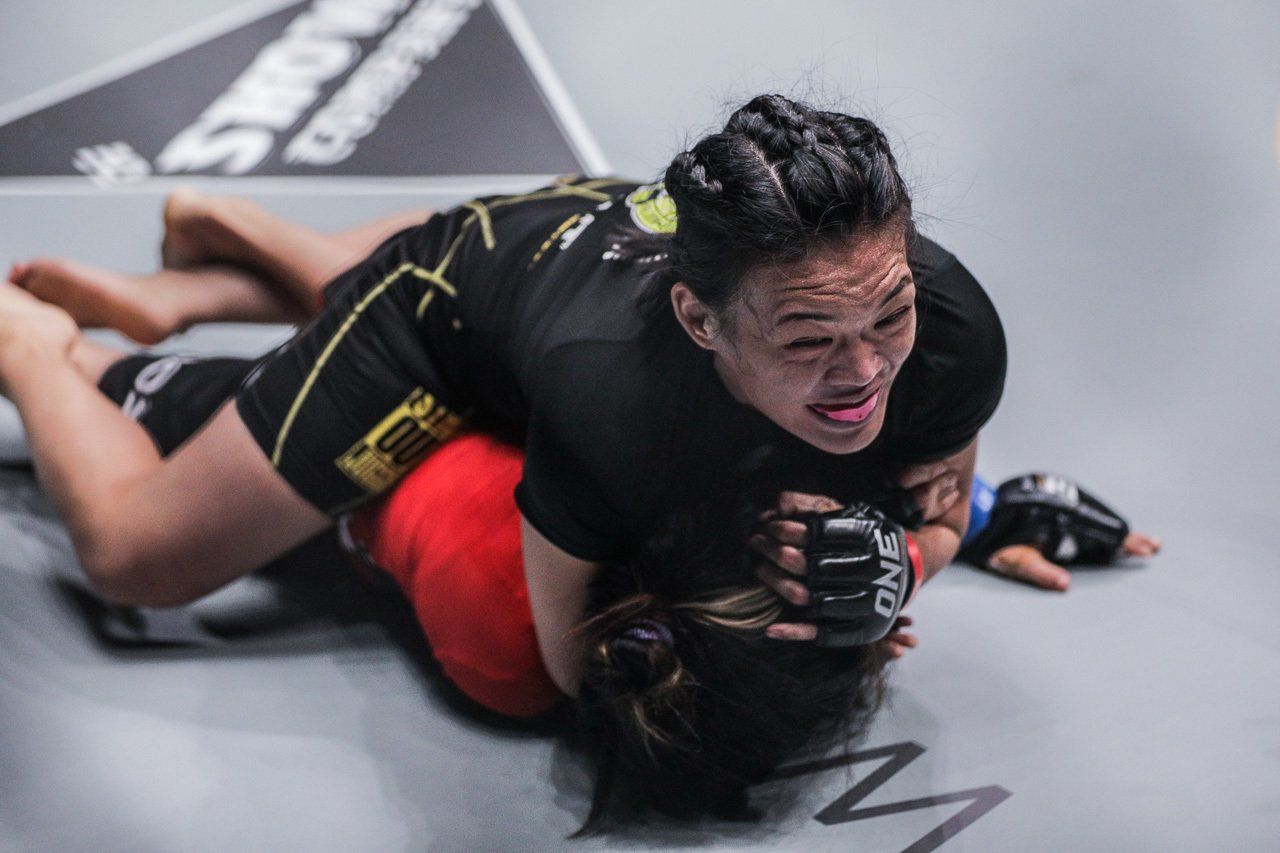 Tiffany “No Chill” Teo is known to maintain a vigorous pace and, in her promotional debut at ONE: DEFENDING HONOR in November 2016, Egypt’s Walaa Abbas learned that the hard way.

Although a bit tense, Teo, a Singaporean boxing champion, did a terrific job of blending her strikes with takedowns, which often frustrated the Egyptian. While Abbas escaped a rear-naked choke in the first round, she did not in the second, and tapped out at the 4:15 mark.

Teo will look to make her hometown proud when she faces India’s Puja Tomar on Friday. 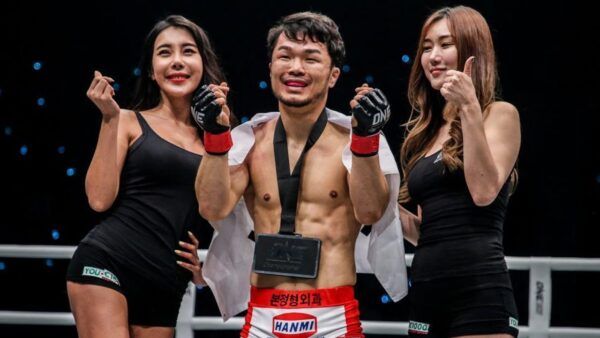