ONE Championship has stacked its final event of 2019 in Manila, Philippines, with some of its most exciting submission hunters to close the year in style.

Many of these athletes on the bill at ONE: MASTERS OF FATE started out as strikers, but they have evolved and grown as competitors on the global stage, and are now as feared on the ground as they are on their feet.

Before they enter the Circle on Friday, 8 November, take a look at seven of their finest finishes to see what they are capable of if their match-ups hit the canvas at the Mall Of Asia Arena.

#1 The Unveiling Of The Passion Lock

Filipino hero Joshua “The Passion” Pacio debuted his famous “Passion Lock” when he surprised an unsuspecting Pongsiri “The Smiling Assassin” Mitsatit at ONE: REIGN OF KINGS last year.

Mitsatit’s defense was on point when the Team Lakay star took his back and looked for a rear-naked choke, but Pacio had another trick up his sleeve.

He used his left hand to trap “The Smiling Assassin’s” left arm, took a two-on-one grip, and used the extra strength to force Mitsatit’s arm behind his back. From there, he cranked it towards his head for a unique shoulder lock and a stunning victory.

Though he started his martial arts journey in stand-up arts, Rene “The Challenger” Catalan has become a force on the ground, and he showed this when he submitted Adrian “Papua Badboy” Mattheis at ONE: QUEST FOR POWER.

The Wushu World Champion took his Indonesian rival down in the second stanza, and scored with strikes from side control before he saw an opportunity to go for the finish.

He moved to a north-south position and scooped up Mattheis’ right arm, before he spun quickly and isolated the limb between his legs. He stuffed “Papua Badboy’s” limb deep into his armpit and extended his hips to get the tap.

The Filipino veteran will challenge Pacio for his ONE Strawweight World Title in Manila.

Toni “Dynamite” Tauru is a grappling specialist, so he wasted no time in dragging Geje “Gravity” Eustaquio to the canvas at ONE: AGE OF DOMINATION with a single-leg takedown.

From there, he controlled the Team Lakay man expertly with a body triangle and attacked the neck. With around 90 seconds remaining in the round, the Finnish athlete trapped his rival’s right arm with his leg, which allowed him the opportunity to lock up a slick rear-naked choke with little resistance.

“Dynamite” will hope to repeat this result when these athletes rematch in front of “Gravity’s” compatriots at ONE: MASTERS OF FATE.

Stamp Fairtex gave an incredible showing in her mixed martial arts debut on the global stage at ONE: DREAMS OF GOLD, as the ONE Women’s Atomweight Muay Thai and Kickboxing World Champion showed that she is more than just a striker.

After two rounds of domination, the Thai star initiated the finishing sequence by taking Asha “Knockout Queen” Roka to the canvas early in round three, where she moved straight to mount and dropped hard elbows.

Roka reacted by giving up her back, and Stamp softened her up some more with punches, before she slid her left arm under “Knockout Queen’s” neck to squeeze her into submission.

Another big-hitter showcased his grappling prowess at ONE: QUEST FOR GOLD, as “The Underdog” Li Kai Wen dispatched Roel “Akiyama” Rosauro with a submission after just 43 seconds.

The Chinese athlete clubbed his rival with hard punches in the early exchanges, which forced Rosauro to attempt a desperate takedown, but Li sprawled hard on the sloppy double-leg, and instantly cinched up a tight guillotine choke. He thrust his hips forward and pulled up with his hands to get the tap seconds later.

“The Underdog” has a tough test in Paul “The Great King” Lumihi in his next outing.

Former ONE Strawweight World Champion Yoshitaka “Nobita” Naito defended his belt for the first time with a great display of grappling when he met Joshua Pacio at ONE: STATE OF WARRIORS.

The Japanese athlete’s big breakthrough came in the third round when he forced Pacio against the fence with a single-leg takedown attempt, and then span around to the young Filipino’s back.

Before “The Passion” had any time to adjust, “Nobita” had locked on a lightning-fast rear-naked choke that ended the contest.

Naito will square off against Thai striker Pongsiri Mitsatit next Friday.

#7 “The Ilonggo” Matches His Brother

Robin “The Ilonggo” Catalan followed his brother’s lead with an impressive victory over Adrian Mattheis at ONE: BATTLE FOR THE HEAVENS, but this effort may have been even better.

The 29-year-old from Manila chopped away with punches and elbows from inside his opponent’s guard, but then seized an opportunity to sit back for a leg lock and surprise his Indonesian opponent.

As “Papua Badboy” tried to make space with his left knee, Catalan laced his right leg over the hip to isolate the limb, and then torqued on the heel to elicit the tap.

“The Ilonggo” will meet Cuban wrestler Gustavo “El Gladiador” Balart in a fascinating strawweight tussle at ONE: MASTERS OF FATE. 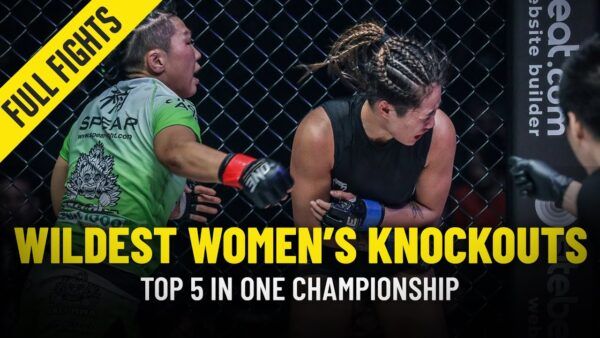