ONE: AGE OF DRAGONS will host an incredible amount of knockout artists in Beijing, China on Saturday, 16 November.

The bout card, which has two ONE Kickboxing World Title bouts at the top of the bill, features some of the heaviest-hitting competitors on the global stage from Muay Thai, kickboxing, and mixed martial arts.

They are all ready to unleash their powerful arsenals inside the Cadillac Arena, just like many of them have done before on the global stage.

These are the top five finishes by these striking superstars.

Ilias “Tweety” Ennahachi blasted his way to the ONE Flyweight Kickboxing World Title with a debut victory over Petchdam “The Baby Shark” Petchyindee Academy at ONE: DREAMS OF GOLD.

The defending World Champion was in incredible form in the run-up to his first defense against his Dutch-Moroccan rival, but Ennahachi took the Thai’s best shots to land his own heavy punches.

In the third round, the 23-year-old really started to unload with his hands. A hard left wobbled Petchdam, and the follow-up shots dropped him for the first time. “Tweety” kept up the pressure after his rival beat the referee’s count, and a volley of hooks to the head and body finished the job.

Ennahachi will defend his flyweight crown for the first time in a rubber match with China’s Wang “Metal Storm” Wenfeng in Beijing.

It was never going to be an easy ONE debut for Luis “Soot Raaeng Geert” Regis against “The Boxing Computer” Yodsanklai IWE Fairtex in the main event of ONE: DESTINY OF CHAMPIONS.

The Thai legend started to hammer the Australian with his trademark left kick to the body and legs from the first bell. He did not back down, but Yodsanklai made him pay when he came forward with a spinning kick that missed the mark.

He pushed Regis back to the fence, and then planted a jab-cross on his jaw. As the Brazilian reeled from the shots, “The Boxing Computer” scored with three consecutive right uppercuts that dropped him face-first onto the canvas.

Yodsanklai will be back in action against Russia’s Jamal “Kherow” Yusupov at ONE: AGE OF DRAGONS.

Miao Li Tao returned after an 18-month layoff in May and scored the biggest win of his career against former ONE Strawweight World Champion Dejdamrong “Kru Rong” Sor Amnuaysirichoke at ONE: ENTER THE DRAGON.

Miao’s game plan was to wrestle with the Muay Thai World Champion in the early running, but when he saw the opening for a finish on the feet, he took it.

“Kru Rong” had already absorbed a ton of strikes, and when he tried to counter a Miao right hand with an elbow, he did not pull it back in time to defend himself. The Chinese athlete found the gap in his defense with a massive left hook that landed clean on the chin and knocked Dejdamrong out instantly.

Miao will square off against fellow heavy-hitter Jeremy “The Jaguar” Miado in front of his compatriots in China.

WHAT. A. KNOCKOUT! Tang Kai sends Sung Jong Lee crashing to the canvas at 1:14 of Round 2!

WHAT. A. KNOCKOUT! Tang Kai sends Sung Jong Lee crashing to the canvas at 1:14 of Round 2!Watch the full event LIVE & FREE on the ONE Super App ???? http://bit.ly/ONESuperApp | TV: Check local listings for global broadcast

Tang Kai’s promotional debut ended in emphatic fashion when he finished Sung Jong Lee with a left head kick at ONE: HERO’S ASCENT.

The Chinese striker could not find the right opening in the first stanza, but when Lee pressed forward at the start of round two, Tang saw his chance to finish.

As he back-pedaled away from his opponent, the man from Shanghai threw a lightning-fast left kick to the head. Though Lee had his right hand up to block it, Tang’s foot wrapped around his guard and landed below the ear.

The South Korean wobbled and then hit the mat face-first as the contest ended in an instant.

When Edward “The Ferocious” Kelly faced Meas Meul at ONE: GLOBAL SUPERHEROES, he authored one of the most memorable KOs in ONE history.

The Cambodian took aim with an inside low kick, but “The Ferocious” quickly returned with a right cross and left hook. As Meul tried to dip out of trouble, he moved straight into the path of Kelly’s right kick.

The Team Lakay star’s knee landed on his rival’s jaw and momentarily lifted the Cambodian Top Team man off his feet, before he returned to the ground with a thud.

Kelly will square off against Tang in a battle of finishers inside the Cadillac Arena. 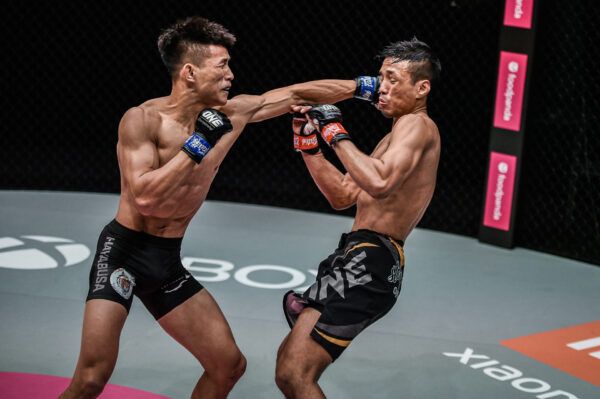