The beauty of martial arts was on full display in the Golden Land as a hero carved his name into history.

Posted by ONE Championship on Saturday, July 1, 2017

On Friday, 30 June, history was made at the Thuwunna Indoor Stadium in Yangon, Myanmar.

The “Burmese Python” Aung La N Sang became the first world champion to ever emerge from Myanmar when he defeated Vitaly Bigdash for the ONE Middleweight World Title. The main event bout capped off an action-packed night at ONE: LIGHT OF A NATION.

In addition to that momentous occasion, local prospect Saw Min Min swept through the competition to capture the ONE Myanmar Flyweight Tournament Championship, Bruno Pucci showcased his elite ground game, and Mei Yamaguchi set the wheels in motion for a title rematch of her own.

There were several memories made this past weekend in the Golden Land, but here are the top five highlights from ONE: LIGHT OF A NATION.

Aung La N Sang had the homecoming that dreams are made of. Myanmar’s favorite son returned to his birth nation to challenge Vitaly Bigdash, in a title rematch of their bout five months earlier.

While he only had nine days to prepare for their first encounter, he had almost nine weeks this time around, and showed what he was truly capable of. The “Burmese Python” was focused from the second he stepped into the Thuwunna Indoor Stadium, and once the bell rang, he was unstoppable.

The 32-year-old rocked the champion minutes into the contest, and nearly secured a first-round TKO victory. Despite being grounded by the Russian in the following stanzas, Aung La N Sang clearly did more damage in striking exchanges throughout the course of the bout. 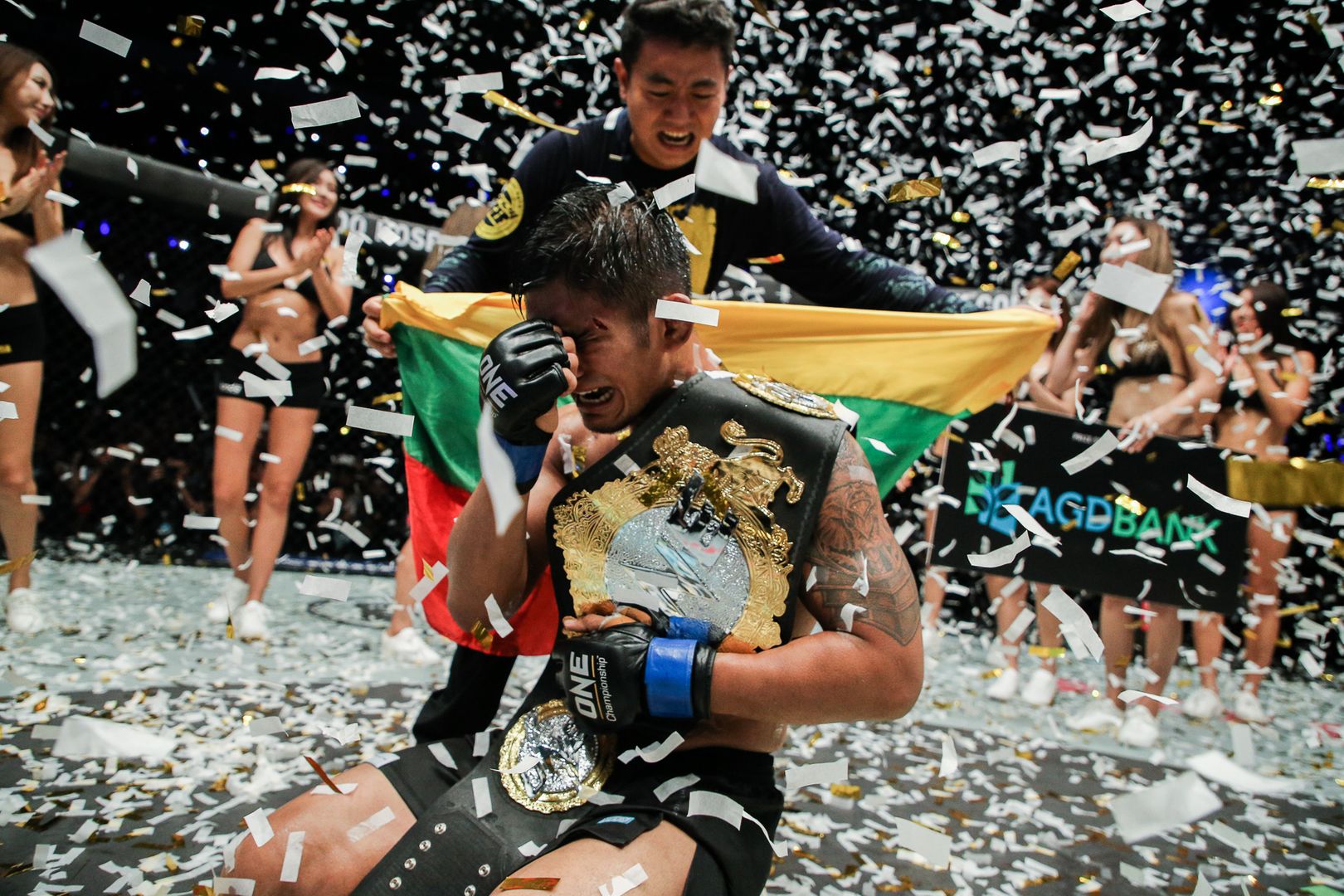 As a result, Aung La N Sang earned a unanimous decision nod, and claimed the ONE Middleweight World Championship. As confetti rained from the rafters, the crowd went into a frenzy, and the “Burmese Python” celebrated tearfully with his countrymen.

It was a special moment, not just for the new title holder, but for the entire nation of Myanmar. It was a celebration on a scale that the country had not seen in years.

Mei Yamaguchi had her back up against the wall. After losing her first two bouts in ONE Championship — a pair of thrillers against the division’s top competitors — her third outing proved to be the charm. The Japanese atomweight known as “V.V.” defeated Jenny “Lady Gogo” Huang by rear-naked choke in the second round.

Though the Chinese Taipei resident flashed some improved skills, Yamaguchi’s veteran finesse was just too much to handle. Besides finding a home for her powerful strikes, the Japanese atomweight proved to be the better of the two on the ground, putting her newly-improved Brazilian jiu-jitsu to good use. 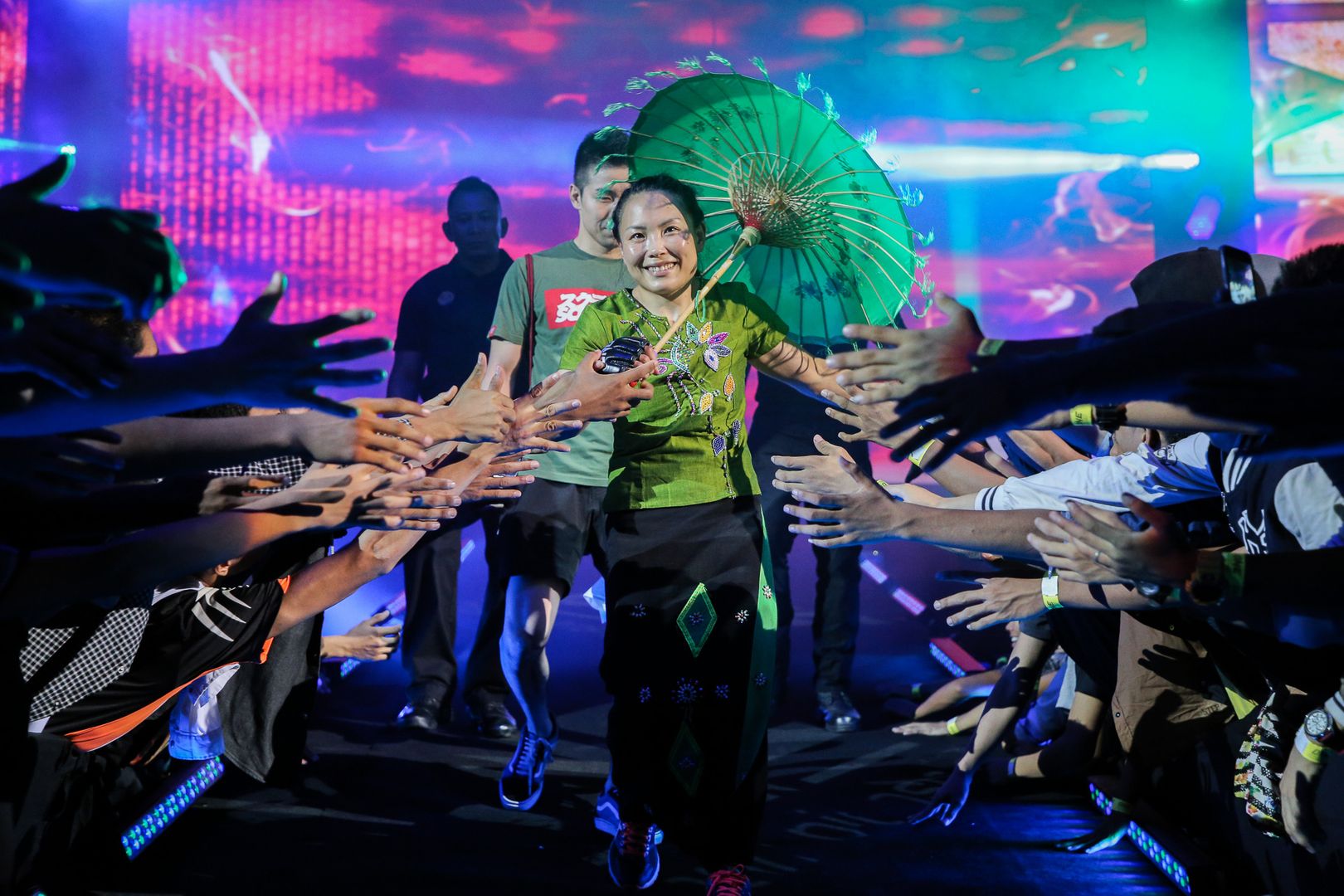 From her unique entrance in traditional Myanmar garb, all the way to the fight-ending tap, everything was working for Yamaguchi. Clearly, her hard work the past year has paid off, and now she has made a successful start to her campaign for a title rematch against ONE Women’s Atomweight Champion Angela Lee.

Lethwei champion Tha Pyay Nyo possesses an incredible amount of power in his fists. The 24-year-old demonstrated that in his short match against Htet Aung Oo, a debuting lethwei competitor who was also a Gold Belt Champion.

Within a span of 16 seconds, Tha Pyay Nyo marched towards his nemesis and threw a power jab that was blocked. Htet Aung Oo responded with a rear uppercut that completely missed, leaving his head exposed for the right cross that would drop him harder than a pile of bricks.

For Tha Pyay Nyo, the ONE Myanmar Featherweight Tournament Champion 2015, it was his fourth-consecutive KO. He could very well be Myanmar’s next big star, alongside featherweight prospect Phoe Thaw.

Bruno Pucci has endured a few difficult years. The two-time Brazilian jiu-jitsu No-Gi world champion had finally recovered from eye and back surgeries, but whatever little momentum he had disappeared when he suffered an eight-second knockout loss ten months ago.

The Brazilian known as “Puccibull” had proclaimed that he had improved his game, and on Friday, that statement came true. Although he is one of the most feared submission specialists in ONE’s featherweight division, he took Jimmy “The Silencer” Yabo to the ground, mounted him, and dominated the Filipino with a relentless ground and pound attack.

Pucci may have earned the first TKO victory of his career, but what’s most impressive is his ability to further expand his already top-notch ground game. If the Brazilian can continue to pick up new tricks, especially on the feet, he could easily find himself challenging ONE Featherweight World Champion Marat Gafurov in future.

#5 Kevin Chung Announces His Arrival On The Big Stage

An explosive start to the action in Yangon! ????TV: Check local listings for global broadcast | PPV: Official livestream at oneppv.com

Kevin Chung may be called “Oldboy,” but the promotional newcomer lived up to the moniker, as he displayed a skill set and wisdom beyond his 24 years of age. He showed a little bit of everything in his contest against China’s Zhong Qing Ya.

The South Korean threw an assortment of strikes, secured a powerful takedown, and when he was not able to lock in the rear-naked choke, re-positioned himself to side control and ended the bout with a pair of devastating knees to the side of Zhong’s head.

He may be a newcomer in ONE’s bantamweight division, but Chung is undoubtedly a talented prospect who could flourish against the world’s best. It will be exciting to see his growth as a martial artist, and possibly see him leading ONE’s planned foray into the lucrative Korean market.