The historic ONE: EMPOWER features 18 of the best female mixed martial artists, kickboxers, and Muay Thai fighters on the planet, and all of them are looking to make a lasting impression on ONE Championship’s first all-women’s card.

These athletes have the ability to do it, too. All these competitors are known for their striking repertoires and submission skills, so fans should expect plenty of finishes on Friday, 3 September.

Before ONE: EMPOWER broadcasts live, take a look at five of the best finishes from the ladies scheduled for action.

ONE Women’s Atomweight World Champion Angela Lee may have been “Unstoppable” in her weight class, but when she moved up to challenge “The Panda” Xiong Jing Nan for the ONE Women’s Strawweight World Title, the Chinese superstar put an end to Lee’s undefeated streak.

After four rounds of back-and-forth action at ONE: A NEW ERA in March 2019, Lee came close to submitting her opponent with an armbar. But Xiong rallied back to score a TKO at the start of the fifth frame.

Xiong slammed a straight right punch into Lee’s torso, causing her to curl up and turn away. The strawweight queen then followed up with a barrage of straight rights and body kicks until the referee intervened to wave off the bout.

“The Panda” will attempt to extend her reign as the ONE Women’s Strawweight World Champion when she meets 13-time Brazilian Jiu-Jitsu World Champion Michelle Nicolini at ONE: EMPOWER.

By 2020, Denice “Lycan Queen” Zamboanga had already proven herself to be the #1-ranked women’s atomweight contender in The Home Of Martial Arts. But she further elevated her status against promotional newcomer Watsapinya “Dream Girl” Kaewkhong.

The Filipina and Thai battled at ONE: A NEW BREED in August 2020, and the contest lasted no longer than 90 seconds.

Zamboanga stayed in the pocket with Watsapinya early in the first round, but once the opportunity presented itself, “Lycan Queen” shot for a takedown and secured a submission finish.

After taking the fight to the canvas, the Filipina powerhouse moved into side control and after some ground-and-pound, worked in an Americana lock.  With no way to intelligently defend herself, “Dream Girl” was forced to tap at the 1:28 mark.

Next up, Zamboanga faces the toughest challenge of her career against dangerous finisher “Arale Chan” Seo Hee Ham in the quarterfinals of the ONE Women’s Atomweight World Grand Prix.

Ever since Meng Bo made her promotional debut in 2019, she has felt that she deserves a shot at Lee’s ONE Women’s Atomweight World Title. And after her walk-off KO of Priscilla Hertati Lumban Gaol, it is easy to understand why.

The pair met at ONE: INSIDE THE MATRIX II in November 2020, with the Chinese standout defending her #2 spot in the rankings and Lumban Gaol trying to smash her way into them.

But it was Meng who did the smashing, as she floored the Indonesian with a straight right punch that led to a first-round TKO finish.

When the fight began, Lumban Gaol came out throwing low and body kicks at her rival, but Meng tracked her laterally around the Circle until she pinned her against the Circle Wall.

Once there, the #2-ranked contender tossed out a lazy jab followed by a piercing right that dropped Lumban Gaol. The Chinese star then quickly went to work on her downed opponent and landed a rapid three-punch combination before the referee waved off the action.

Stamp Takes Out “The Cyclone”

That evening, she ripped through Indian Wushu Champion Puja “The Cyclone” Tomar en route to her fourth victory in the all-encompassing sport.

The finish came at the end of the first round after the Thai took Tomar’s back in a grappling exchange.

Stamp began to rain down punches and elbows while Tomar used her arms to absorb the punishment. However, the Fairtex athlete’s punches and elbows began sneaking through the Indian’s guard, and the referee intervened at 4:27 to protect Tomar from further damage.

At ONE: EMPOWER, Stamp looks to avenge her only mixed martial arts loss against old foe Alyona Rassohyna in the quarterfinals of the Grand Prix.

Itsuki “Android 18” Hirata had back-to-back submission wins when she stepped into the Circle to take on Nyrene “Neutron Bomb” Crowley, but the Japanese ace showed the world that her hand skills matched her grappling prowess.

Hirata stunned Crowley with a TKO finish at ONE: WARRIOR’S CODE in February 2020 — and kept her spotless professional record clean in the process.

“Android 18” worked her grappling throughout the matchup to test the submission defense of Crowley, and the New Zealander proved to be a worthy opponent. However, “Neutron Bomb” couldn’t handle Hirata’s ground-and-pound.

The Japanese star originally attempted a rear-naked choke when the two women were grappling on the canvas in the third stanza. But after Crowley rolled onto her stomach, Hirata dropped punches on her rival until the referee called a stop to the clash at 3:27 of round three.

Next, the young Japanese phenom looks to protect her undefeated record yet again when she battles Alyse “Lil’ Savage” Anderson in the last quarterfinal bout in the ONE Women’s Atomweight World Grand Prix.

Read more: Itsuki Hirata Wants To Give Power To Other Female Martial Artists 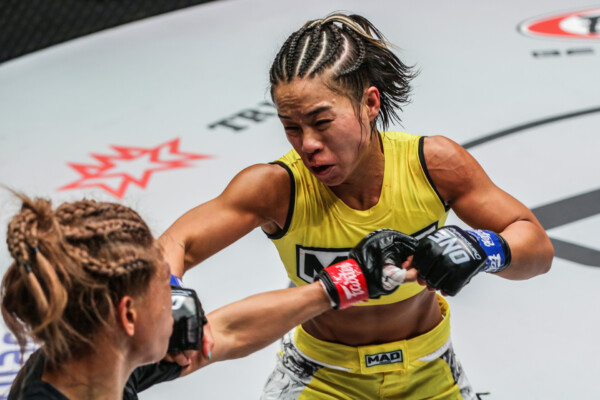