“The Panda” Xiong Jing Nan produced a career-defining performance in an epic battle to retain her ONE Women’s Strawweight World Title on Sunday, 31 March.

She defended the gold in a historic World Champion versus World Champion match-up against undefeated atomweight queen “Unstoppable” Angela Lee in the co-main event of ONE: A NEW ERA.

Xiong was pushed to the limit at the iconic Ryogoku Kokugikan in Tokyo, Japan, and she was nearly submitted in the fourth round. But the Chinese hero stormed back in the fifth and final stanza to defeat the Singaporean via TKO.

When the opening round began, Lee immediately darted across the cage and attacked the 31-year-old Beijing native with her vast striking combinations.

Although Xiong played a counter-punching role, she did not hesitate to return fire.

Both athletes landed some solid punches, but the ONE Women’s Atomweight World Champion used those exchanges to set up a beautiful trip takedown to bring the Chinese athlete to the ground.

Lee worked to advance her position, but “The Panda” remained patient and soon found a way to get back to her feet.

By the time the first round ended, the Singaporean’s confidence was surging, as she was able to avoid Xiong’s power to consistently get on the inside and utilize her world-class grappling skills. 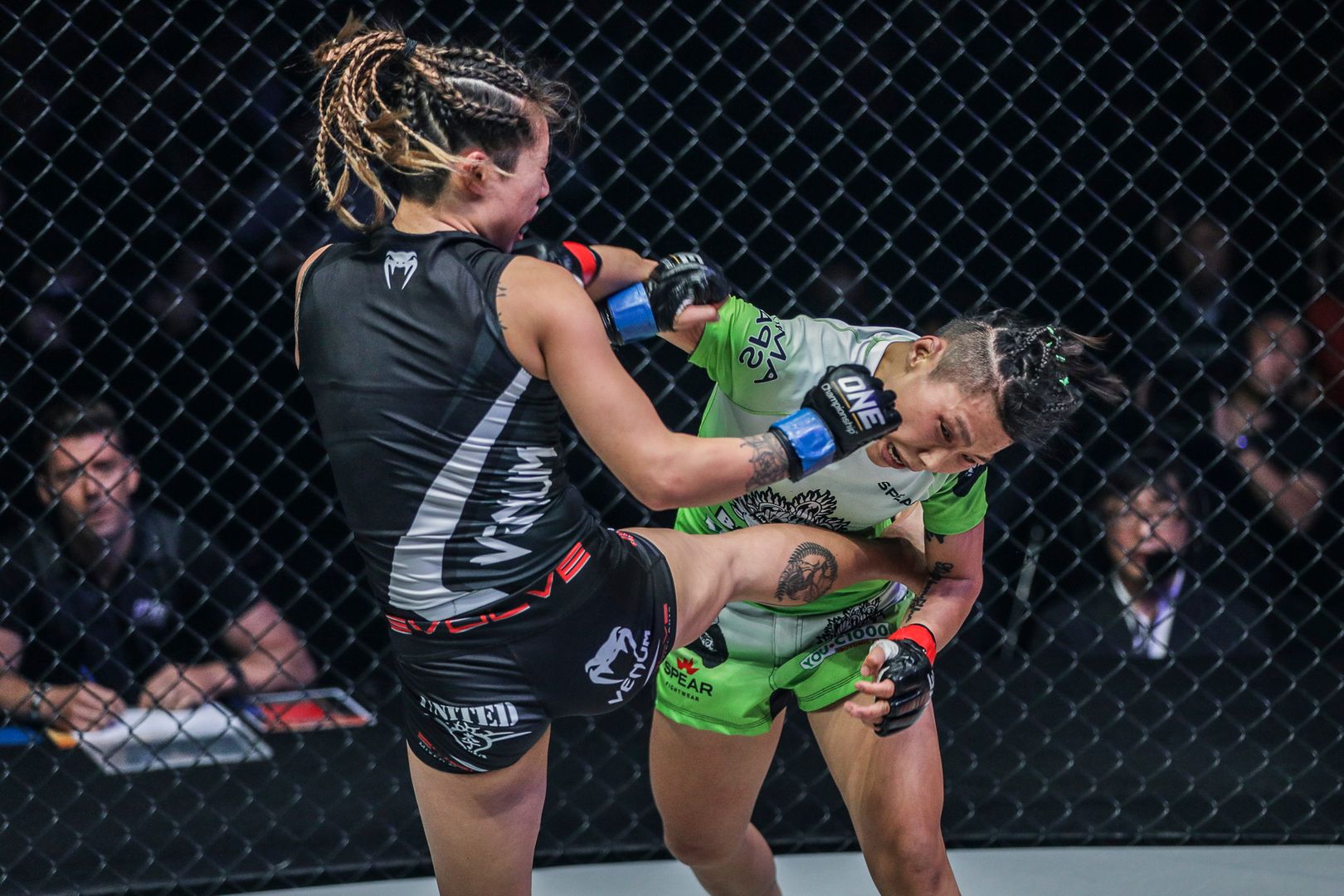 Lee continued to execute her strategy at the beginning of the second round, as she pressed forward and closed the distance.

The 22-year-old got locked in the clinch with Xiong several times and while she was not doing much damage, she still got the better of the exchanges.

The Singaporean remained busy at all times, as she peppered away with short body punches and then bludgeoned Xiong with elbows as they separated from close quarters.

When the third round started, “Unstoppable” looked to dish out more of the same attack, but she slowed down a little bit. Ultimately, that allowed the momentum to shift.

Xiong was throwing punches with more force behind them, firing three and four-strike combinations that found Lee’s chin.

Once she found the mark with her punches, she began throwing with much more regularity and chipped away at the atomweight queen with leg kicks. 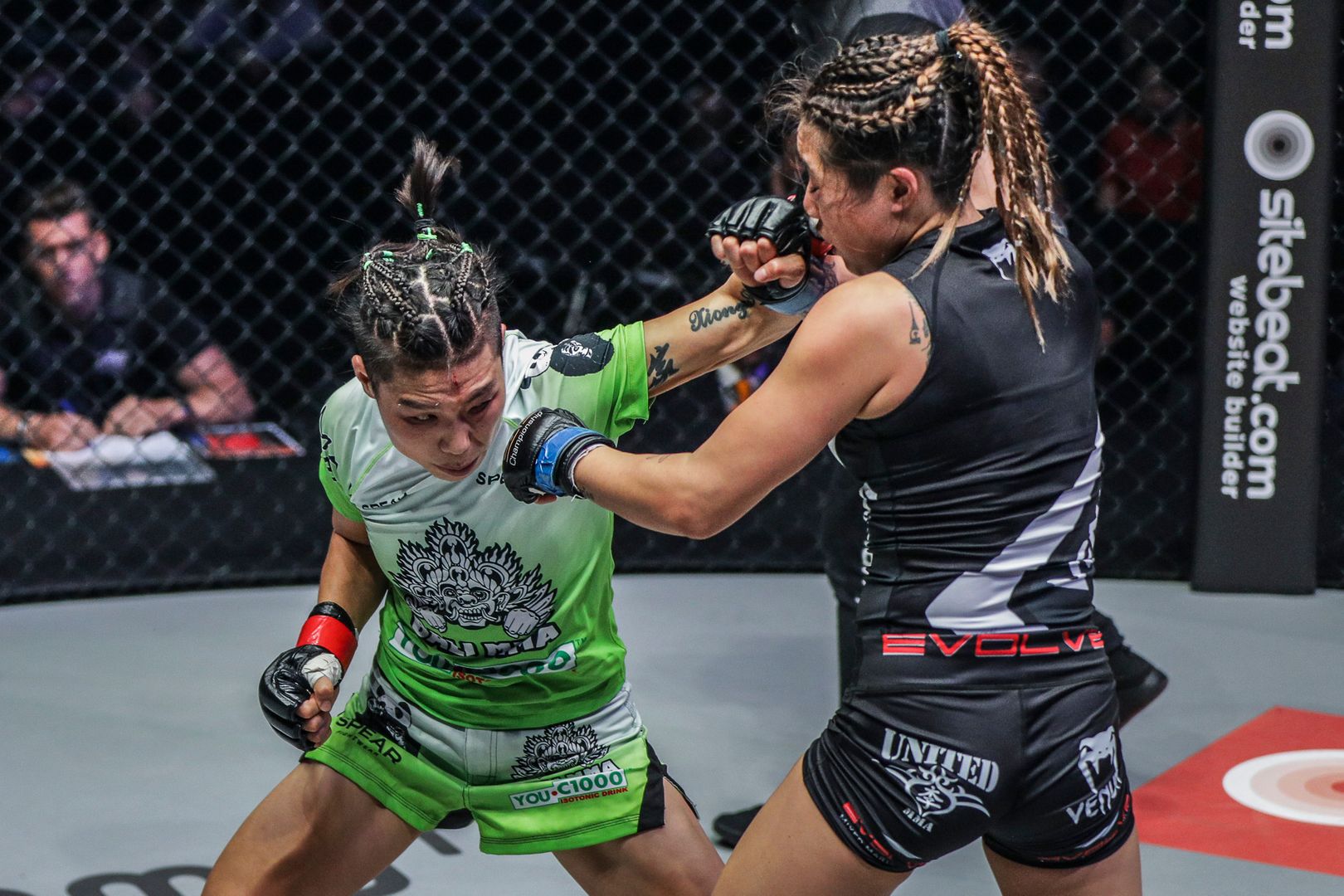 Between rounds, Lee’s corner advised her to look for the takedown, and she followed those words of advice as soon as the fourth stanza began.

It was flawless execution as the Singaporean popped Xiong with a right hand down the middle, dropped down to get her opponent’s legs, and then dumped the strawweight queen onto the canvas.

Lee continued to advance her position and at the halfway point of the round, she locked up a reverse triangle choke. She also secured an armbar, twisted the limb, and torqued it to the point where it appeared like “The Panda” would submit at any moment.

Xiong displayed her toughness, however. She kicked off the cage, scrambled to other positions, and constantly found a way to survive even as “Unstoppable” refused to give up the submission.

The bell rang to end the period and, despite being stuck in the reverse triangle and armbar for nearly two minutes, the Chinese dynamo was eager to continue.

Unfortunately for Lee, she looked drained after desperately trying to get the stoppage.

“The Panda” took full advantage of the situation entering the fifth and final round.

She went on the attack with a barrage of punches, battering her visibly exhausted rival with a slew of overhand rights and left hooks.

Although Lee was on the back foot and absorbing the blows, she went for a double-leg takedown. However, the Chinese hero shrugged it off with ease.

Xiong continued walking her down with punches and kicks, but it was a rib-rattling shot to the body that had Lee dropping her hands and wincing in pain.

Knowing the end was near, “The Panda” followed up with punches to the head and kicks to the ribs. Lee folded in half and turned away from the punishment, which forced referee Kemp Cheng to call a stop to the contest at 1:37 of round five. 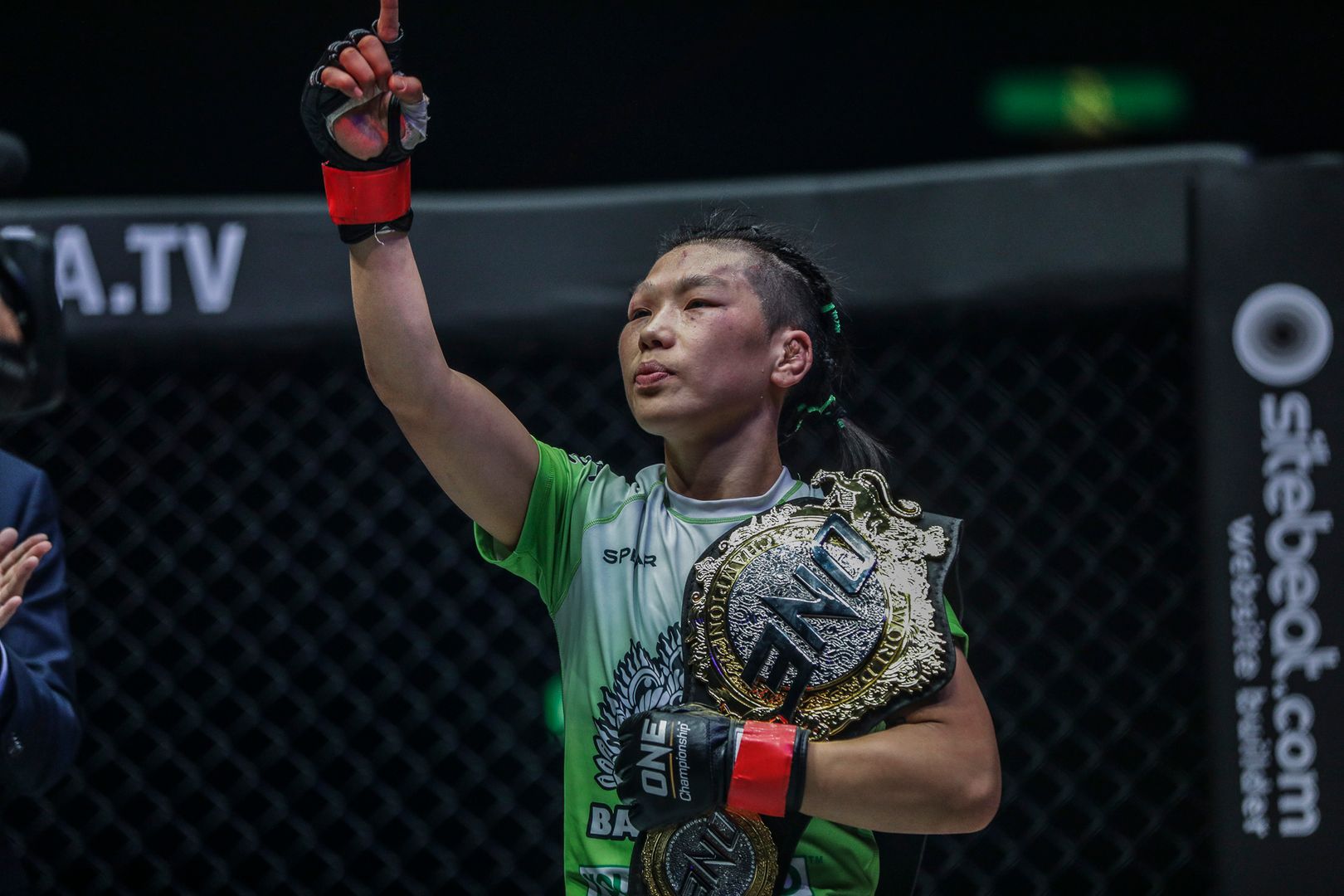 It was an amazing performance from both athletes, but Xiong was able to drag Lee into deep waters and earn the spectacular come-from-behind finish in the final minutes of the co-main event.

The Chinese hero moved her record to 17-1 and proved to be the most dominant female martial artist in ONE Championship.

By doing so, she also handed Lee the first loss of her professional mixed martial arts career and denied her the honor of being the first women’s two-division ONE World Champion.