The only thing as exciting as a fast knockout is a quick submission, and four of the world’s martial arts heroes competing at ONE: PINNACLE OF POWER are very capable of the latter.

These athletes have impressed mixed martial arts aficionados with swift tap-out finishes in the past, and have all the tools to do it again when they enter the Studio City Event Center in Macau on Saturday, 23 June.

As ONE Championship gears up for this mega-card, relive these four dynamic first-round submissions from the warriors competing at the show.

Last November, just three months after defeating Kairat “The Kazakh” Akhmetov in a rematch to become the undisputed ONE Flyweight World Champion, Adriano “Mikinho” Moraes returned to the cage for the first title defense of his second reign.

The Brazilian entered the Mall of Asia Arena in Manila taking on hometown favorite and unbeaten challenger Danny “The King” Kingad at ONE: LEGENDS OF THE WORLD.

It was a tall task, but Moraes was unfazed by the pro-Kingad crowd.

Nearly two and a half minutes into what was a tentative start to the contest, “Mikinho” turned things up a notch. He caught one of Kingad’s leg kicks, connected with a punch that knocked him to the canvas, and followed him to the ground.

Moraes stuck to him like glue, softened him up with strikes, and continued to advance his position. “The King” tried to scramble away, but the Brazilian took his back, locked in a body triangle, and secured the rear-naked choke to force the tap with just 15 seconds remaining in the opening stanza.

“The Underdog” Li Kai Wen wanted a fresh start on his road back to the ONE Featherweight World Championship.

After experiencing an unfortunate end to his clash with Ahmed Mujtaba last November, the Chinese dynamo wrote a new chapter in his career at ONE: QUEST FOR GOLD in February.

In front of a capacity crowd at the Thuwunna Indoor Stadium in Yangon, Myanmar, he threw everything he had at debuting Filipino Muay Thai specialist Roel “Akiyama” Rosauro.

When the opening bell sounded, Li aggressively moved forward with stiff shots that constantly put Rosauro on the back foot. Rosauro’s desperate attempt at a takedown backfired, as the Chinese warrior stuffed it and retaliated with elbows and even more punches.

The Filipino escaped, continued to backpedal, and threw wild strikes in an effort to slow his opponent down. But Li walked through it all, and thwarted another one of Rosauro’s takedown attempts. This time, he also secured a guillotine choke, and submitted his opponent after just 43 seconds.

Li entered the record books for recording the third-fastest submission in the featherweight division. He hopes to build on that with a victory over Rodian “The Reedemer” Menchavez in Macau.

"E.T" gets it done in under a minute, subliminal submission skills!

Posted by ONE Championship on Monday, February 5, 2018

Four and a half months after experiencing his first ONE loss, Ev Ting bounced back in a major way.

Competing in front of a home crowd at Kuala Lumpur’s Putra Indoor Stadium, “E.T.” immediately proved he was championship material against the one-time world title-holder.

Ting marched forward with the intention to strike with the wushu specialist, but Banario went for a single-leg takedown and tried to take his adversary’s back. The local hero was able to escape, and looked to strike again.

Once more, Banario went for the takedown. This time, however, Ting locked in a deep guillotine choke and forced “The Rock” to submit after just 56 seconds.

While the Filipino has campaigned for a rematch, Ting remains focused on his quest for a second shot at the ONE Lightweight World Title. He could earn it yet if he defeats the man below.

Koji "The Commander" Ando made a huge statement in his ONE debut.

Koji "The Commander" Ando made a huge statement in his ONE debut.Download the ONE Super App now ???? http://bit.ly/ONESuperApp

In July 2014, a little over a year after winning the Legend FC Lightweight Title, Koji “The Commander” Ando joined ONE Championship to make his presence felt in one of its most stacked divisions.

At ONE: WAR OF DRAGONS at the NTU Sports Center in Chinese Taipei, he faced a fellow promotional debutant – the unbeaten Rafael “Indio” Nunes.

Ando stalked the hesitant Brazilian in the first minute of the match, keeping him on the back foot. Nunes went for a single-leg takedown from long-distance, but the third-degree judo black belt stuffed it, maneuvered halfway around his adversary’s back, and secured the rear-naked choke from an unorthodox position.

It wasn’t quite the right angle to force the tap, but when Nunes was rolled over, “The Commander” slid into the perfect place to apply even more pressure. “Indio” had no choice but to submit with just a minute and 43 seconds on the clock.

The Japanese athlete will look to utilize his well-rounded skill set to stop Ting’s momentum, and get back on track himself, at ONE: PINNACLE OF POWER. 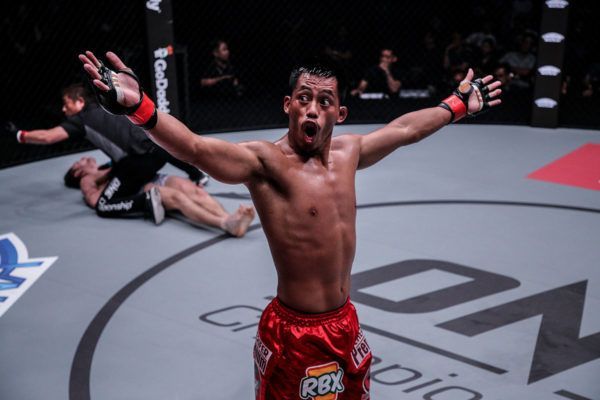