Tyler McGuire (11-0) has a chance to stand shoulder-to-shoulder with the greatest superstars in ONE Championship on Saturday, 17 November.

The American is scheduled to face Zebaztian “The Bandit” Kadestam (10-4) for the vacant ONE Welterweight World Championship in the main event of ONE: WARRIOR’S DREAM.

By defeating the Swedish striker for the World Title at Stadium Istora in Jakarta, Indonesia, he can proclaim himself as one of the best mixed martial artists on the planet.

“To be a ONE World Champion means you are one of the world’s elite,” the 32-year-old says.

“You have guys like Brandon Vera holding the heavyweight World Title, Aung La N Sang as a double champion, guys in the lower weights like Shinya Aoki, and greats like Eddie Alvarez and Demetrious Johnson are coming over.”

After compiling 10 consecutive victories in the competitive American scene, McGuire made his promotional debut at ONE: PURSUIT OF POWER.

As he entered the Axiata Arena in Kuala Lumpur, Malaysia, for his bout with former ONE Welterweight World Title challenger Luis “Sapo” Santos, the Washington native took a moment to bask in the atmosphere.

“It was surreal. I had been to other promotions’ shows, but ONE: PURSUIT OF POWER was by far the best production and the most well put-together production I had ever seen,” he says.

“It was just the coolest, nicest cage I had ever been in, hands down. The crowd, the atmosphere, I was just in awe taking it in.

“Fighting on that stage was incredible. It was definitely the coolest thing I’d ever done.”

The spirited environment did not distract the energetic American from the task at hand, however.

Although Santos had nearly seven times the amount of experience, the promotional newcomer was unfazed. He applied constant pressure on the Brazilian, and never gave him a second to breathe.

McGuire landed several takedowns, and dominated the veteran on the ground en route to a unanimous decision victory.

“I knew that I had prepared and I put the work in, and I wanted to show my work. I wanted the fans to want to watch me fight, and I feel like I went out and did that,” the Washington native explains.

The American also knew a strong victory over the Brazilian would catapult him into World Title contention.

“I knew that if ONE was putting my feet to the fire right away against ‘Sapo,’ then a title shot was probably coming next,” he continues. “I felt like they were seeing if I was ready for a World Title shot.” 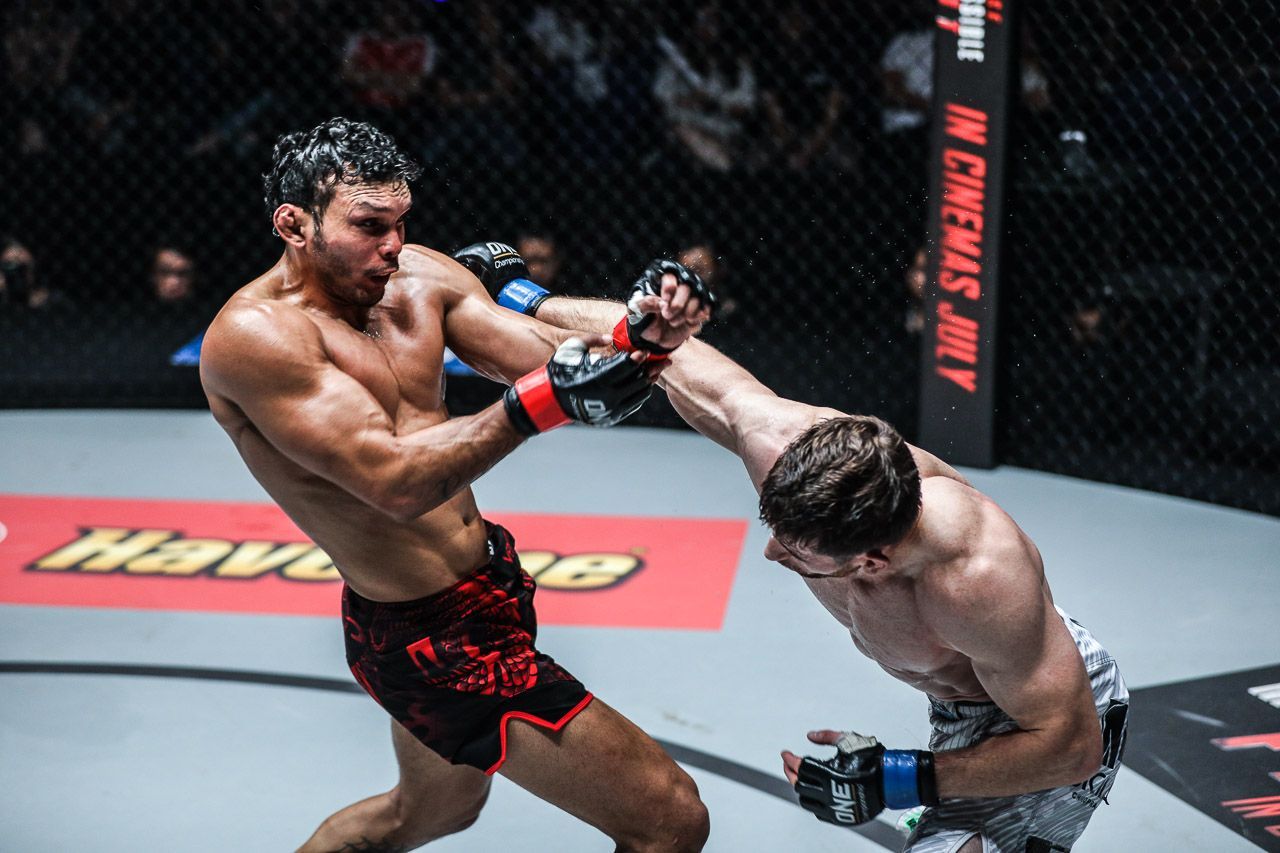 McGuire’s instincts were right, and he was granted a shot at the vacant ONE Welterweight World Championship. However, in order to claim the gold, he will need to defeat “The Bandit.”

The American got a perfect view of the Swede in action, as Kadestam competed later that evening in the card’s headline attraction.

Both victors spent some time bonding together backstage that night in Kuala Lumpur, but that will not stop the Spokane, Washington-based athlete from doing everything he can from defeating “The Bandit” in their high-stakes Indonesia showdown.

“He brings a lot to the sport. He’s one of the toughest son of a guns I’ve ever seen in my life. I know he’s going to show up to fight, and that’s what I want.” McGuire knows this World Title bout is being pegged as a classic striker versus grappler match-up, with his dynamic wrestling going up against Kadestam’s incredible knockout power.

However, the American believes he can defeat “The Bandit” in other ways.

While he is not giving away too many of his secrets, he is confident he can stand toe-to-toe with the Swede, and he will have a chance to prove that when they square off in Jakarta.

“I really think my striking is underrated,” he says.

“I think Kadestam said recently that I can’t really hurt him on the feet, and we’ll see. I do work hard on my striking and I’m trying to be a complete martial artist. If the opening is there for a takedown, I’m going to take it, but if not, we’re going to stand there and strike.”

There is no doubt McGuire will pull out all the stops in order to claim the gold, and bring his dreams to life as the best welterweight in the world. That is what drives him, and he could finally get that recognition on 17 November.