Itsuki “Strong Heart Fighter” Hirata experienced the first real adversity of her professional career at ONE: WARRIOR’S CODE, but she proved her talent and character to survive and keep her perfect record.

On Friday, 7 February, the Japanese athlete did not have things all her own way against Nyrene “Neutron Bomb” Crowley, but she battled through everything the Kiwi threw at her to get her sixth straight stoppage victory.

The match was billed as a classic match-up of Hirata’s grappling against Crowley’s striking, but it presented a ton of surprises as both athletes showed no fear of engaging wherever the bout went.

That was true from the first bell as the 20-year-old “Strong Heart Fighter” attacked with little concern for the threat Crowley posed with her crisp kickboxing and knees in the clinch.

“I knew she was a striker, so I thought she would come with more striking, but she didn’t come forward that much, so I went forward, threw my strikes and looked to grapple,” she says.

“I was constantly thinking about attacking without resting.”

It was not too long before Hirata went for takedowns, and in her previous bouts, that meant a finish was imminent.

However, “Neutron Bomb” surprised many fans by reversing positions twice in round one and looking like she could threaten a finish herself, but even when the Tokyo native was underneath her opponent, she stayed calm.

“I knew from the start she was capable [on the feet and the ground],” Hirata says.

“Even when she got the reversal I was thinking about attacking from the bottom, but she stood up, so I concluded that maybe she didn’t want to grapple. So, I thought I should tie-up with her more.”

Sure enough, “Strong Heart Fighter” had success with ground and pound at the end of the first stanza, and then looked like she might be close to a submission at the start of the second when she locked up an inverted triangle. In the end, her position in the corner of the ring made that tricky.

“I wanted to take the arm and go for an armlock, but we were at the ropes,” Hirata explains.

“I wanted to ground and pound, but I thought it’d be no good just keeping position, and I was thinking about how to move when my leg came out. I think if [the match] was in the cage it might have been a bit different.” 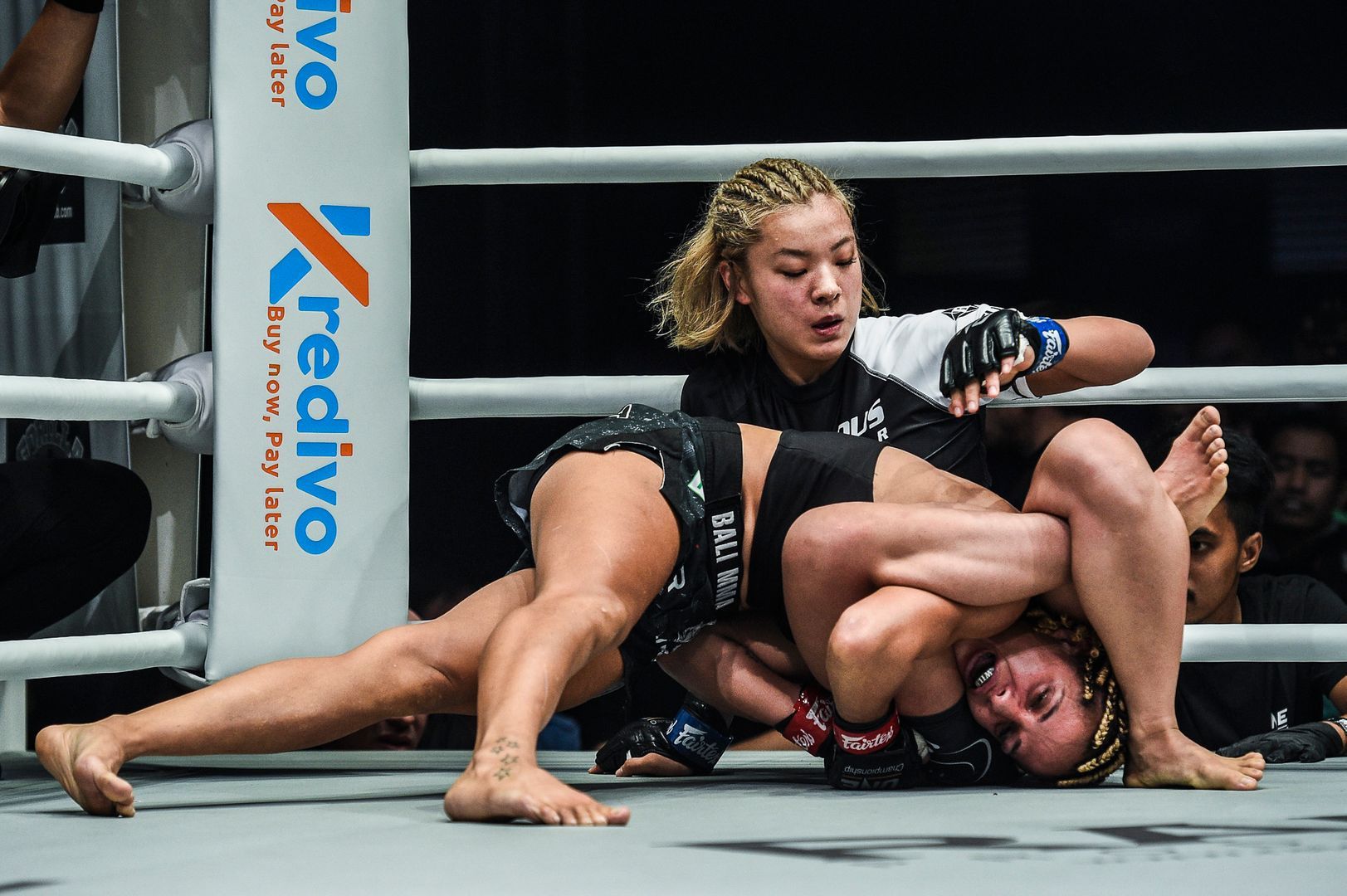 Though Crowley persevered through that tight spot, and then a barrage of ground and pound, Hirata knew her rival was there for the taking in the final round, and she came out of her corner with a smile on her face.

“I saw that her willpower was fading a little. I thought, ‘Now is my chance,’ so my attitude was that I must push forward and attack,” she adds.

“I got her down and took side control. I thought I’d get her arm using my ground and pound, but she moved so I took the back. I thought about trying to take the choke, but my balance was bad so I decided against that. I kept on her back [as she moved] and finished with ground and pound.”

The finish with a little less than two minutes to go in the contest meant the K-Clann representative maintained her 100-percent finishing rate and extended her perfect record to 6-0. Though she was happy when she arrived back home, she was not completely satisfied with her performance.

Hirata wanted to show more of her grappling and pull off a more impressive finish, so she says she still has some work to do before she takes her next bout. 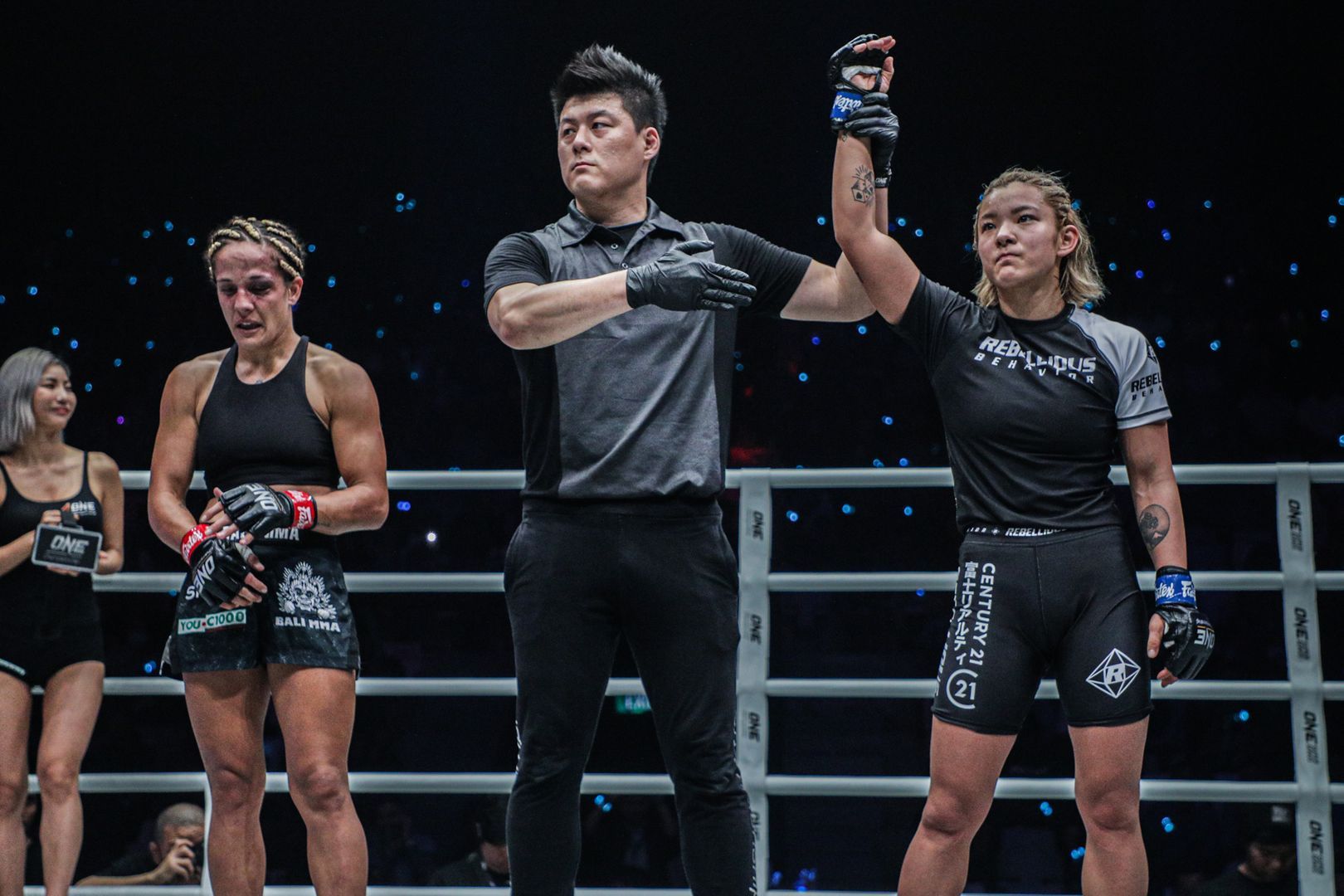 She hopes she can return soon, and when she does, she is open to facing anyone that will help her climb the atomweight ladder. With that said, Hirata feels like she has some unfinished business to take care of against an athlete she was scheduled to face before injury ruled her out.

“I’m thinking [I want to compete again] around April or May if possible,” she says.

“I really don’t have any preferences [for my next opponent], but if possible I’d like another match-up with (Bi) Nguyen. I trained and had a game plan for her. Of course, it depends on the condition of her injury, but if she’s better, I’d like that bout.”