ONE: AGE OF DRAGONS kicked off with some incredible results on Saturday, 16 November in Beijing, China.

The prelims brought back-and-forth battles, one spectacular finish, and a couple of quality performances from some national heroes that brought their compatriots to their feet in the Cadilac Arena.

If you missed any of the action, catch up with the results and highlights right here.

Christina Breuer did not back down from a toe-to-toe battle against Jorina “Jojo” Baars, and her reward was a split decision to consign to the Dutch kickboxing legend to the first defeat of her 50-bout career.

In the first round, Baars socred with hard strikes from the outside, but her rival from Germany managed to find a way inside to connect with some clean counter punches.

The 21-year-old was made to feel the power of “Jojo’s” strikes more in the second period as she marched forward to unleash her straight punches, right kick, and knees. However, Breuer never wilted, and then set a high pace during the final three minutes of this featherweight encounter.

Baars continued to come forward in round three, but she had her head rocked back by sharp punches on multiple occasions. That helped Breuer to earn the favor of two judges to seal a historic victory and improve her pro slate to 17-2.

Tang Kai picked his shots well in the opening minutes of his featherweight duel with Edward “The Ferocious” Kelly as he struck with low kicks before going upstairs to test his chin.

Two takedowns sealed the opening frame for the Chinese athlete, which forced the Flipino veteran to come out with more aggression in round two. However, even the trademark Team Lakay spinning kicks had little effect on the Dragon Warrior Shanghai representative, and he controlled about half the round in side control after another takedown.

In the final period, Tang stayed on the outside and peppered Kelly with overhand rights and low kicks to seal a unanimous decision win. That delighted the Beijing crowd, and pushed his record to 10-2.

Grappling specialist Yusup “Maestro” Saadulaev was happy to strike in the early part of his bantamweight match-up with Daichi Takenaka, but he was made to eat a healthy diet of kicks from the Japanese competitor.

The Russian continued to absorb blows throughout round two as the left kick landed hard to the leg and body. Saadulaev’s midsection was glowing pink after 10 minutes, but he also found his range and had success with some hard counter right hands that caused some noticeable damage.

That success seemed to bring him to life as he pressed forward in the first half of the final round and dominated with strikes in the clinch. His offense looked like it could swing the match in his favor, so Takenaka came on strong in the final 90 seconds to land kicks high and low.

“Maestro” was not a static target, and fired back until the final bell, and that was enough to seal scorecards from two of the judges and earn a split decision, which improved the 34-year-old’s record to 19-5-1 (1 NC) and strengthened his claim for a shot at Bibiano “The Flash” Fernandes’ World Title.

Enriko Kehl stops Armen Petrosyan in the second round with a blistering barrage of strikes! ????

Enriko "The Hurricane" Kehl stops Armen Petrosyan in the second round with a blistering barrage of strikes! ????????: How to watch ???? http://bit.ly/ONEAODHOTW????: Book your hotel ???? bit.ly/ONEhotelplanner????: Watch on the ONE Super App ???? bit.ly/ONESuperApp????: Shop official merchandise ???? bit.ly/ONECShop

Enriko “The Hurricane” Kehl stormed through Armen Petrosyan in a ONE Super Series clash of kickboxing World Champions at a 73-kilogram catch weight.

He put pressure on Petrosyan from the first bell and landed crisp straight lefts and step-up knees from the outside. The Italian was forced on the back foot, and even when he landed shots in reply, “The Hurricane” never slowed down.

The German kept up his offensive in round two, and thudding left cross knocked Petrosyan back across the ring and onto the canvas for an eight-count. He had no chance to clear his head after the restart as Kehl pushed him against the ropes and unleashed knees into the body and head.

With no offense coming in the opposite direction, referee Olivier Coste stepped in to issue another count, and after assessing the Italian, he was in no condition to continue. The second-round TKO gave Kehl’s his second stoppage win in The Home Of Martial Arts and bumped his record to 49-15-2.

Hexigetu Makes It Two In A Row

???? The “Wolf of the Grasslands” Hexigetu opens ONE: AGE OF DRAGONS with a unanimous decision win over Ramon Gonzales!

???? The “Wolf of the Grasslands” Hexigetu opens ONE: AGE OF DRAGONS with a unanimous decision win over Ramon Gonzales!????: How to watch ???? http://bit.ly/ONEAODHOTW????: Book your hotel ???? bit.ly/ONEhotelplanner????: Watch on the ONE Super App ???? bit.ly/ONESuperApp????: Shop official merchandise ???? bit.ly/ONECShop

China got off to a winning start in the Cadillac Arena as “Wolf of the Grasslands” Hexigetu charged forward to impose his wrestling game and delivered a commanding performance over 15 minutes.

Though Ramon “The Bicolano” Gonzalez ended up in a dominant position at first, his opponent reversed to take control from the top. He stayed there for most of the round, though he had to be on his guard for submission attempts.

Hexigetu established control again in the second stanza and was more successful with ground and pound as the Filipino struggled to find a way to mount much offense.

Another takedown in the opening seconds of the final frame brought more of the same as the strawweight China Top Team representative cruised to his second consecutive unanimous decision win, and improved his mixed martial arts record to 7-4. 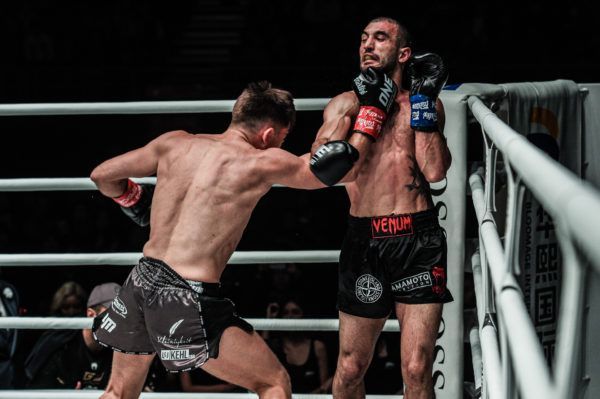