There’s no doubt that ONE: INSIDE THE MATRIX II was the riveting sequel that fans deserved.

In the main event, Kiamrian “Brazen” Abbasov defended the ONE Welterweight World Championship against James Nakashima. And the five-bout card was also filled with top contenders pushing to climb higher in their respective divisions.

After all the jaw-dropping moments and cracking knockouts in Singapore, we’ve chosen our top three highlights from the nonstop action on Friday, 6 November.

???? TRIFECTA: Find out how the ONE Welterweight World Title fight between Kiamrian Abbasov and James Nakashima went down!

???? TRIFECTA: Find out how the ONE Welterweight World Title fight between Kiamrian Abbasov and James Nakashima went down! #InsideTheMatrix2

If you look up the definition of “grit” in the dictionary, you’ll see a picture of Kiamrian “Brazen” Abbasov. His successful ONE Welterweight World Title defense was an expression of precisely what makes Abbasov the best welterweight in the world.

Undefeated American challenger James Nakashima seemed poised for an upset after giving the reigning king an incredible test for the first three-plus stanzas.

But the last two frames are called the championship rounds for a reason, and the ONE Welterweight World Champion stayed composed and found his moment in the fourth.

With just under two minutes remaining, Abbasov cracked Nakashima with a knee as the challenger changed levels for a takedown attempt. The MMA Lab representative was left staggering around the Circle, and “Brazen” capitalized.

A right uppercut stunned the American again, and Abbasov was able to swing him to the canvas, where a final clean right hand sealed the deal.

The Kyrgyz retained his gold and showed all welterweight contenders that they’ll need to be prepared for five rounds if they want to knock him from his throne.

???? TRIFECTA: The knockout that ended Yuya Wakamatsu ???? Kim Kyu Sung was so epic, we HAD to show you multiple angles! ????

???? TRIFECTA: The knockout that ended Yuya Wakamatsu ???? Kim Kyu Sung was so epic, we HAD to show you multiple angles! ???? #InsideTheMatrix2

Yuya “Little Piranha” Wakamatsu defended his #4 position in the flyweight rankings by adding another knockout to his highlight reel.

It didn’t take long for the action to get going, as South Korean Kim Kyu Sung quickly assumed the center of the Circle and Wakamatsu bounced in and out while looking to land power shots.

An early stiff jab from Kim only seemed to spur Wakamatsu. And when the South Korean applied pressure to force “Little Piranha” backward, he was greeted by the Japanese star’s blistering speed.

Before long, there were fireworks. Wakamatsu faked with a left jab, and when Kim opened up to counter, “Little Piranha” sent a straight right down the pipe through his rival’s guard. As the South Korean fell to the canvas, the Japanese knockout artist followed with two bout-ending punches on the ground at 1:46 of the first round.

With his third straight win, Wakamatsu showed once again that he’s a true threat in the flyweight division.

Her adversary, Priscilla Hertati Lumban Gaol, knew to be wary of Meng’s punches and smartly used various kicks to keep the Chinese athlete at a safe distance.

But Meng inched closer to position herself within striking range while Lumban Gaol backed up against the Circle Wall. And as the Indonesian tried to throw a side kick, the Chinese striker parried down a hand and fired off a rocket of a straight right that echoed throughout the venue.

Lumban Gaol collapsed, and the atomweight contender followed with a couple of crisp ground strikes before the referee could slide in to halt the action at 1:26 of the first round.

Once again, Meng’s crushing power sent shockwaves through the division and should position the rising star as one of the favorites for the ONE Atomweight World Grand Prix in 2021. 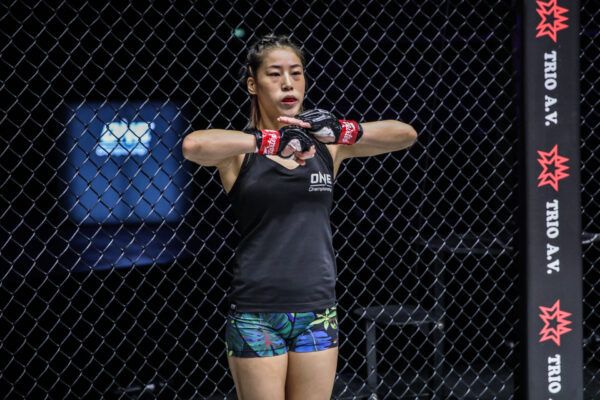