ONE Welterweight World Champion Kiamrian “Brazen” Abbasov got his reign off to a blistering start on Friday, 6 November.

Nearly 13 months removed from claiming the gold, the Kyrgyzstani dynamo looked even more spectacular in his first World Title defense at ONE: INSIDE THE MATRIX II, which was previously recorded at the Singapore Indoor Singapore.

Though Nakashima came into this matchup with a 12-0 record, he had no answer for the “Brazen” warrior. In the end, the 27-year-old Kyrgyz dropped his challenger with a knee in the fourth round and then finished him off with strikes. 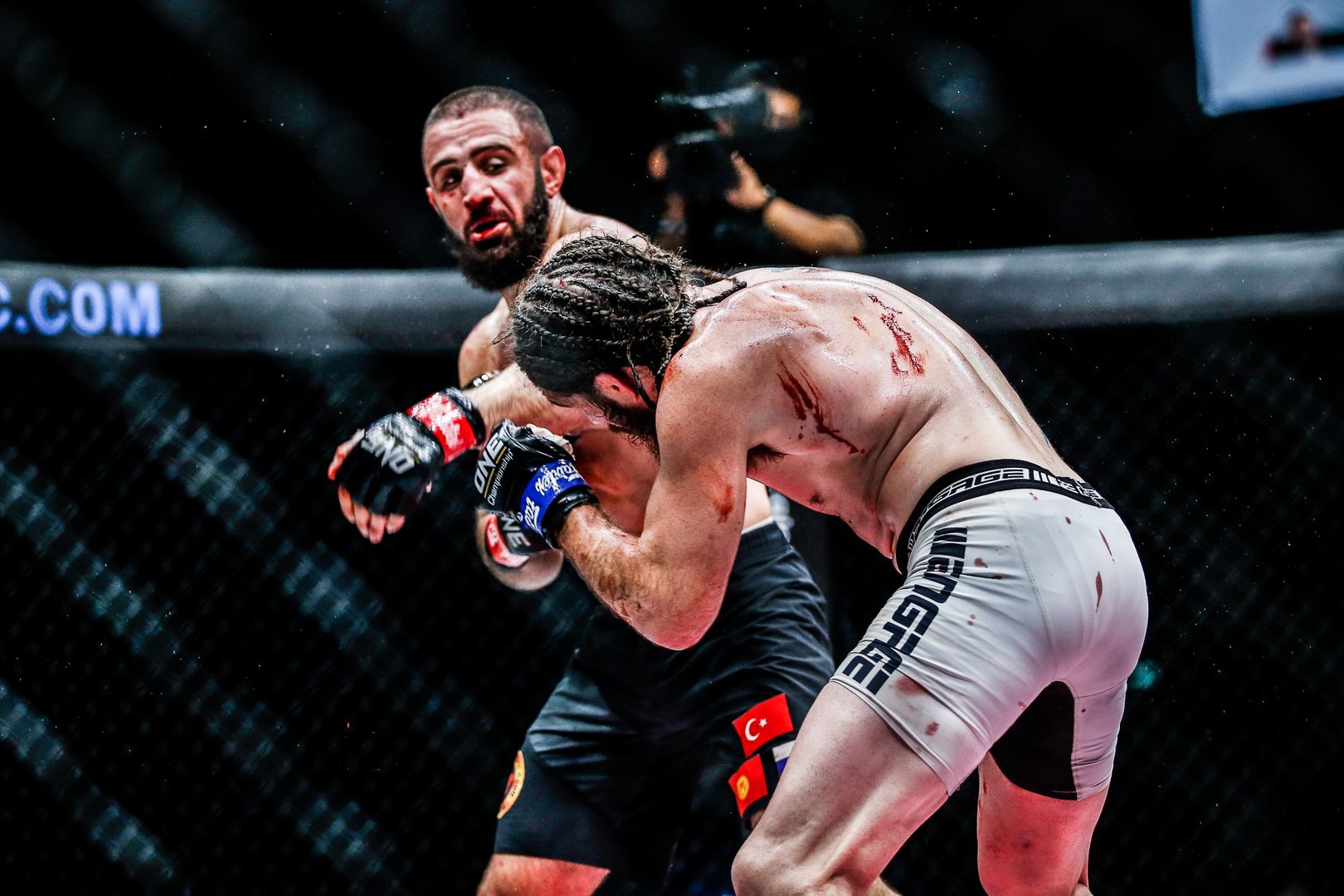 The two bearded athletes took different approaches at the start of their contest.

As Abbasov tried to establish a rhythm with his striking, Nakashima was determined to use his NCAA Division I Wrestling expertise and bring the action to the canvas.

He backed the welterweight king to the Circle Wall on three occasions and aimed to land a takedown, but the Kyrgyz warrior shrugged off each of those attempts.

The American southpaw then utilized a tight guard and kept the World Champion guessing with his kickboxing and grappling. While Abbasov seemed a little tentative, he displayed a sense of fearlessness, even tripping the MMA Lab representative to the ground midway through the opening stanza.

Nakashima clung to his wrestling and continued to hunt for takedowns, but he also brilliantly displayed his Team Petrosyan-developed striking, hitting “Brazen” with heavy inside leg kicks, left hooks, and even a left cross that damaged the bridge of his nose. 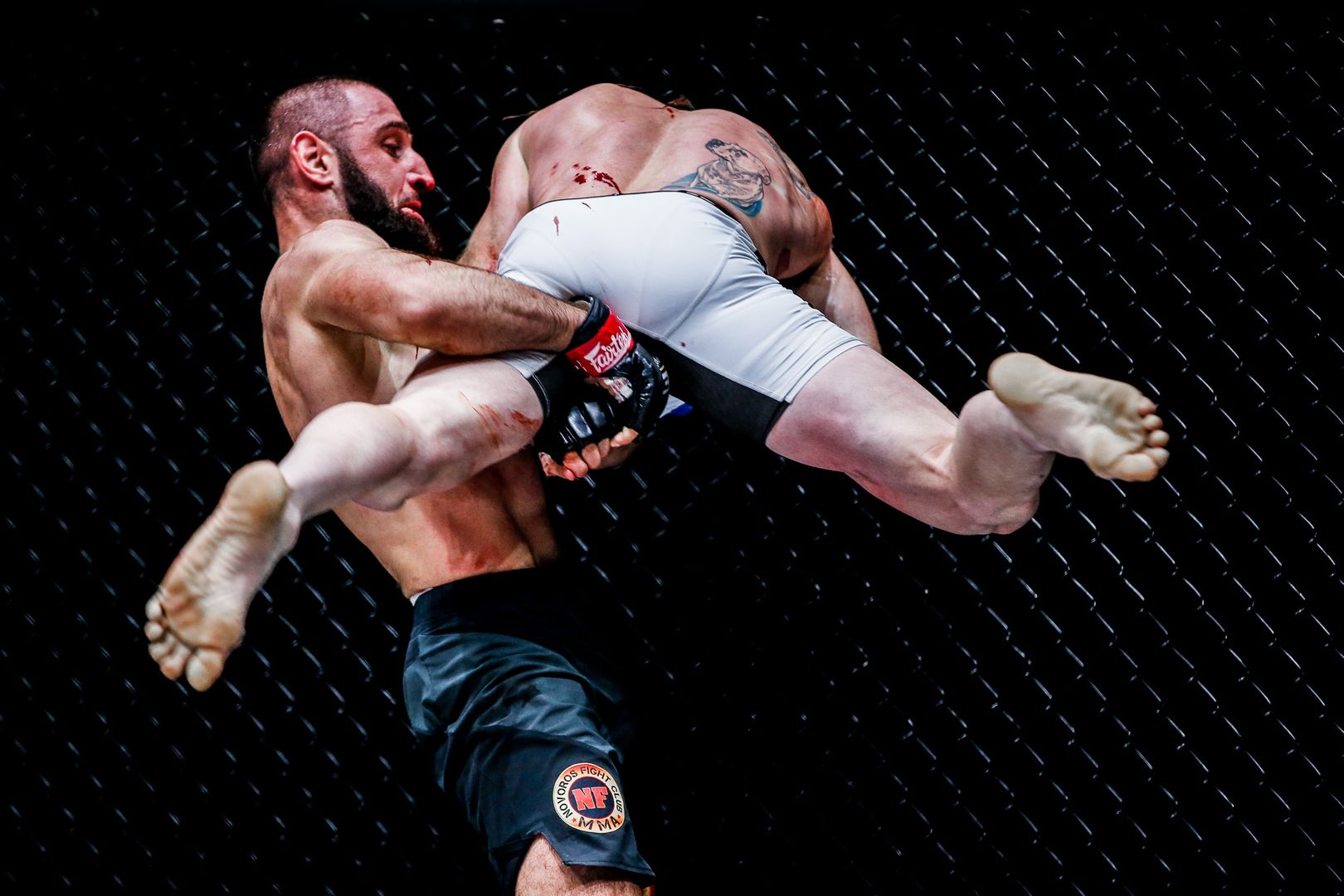 In the second round, Nakashima took control of the center and forced the welterweight king to fight from the outside. He threw inside leg kicks and looked to land more punches on the Kyrgyzstani athlete’s damaged nose.

Following a brief pause in the action for an inadvertent kick to the groin, the challenger continued to disrupt Abbasov’s rhythm by rushing in for a takedown and clinching with him against the Circle Wall.

However, “Brazen” utilized his Greco-Roman wrestling skills, defended well, and tripped the undefeated American. Next, he bum-rushed Nakashima to the Circle Wall, grabbed a single leg, and tried to hit a takedown of his own. But the MMA Lab product defended the attempt, escaped, and returned to the center of the Circle.

Abbasov started to flow more with his striking and soon found a home with his jab and right uppercut. Then, he surprised the challenger by grabbing the left leg and hitting a takedown. Before he could capitalize, however, Nakashima returned to his feet.

The reigning king became looser with his strikes toward the end of the frame, but the American continued to evade his rival’s shots, flung heavy inside leg kicks, and threw short punches. 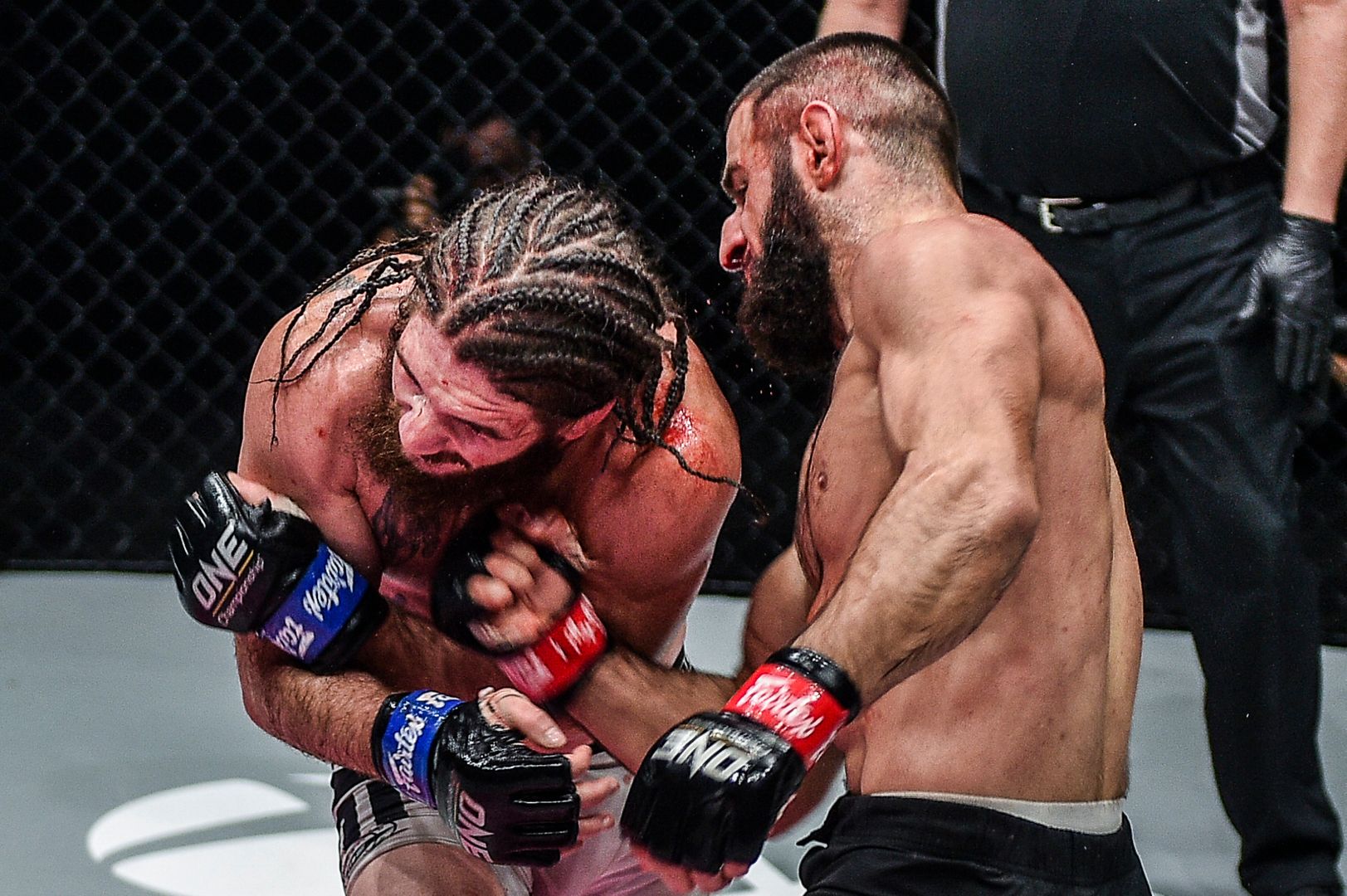 Abbasov may have been getting comfortable, but the challenger turned up the heat in the third round.

Following a failed takedown attempt, the welterweight king walked down Nakashima and looked to connect with a jab-cross combo, inside leg kicks, and even a head kick, but the American retaliated with an inside leg kick of his own and then put his opponent on the back foot.

The Kyrgyz unleashed a massive left hook-right uppercut combination, but moments later, the MMA Lab representative closed the distance and landed a quick single-leg takedown. He tried to advance his position and apply top pressure, but Abbasov consistently found ways to keep his rival in his guard or half-guard.

At one point, Nakashima even tried to secure a Von Flue choke, but “Brazen” cleverly defended the submission attempt and prevented the challenger from accumulating much damage. 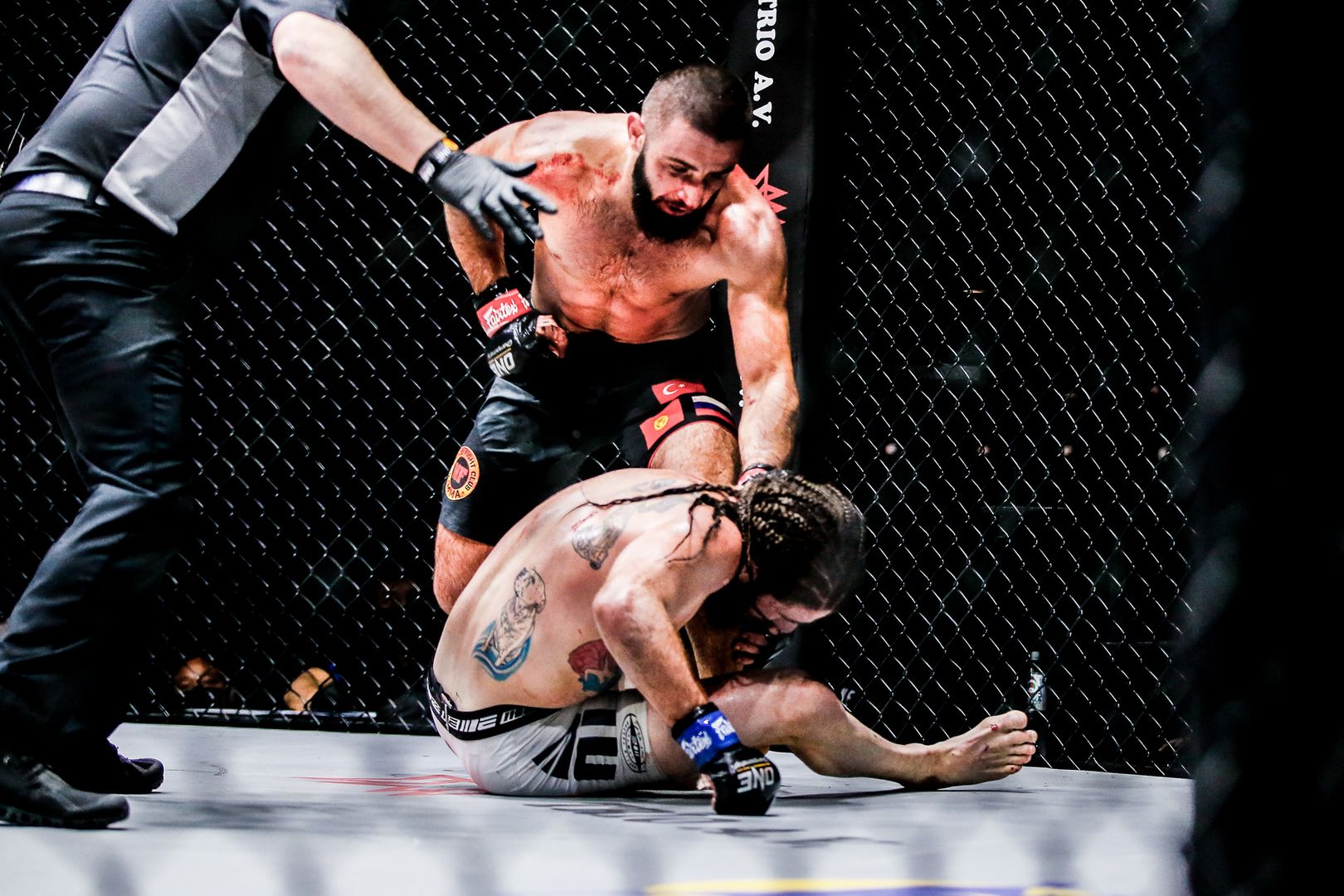 After a great third round for Nakashima, everything changed in the fourth.

The American looked to ride his grappling momentum by going for a double-leg takedown early in the stanza. When that failed, he tied Abbasov in a body clinch and rushed him to the Circle Wall, but eventually, the reigning World Champion broke free from his grasp.

Nakashima continued to march forward, meticulously threw inside leg kicks and left crosses, and even went for another double-leg takedown. But soon, “Brazen” figured out his timing and made him pay.

As the challenger leaned forward for another takedown, Abbasov cracked him with a picture-perfect knee to the head, which sent his dazed rival stumbling backward. The Kyrgyzstani dynamo attacked with ferocious right hands, and when Nakashima grabbed the left leg, the defending titleholder connected with another knee to the head.

The MMA Lab product backpedaled away from his rival’s punches and then desperately tried to hit a takedown, but Abbasov stuffed his attempts and landed some uppercuts that forced the discombobulated American to fall. Abbasov then charged at Nakashima and pummeled him with two heavy hammerfists, which caused the referee to wave off the action at 3:27 of round four. 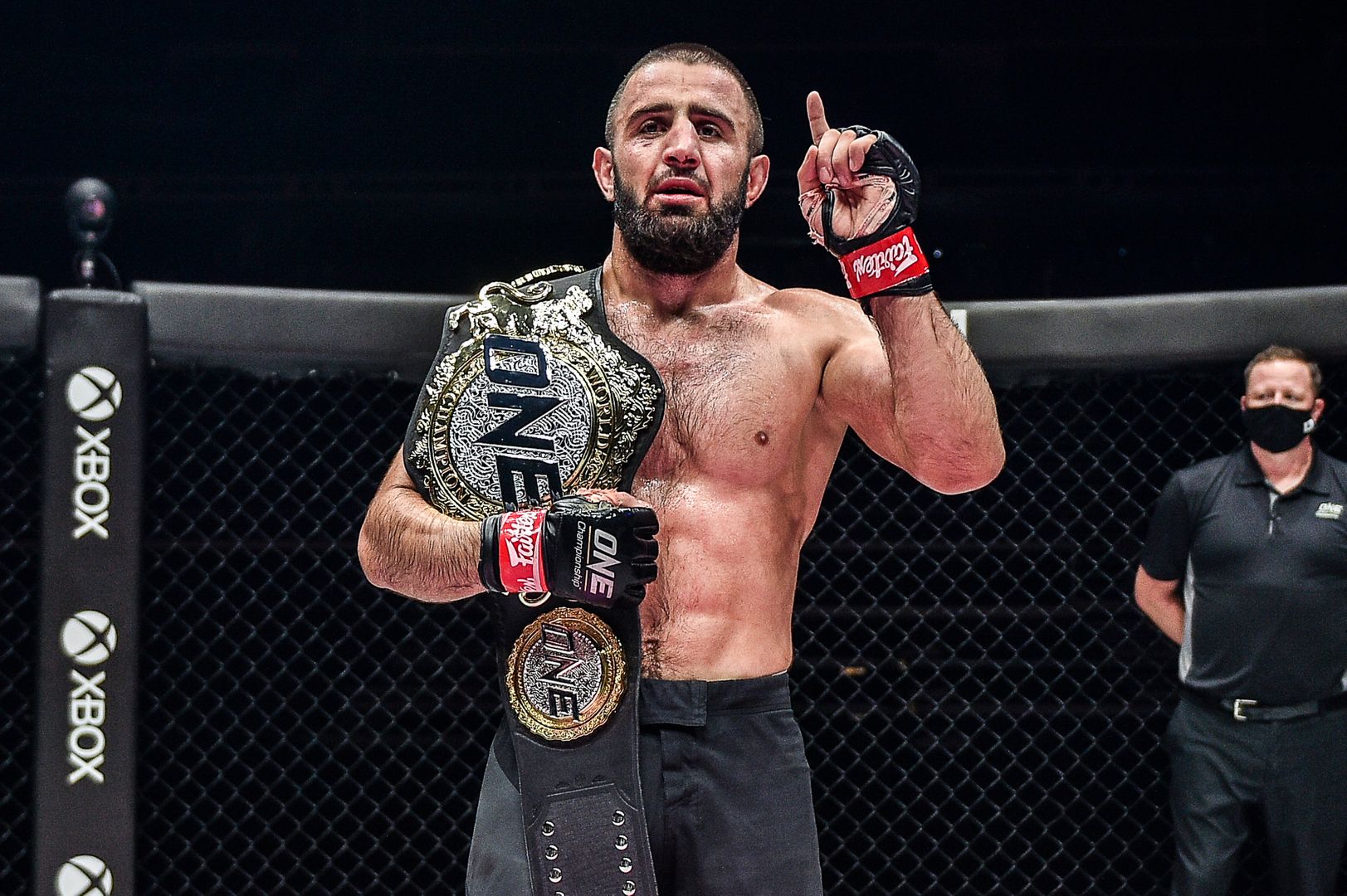 The impressive TKO victory improved Abbasov’s professional record to 23-4 and proved that he could remain the ONE Welterweight World Champion for a long time to come.

“I’m ready to defend this belt again and again,” he said in his post-fight interview. “As I said, I am the king here. I’m not going to give it away to anyone. This is my Circle, my belt, and I don’t care which opponent they are going to give me next.”