It has been a crazy year of incredible World Title bouts in ONE Championship.

From the five-round war between Aung La N Sang and Ken Hasegawa, to the back-and-forth rematch between Angela Lee and Mei Yamaguchi, each one has been remarkable in its own way.

Between the hard-hitting battles that have hogged so many of the headlines, I believe one contest has flown under the radar, despite its brilliance.

While I admit the rematch between Yoshitaka “Nobita” Naito and Alex “Little Rock” Silva did not have the same hard-hitting thrills as some of the other bouts seen this year, it deserves a little more love for its technical excellence.

If you were after the thrills of a wild brawl, your attention should be focused elsewhere, but if you are a mixed martial arts purist and wanted to see two-world class athletes engage in a combat chess match, this was for you.

This sport is often compared to “The Game Of Kings,” but few bouts live up to the comparison. This one did.

You could see strategies play out and the two heroes thinking several moves ahead – though neither one was able to score a checkmate on his opponent after five rounds.

In their first bout, last December, Silva earned the ONE Strawweight World Title and handed his Japanese rival the first defeat of his career. His striking attack in the early rounds gave him a commanding lead, which he maintained by stifling Naito’s attempts to take the bout to the mat. 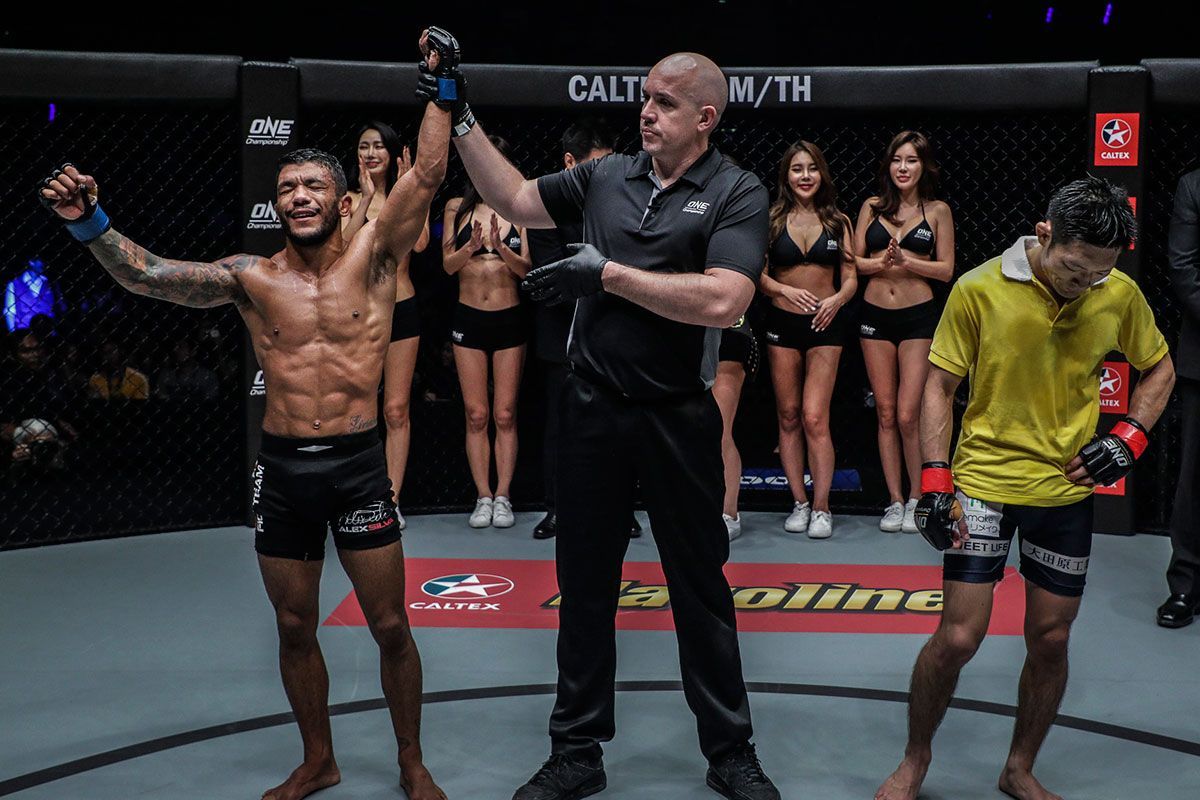 “Nobita” had ways to win when they locked horns again at ONE: GRIT & GLORY in Jakarta, Indonesia, in May, but it looked like he would need to execute a perfect game plan to get the belt back.

Though he admitted he had underestimated Silva, and was crestfallen after losing the World Title, the Japanese martial artist said a fire had been lit under him, and he was more focused than ever to redeem himself.

From the first bell, it looked like the strategy his team at The Paraestra Matsudo gym had formulated would work wonders.

The 34-year-old took the center of the cage and fired shots at Silva. He was much more aggressive than in the original match-up.

Silva landed a big leg kick – the source of his most success in their first encounter – but Naito was no longer a standing target for heavy shots. He switched stances, moved in and out of range, shifted his head position, and stayed in his opponent’s face to diminish the effectiveness of his strikes. 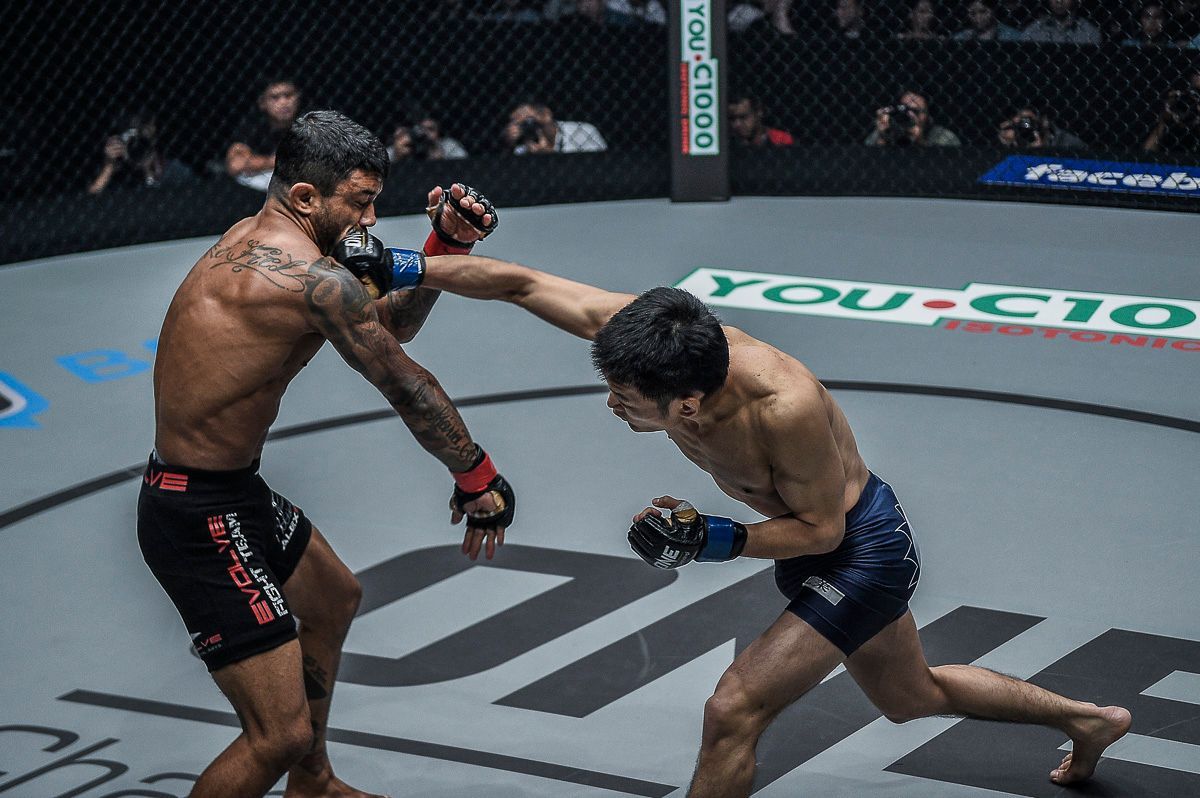 Within a minute, he shot for his first takedown to take the contest to the mat – where he would have the most success. He only succeeded in pinning the Brazilian against the cage on that occasion, but it would not be long before he had his way.

His second shot did not look like it was effective either, as the champion defended and backed up against the fence again. But, using a right-side underhook, the challenger was able to snap Silva to the ground and land straight into half guard.

Silva’s butterfly guard meant “Nobita” could not advance his position, but he did not need to. He stopped “Little Rock” from improving position by controlling one of his arms and frequently dealt damage with ground and pound – releasing his grip every few moments to fire punches to the face and body.

Sweep attempts were stifled, as Naito stayed heavy with his hips on top of the Evolve MMA representative, which also caused Silva to drain his reserves of energy. Submission attempts were also met with composed defense from Naito.

The first round set the tone for the rest of the match, as “Nobita” did everything he wanted to do in their first meeting, but could not. 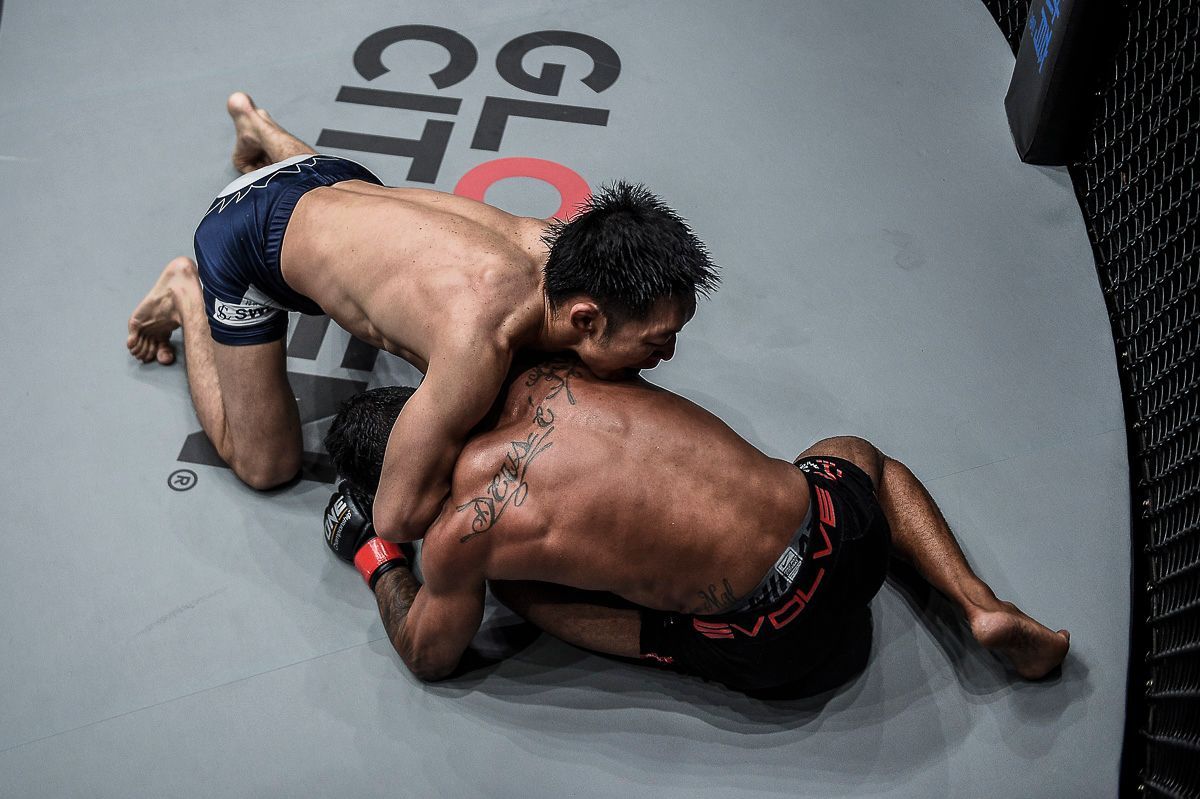 In round two, the game plan – based on patience and precision – proceeded as before.

“Little Rock” attempted a single-leg takedown, but could not complete the technique, and Naito was in no rush to move and get himself into trouble. He spent almost a minute and a half against the cage, keeping the Brazilian at bay with whizzer control, waiting to strike.

His hold on Silva’s arms gave him the opportunity, eventually, to reverse him and drive him into the mat. From there, once again, he worked to maintain position, punctuating his efforts with regular flurries of strikes with one hand.

These were not punishing blows like Shinya Aoki’s assault on Shannon Wiratchai at ONE: REIGN OF KINGS, but they allowed him to pull away on the scorecards.

In contrast, when the pendulum swung his adversary’s way, no strikes came at Naito, who dealt with submission threats with ease.

As the round ended, he had coolly re-established top position to continue his attack on the champion. 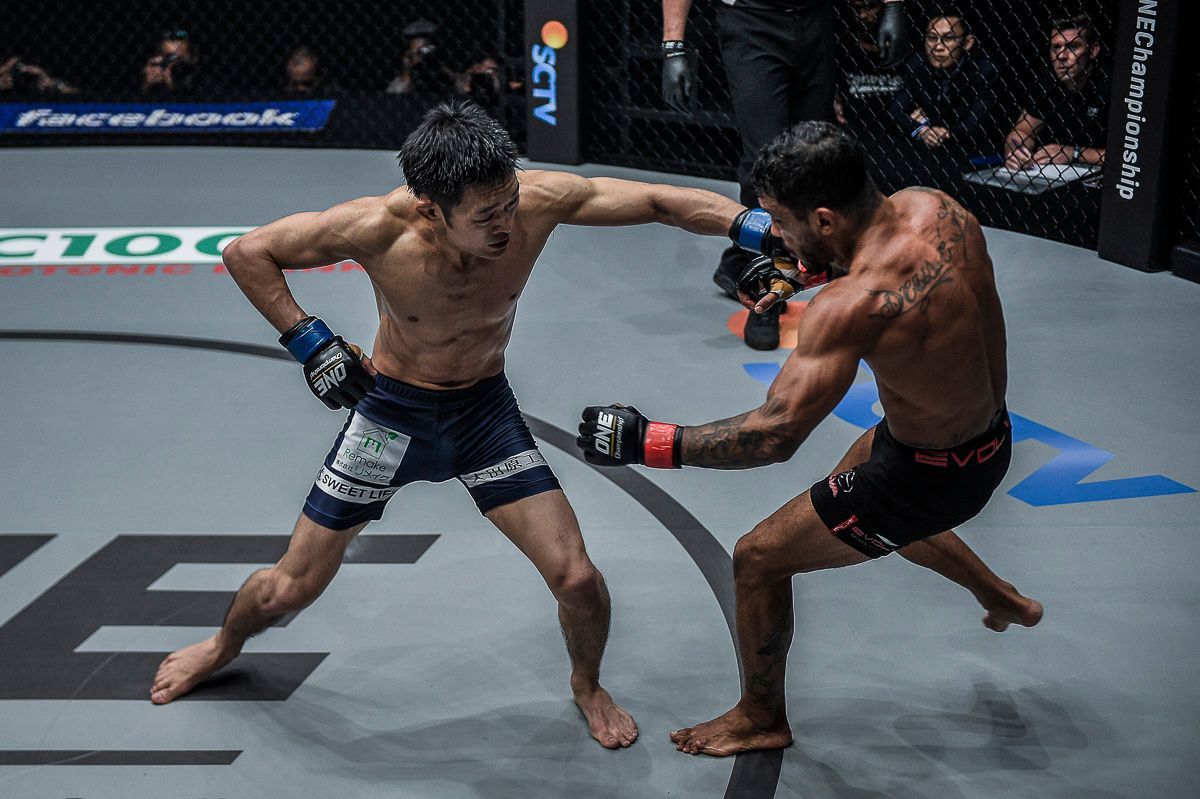 All this effort had the effect he was looking for. In their first contest, Silva began to fade in the championship rounds, despite being in control of the action. Forced to defend, his gas tank emptied more quickly.

Naito took advantage at the start of the third round. Silva resorted to throwing looping punches, which were easily evaded, and then countered by the Japanese grappler’s heaviest punches of the bout.

When Silva tried to score big with a left body kick, Naito caught it and lunged forward with a takedown. Only a brilliant rolling counter from Silva stopped the start of another spell of dominant ground work from the former champion.

However, Naito still managed to methodically make his way back into control. He slid onto Silva’s back, grabbed a body lock from behind, kept control of the Brazilian’s right leg, and then turned onto his knees to hit a perfect double-leg takedown.

The Japanese star’s confidence was clearly building, and in an audacious move, he then took the back of the Brazilian jiu-jitsu world champion. However, instead of establishing his hooks, he rendered Silva ineffective on the mat for a moment by entangling his legs from behind. 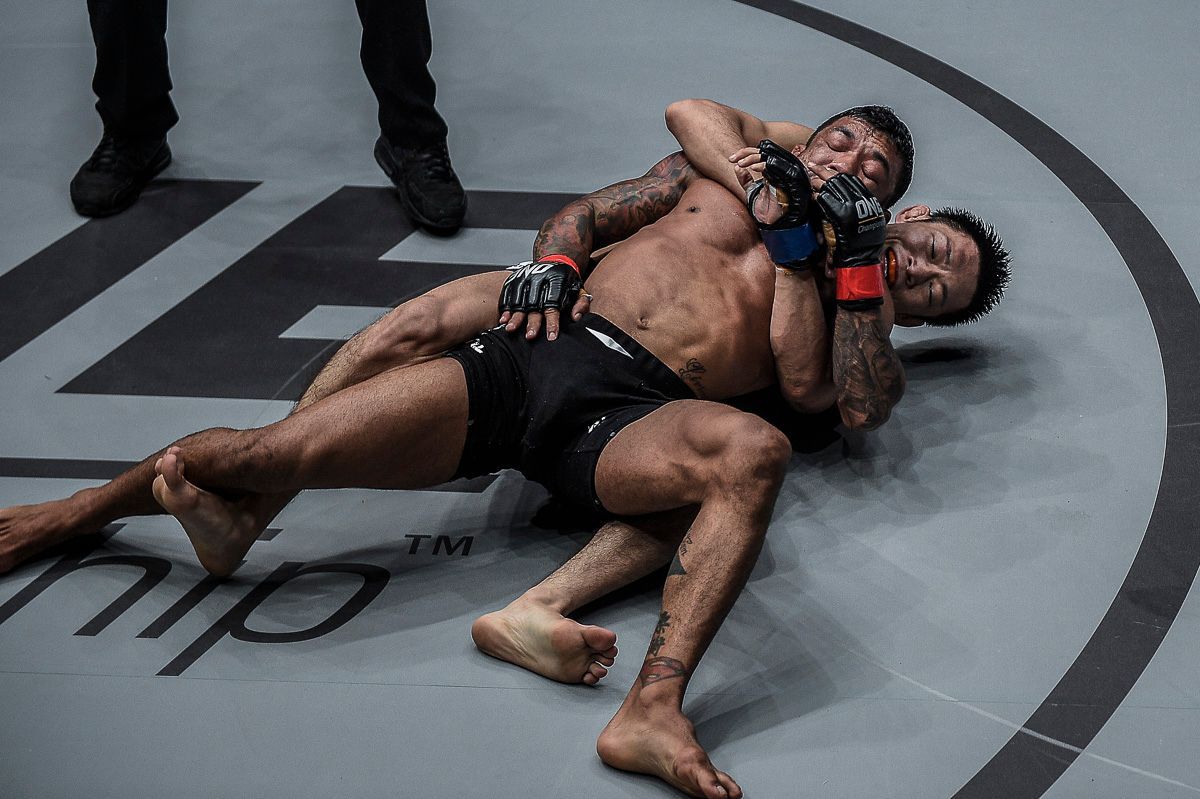 Of course, Silva was not about to fall on his sword, and was able to attack for submissions again, but Naito always seemed to find a way to defend or escape.

When Silva was on top – a terminal position for almost any other opponent – Naito stayed tight to him, refusing to give an inch and allow any serious threat of a submission.

The fourth and fifth frames told a similar story, as Silva’s submission threats never seemed to progress to develop to genuine submission attempts, and acted as precursors to more Naito advances in position.

“Nobita” stayed busy, rolling to take the back when Silva thought he had prevented punches, or hooking his leg away to flatten him out, just when the champion looked like he had defended a double-leg attempt with a strong base.

Naito went back to everything he had done well up to that point, controlling the final two and a half minutes of action. Although one judge favored “Little Rock” and a split decision was announced, there was no doubt in most peoples’ mind that he was the clear winner. 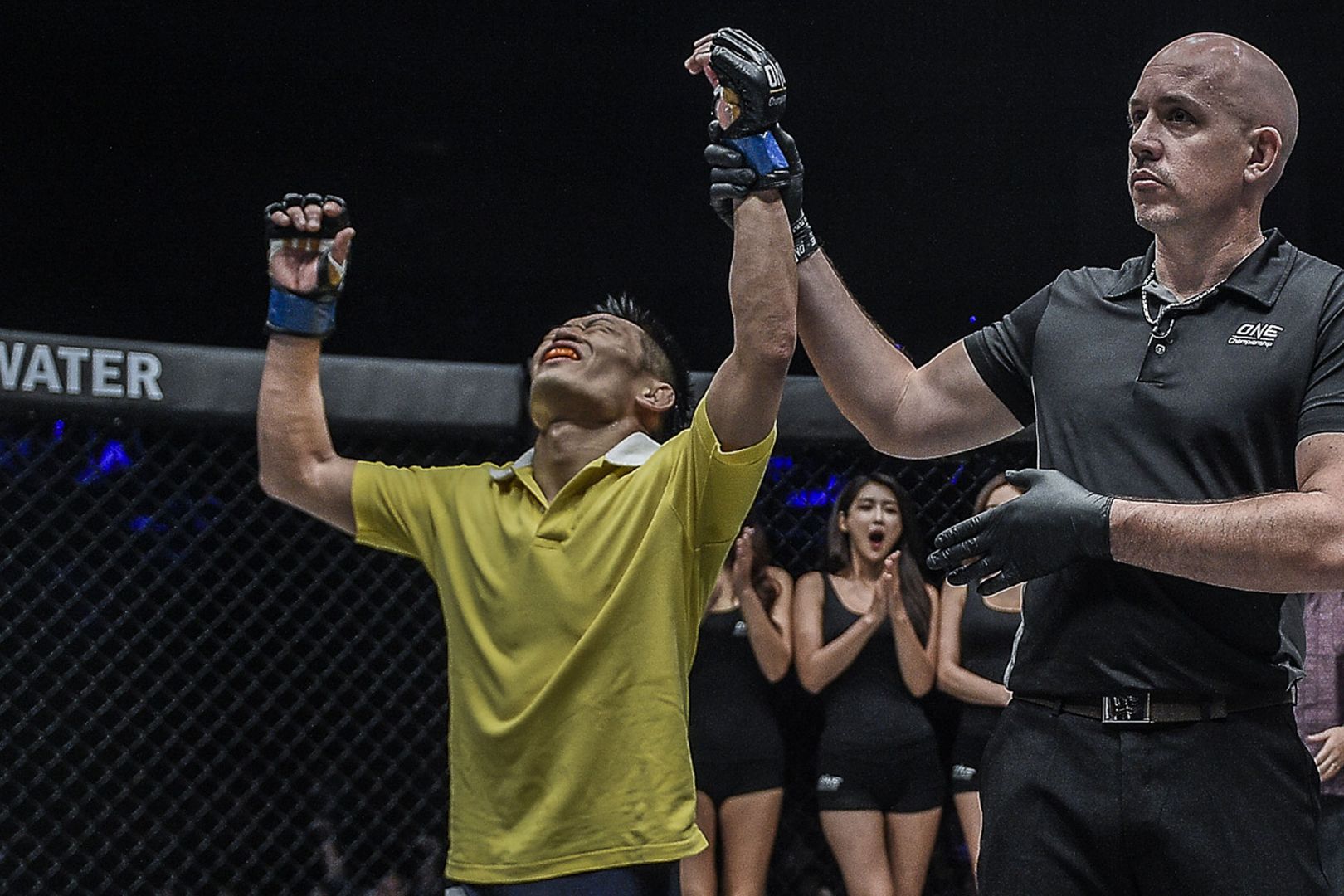 Having the ONE Strawweight World Title wrapped around his waist for the second time was a proud moment for the man from Matsudo, Japan.

Everything he had worked for had come to fruition. He had shown the spirit and skill of a true martial artist to improve in all areas, and redeem himself in front of the world.

He dominated a BJJ world champion in grappling exchanges, and improved on his feet to triumph in a realm he was resoundingly outclassed in during their previous meeting.

Though Naito may have to contend with surging strawweights like Joshua “The Passion” Pacio and Rene “The Challenger” Catalan, he is tied at 1-1 with Silva, so expect another bout in the future if they can maintain their places in the upper echelons of the division.

If Naito continues to improve and Silva can match his huge strides, we should be in for a fascinating rubber match.

Michael Owens is the Deputy Editor of onefc.com. All opinions are the writer’s own.