For ONE Women’s Atomweight World Champion “Unstoppable” Angela Lee, it was a miracle to even make it back to the cage to defend her coveted title.

After miraculously surviving a harrowing car accident last November, the emotional Singaporean felt blessed to even be sharing the cage with Japanese challenger Mei “V.V.” Yamaguchi for a second time.

The two skilled martial artists engaged in another captivating bout at ONE: UNSTOPPABLE DREAMS on Friday, 18 May, and after five rounds of non-stop action in front of a capacity crowd at the Singapore Indoor Stadium, the local favorite retained her belt.

Both the world champion and challenger had success in a first stanza that played out entirely on the feet. Lee was eager to showcase her improved striking skills, and landed well with straights and low kicks. But the solid counter right of Yamaguchi also found a regular home. In the clinch, it was all “Unstoppable,” as she punished the Japanese athlete with knees and elbows on the fence.

In stark contrast, the second round was contested almost solely on the mat, with Lee tripping her foe early on. The Singaporean representative landed a piston-like right hand and crunching elbows from the top, and came achingly close to submitting her opponent with an armbar. Only the grit of Yamaguchi kept her in the bout, where many others easily would have tapped.

Lee stayed true to the game plan in the third, staying long with her punches and low kicks. However, Yamaguchi looked more comfortable closing the distance, and began to land the right hand regularly enough to swing the momentum back in her favor. With perfect timing, the Singaporean hit a sharp takedown, and locked in a tight rear-naked choke. Yamaguchi hung tough, and was saved by the bell.

The fourth round opened up with more low kicks and punches from Lee, but the Japanese challenger was aiming for the money shot, repeatedly trying to time a big right hand. Lee’s distance kept her at bay, as she peppered away at Yamaguchi’s lead leg, until “V.V” managed to tumble her to the mat later on in the stanza.

Yamaguchi silenced the Singapore fans briefly, as she caught Lee’s kick and landed a solid counter right. She followed it with a high kick right on target.

“Unstoppable” looked fallible for the first time as she hit the mat. The Japanese combatant spent most of the final stanza in top position trying to chip away, but the champion did a great job of keeping her opponent contained and limited the damage taken. 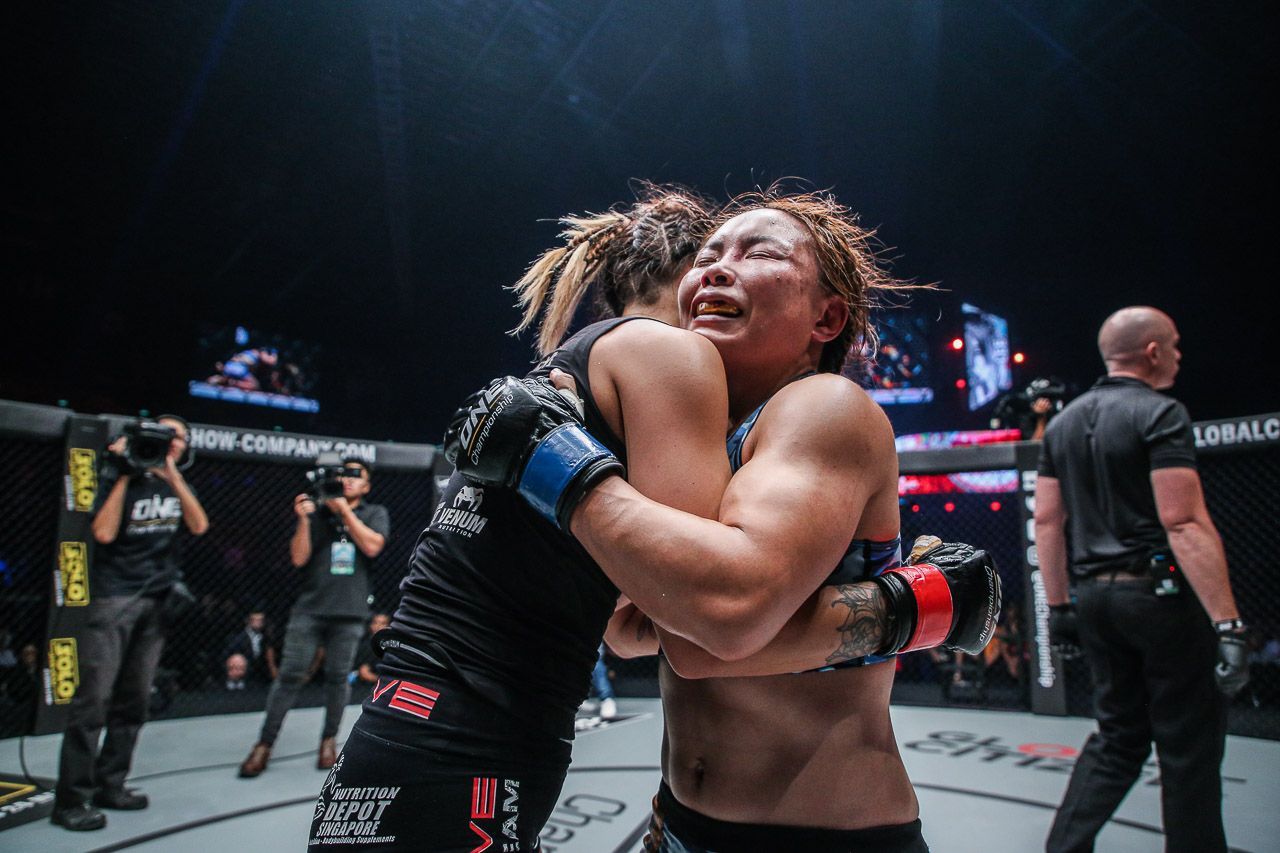 In the end, the judges awarded Lee the unanimous decision. The Singaporean, whose record now stands at 9-0, continues to impress and improve with every outing.

“Mei is an incredibly tough opponent. Major props to her, it was an amazing fight,” Lee said, paying tribute to her longtime rival.

Yamaguchi is a perennial contender and one of the best atomweights in the world, but she came up short in her second chance at the world title. She was only inches from success, so some small adjustments may see her clinching the gold in the future.