Nong-O Gaiyanghadao reminded the world why he is arguably the greatest Muay Thai athlete on the planet with a sensational performance on Friday, 22 November.

Though he faced his toughest test in years against Saemapetch Fairtex, he overpowered his young, hungry challenger and knocked him out with a stunning punch in the fourth round at ONE: EDGE OF GREATNESS.

His victory at the Singapore Indoor Stadium was his third and most impressive defense of his ONE  Bantamweight Muay Thai World Title to date. In the past, he has employed a more technical and tactical approach, but fans saw the legend of “the art of eight limbs” at his brilliant best this time.

After a tentative first round, Nong-O came out of his corner with all guns blazing as he went after his first highlight-reel stoppage in ONE Super Series.

“At first, I was really nervous, but after a bit, I was able to completely focus on the fight itself,” he explains.

“In round two, I was really focused on my plan. If there was an opportunity to knock him out, I was going to take it.

“For every fight, my conditioning is good and I show up at 100-percent, but how the fight plays itself out depends on my opponent, what they bring, and what style they fight.”

The Evolve representative used trademark fakes and feints to set up his right kick and land it with full force, but he was also aggressive with his hands.

When his rival started to backpedal, Nong-O moved forward and went all-out. He was rewarded with his first knockdown after a flurry of punches, including a series of rapid-fire uppercuts.

Somehow, Saemapetch got back to his feet, and he also beat the referee’s count for the second time at the end of the round after he was hit with a similar combination.

“I was definitely surprised [about that],” Nong-O reveals.

“I figured that I had really got him with a clean shot but he was able to get up. He’s really strong!

“I felt confident that I could knock him out after the knockdown, but I didn’t want to rush it. I had to wait for the right moment and then go for it.”

It would be a little while before that moment came along because Saemapetch somehow recovered and had his best spell of the match in the third period.

His defense was on point as he checked and slipped kicks, and his offense looked dangerous as he ripped hard strikes to the head and body.

Despite the blows he absorbed, Nong-O’s confidence did not waver, and he weathered the storm.

“I was more focused on following my own plan,” he adds.

“I told myself not to rush or be scared, and wait for the opportunities to come up in the fight.”

His patience paid off in the first of the championship rounds. His opponent’s intensity faded, and he capitalized by nailing him with a straight right that knocked him flying onto his back. This time, no count was needed, and the contest was immediately waved off due to a one-punch KO. Although the 25-year-old from Pattaya was finished dramatically, he was quick to return to his feet and congratulate his conqueror, who also showed his respect.

Nong-O held his challenger in high esteem before they faced off, and after going toe-to-toe with him, he still believes he will go on to achieve great things.

“There is nothing I have that Saemapetch can’t handle. He’s a good fighter, but everything depends on timing and opportunity,” says the man from Singapore.

“Saemapetch is a good-natured person who always stays humble. We showed respect for each other as brothers before and after the fight – I really believe in this.

“Saemapetch still has a lot of opportunities to gain experience and develop skills. He is still so young, and very strong. He has the ability to earn money to support the family for a long time.” 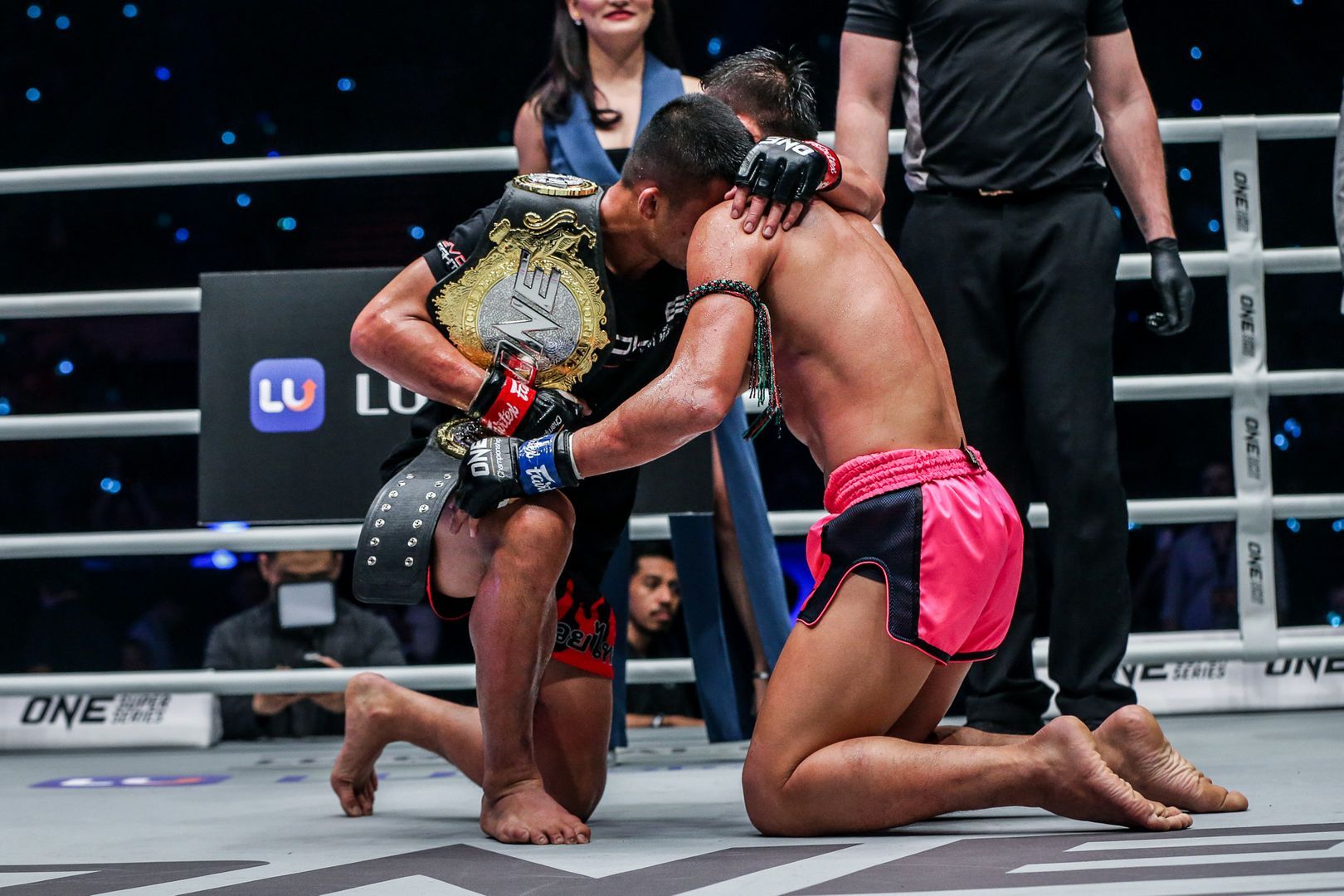 For now, he has accepted that he was well-beaten by “his idol” in Singapore, and he will have to wait for his chance to hold the most prestigious prize in his sport.

On the other hand, Nong-O can look forward to continuing his reign into 2020, when he also has his eye on adding to his collection of gold.

“I just want to keep fighting and keep working so that I can save money for my children’s future,” he says.

“My heart wants to try kickboxing, and possibly, if the opportunity presents itself, I’d like to fight for another World Title.”

Read more: The Best Pictures From ONE: EDGE OF GREATNESS