“Smokin” Jo Nattawut must overcome the toughest challenge of his career at ONE: DREAMS OF GOLD to make it into the final of the historic US$1 million ONE Featherweight Kickboxing World Grand Prix.

Next Friday, 16 August the 29-year-old will return to his native Thailand to rematch Giorgio “The Doctor” Petrosyan and try to avenge his only ONE Super Series defeat.

If the Bangkok Boxing representative can pull off a shock result and get his hand raised at the Impact Arena, he will book his place in the tournament final in October.

“I’m excited about the rematch, I’ve been wanting this fight for a while now,” he says

“I didn’t think too much about the first fight [during my preparation] – he was the better fighter that night – but this time around, I am more prepared and better trained. I’ll be bringing a better version of myself.”

Nattawut is a three-time Muay Thai World Champion, but he is comfortable competing under kickboxing rules.

He favors striking over clinching, so the transition from “the art of eight limbs” was fairly straightforward – as he showed with a win against fellow semifinalist Samy “AK47” Sana, and with a knockout in the tournament quarterfinals against Sasha Moisa.

However, defeating “The Doctor” is a different kind of challenge, as “Smokin Jo” knows first-hand.

In their first encounter, Nattawut held his own against the five-time kickboxing World Champion, but he was outclassed over three rounds and lost a clear unanimous decision. Petrosyan was just too fast, too accurate, and too elusive for him on that night.

That was more than a year ago, though. Now, Nattawut is riding a four-bout winning streak in The Home Of Martial Arts and he is ready for the challenge ahead.

He has learned from his first encounter with his Italian rival, and though he is quick to recognize Petrosyan’s class, he is much more confident about their second meeting.

“I don’t think he has any weaknesses as a fighter, but his boxing is his biggest asset. He’s got it all – technique, speed, and agility,” Nattawut says.

“But, I have prepared accordingly and will be bringing my best. My plan is to keep it simple and perfect the little things.

“I didn’t prepare anything special, I am just keeping it basic and making sure I am in the best possible shape.”

Nattawut has waited almost three months to get back in the ring, but Petrosyan was in action just a few weeks ago at ONE: MASTERS OF DESTINY.

On that night in Kuala Lumpur, Malaysia, “The Doctor” booked his bout with Nattawut, but it took him two contests against Petchmorakot Petchyindee Academy to get this far, and his upcoming opponent spotted some potential ways to get the edge against the Italian.

“Petchmorakot backed up too much in the third round, whereas Petrosyan was a lot more active,” he explains.

“I’ll need to stay busy. It will be important for me not to back up in this fight. I’m going to have to work really hard for this win.

“I don’t feel either of us are going into this fight with an advantage. He’s going to be preparing really hard, as I am. We’re both coming to win.”

One more thing that may work in “Smokin Jo’s” favor is the chance to compete on home turf at the Impact Arena, where thousands of fans in Bangkok will raise their voices to support the tournament’s last remaining Thai competitor.

While the noise is sure to push him forward, and create an intimidating atmosphere for Petrosyan, the national hero will not count on any outside influence to win him the bout.

“It doesn’t really matter the location, wherever I fight, it feels the same when I get in the ring,” he says.

“It will be great to have the Thais cheering for me, but it is just me and him in there and that is what I need to focus on.”

A win over Petrosyan would secure Nattawut a spot in the final of the ONE Featherweight Kickboxing World Grand Prix against either Sana or Dzhabar “Genghis Khan” Askerov – who will also meet at ONE: DREAMS OF GOLD.

That final match will take place at ONE’s landmark ONE: CENTURY event, but Nattawut refuses to be drawn on talk of what may lie ahead.

He knows he has a colossal task ahead of him, so he plans to take his career one step at a time.

“Thinking about winning can get you ahead of yourself sometimes, so it is best to first focus on the task at hand,” he says.

“We’ll just have to wait and see what is going to happen in the ring.” 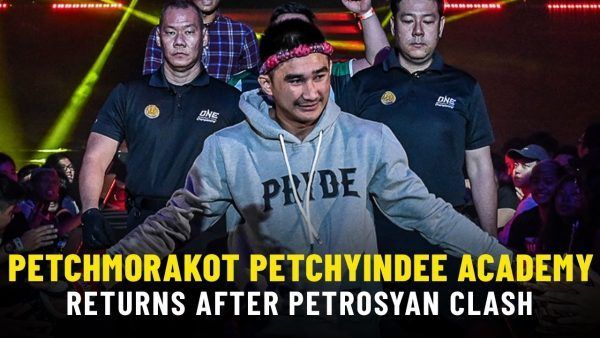