The stars of ONE: A NEW ERA squared off against their rivals on Thursday, 28 March at the official kick-off press conference ahead of the most epic card in ONE Championship history.

Opponents went face to face at the Ritz Carlton in Tokyo, Japan and answered questions from the world’s media just days before the event, which will take place at the Ryoguku Kokugikan this Sunday, 31 March.

Four World Title bouts will headline the card, which will also feature the highly-anticipated debuts of both Demetrious “Mighty Mouse” Johnson and “The Underground King” Eddie Alvarez, as well as a legends’ kickboxing rematch between Yodsanklai IWE Fairtex and Andy “Souwer Power” Souwer.

At the top of the card, ONE Lightweight World Champion Eduard “Landslide” Folayang will defend his belt against Japanese superstar Shinya “Tobikan Judan” Aoki.

In their first meeting, Folayang hit a third-round TKO to stun the martial arts world and take the gold away from his rival. This time around, the Filipino is stepping into his opponent’s backyard, but he is still predicting victory from what should be an exhilarating main event. “This rematch is three years in the making,” Folayang said.

“It’s an honor to face Shinya again here in Japan. I believe this fight is going to be an explosive one.”

Aoki will compete in his native land for the first time in more than three years, and he focused on how happy he was to make his competitive return in Tokyo, as well as talking up his chances of getting his hand raised.

“I am thankful that ONE Championship is in my home country. This is a great step forward for martial arts in Japan,” he said.

“I am laser focused for this coming match. I’ve trained very hard for my opponent. This Sunday night, I am confident I can achieve victory and become World Champion once again.” Now Lee has recovered from a back injury that delayed this historic clash, she is confident about delivering an unforgettable battle with her adversary.

“This event right here is by far the biggest event for ONE Championship and the one thing I can guarantee you on the 31st of March, history will be made,” Lee said.

“I think her style and my style match up perfectly. I believe that we’re both aggressive, forward-pressure fighters, we’re going to meet in the middle in that cage on Sunday night, and we’re going to see what happens.”

For her part, Xiong showed a lot of confidence in her ability to defend her belt and thwart Lee’s dreams of becoming a two-weight world champion.

“I will face a very tough opponent in Angela Lee, but I will defend my World Title and my glory,” Xiong added.

“I will prove I’m the best. I know I will face a lot of adversity in this fight, but I am prepared.” 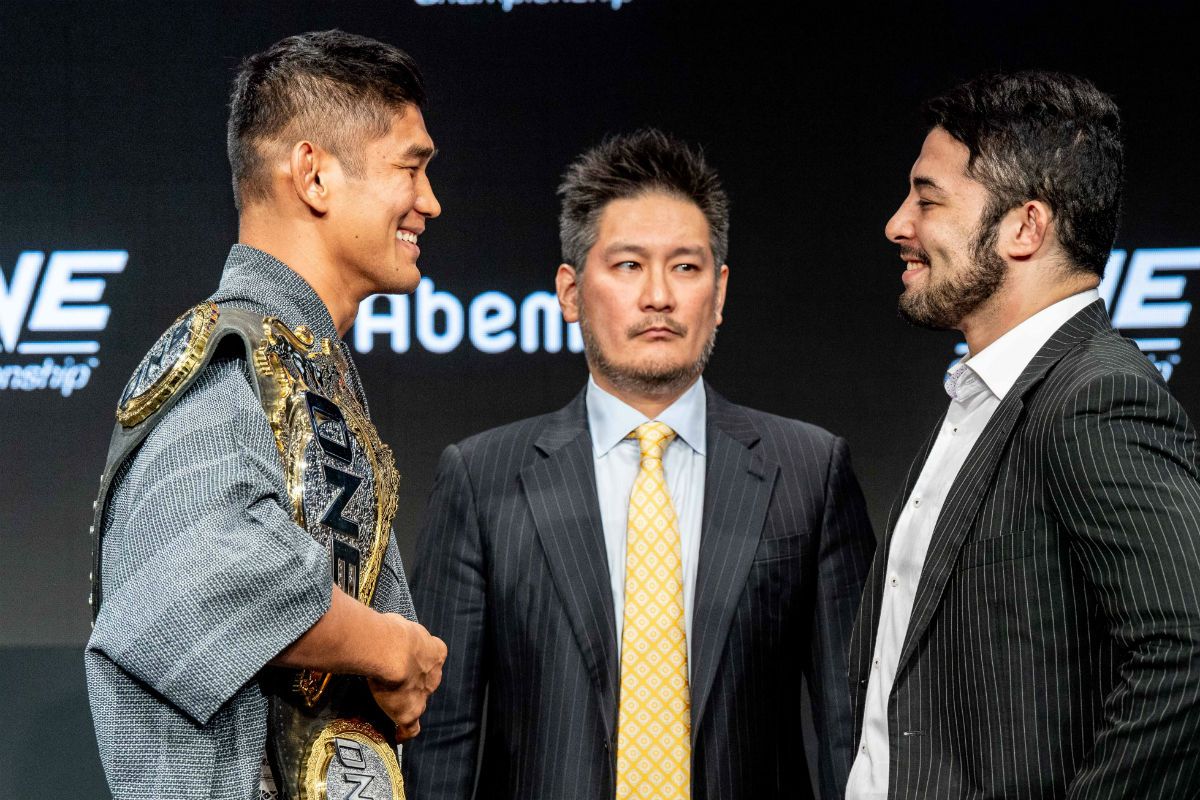 Last June, ONE Middleweight World Champion Aung La “The Burmese Python” N Sang and Ken Hasegawa put on an incredible war that has come to be regarded as the greatest in ONE history.

Aung La N Sang ultimately came out on top to defend his crown, and he has no plans of surrendering that belt on Sunday night.

“It’s an honor and a dream come true to be able to come and compete in Japan,” Aung La N Sang said.

“It’s a dream come true, and I took this really seriously. I put on a 12-week camp for this match and I’m super excited to put on a show for you guys on Sunday.”

Hasegawa is also confident of getting his hand raised this time in his hometown. He promised his Japanese fans that he would put everything on the line once again to dethrone the Myanmar icon.

“This rematch is very important for my career.

“Last year, we did battle, and I gave everything I had. This time, I plan to do the same. I am willing to do whatever it takes to win.

“Aung La N Sang is an amazing World Champion, but I plan to shock the world this Sunday.” 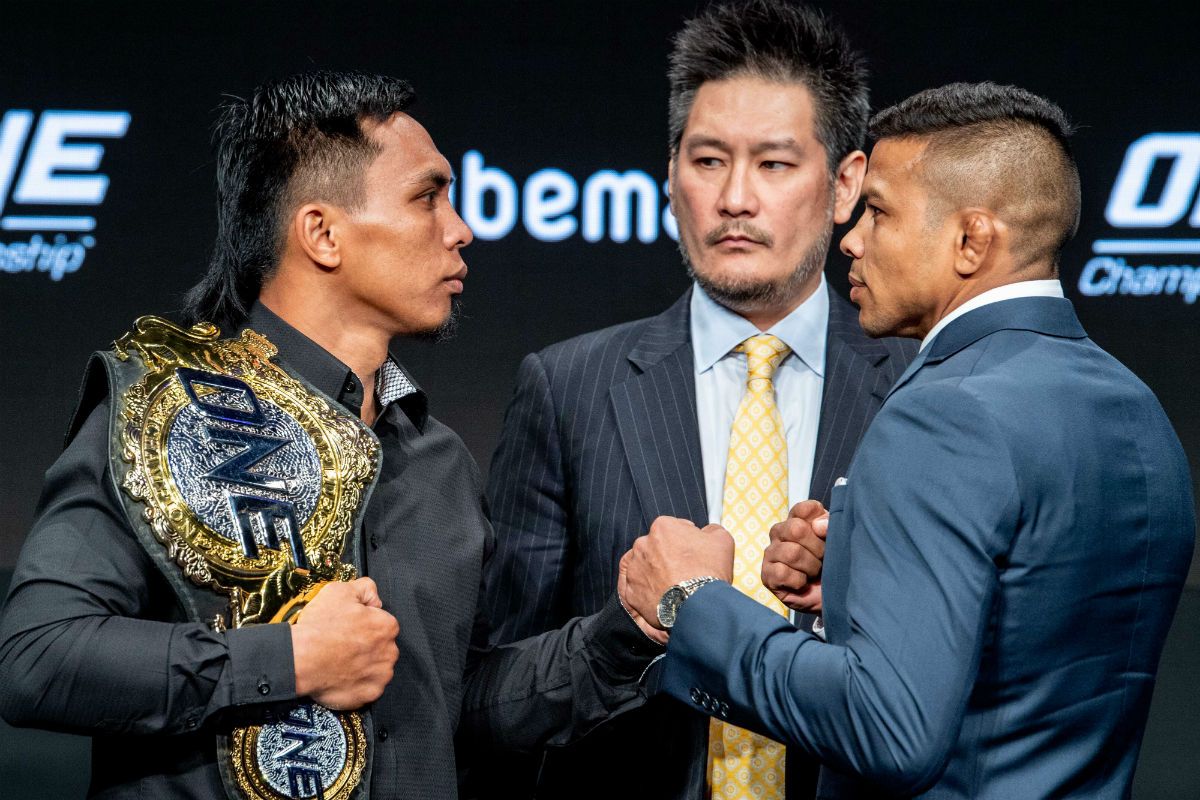 The quartet of World Title match-ups at the top of the card will commence when Team Lakay’s Kevin “The Silencer” Belingon meets former ONE Bantamweight World Champion Bibiano “The Flash” Fernandes for the third time.

They have split the previous two meetings, but the defending World Champion was confident a repeat result from their second bout would be in the offing on Sunday.

“I know this is our trilogy match with Bibiano. I’m very excited for this fight,” Belingon said.

“I trained hard for this one. I’m 100-percent ready and confident for this fight.”

The last time these two bantamweights met, the margin of victory was tight. The judges awarded the Filipino hero a split decision, which has never sat well with Fernandes.

Now, he is more determined than ever before to wrap that ONE Bantamweight World Title around his waist again.

“Now it’s time for my rematch here. I’m back, and I will take the belt back.” While he may not be competing for a World Title on Sunday night, Demetrious Johnson knows exactly what’s at stake in a showdown against Yuya “Little Piranha” Wakamatsu.

Johnson is the most dominant World Champion in the history of mixed martial arts, but he is more than happy to climb back up the ranks on the global stage in the ONE Flyweight World Grand Prix.

“It’s been a long time coming to come out here to Japan and fight in front of my Japanese fan base in ONE Championship,” Johnson said.

“If you look at all my fights, my World Title reign, I’m always going out there looking for the finish – either knocking my opponent out or submitting them. So with this, I’m looking forward to going out there, pushing the pace, and hopefully getting the finish.” Fellow American Eddie Alvarez has been looking forward to his return to The Land Of The Rising Sun, and he left nothing to chance in his preparations to face Russian sensation Timofey Nastyukhin.

The end goal for Alvarez has always stayed the same since signing with The Home Of Martial Arts last year, and that has definitely motivated him ahead of ONE: A NEW ERA.

“It’s the only one I don’t have, so that’s all I’ve got my eyes on. My mind and body are ready. I’m ready to perform.”

Nastyukhin also seemed laser-focused on the task at hand as he looks to pull off the upset and defeat Alvarez in the opening round of the ONE Lightweight World Grand Prix.

“I’m very glad to have such a great opponent,” Nastyukhin added.

“I respect him as a fighter, and I’m sure that we’ll show you a great performance on Sunday night.” Souwer expressed how much respect he has for Yodsanklai, but was adamant he would make history repeat itself and emerge with the victory.

“It’s already 11 years ago that I fought Yodsanklai, one of the strongest fighters I’ve ever met,” Souwer says.

“This Sunday, I’m going to show the world that I’m still the best even though I’m already two decades [into my career] in the martial arts world. I will perform. I will win.”

With more than 200 victories on his résumé, Yodsanklai has faced the best of the best for the past 17 years, and it would feel sweet to avenge his prior loss while adding Souwer’s name to his win column.

“I am excited for this rematch,” Yodsanklai says.

“ONE Championship has given me the platform to showcase my skill. I have worked very hard in my training so I can give a great performance this coming Sunday.”