Since the inaugural ONE Middleweight World Title bout in November 2014, there has barely been a dull moment when gold was on the line in this fascinating division.

Whether match-ups have finished quickly or gone the distance, every single tussle at the top of the weight class has been packed with unforgettable entertainment – including three of the top five bouts in ONE Championship history.

One of the men who is responsible for many of these great moments is reigning titleholder Aung La “The Burmese Python” N Sang, and he will return to defend the belt for the second time against Mohammad “O Lutador” Karaki at ONE: PURSUIT OF GREATNESS.

This contest on Friday, 26 October promises to continue in the tradition of memorable match-ups as an undefeated challenger takes on the all-action national hero at the Thuwunna Indoor Stadium in Yangon, Myanmar.

Ahead of this battle, relive the incredible history of explosive ONE Middleweight World Championship bouts and find out why this division’s competitors always deliver. 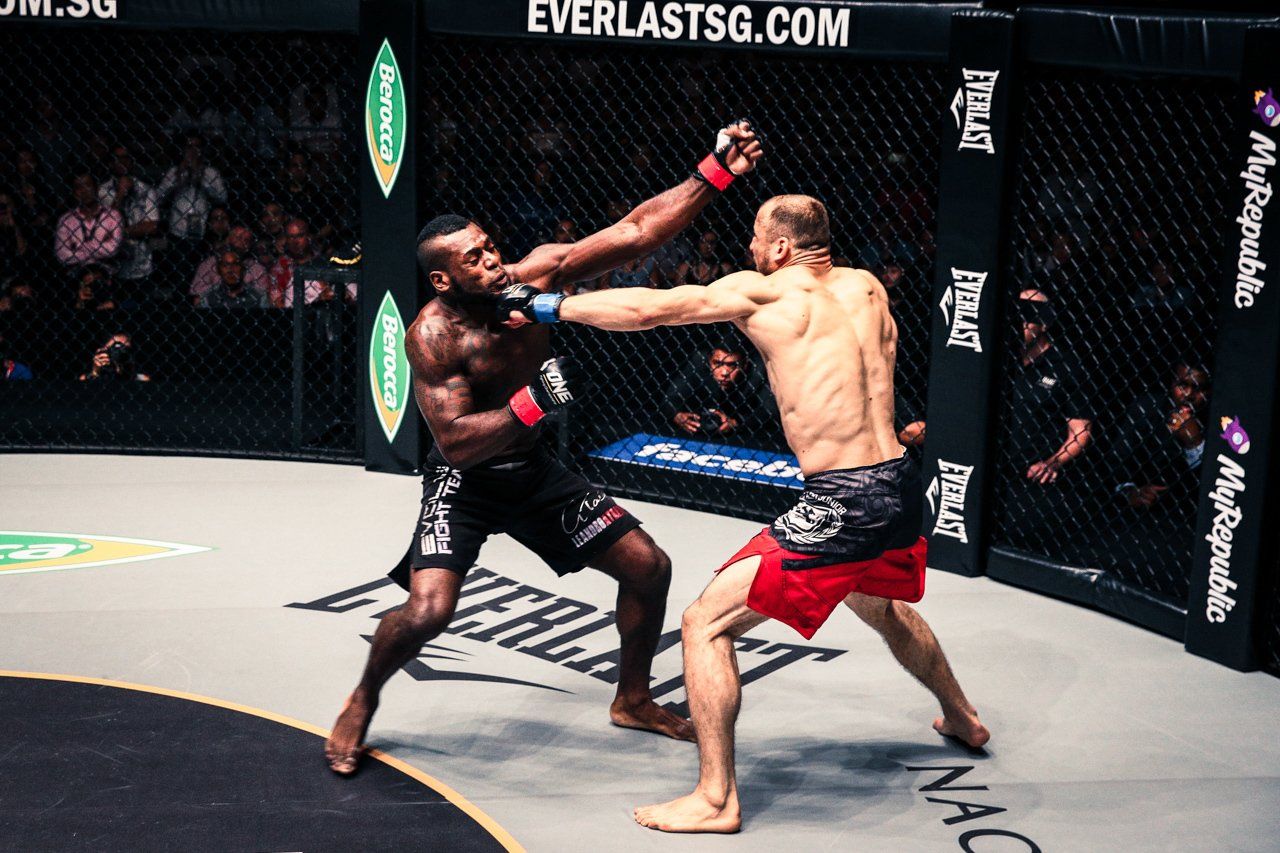 The action in the inaugural ONE Middleweight World Title bout did not last long, but no one who saw it would forget it in a hurry.

When undefeated Brazilian Leandro “Leo” Ataides faced off against Kazakhstan’s Igor “Lionheart” Svirid at ONE: BATTLE OF LIONS in Singapore, a stoppage seemed likely.

Both men were proven finishers, but no one would have expected Ataides would be dropped with the first punch of the bout – a stiff jab from his opponent.

Svirid did not hesitate, and he swarmed on the Evolve representative to secure the finish in just 17 seconds.

Bigdash And Svirid Go Back And Forth

Vitaly Bigdash bringing down the ????

Vitaly Bigdash bringing down the ????Download the ONE Super App now ???? http://bit.ly/ONESuperApp

Posted by ONE Championship on Monday, September 17, 2018

It took 11 months for Svirid to get back in the cage to defend his crown, but it was worth the wait.

His opponent at ONE: TIGERS OF ASIA in October 2015 was the undefeated Vitaly Bigdash – a Russian powerhouse who came in with a perfect 8-0 record and a 100 percent finishing rate.

None of that seemed to matter to Svirid in the opening moments of his first defense in Kuala Lumpur, Malaysia, as he went after another quick finish and put the challenger on his back following a series of strikes.

Though Bigdash survived, he was dropped multiple times in the first round and was close to being stopped at various points, but he was never out of the contest.

After the three-minute mark, he threatened with an armbar from the bottom, and then swept Svirid to attack with ground and pound.

Once the match went back to the feet, the Russian ended the period with a huge knee that dropped his opponent, then came within seconds of finishing him via rear-naked choke. “Lionheart” was saved by the bell, however.

Bigdash was distraught, but once round two began, he only needed 36 seconds to finish the job. He connected with more punches on the feet and on the ground to seal World Title glory after a contest that packed in more twists and turns than most five-round battles.

The Russian’s Dominance Keeps Him On Top

Bigdash’s first challenger as World Champion was an unexpected one, as Aung La N Sang stepped up to face him on less than two weeks’ notice at ONE: QUEST FOR POWER in Jakarta, Indonesia in January 2017.

The Myanmar athlete came in with the confidence and calm demeanor of a man who had a full training camp, as he matched the Russian on the feet for much of the opening two rounds.

However, the lack of time to work on his takedown defense and cardio was telling in the second half of the contest, as the Russian dominated from top position with ground and pound to win a unanimous decision.

Bigdash’s offense overwhelmed “The Burmese Python,” but fans were impressed with the heart and determination he showed to make it to the final bell despite the odds that were stacked against him.

The world awaited the rematch, where he would have the chance to prove what he could do after leaving no stone unturned in his preparation.

A historic rematch for "The Burmese Python!"

Posted by ONE Championship on Sunday, September 30, 2018

Five and a half months after their first meeting, Bigdash and Aung La N Sang renewed their rivalry for a rematch in Yangon, Myanmar at ONE: LIGHT OF A NATION.

Once again, they would go the distance, but this time, the action would go back and forth for 25 minutes to give fans in the Thuwunna Indoor Stadium 2017’s best bout.

The battle began with arguably its most significant moment, as the man from Myanmar scored with punches to stun his opponent and put him onto the canvas. He worked hard for the finish, but Bigdash displayed the durability he became famous for when he won the belt and hung on for dear life.

After his early setback, the Russian fell back on his grappling in an attempt to impose his strength. Although he had some success with takedowns and ground and pound, Aung La N Sang clearly had more energy to battle back this time around.

The rest of the tilt went back and forth as “The Burmese Python” piled on the pressure when he was standing, and Bigdash pushed him all the way when he managed to initiate grappling exchanges. He pushed hard all the way until the final bell with takedowns and punches from the top.

In the end, the hometown hero had done just enough to claim a unanimous decision on the judges’ scorecards and make history as Myanmar’s first mixed martial arts World Champion.

The Greatest Bout In ONE History

After claiming the belt, Aung La N Sang set his sights on a number of other challenges before his first defense of the ONE Middleweight World Title. He submitted Alain Ngalani in the organization’s first Open Weight Super-Bout, and then struck gold again when he defeated Alexandre Machado to be crowned the ONE Light Heavyweight World Champion.

Almost exactly a year after his triumph over Bigdash, he returned to his natural weight class to take on Japan’s Ken Hasegawa at ONE: SPIRIT OF A WARRIOR.

“The Burmese Python” expected a tough match, but few expected him to be pushed as hard as he was – all the way into the fifth round. Both men went blow-for-blow in what stands as the greatest bout in ONE history.

Strikes landed flush to the head and body, and the athletes scrambled desperately for position for the first 20 minutes. Aung La N Sang probably had the edge going into the last round, but it was still anybody’s game.

However, the 33-year-old showed why he is a two-division ONE World Champion by digging deep to score a spectacular uppercut knockout to send his fans into wild celebrations.

If his next match with Karaki can come even close to matching the excitement in this incredible encounter, then the Yangon faithful will be in for a treat once again.