ONE Championship is back in Macao for another blockbuster evening of world-class martial arts action. The last time the promotion hit the popular Asian entertainment capital, a series of compelling all-action bouts ensued, and fans around the world were left full entertained.

As always, we take a look at the incredibly high stakes our heroes are competing for. This is what’s on the line for the biggest stars at ONE: KINGS & CONQUERORS on 5 August.

Posted by ONE Championship on Tuesday, August 1, 2017

ONE Bantamweight World Champion Bibiano Fernandes is ONE Championship’s longest-reigning world champion. Over the past four years, he has slowly cleaned house, one amazing performance at a time. He has overcome every challenge presented, dominating the competition with highly-technical Brazilian jiu-jitsu skills, and a consistently improving striking game.

Yet, as the list of worthy opponents gets shorter, American Andrew Leone poses Fernandes’ toughest challenge. Leone, who co-owns the renowned Bali MMA gym in Bali with his brother Anthony, owns victories over some of ONE Championship’s top talents. Impressive victories over Geje Eustaquio, Shinichi Kojima, and Koetsu Okazaki have earned him a shot at the title.

Furthermore, Leone poses a complete test for Fernandes, as the American possesses a well-rounded striking and grappling arsenal.

Should Fernandes emerge victorious once again, he can extend his current win streak streak to 13, and his record for most ONE title defenses to seven. He will be eager to keep his impressive run of results going, and strengthen his case as the greatest bantamweight of all time.

However, Leone knows that opportunities such as this are few and far between. If he can defeat Fernandes, he will realize his life’s dreams and ambitions, as well as start establishing a legacy of his own.

Posted by ONE Championship on Wednesday, August 2, 2017

Fans have had to wait a while for this highly-anticipated rematch. But now, nearly two years after the original classic, ONE Flyweight World Champion Kairat Akhmetov will take on Brazilian grappling ace Adriano Moraes once again.

Their first encounter ended in a razor-thin split decision, with Akhmetov upsetting then undisputed champion Moraes in November of 2015. It was Akhmetov’s first bout under the ONE Championship banner, and the Kazakhstani fighter shocked the world by scoring a huge upset.

Fast forward to 2017, and Moraes is champion once again, this time of the interim variety, as Akhmetov dealt with injuries and various issues which have kept him out of competition. Since losing his title, Moraes returned to action and regained his lost glory by defeating both Filipino striking ace Eugene Toquero and accomplished newcomer Tilek Batyrov.

Needless to say, Moraes dealt with both challenges the best way he knew how, by taking matters to the ground and using his world-class BJJ.

When Akhmetov and Moraes meet once more at the center of the ONE Championship cage, the two are expected to pick up right where they left off. Fans should expect another highly-technical wrestling and grappling showdown.

The winner, of course, earns the distinction of becoming the undisputed king of the ONE Championship flyweight ranks. 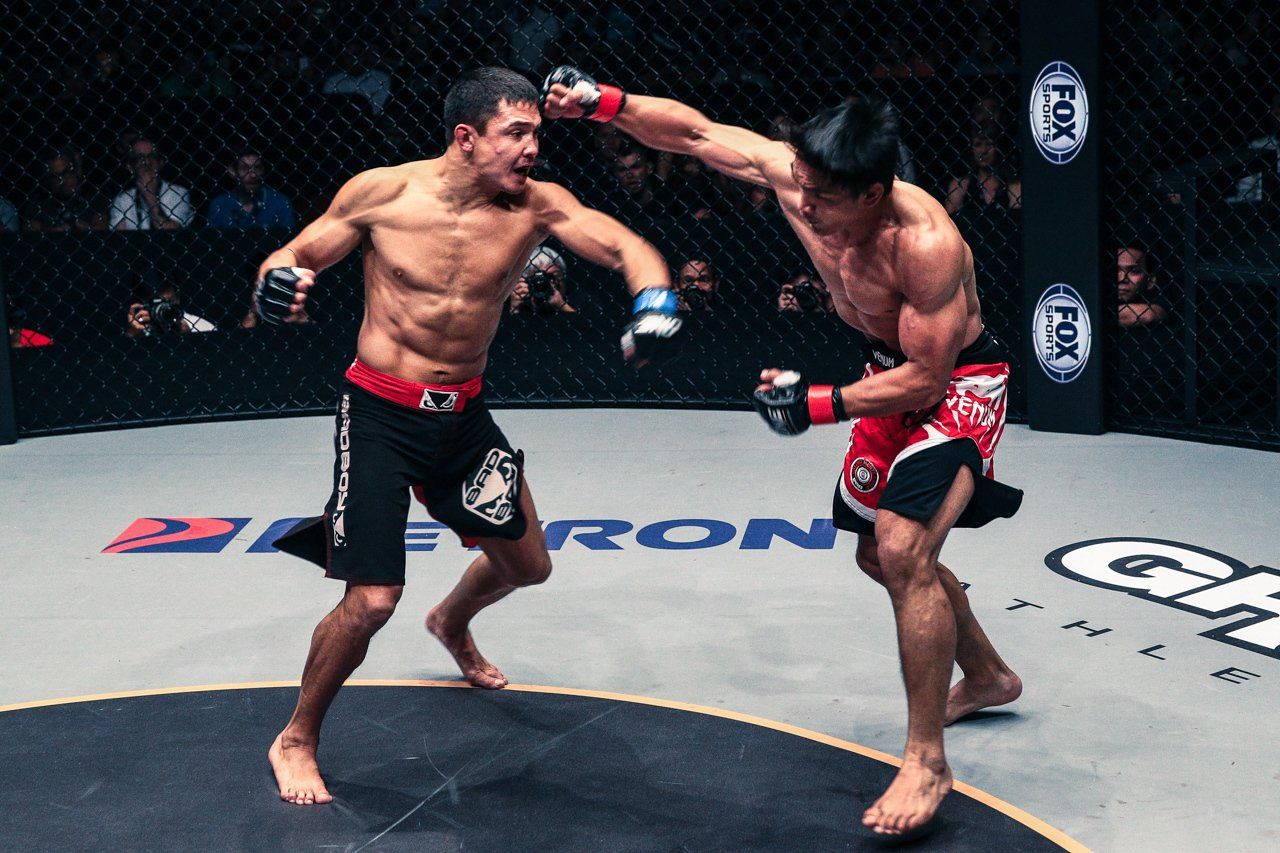 In a battle between knockout artist Timofey Nastyukhin and former ONE Lightweight World Championship title challenger Koji Ando, fans can expect an explosive battle. The winner will earn the right to progress in a division that is incredibly deep and teeming with talent.

Nastyukhin made a name for himself with his high-octane style, bursting onto the scene in 2014 by scoring an emphatic flying knee knockout over now-reigning champion Eduard Folayang. Since then, the Russian stalwart has ousted a handful of big names, including Yusuke Kawanago and Rob Lisita.

An injury he suffered mid-fight against Kotetsu Boku last November, however, forced him out of the contest and into rehabilitation. Now that he is fully recovered, Nastyukhin is set to bring his dynamite fists back to the center of the cage. 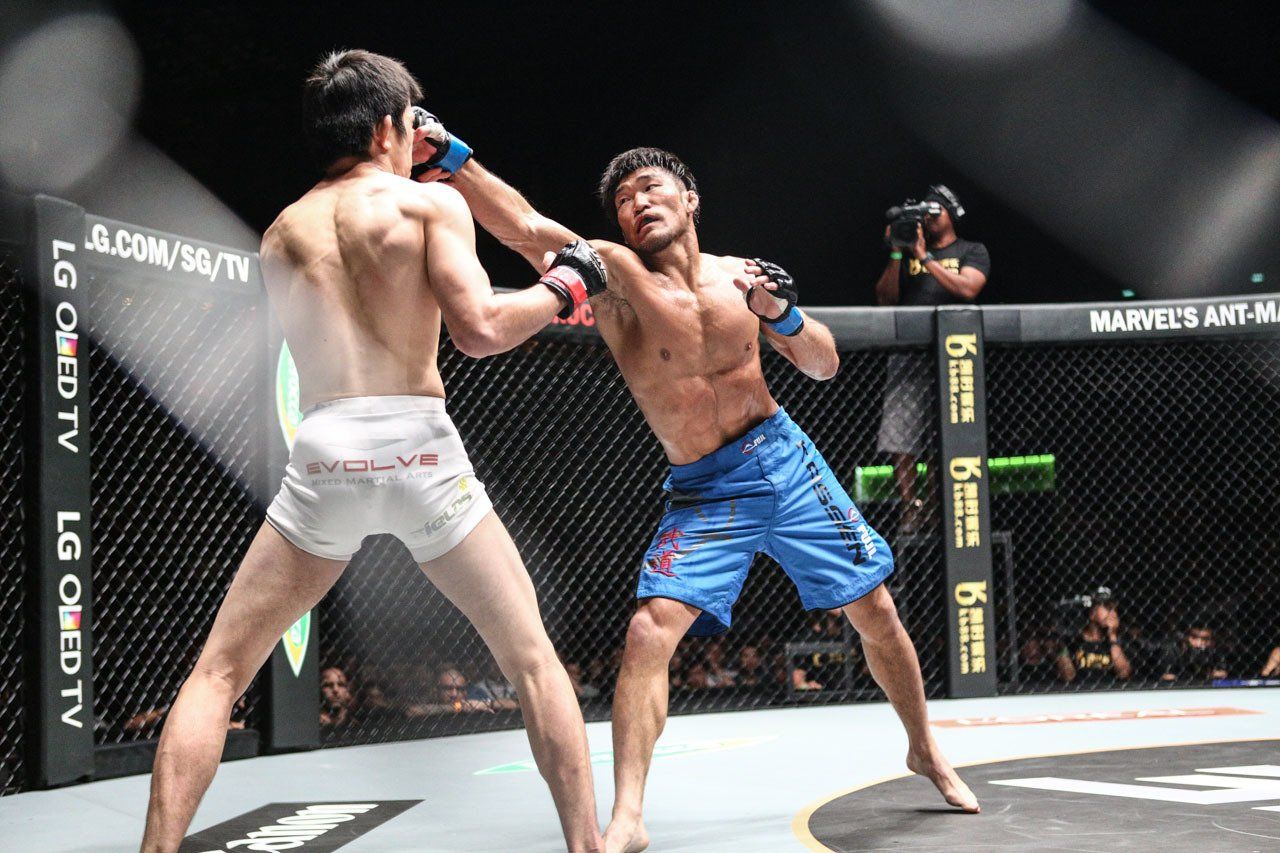 That being said, Nastyukhin’s Japanese foe Ando is a worthy opponent, and probably the best equipped to handle the Russan’s firepower. Ando is no stranger to heavy-handed fighters, having defeated veteran Roger Huerta in 2015, and surviving a three-round war with the hulking Lowen Tynanes. Impressively, Ando even owns a victory over the monster that is former ONE Featherweight World Champion Narantungalag Jadambaa in 2013.

If there is any fighter who would be best prepared to stand up to Nastyukhin’s devastating attack, it’s Ando. The winner of this bout will inch closer to a title shot against the division’s Filipino king, Folayang. 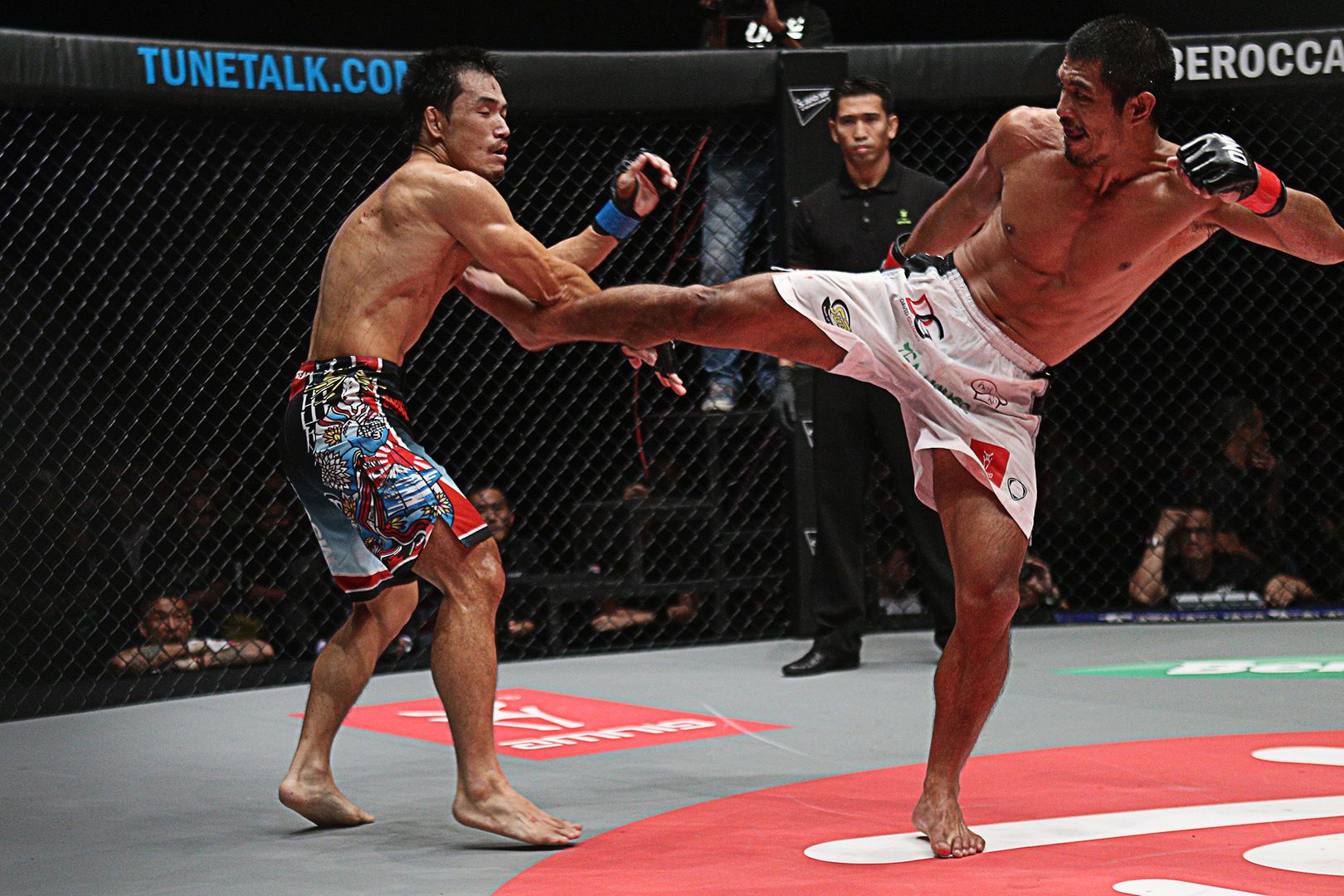 Veteran competitors Eric “The Natural” Kelly and Kotetsu “No Face” Boku are set to determine who among them deserves to be back in the spotlight. Both are highly-experienced combatants who have once been at the very top of their games.

Kelly, once considered one of the promotion’s top featherweights, has lost his last two outings – a submission defeat to Ev Ting back in January of 2016, and a 44-second knockout loss to former ONE Featherweight World Champion Narantungalag Jadambaa months later. However, he remains incredibly talented, and highly-regarded as one of the top homegrown talents to come out of the Philippines. 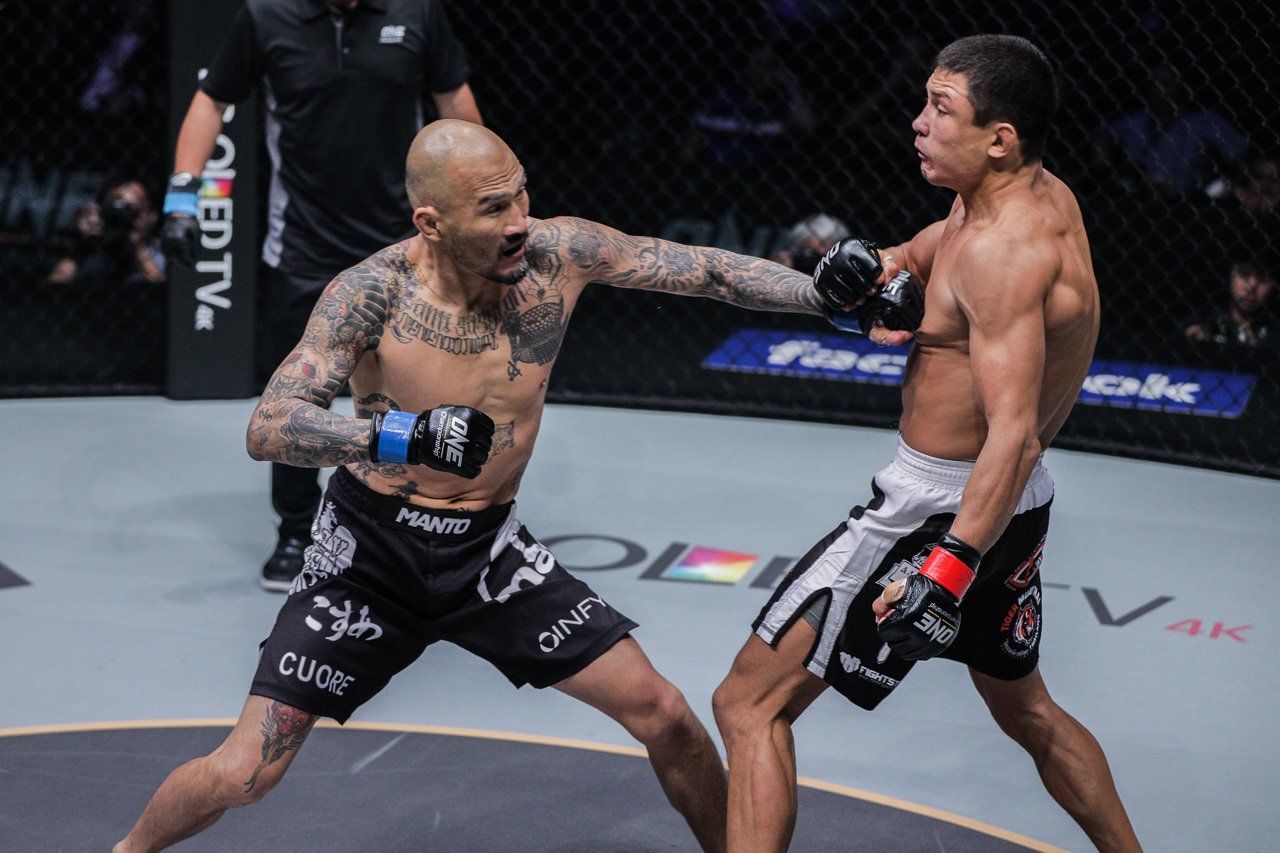 On the other side of the spectrum sits Boku, a veteran of over 30 professional bouts, and the former ONE Lightweight World Champion. Boku has seen the best of them inside the cage. The Japanese veteran has faced nearly every big name in the division, and once managed to emerge as the best in the world at lightweight.

However, losses to Shinya Aoki and Folayang prompted a move to featherweight, which has paid off so far with four wins in five bouts.

It will be a battle back to the top for these two fine warriors, one that will see the victor move on to bigger and better challenges. They must first, however, deal with each other the only way they know how, right at the center of the ONE Championship cage. 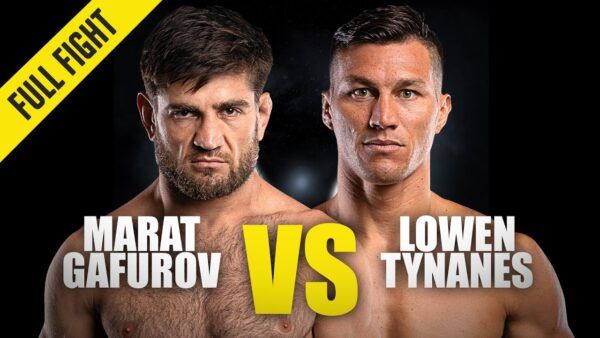