Most of the men and women who will compete at ONE: AGE OF DRAGONS have won most of their ONE Championship bouts by stoppage, but many have shown they can go to battle until the final bell if they need to.

Sometimes the world’s largest martial arts organization offers opponents that are tough nuts to crack, so the best competitors can find a way to outfox them and take victory via the judges’ scorecards through a combination of damage, control, and guile.

These are some of the best examples of heroes who will compete this Saturday, 16 November in Beijing, China, pulling out a top-class performance to get their hand raised.

The Dutch-Moroccan kept a tight guard as he moved into range and ripped hooks and uppercuts at his opponent. The Brazilian fired back, but he was caught clean on the chin and knocked down inside 40 seconds.

Silva was at his most dangerous when he got back to his feet and unleashed heavy strikes in survival mode, but Khbabez waded through the oncoming offense to continue his onslaught until the end of the round.

That relentless attack continued for another two rounds, and the Arj Trainingen representative barely took a backward step as he ensured his fists maintained a close relationship with “Braddock’s” head and body as he took a unanimous decision.

The victory booked “The Tank” into the inaugural ONE Light Heavyweight World Title bout against Roman Kryklia in the co-main event at ONE: AGE OF DRAGONS.

The debut of “The Boxing Computer” Yodsanklai IWE Fairtex in ONE Super Series last May at ONE: UNSTOPPABLE DREAMS was never likely to bring anything but fireworks to the Circle.

Sure enough, the Thai hero started firing his trademark left kick to the body of Chris “The African Warrior” Ngimbi seconds after the first bell, and barely stopped for all nine minutes of this kickboxing bout. When he did, it was generally to test out the 4-ounce gloves he was wearing for the first time, which he used to great effect.

Almost every punch seemed to be thrown with full power, and in the second stanza, Yodsanklai’s unrelenting approach caused the referee to step in for a standing eight-count.

Somehow, Ngimbi got a second wind in the final round, but he continued to eat a steady diet of strikes at full force to come out on the wrong end of a clear unanimous decision.

Yodsanklai will chase his fourth win in The Home Of Martial Arts against Russia’s Jamal “Kherow” Yusupov this Saturday.

#3 Miao Shuts Down The Striker

Miao Li Tao showed his explosive power to win his first two bouts on the global stage, but in his third, he showed the kind of nous that makes him a candidate to be a future ONE Strawweight World Champion.

The Chinese rising star has shown how he can knock out Muay Thai specialists, but against Pongsiri “The Smiling Assassin” Mitsatit in August, he leaned on his grappling to throw his rival around the ring and threaten with multiple submission attempts.

Every time the young Thai athlete escaped his clutches, he soon went for a ride, and he struggled to lay a glove on the My MMA Academy representative for three rounds. He was, however, marked up with plenty of Miao’s ground and pound.

After three rounds, the judges’ decision was a formality, and it gave the man from Beijing his third win in a row. He will try to make it four against Jeremy “The Jaguar” Miado in his hometown.

Yusup “Maestro” Saadulaev used to idolize Masakazu “Ashikan Judan” Imanari as a young martial artist, so he was overwhelmed with emotion when he defeated his hero at ONE: KINGS OF COURAGE.

Imanari is one of the most revered submission specialists in all of mixed martial arts, but his Russian rival had no fear of going into his world and showing his superb ground game.

Though he could not quite lock up a choke early on, or score a TKO with ground and pound in the final period, Saadulaev proved he was the stronger grappler as he swept the scorecards.

It was not all one-way traffic, but even when the Japanese icon threatened with one of his patented leg locks, “Maestro” kept his composure and escaped to re-establish control.

The 34-year-old bantamweight contender will be back in Beijing against Daichi Takenaka as he continues to hunt for a shot at the gold.

Read more: How To Watch ONE: AGE OF DRAGONS – Ennahachi Vs. Wenfeng 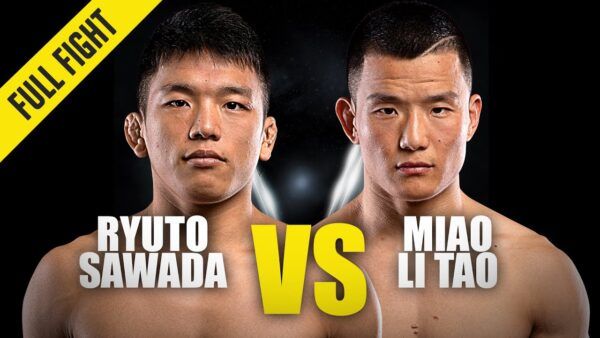