Knees are one of the most punishing tools in a striker’s arsenal. When they land, the results are often devastating.

The hard surface area paired with a strong thrust of the hips makes them incredibly efficient — particularly when they are thrown to the body, where the posterior chain can deliver the most power.

Though many stand-up martial arts make use of knee strikes, they are a hallmark of Muay Thai, and practitioners of “the art of eight limbs” have had the most success with them on the global stage.

Here are five of the best knee-to-the-body knockouts in ONE Championship history.

Pongsiri “The Smiling Assassin” Mitsatit thrilled the crowds in Bangkok, Thailand with his demolition of Robin “The Ilonggo” Catalan at ONE: WARRIORS OF LIGHT in May 2019.

The Filipino threatened with his ground game early, but Mitsatit survived and then took control on the feet. The Thai striker hit Catalan with some hard knees, which forced him to close the distance again. This time, however, “The Smiling Assasin” was prepared.

Mitsatit stayed upright against the Circle Wall, and then he caught “The Ilonggo” in an over-under clinch. He swung a right knee to his rival’s thigh and then drove a huge left knee through the middle, which crumpled Catalan to the canvas.

Dejdamrong’s Knee To The Liver

He was still in the early days of his transition to mixed martial arts, but Dejdamrong Sor Amnuaysirichoke produced an impressive performance against Rene “The Challenger” Catalan at ONE: WARRIOR’S WAY in December 2014.

“The Challenger” worked to take away the three-time Lumpinee Stadium Muay Thai World Champion’s obvious stand-up advantages with an early takedown, which delighted the home crowd in Manila, Philippines. But Dejdamrong scrambled back to his feet and went on the offensive.

Catalan opted to stay in close to work for a takedown, but the Thai star was extremely comfortable in the clinching range. He pushed his foe to the Circle Wall and hit him with a barrage of elbows and knees.

The Filipino tried to turn away to get out of the firing line, but as he did, Dejdamrong timed an inch-perfect left knee to the liver, which instantly incapacitated his rival.

???? POWERFUL ???? Petchmorakot overwhelms Charlie Peters and knocks him out in the second round!

In November 2019, Thai sensation Petchmorakot Petchyindee Academy earned his chance to compete for the inaugural ONE Featherweight Muay Thai World Championship when he stopped Charlie “Boy” Peters at ONE: EDGE OF GREATNESS.

Petchmorakot is known for his effective Muay Khao style, which makes the most of his long frame and punishing knees, and he showcased it perfectly against the Englishman in Singapore.

The Petchyindee Academy representative first sent his adversary to the mat in round two with a left elbow, which was followed by a left knee to the body.

Peters got back to his feet, but he was not fully recovered. The Thai chased him down, jabbed his way into range, and then launched a final left knee to the body that dropped the Brit again. This time, he could not make the count.

Yodpanomrung Jitmuangnon revealed exactly why his nickname is “The Lightning Knee” when he dispatched Tyler Hardcastle at ONE: FOR HONOR in Jakarta, Indonesia back in May 2019.

The WPMF Muay Thai World Champion worked at longer range in the opening stanza, but then he moved into more familiar territory in rounds two and three as he dominated his Aussie rival in the clinch.

With Hardcastle backed up against the ropes in the third frame, Yodpanomrung saw his opening.

The Thai jabbed his foe, which forced the Australian to bring his hands up, and then stepped in with a crunching right knee to the gut, which dropped Hardcastle in his own footprint and ended the bout.

Adi Paryanto gets ONE: DAWN OF VALOR rolling with a swift TKO victory over Angelo Bimoadji!

Adi Paryanto gets ONE: DAWN OF VALOR rolling with a swift TKO victory over Angelo Bimoadji!????: How to watch ???? bit.ly/ONEDAWNVALOR????: Book your hotel ???? hotelplanner.com????: Watch on the ONE Super App ???? bit.ly/ONESuperApp????: Shop Official Merchandise ???? bit.ly/ONECShop

The only non-Thai athlete to make the list is “Zenwalk” Adi Paryanto, who picked up his first win on the global stage against his Indonesian countryman Angelo “The Unicorn King” Bimoadji at ONE: DAWN OF VALOR in October 2019.

Paryanto, a sanda stylist, pressured his opponent from the very beginning and countered his compatriot’s takedown attempts with hard strikes in the clinch.

“Zenwalk” pushed Bimoadji back to the Circle Wall, and then he let rip with a diagonal right knee. The strike collided with his foe’s ribs and dropped him to the mat. A final left knee sealed the deal for Paryanto after just 64 seconds. 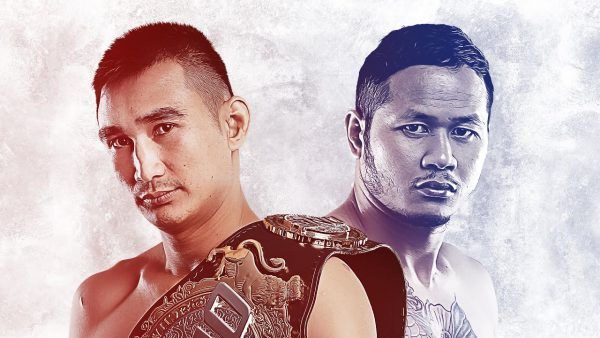