ONE Championship has never failed to create special moments in Myanmar.

When the world’s largest martial arts promotion returns to the Thuwunna Indoor Stadium on Friday, 29 June, with ONE: SPIRIT OF A WARRIOR, you can expect even more unforgettable action from the best martial artists on the planet. 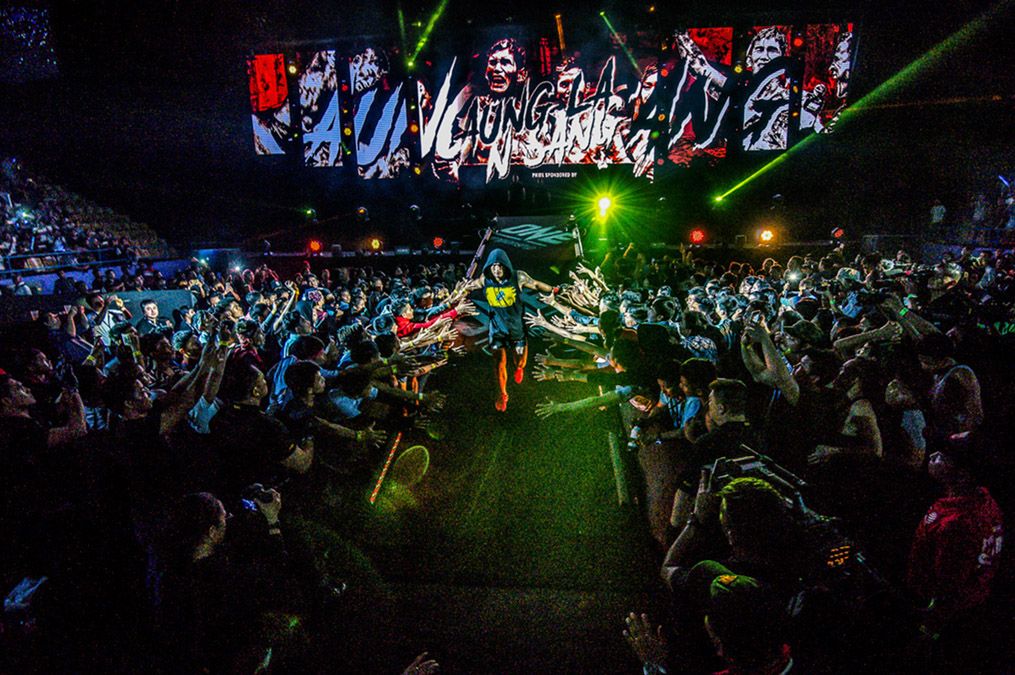 Since ONE held its first show in Yangon back in July 2015, there have been classic World Title bouts, exciting tournaments featuring homegrown athletes, and incredible finishes that will be on highlight reels for years to come.

Of course, no one gets more of a reaction from the fans than their national hero and two-division ONE World Champion, Aung La “The Burmese Python” N Sang.

He has done extraordinary things in three consecutive main events in his home country, and this time, he returns to defend his ONE Middleweight World Title against Japan’s Ken Hasegawa.

However, he has not been alone in delivering great performances. As our heroes prepare to storm back into the Thuwunna Indoor Stadium to showcase their skills, here are five of the best highlights from ONE’s previous blockbuster events in Myanmar.

A historic bout that won Myanmar its first world title.

Posted by ONE Championship on Monday, January 29, 2018

It was a rematch from their main-event clash five months earlier, but this time, Aung La N Sang had a full eight-week training camp, and he was competing for the World Title in front of his countrymen.

Myanmar’s favorite son put on an awe-inspiring performance. He knocked down – and nearly finished – the durable Russian early in the first round.

From then on, it was a seesaw battle, with Bigdash scoring takedowns, but “The Burmese Python” heroically defending on the mat and regaining dominance when he was able to strike again. 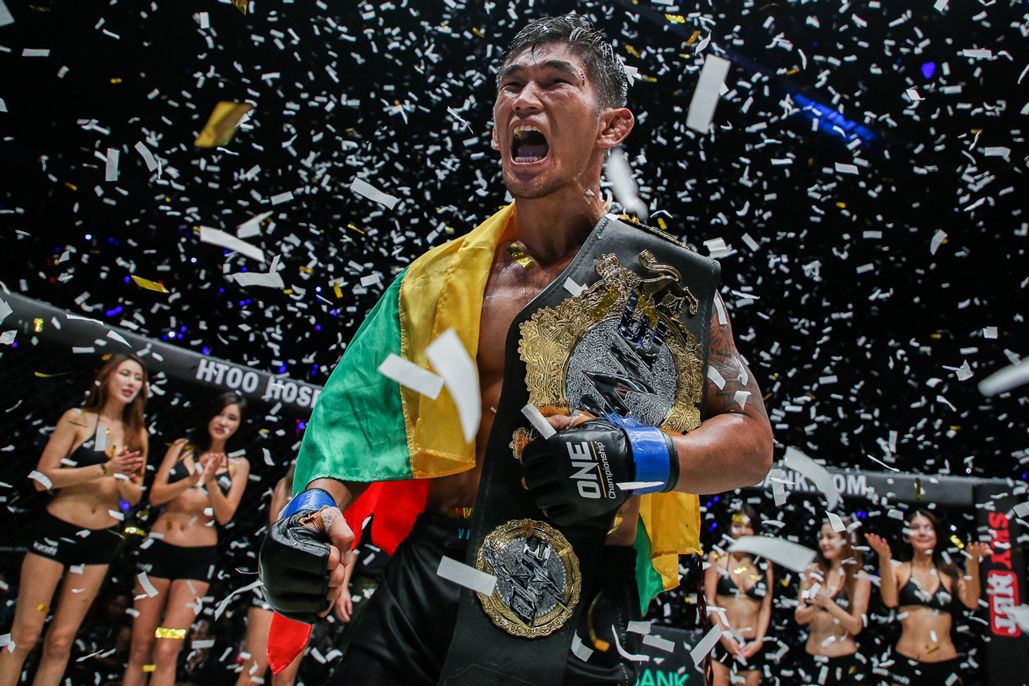 After five rounds, the judges rendered a unanimous decision for Aung La N Sang. With the win, he captured the ONE Middleweight World Title – and became Myanmar’s first world champion in their sporting history.

He also gave an inspiring speech to his compatriots, crediting their support for helping him to make history.

“I’m not talented. I’m not good. I’m not fast. But with you [Myanmar], I have courage, I have strength, I have what I need to win the world title!” he said.

After submitting Alain Ngalani in the promotion’s first-ever Open Weight Super-Bout in November, he moved up a division to challenge Alexander “Bebezão” Machado for the vacant ONE Light Heavyweight World Championship at ONE: QUEST FOR GOLD in February.

“The Burmese Python” was able to match his increase in size with an increase in power, and scored the most spectacular finish of his career.

Once “The Burmese Python” found his range, he struck. He unleashed a powerful head kick that crashed through Machado’s guard and put the Brazilian on the canvas. A follow-up flurry of punches prompted the referee to wave off the bout.

In a record-setting 56 seconds, Aung La N Sang added the ONE Light Heavyweight World Title to his collection.

A beautiful transition, another outstanding performance.

Yusup “Maestro” Saadulaev has experienced many marquee moments in his 10-year career, but his most outstanding victory happened at ONE: UNION OF WARRIORS in October 2016.

The Russian submission wizard clashed with Australia’s Jordan “Showtime” Lucas, and he was motivated to continue building momentum towards a ONE Bantamweight World Title shot.

Although Lucas was widely perceived to have the stand-up advantage, it was “Maestro” who scored the near knockout. He dropped the Aussie with a jab-cross midway through the opening stanza.

Saadulaev immediately pounced on his rival, and put his Brazilian jiu-jitsu black belt expertise to work. He kept advancing his position, put Lucas in dangerous situations, then brilliantly displayed his creativity.

“Maestro” wrapped his arms around the Australian’s neck as he was scrambling, used the cage to jump over his rival’s body, and got behind him. He maintained his tight grip and leaned forward to lock in a modified rear-naked choke. Lucas had no choice but to tap.

It was voted as the second-best submission of 2016.

Bozhena Antoniyar kicks off a blockbuster night in Yangon with a ⚡quick 24 second TKO over Shwe Sin!

Bozhena Antoniyar kicks off a blockbuster night in Yangon with a ⚡ quick 24-second TKO over Shwe Sin!TV: Check local listings for global broadcast

Two-time Myanmar National Boxing Champion Bozhena Antoniyar made an unforgettable debut in ONE.

In February, at ONE: QUEST FOR GOLD, the 22-year-old Yangon native squared off against National Lethwei Champion and fellow debutante, Shwe Sin.

The boxer proved her dominance in an instant. Seconds after the opening bell rang, Bozhena Antoniyar took her rival down, unloaded ground strikes, and then slid into full mount.

The Yangon atomweight proceeded to rain down more rapid-fire punches, which caused the referee to jump in and save Shwe Sin from any further damage after just 24 seconds.

Bozhena Antoniyar earned the honor of being the first woman from Myanmar to win a ONE bout, and secured the fastest stoppage victory in women’s division history.

While Aung La N Sang is Myanmar’s most popular sports icon, there is another homegrown athlete who is hot on his heels.

Phoe “Bushido” Thaw has emerged as the country’s next martial arts superstar. The 33-year-old is the 2016 ONE Myanmar Featherweight Tournament Champion, and has a perfect record of 6-0.

Five of his wins have come via knockout, and the one occasion he was taken the distance was an unforgettable back-and-forth battle with Saw Ba Oo that proved he was more than just a powerful striker.

However, no performance provided greater confirmation of his superstar credentials than his magnificent front-kick knockout of Sor Sey in the co-main event of ONE: QUEST FOR GOLD.

After a toe-to-toe exchange with the Cambodian, Phoe Thaw put his opponent on his heels with a stiff jab. Sey was stunned with his hands down, opening him up for a blow to close the show.

A punch could have done the job, but “Bushido” had an eye for the spectacular. He surged forward, and thrust an incredibly powerful front push kick into his opponent’s face to end the encounter in an instant.

Expect to see the lethwei stylist showcase his talents on another event in Myanmar card later this year.