The last three months have seen some of the most remarkable ONE Championship performances in recent memory.

Fighters go to lengths to delight fans with highlight-reel stoppages and wow them with spectacular action, and ONE Championship athletes are a talented bunch in this regard. In the last quarter alone, there have been plenty of movers and shakers.

Let’s take a closer look at five of the best knockouts in ONE Championship in the past quarter.

Leandro Ataides has had a rough past few years in his mixed martial arts career.

Entering the ONE Championship cage against Egyptian foe Mohamed “Flex” Ali at ONE: AGE OF DOMINATION, Ataides was on a terrible three-fight losing streak, having taken on a series of tough opposition the likes of Igor Svirid, Aleksei Butorin, and Marcin Prachnio. The once proud warrior was in desperate need of a victory, and it could not have come at a better time.

Ali was a big puncher, making Ataides’ best bet for victory to take him to the ground. The 30-year-old Ataides is a five-time Brazilian jiu-jitsu world champion, and not many fighters would be able to survive a ground battle with him if they were to hit the mat.

In this case, it wasn’t Ataides’ grappling mastery that shone through, but his epic knockout power.

After an exciting first round of back-and-forth action, Ataides turned up the aggression late into the second, stalking Ali up against the cage fence. In a smooth, swift motion, Ataides flew three feet into the air, planting his knee squarely on Ali’s jaw.

That was all she wrote for the proud Egyptian. That flying knee was picture perfect. There was no way Ali was getting up from that. 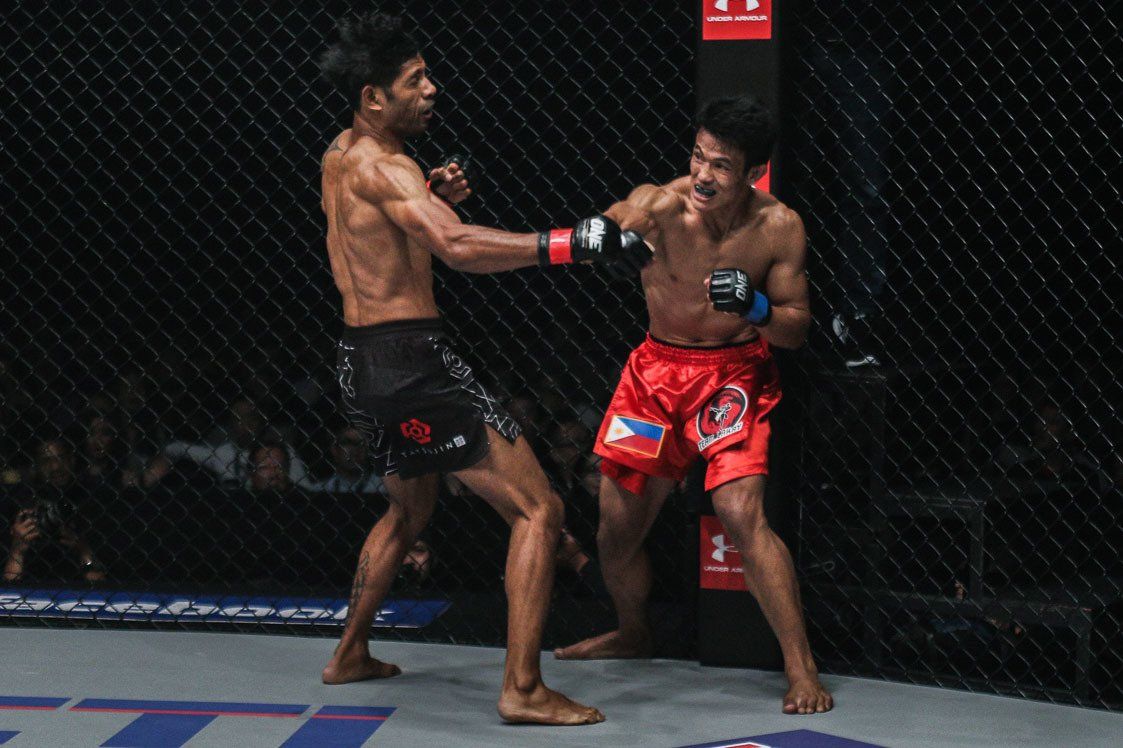 Something has changed in Edward Kelly. All of a sudden, the looks he has showed inside the ONE Championship cage are that of a seasoned veteran. He is not making the same mistakes anymore that he did in previous losses to Martin Nguyen and Ev Ting. The improvement in all aspects is astounding.

Presently, Kelly is riding a three-fight win streak, having just trounced Indonesian fight veteran Sunoto at ONE: AGE OF DOMINATION. He has won his last three bouts by scintillating stoppage, but one win stands out above the rest.

At ONE: TITLES & TITANS, Kelly electrified the crowd with a stunning knockout victory over home crowd favorite Vincent Latoel.

Latoel stalked Kelly tirelessly across the cage for the majority of the first round. The Indonesian fighter’s confidence was sky high, having had a wealth of fight experience on his side. Yet although Kelly owned far less experience than his opponent, he was certainly not lacking in talent.

Kelly’s zippy strikes and comprehensive grappling game showed flashes of elite-level skill. He has evolved into a mix of his older brother Eric Kelly’s grappling chops and the silky smooth wushu of Team Lakay senior Eduard Folayang. That says a lot about Kelly’s potential.

Moments into the second round, Kelly had enough of Latoel’s constant stalking. From up against the cage fence, Kelly uncorked a powerful right hook that turned the lights out on his hapless foe, earning one of the most exciting finishes thus far in his career.

Kelly is really starting to come into his own, and in some ways, beginning to surpass his older brother Eric as the Philippines’ best featherweight. 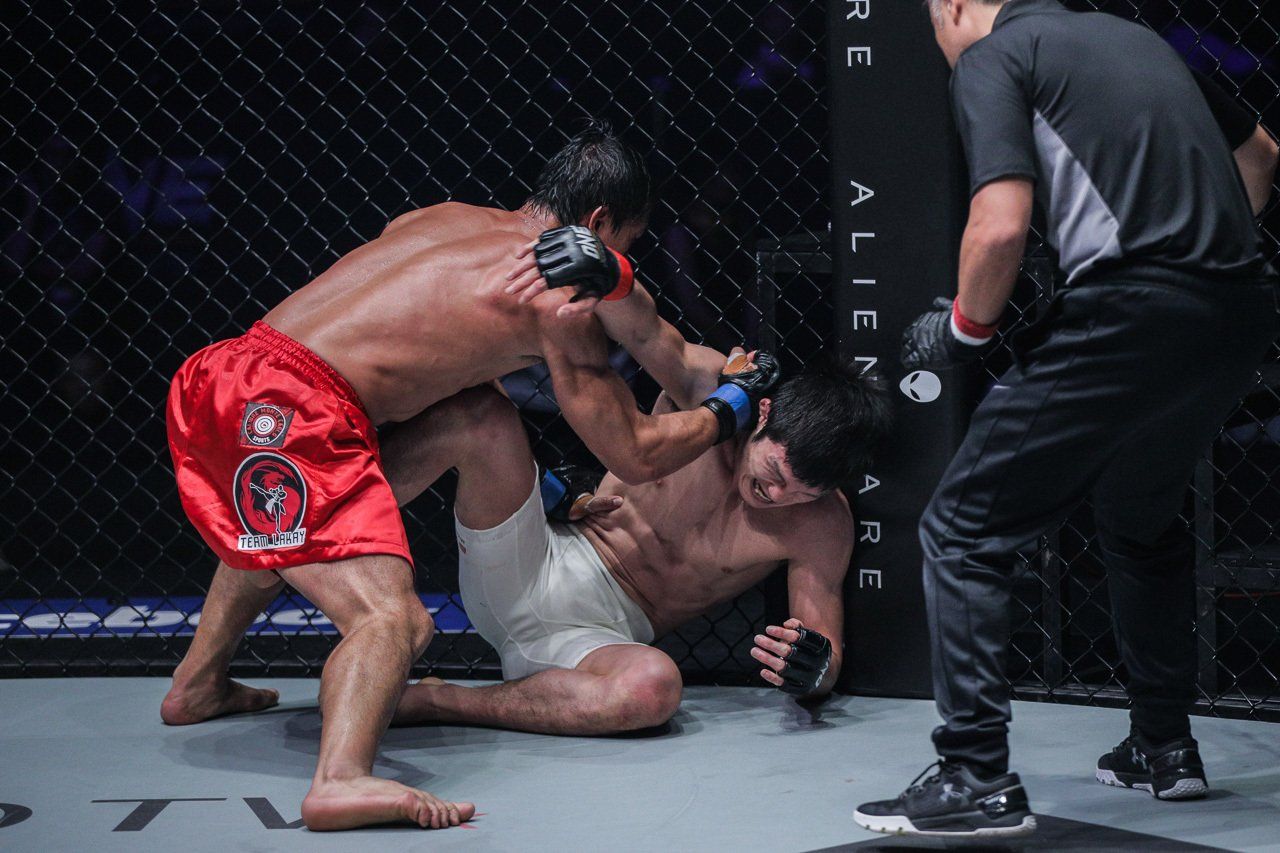 Folayang withstood Aoki’s vaunted grappling, which was on full showcase in the first round, and did just enough to last until he was able to shake off the jitters.

Aoki took Folayang down early and quite easily in the first, which was always going to be a scare. Aoki’s submissions are truly terrifying, and not many can withstand his ability to finish on the ground. Folayang, however, found a way to survive.

Back up on the feet, Folayang began to put his world-class wushu skills on display, sending the crowd to the edge of their seats with a spectacular round two comeback, capped off by a scintillating third-round finish.

Did anyone honestly see that coming? Aoki, who hadn’t lost in five years and was riding a nine-fight winning streak heading into the matchup, was expected to be met with some resistance from a live challenger. But no one would dare bet on him losing.

Yet the signs were there. Folayang’s striking is the best it has ever been, as evidenced in wins over Tetsuya Yamada and Adrian Pang. Since his training stint in the United States, Folayang’s wrestling has also been absolutely on point. Takedown and submission defense are spot on.

All these skills were exactly what was needed to dethrone a legend and Eduard Folayang showed up.

As a result, Folayang figured in one of the most exciting finishes in Philippine MMA history. The end sequence came when a flying knee landed right as Aoki was shooting in for a takedown. A volley of follow up punches up against the fence spelled the beginning of the end.

Referee Yuji Shimada gave Aoki every chance he needed to try and fight his way out of his predicament, but was left with no choice but to wave the bout off after it became obvious that Aoki was done. 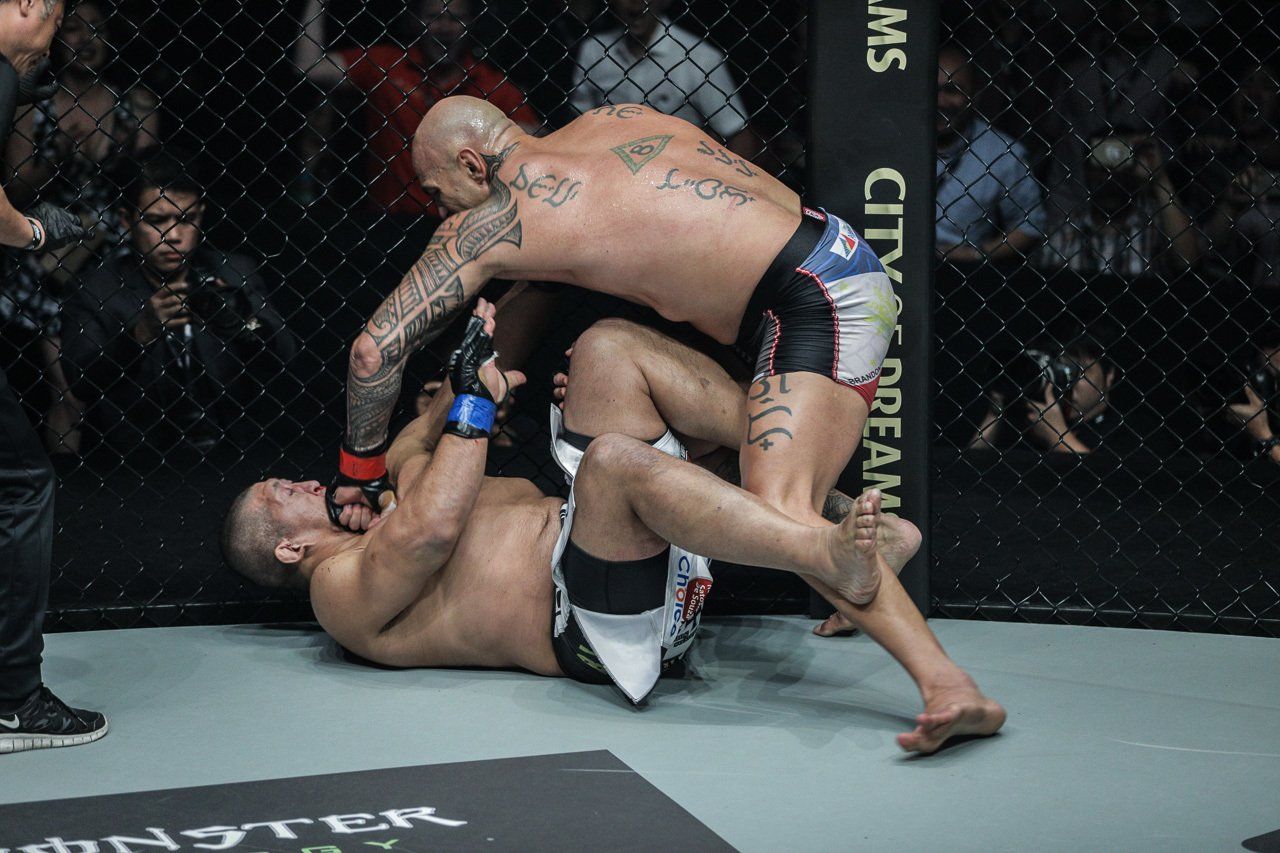 Brandon Vera’s TKO Of Hideki Sekine At ONE: AGE OF DOMINATION, Manila, 2 December

Brandon “The Truth” Vera has hit his second wind as a professional mixed martial artist. The San Diego, California resident has never looked any better, and that it is a great thing for Asian fight fans.

Vera moved to Manila earlier this year to get closer to his fans and rediscover his Filipino roots. When he signed with ONE Championship, many were already predicting he would become the promotion’s heavyweight champion.

Last year, Vera realized that potential when he stopped Taiwanese-Canadian fighter Paul “Typhoon” Cheng in one round to become the inaugural ONE Heavyweight World Champion.

In Vera’s first title defense at ONE: AGE OF DOMINATION, the Filipino-American phenom took on enormous Japanese challenger, the previously unbeaten Hideki Sekine, in a concise affair.

Vera needed just a little over half of the first round to dispatch his foe, winning by technical knockout.

While Sekine, a judo and Brazilian jiu-jitsu practitioner, constantly posed the threat of takedowns, Vera operated from the outside with his vaunted Muay Thai. Vera blasted Sekine with blistering head kicks and heavy knees.

Surprisingly, Sekine took the shots quite well, proving to everyone in attendance that his chin is truly world-class. However, no mortal can survive being hit by Vera too many times, and Sekine eventually fell just like every other man would in that situation.

The end came when a thunderous kick to Sekine’s midsection caused the Japanese fighter to crumple in pain. Vera pounced on him immediately with a series of hard punches from the top, sending the packed Mall of Asia Arena crowd into a frenzy. 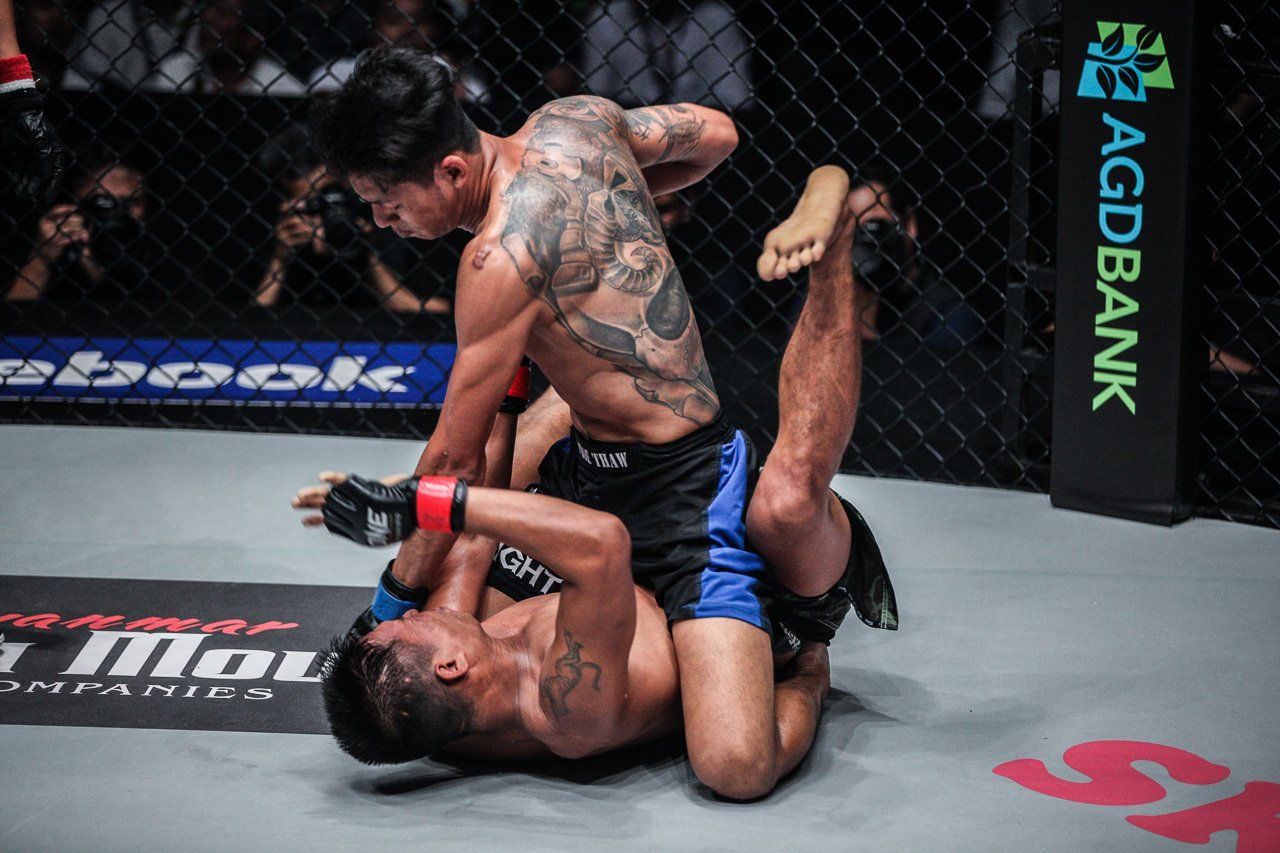 Myanmarese featherweight prospect Phoe Thaw is enjoying his days as a professional mixed martial artist. Due to the rise of Asian MMA, made possible by the tireless efforts of the Asian MMA community in raising the profile of the sport on this side of the world, many new fighters have emerged from the grassroots.

Some with limitless potential — fighters like such as Phoe Thaw. He made his MMA debut last year, defeating the bullish Kyal Sin Htoo by technical knockout in the first round at home in Myanmar. He followed that victory up with another spectacular first round finish, stopping Saw L Lay to the delight of his hometown fans.

This past October, Phoe Thaw competed in the Myanmar Featherweight Tournament, finishing Kat Pali with a symphony of punches and elbows in the semifinal. In the final bout, the Yangon native turned in another impressive performance, trumping Saw Yan Paing again via first-round TKO.

Phoe Thaw used his superior size and length advantage to perfection, overwhelming Saw Yan Paing just a little over three minutes into the bout by gaining full mount and firing away from the top. Thaw unleashed a stream of punches and elbows from mount that left his opponent gasping for breathing room.

It was Phoe Thaw’s fourth straight victory. Since making his professional MMA debut, he has won all his bouts via first-round stoppage.