Stamp Fairtex was pushed all the way for five rounds the last time she faced Janet “JT” Todd in one of the most fiercely contested ONE Super Series bouts of 2019, and she is ready to do it all again.

Last February, the Thai superstar won the ONE Atomweight Muay Thai World Title when she went to war with her American rival, but this time the rules will be different as Stamp will put her ONE Atomweight Kickboxing World Championship on the line on Friday, 28 February at ONE: KING OF THE JUNGLE.

The venue will be the same – the Singapore Indoor Stadium – but the only other similarity the 22-year-old from Pattaya believes this rematch will have to the first bout is that she will have a stiff test on her hands.

“Rematching Janet under kickboxing rules is going to be completely different,” she says.

“I think we’re both just going to have to wait and see who can throw the better combos, and whose shots are cleaner and more damaging.”

It has been a busy year for Stamp since the last time she faced Todd, as a trio of mixed martial arts bouts followed the first defense of her Muay Thai gold.

“JT” stayed entrenched in the striking arts and looked better and better as she racked up three wins against Wang Chin Long, former ONE World Champion Chuang Kai Ting, and Ekaterina Vandaryeva.

Stamp does not feel like looking back at her last match with Todd will do much good, but she has studied the videos of her other match-ups, and she believes she will have a slight advantage once again.

“I’ve been watching the tapes of her previous matches, and will use that to create my own game plan,” she reveals.

“I think my tactics will be better than hers, but other than that, there isn’t anywhere that I feel I have an advantage. My plan is to use my combos, keep my balance, be defensive, and use my tactics to control the contest.”

The Rayong native has also brought a specialist boxing coach into her training camp to help her switch back to the kickboxing rule set.

With no clinching, elbows, or dumping allowed, Stamp is focused on sharpening one of the skills she will have to make the most of, and that could be key. Her hands were particularly effective the first time she met Todd, so if she can sharpen them, she may take the upper hand.

“I’m going to have to punch a lot! Because I only defend this belt once a year, I need to practice boxing as much as I can. I’m just really focused on doing as much boxing as possible,” the Fairtex representative explains.

As well as looking back at her upcoming opponent’s performances, Stamp has followed Todd on Instagram and is impressed by the 34-year-old’s training regime.

Though she will have the experience advantage once again, the Thai superstar has no doubt she will still have to go hard for five rounds and stay busy enough to win the judges’ favor.

“For Janet, I think her advantage is her physique. She’s very muscular and does a lot of conditioning. I’ve watched on her Instagram and she’s naturally very athletic,” Stamp explains.

“I will win, but I think this fight will go the distance. I don’t think I can knock her out because I wasn’t able to do it before when we were wearing the small gloves in Muay Thai.”

One aspect of this World Championship bout that is a little surprising is that it comes just a few weeks after Stamp’s last match. However, because she finished Puja “The Cyclone” Tomar in less than a round at ONE: A NEW TOMORROW, she is happy to jump right back into the swing of things and is sure she will be ready.

The 24-year-old is always training, and though the significance of the moment is not lost on the young Thai, she is excited to continue her historic reign as the undisputed queen of ONE Super Series. 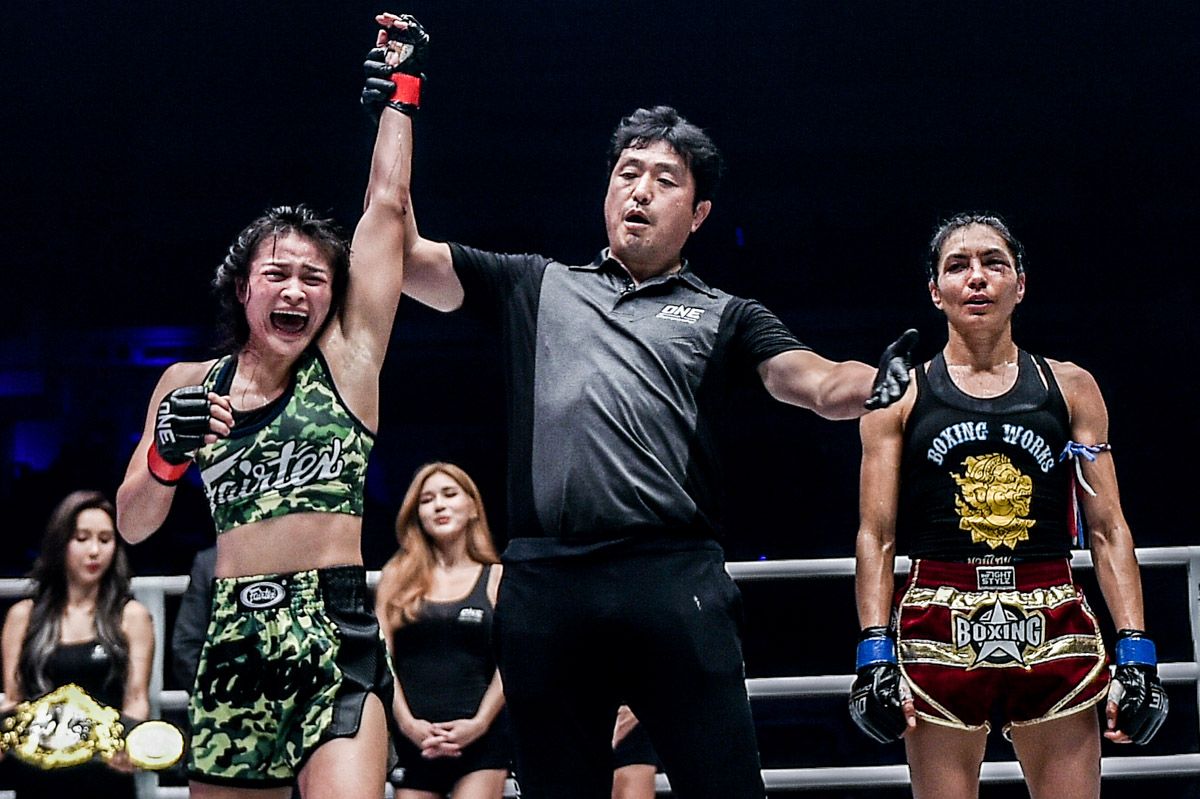 “It was enough time to rest. Training is normal for me. I just train and sleep, that’s pretty much it. Right now I’d say I’m about 75 percent,” she says.

“This is a very important fight for me. As the champion, I must defend my belt! I am the first and only woman to be a two-sport World Champion.

“I want to ask all the Thai people to be there to cheer me on! I will not only bring my best, but make sure that this belt returns to Thailand, and stays here for as long as possible.”