Anne “Ninja” Line Hogstad is a leading name in the female Muay Thai ranks, and she could be next in line to challenge ONE Atomweight Muay Thai World Champion Stamp Fairtex for the gold.

The #2-ranked contender introduced herself to ONE Championship fans with her debut victory over Alma Juniku at ONE: FIRE & FURY this past January, where she turned heads with a stunning performance.

Hogstad’s upbeat personality has also garnered her a new wave of supporters who are keen to see what she can achieve in the world’s largest martial arts organization.

Here are three reasons why the Norwegian will continue to grow her fanbase when the promotion’s calendar of events resumes later this year.

Hogstad’s love for adrenaline-inducing sports should have indicated that she was bred for martial arts success.

Though she started her athletic endeavors in gymnastics, Hogstad also took on her mother’s fearless traits, which include a love for extreme sports.

Norway’s mountainous terrain allowed “Ninja” to sample the likes of white-water rafting and other outdoor pursuits. And when she found martial arts, she realized there was no greater way to get that surge of adrenaline.

Hogstad started her martial arts journey with sport jiu-jitsu and found some success in the semi-contact style.

She later received the chance to join the full-contact world of mixed martial arts on a reality TV show called Norway’s Best Fighter.

“Ninja” quickly jumped on a plane to Thailand and began her training in earnest. However, she realized that she wasn’t quite ready for the step up in competition when she lost her first match to a Muay Thai stylist.

Instead of being deflated, Hogstad gave up sport jiu-jitsu and committed herself to “the art of eight limbs,” where she knew she would be pushed to her limits.

With a newfound respect for the hard-hitting world of Muay Thai, Hogstad focused all of her energy on striking — even moving to her nation’s capital of Oslo to receive the best training.

Before long, she had converted her passion into success. “Ninja” plowed through her local scene – winning national and Scandinavian titles in kickboxing and Muay Thai – and then became a two-time ISKA World Champion.

Those accolades earned her a shot in ONE Super Series, where she now has her eyes on the biggest prize of all.

Finally, take a look at some of the Norwegian’s best action shots in The Home Of Martial Arts! 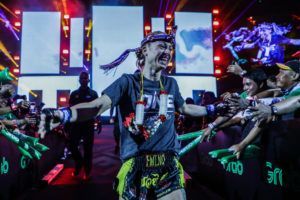 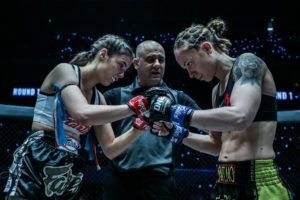 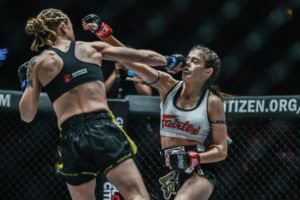 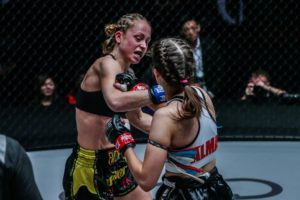 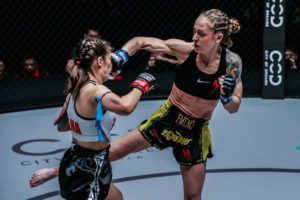 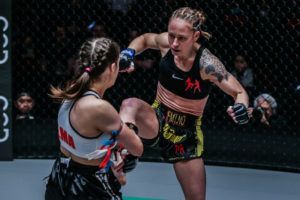 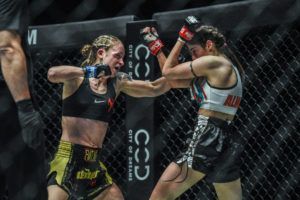 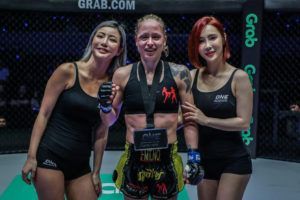