Troy “Pretty Boy” Worthen left everything and everyone he knew behind in the USA to chase his dream, and after a rough start in Singapore, he has found a new home where he can prosper in life and martial arts.

The American athlete – who will return to action in his adopted hometown against Mark “Tyson” Fairtex Abelardo at ONE: KING OF THE JUNGLE this Friday, 28 February – left Lakeland, Florida, last year to join the Evolve team in ”The Lion City.”

Though he was jumping into the unknown, he embraced the big change in his life and now he looks set for a great career in The Home Of Martial Arts.

Asia was not on the agenda for Worthen after he graduated from the University of Central Florida with a degree in Sports and Exercise Science and an NCWA Wrestling Championship.

His plan was to build his mixed martial arts record and work toward the big leagues on his local circuit, but that did not go according to plan.

“I was having a hard time getting consistent fights back in the US,” Worthen begins.

“There were injuries I was dealing with and it was also at that time that I started to get a bunch of job offers in strength and conditioning. There were openings where I could take over programs and open my own gym, and these opportunities were pulling me away from mixed martial arts.”

When an opponent pulled out of one bout, “Pretty Boy” seriously started to consider an alternative career, but then he stumbled upon an advert for Evolve’s global tryouts.

He was interested in applying at first, but despite his success on the mat in college and a perfect start to his career in his new sport, self-doubt almost got the better of him.

“When I first saw it, I thought it was super cool and an awesome opportunity, but I didn’t believe I had a chance,” Worthen admits.

“There’s probably a million people signing up for this, what are the odds that they actually take some American kid to join the Evolve team and compete in ONE Championship?”

Luckily, some cajoling from supportive teammates and friends who had faith in his ability encouraged him to apply.

“I had nothing to lose. If it happens, it happens. I know I love this sport and I will give it the benefit of the doubt to try this out,” he adds.

“I knew if I got selected, I had a chance to prove myself out [in Singapore]. I knew I was one of the best guys in the world, so I only wondered if they would give me that opportunity.”

The Evolve coaches were impressed with Worthen’s résumé, and when they invited him to try out, he aced his assessment and was the first among the group of finalists to get offered a spot on the team. 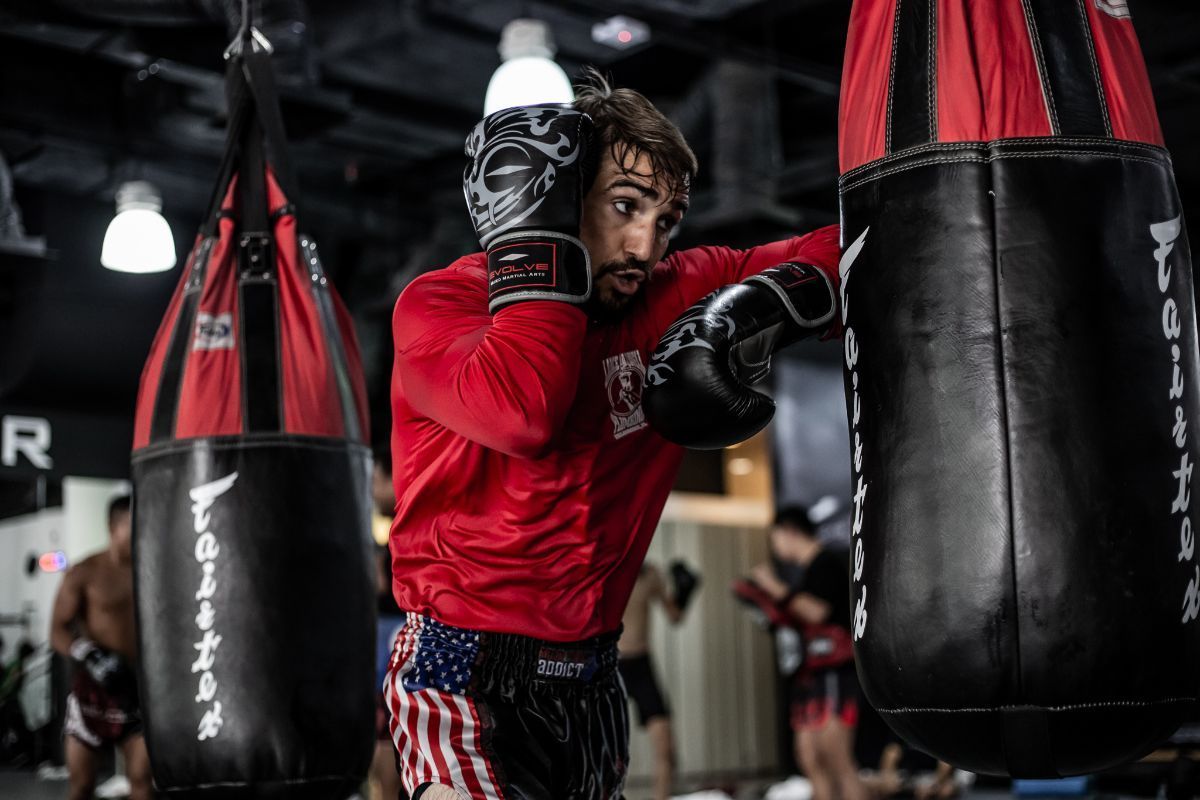 “Pretty Boy” was delighted, but he was also sad to leave behind his family and closest friends, many of whom had been with him every step of the way in the first stages of his career.

That meant his first few weeks on a new continent were an emotional roller coaster. Plus, there were plenty of other challenges to overcome.

“I encountered a lot of roadblocks. Like I couldn’t get a local number because I didn’t have a local address, so I couldn’t use the free wifi,” Worthen says.

“On top of it, I didn’t have money and needed a place to stay, but most landlords wanted two months security deposit. Trying to figure out how to get all the necessities and settle in was the most frustrating part.”

He was also in Singapore without his fiancé, Vero, who he married last August. He credits her for helping him through the process of settling in his new home – particularly when she moved out to live with him.

“She’s a very driven person and she motivates me every single day,” Worthen says.

“I come home and see how much she’s doing to make sure that life is good for us, and it just motivates me to do the best I can to provide for her. She’s made a huge difference. I’m not going home to an empty house and just sitting there on Netflix.

“I have someone to talk to, laugh with and go have new experiences together. I love experiencing Singapore with her. We find a new restaurant or culture, something new to do every week so it’s fun to share those experiences with someone that you care about so much.”

His settling into the Singaporean lifestyle and embrace of the culture has come at the same time as his success in the Circle.

The 26-year-old bantamweight improved his perfect record to 6-0 with two wins in 2019 and he feels like he has continued to improve since then. Because of that, he is excited for his next assignment in ONE, as well as the chance to plant roots in Singapore with his wife.

“We are actually moving into a new home soon. This will be our first official place since we got married. Things are going really well for us in Singapore and I can see us being here for a long time,” he says.

“It’s a game-changer having her here. I’m super happy that she’s made the move and having this crazy journey with me, and I’m looking forward to making it all worth it for her.”

Read more: ‘Tyson’ Abelardo Says His Pressure Will Be Too Much For ‘Pretty Boy’