The most anticipated rematch in women’s martial arts history takes place this Friday, 18 May.

ONE Women’s Atomweight World Champion “Unstoppable” Angela Lee will defend her title against Mei “V.V.” Yamaguchi at ONE: UNSTOPPABLE DREAMS in Singapore.

These athletes first met in May 2016 for the inaugural women’s atomweight world championship, with Lee edging out her Japanese opposition via unanimous decision to claim the belt.

Now, two years later, they meet again. This time, both athletes have promised a finish to win in definitive fashion.

Lee has been training in the martial arts ever since she was a child.

Born into a martial arts family, she studied under her father Ken and mother Jewelz, learning alongside her brother Christian – who challenges for the ONE Featherweight World Championship on Friday.

Together, Angela and Christian and her sibling captured multiple World Pankration Titles before making the transition to mixed martial arts.

The Singaporean made her professional debut with ONE Championship in May 2015 at the age of 18. Within a year, she chalked up five consecutive stoppage victories, and then defeated Yamaguchi to capture the inaugural ONE Women’s Atomweight World Championship. 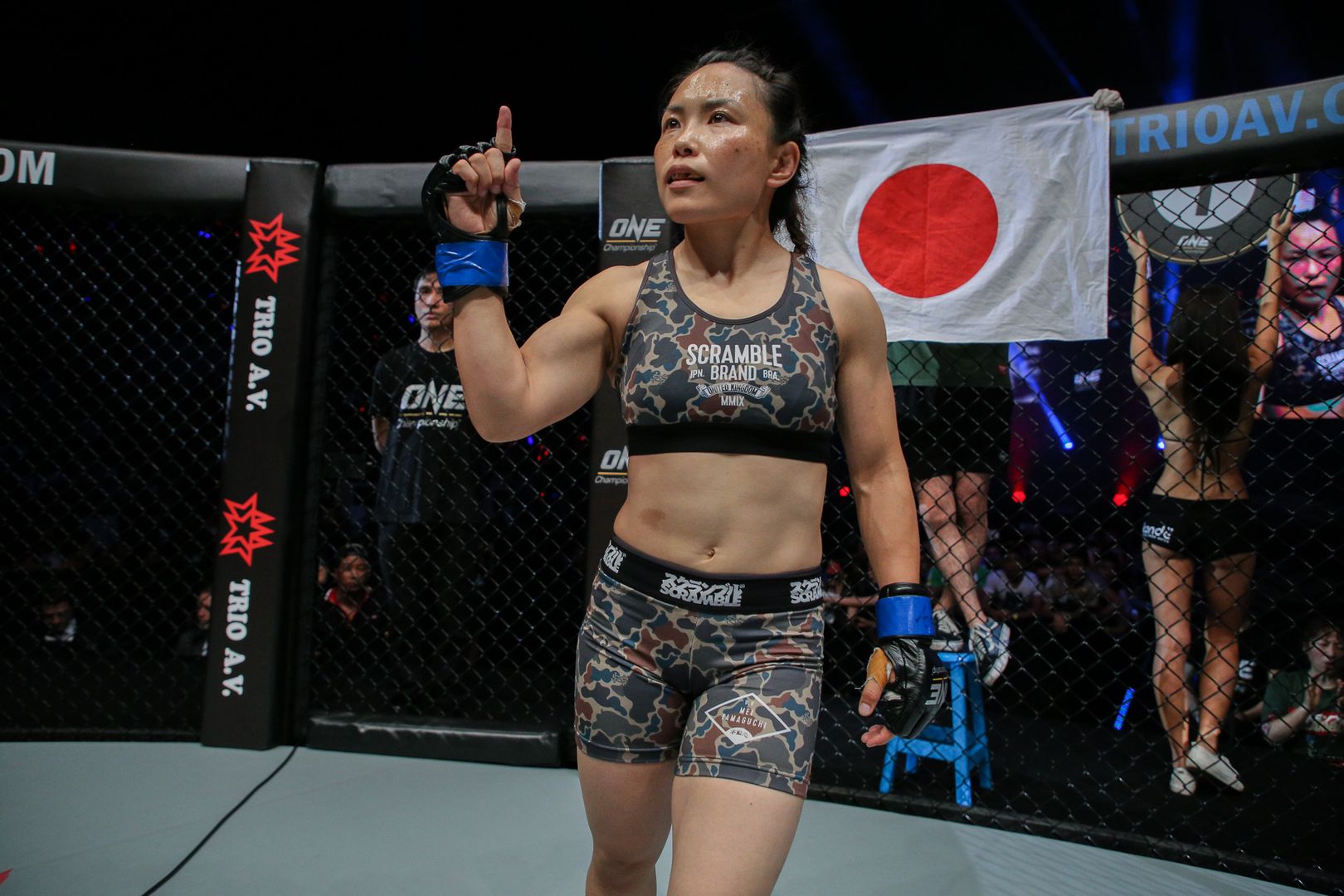 Yamaguchi also had an early introduction to martial arts. At the age of seven, while living in Los Angeles, USA, Yamaguchi’s father took her to a karate studio for her first lesson.

That was just the start, as “V.V.” went on to study kickboxing, Brazilian jiu-jitsu, and wrestling in her native Japan.

She made her professional mixed martial arts debut in March 2007, and gained a tremendous amount of experience in the years to follow. She picked up several titles in the cage and on the mats, including the DEEP Jewels and Valkyrie Featherweight Championships, before making her ONE debut against Lee.

The Road To The Rematch 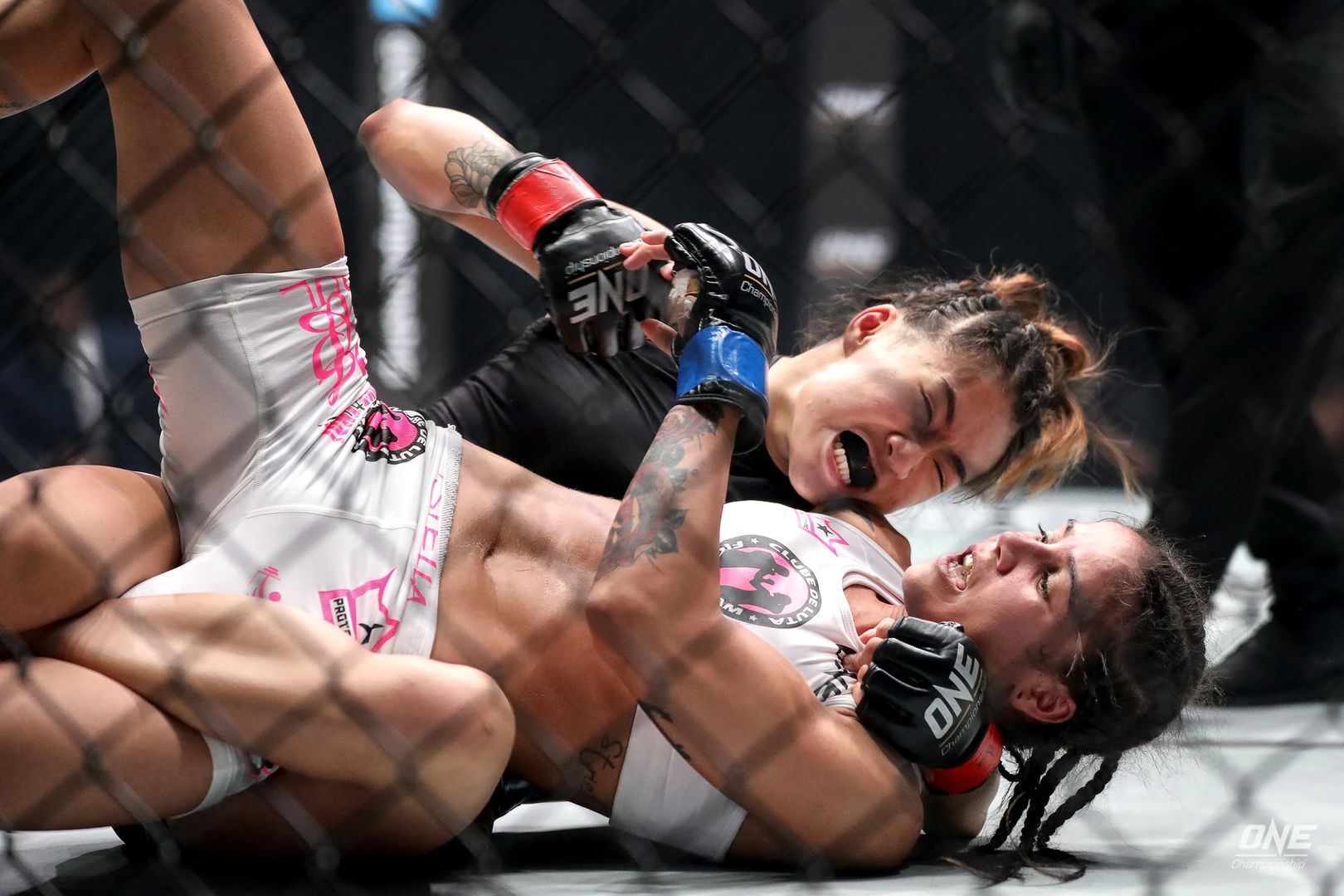 Following her win over Yamaguchi, Lee twice defeated challengers for her belt in sensational fashion.

“Unstoppable” made her first title defense against Jenny “Lady GoGo” Huang in March 2017, using vastly-improved striking to get the first TKO victory of her career.

She followed that up by submitting Brazilian striker Istela Nunes two months later, despite suffering from pneumonia.

Lee planned to give Yamaguchi a rematch at ONE: IMMORTAL PURSUIT in November, but a car crash stopped the Singaporean from competing. 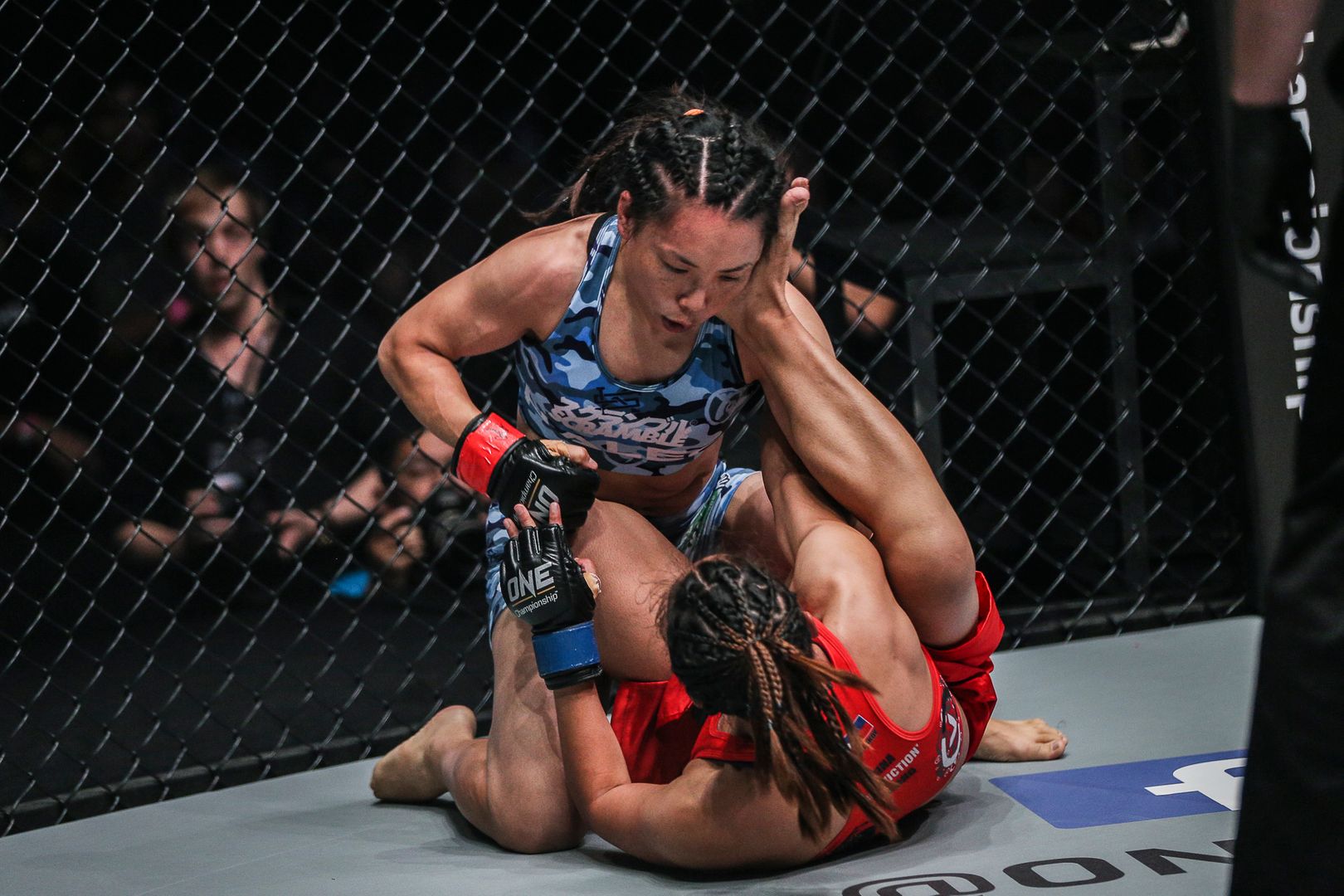 The Japanese atomweight remained busy, however, and strengthened her position as the top women’s atomweight world title contender.

Yamaguchi, who had submitted Huang via rear-naked choke in June 2017, avenged a previous loss to Team Lakay’s Gina “Conviction” Iniong in November – as Lee watched on in the arena. 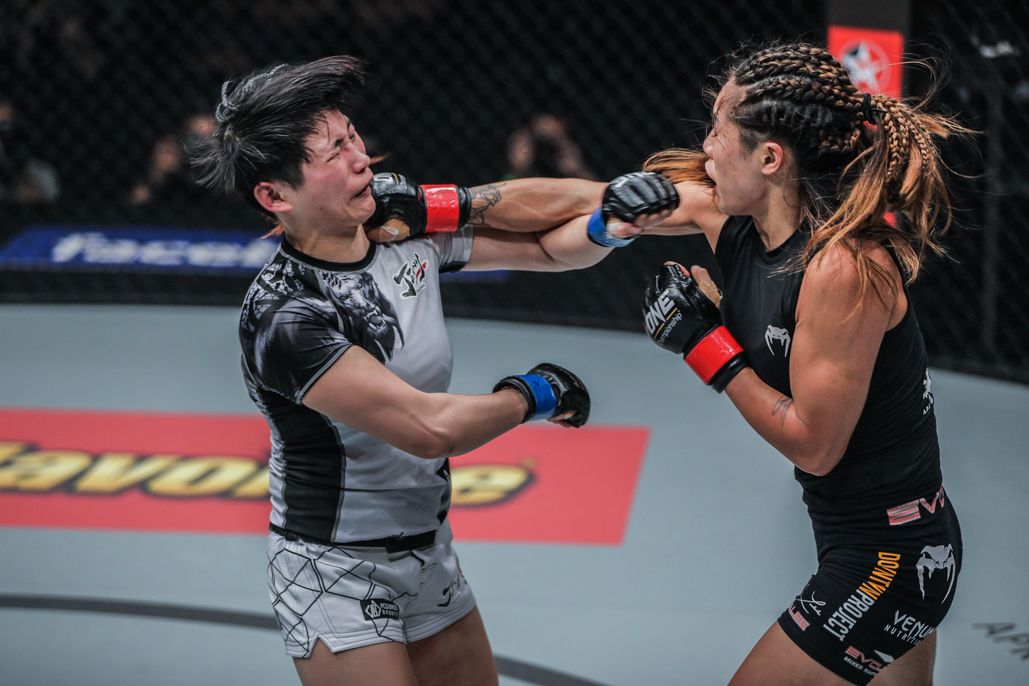 Lee was somewhat happy with her decision victory two years ago, but she is driven to get the finish this time around.

The Singaporean has enhanced her striking under the Muay Thai world champions at Evolve MMA and earned her Brazilian jiu-jitsu black belt in February. She is improved and feels refreshed.

“Since our first match, I have had two really great title defenses,” she says.

“I got to show how my game is evolving, and I have been working to tighten everything up and sharpen my skills everywhere. I feel really confident going into this match.” 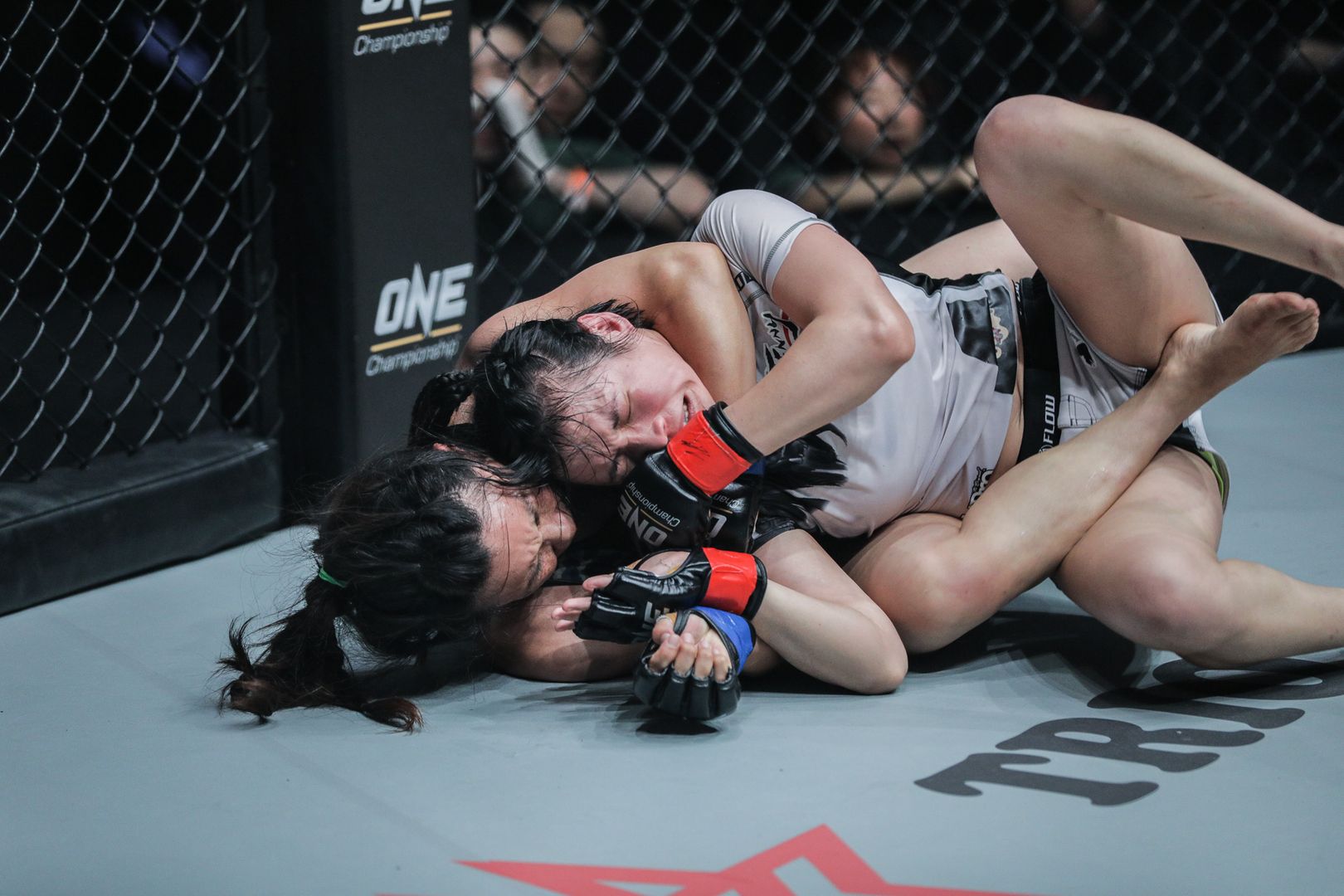 Yamaguchi has made some crucial changes to her training regime since her first encounter with Lee a few years ago.

She now has the help of a boxing coach, with the aim of weaving her karate, kickboxing, and other striking skills together. She has also earned a Brazilian jiu-jitsu black belt, demonstrating that her ground game has reached new heights

The Japanese atomweight believes these changes, as well as a more scientific approach to ONE’s weigh-in program, will lead to a stoppage victory and the atomweight world title.

“I cannot look for a decision, I have to finish her. That is the first priority for me, and I am well prepared for that – even if it goes five rounds,” Yamaguchi says.

“The last time when I first fought her we were moving a lot. Both of us were looking for the submission, and I was tired in the fourth and fifth rounds.

“Now I am working on how I can relax more, so if it goes the full five rounds, I can still move a lot. I am prepared for both of those scenarios.”

“What makes Angela so great is that she is so well-rounded as a martial artist. There is no weakness in any aspect of her game.

“She is a fabulous and creative striker. She has a varied and wicked submission game. She is super durable, highly intelligent, and supremely athletic. It is hard to find a flaw in Angela at all.

“There is going to be no secret recipe, or tricks up the proverbial sleeve. It is all about remaining sharp, focused, and sticking to her game plan, which must simply be to out-work Angela.”

“Angela is so young and still has so much room to grow. At the age of just 21, she is the best in the world. She has a tremendous drive to be the best, and she is not just a one-dimensional athlete. She can strike, grapple, and transition between the two.

“She needs to use all her weapons if she wants to leave Singapore with the belt. Angela needs to mix up the striking with takedown attempts. She has a high volume striking attack, and she uses punches and kicks very well. She likes to punch into the clinch, and use trips to bring her opponent down. She will need to control the top position and hunt for submissions.

“Angela is very explosive on the ground – she moves well and has a variety of attacks. Mei needs to stay heavy on top, and land ground and pound at each available opening. She has all the tools to capture the victory, and that big right hand is always a threat.”