ONE Championship's Submission Of The Year 2018 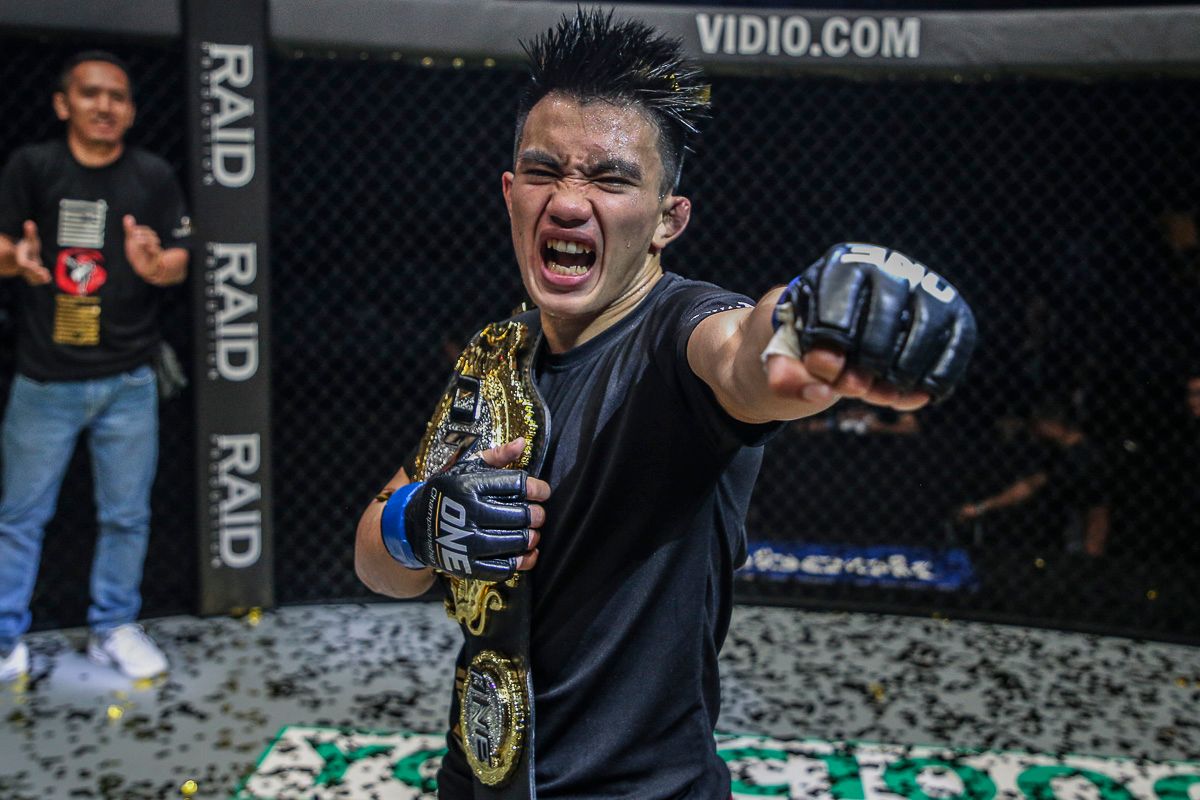 There were 167 finishes in ONE Championship throughout 2018, and for every spectacular knockout, there was a stunning submission waiting just around the corner to excite fans in equal measure.

There were unique products of the imagination, as well as more common favorites executed exceptionally.

Forcing an elite level adversary to tap out is impressive in its own right, but these grappling specialists did it in style.

Here is ONE Championship’s Submission of the Year 2018.

Will Joshua Pacio's “Passion Lock” make another appearance on 19 January?

Posted by ONE Championship on Saturday, December 22, 2018

Joshua “The Passion” Pacio and Pongsiri “The Smiling Assassin” Mitsatit squared off at ONE: REIGN OF KINGS in July, knowing that an impressive performance could punch their ticket to a World Title shot.

Team Lakay’s Pacio did just that by defeating his opponent with one of the most memorable finishes of the year – a shoulder lock variation he dubbed the “Passion Lock”.

Mitsatit is a dangerous striker who was unbeaten when the pair faced off, and held a remarkable seven knockouts from his nine mixed martial arts victories. The Baguio City man decided to take the contest to the mat in order to seize his advantage.

On the ground, Pacio’s positional dominance was evident, and his ground strikes forced the Thai to turn and give up his back. Pacio immediately threatened with a rear-naked choke.

Mitsatit looked comfortable defending his neck, but Pacio had something else in mind. He started by controlling “The Smiling Assassin’s” left arm with his own left hand, which led the Thai to believe Pacio was attempting to secure the choke with his right.

However, “The Passion” seized a two-handed grip instead, committing himself to a different route.

The strength of Pacio’s two arms to Mitsatit’s one allowed him to wrench the striker’s left arm behind his body, and from there, he torqued the isolated limb and forced a hurried tap from the devastating pressure.

Posted by ONE Championship on Wednesday, December 26, 2018

Ariel “Tarzan” Sexton and Kota Shimoishi engaged in a thrilling three-round battle at ONE: PURSUIT OF POWER in July, and it ended with a stunning finish, thanks to the submission creativity of the Costa Rican Brazilian Jiu-Jitsu black belt.

Sexton was landing hard punches to his grounded opponent in the final stanza, and Shimoishi looked for a single leg to try and improve his position.

Sexton was wise to his attempt, however. “Tarzan” stepped around to free his leg, immediately throwing it over the Japanese man’s right shoulder for a reverse triangle choke.

With a tight position and two free arms, “Tarzan” had plenty of time and opportunity to work for a finish. Still, he wasted none of it. He grabbed Shimoishi’s left wrist and elbow, twisting them into an Americana shoulder lock.

The combination submission attempt forced Shimoishi to tap, and gave Sexton the victory with this crafty two-pronged attack in ONE Championship.

Shinya Aoki’s submission repertoire is as varied as it is effective. The man they call “Tobikan Judan” is an all-time great in applying his ground attacks in mixed martial arts.

Against Rasul Yakhyaev at ONE: UNSTOPPABLE DREAMS, Aoki picked up another impressive win via triangle, but it was the speed and accuracy of the transition that set it a breed apart.

The former ONE Lightweight World Champion was working to pass his right leg through Yakhyaev’s half-guard and successfully freed himself, but rather than solidify a mount or side control position, Aoki – in true “Tobikan Judan” fashion — looked to attack straight away.

The Russian tried to turn towards his opponent to escape, but in doing so, allowed Aoki the space to put his left leg over his right shoulder to deftly set up a triangle choke.

Yakhyaev was fully ensnared in the tight submission. He tried to punch his way out, but Aoki tightened the choke, before adding an elbow crush to Yakhyaev’s right arm that left him no option but to submit.

Niimura entered the bout as a feared striker with an impeccable 75 percent knockout ratio, which would explain why the Russian opted to take the bout to the canvas early. He controlled “Yu-King” with his positional control and ground strikes until an opportunity to finish arose.

Bigdash worked to take his opponent’s back, but the savvy Japanese veteran saw it coming and tried to shake him off. He could not finish the job, allowing the 34-year-old Russian to throw his right leg over Niimura’s right shoulder to latch on to a reverse triangle choke.

Bigdash put on a tight squeeze with his legs and “Yu-King” was clearly uncomfortable, but with time running out, the Akhmat Fight Team representative saw another opportunity.

Niimura’s left arm was available, and Bigdash used his free hands to straighten it and force it over his hips. He steadily applied pressure to elicit a tap from the dual-attack of armbar and triangle.

Gianni Subba stepped up to the plate to face Brazilian Jiu-Jitsu black belt Reece “Lightning” McLaren in his hometown of Kuala Lumpur, knowing fully the threat that the Australian brings on the ground.

Subba did a fine job of negating McLaren’s wrestling in the first round, but a “Lightning” fast knee tap finally forced the action on to the canvas, and the 27-year-old Australian moved straight in to the mount position. Subba survived, but it was the same story in the second stanza.

Only this time, the PUMMA man capitalized immediately. From the mounted position, McLaren fell with his head deep in Subba’s left armpit, and he stayed tight to keep the arm isolated. The grappling phenom then looped his own left arm around the Malaysian’s neck, and slid off to side control.

With his bodyweight and squeeze quickly cutting off Subba’s circulation, McLaren forced his foe to submit just seconds after being taken to the mat, showing his potency when it comes to finishing on the ground.