ONE: GRIT AND GLORY served up an amazing night of martial arts action. We have it all… here!

ONE: GRIT AND GLORY served up an amazing night of martial arts action. We have it all… here!

ONE Championship returned to Jakarta on Saturday, 12 May, with ONE: GRIT & GLORY, and it was one of the best shows ONE has ever seen in Indonesia.

Not a single contest on the 11-bout card from the Jakarta Convention Center lacked drama, as our heroes faced off in mixed martial arts, kickboxing, and Muay Thai contests.

The name of the game at ONE: GRIT & GLORY was finishes, as seven match-ups ended inside the distance. However, each of the encounters that were decided by the judges offered just as much, if not more, excitement.

Here are five of the best highlights from another incredible night of martial arts action.

Yoshitaka “Nobita” Naito needed the perfect strategy to make it through five rounds and recapture the ONE Strawweight World Championship from Alex “Little Rock” Silva — the very same man who took it from him last December.

The Japanese grappler used his takedowns quickly. He was able to get Silva to the mat, control him, and nullify any submission threat the BJJ World Champion posed. When the bout did take place on the feet, he stayed active. He found success with punches, and ensured “Little Rock” could not build any momentum.

As soon as Naito saw his opportunity to take things to the mat again, he took it, and proceeded to use every trick and technique in his arsenal to dominate a world-class exponent of the ground game.

It was a masterful display of technical grappling, which was a real treat for fans of the ground game. Ultimately, Naito was able to reclaim the belt via split decision.

Leandro Ataides put on the greatest performance of his career to defeat Vitaly Bigdash by knockout.

The Brazilian looked composed and in control as he out-struck the former ONE Middleweight World Champion for the first two rounds of their match-up. In fact, “Leo” looked to be well on his way to a comfortable unanimous decision victory, but he seemed determined to make a statement.

Halfway through the final round, the Brazilian connected cleanly with a Superman punch that put his opponent on wobbly legs. He followed up with a huge right uppercut and finished his Russian adversary off with ground and pound. It was the first time the Russian powerhouse had ever been finished in his career.

Ataides was overwhelmed with emotion in victory, having earned a shot at the ONE Middleweight World Championship with his performance.

The pressure was on Stefer Rahardian to deliver at home in Indonesia and maintain his undefeated record, but you would not have known it.

The East Jakarta native was making his first appearance in the strawweight division against Himanshu Kaushik, and looked to be at ease in his new weight class. He chased the takedown from the first minute, and it did not take long for him to get the bout to the mat.

Once it was there, Rahardian did what he does best — taking the back, securing the neck, and making his opponent tap to a rear-naked choke. It was his fourth first-round victory via that submission in the ONE cage.

If you were in the mood to see two hard-hitting big men throw down, then Lithuania’s Sergej Maslobojev against Croatia’s Antonio Plazibat was for you.

The ONE Super Series stars went toe-to-toe in a 95-kilogram kickboxing bout, and unleashed the full force of their punches, kicks, and knees at one another.

Though Plazibat appeared to wobble his opponent with a knee, it was Maslobojev who came out on top following several powerful exchanges.

After beginning the bout with some crisp straight punches and leg kicks, he added hooks, uppercuts, and even a spinning back kick into his attack. As the contest wore on, he was forcing the 2017 K-1 Heavyweight Grand Prix Champion to back away to avoid the onslaught.

In the end, the Lithuanian earned a clear unanimous decision victory.

The first few months of 2018 have been spectacular for Priscilla Hertati Lumban Gaol.

The Indonesian followed her first two wins of the year with a first-round submission of Rome “The Rebel” Trinidad, bringing her tally of wins up to three in fewer than four months.

Trinidad seemed happy to engage with “Thathie” in the clinch, but she left her neck open to be caught in a standing guillotine choke. The match did not end immediately, but with less than a minute gone, Gaol had time to be patient, adjust her grip, and squeeze for the finish when the opportunity was right.

Once the hold hit the floor, it was all but over. Trinidad tapped, and the Indonesian warrior quickly completed her 2018 hat trick of victories. 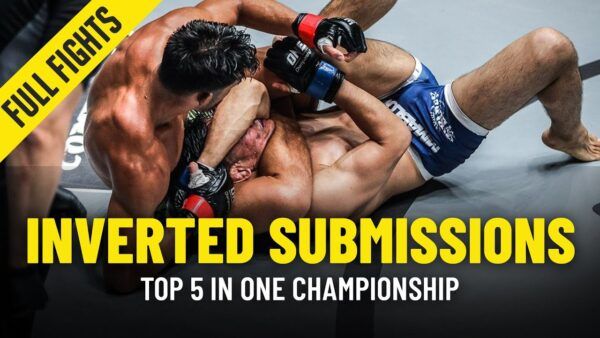