Silva captured the ONE Strawweight World Championship after a hard-earned unanimous decision victory over defending champion Yoshitaka “Nobita” Naito at ONE: WARRIORS OF THE WORLD in Bangkok, Thailand on Saturday, 9 December.

Naito went into the bout as the undefeated champion, but Silva delivered a tremendous performance to secure the judges’ verdict. He handed the champion the first loss of his career, after five hard rounds saw the action ebb and flow in a breathtaking contest.

The ground specialist put on a stand-up clinic to become the ONE Strawweight World Champion!

In a thrilling battle, the two elite grapplers started out the contest looking to strike. But as the bout went into the championship rounds, it became a war of attrition, with both men showcasing their grappling skills and considerable conditioning, with neither man backing down.

The opening frame kicked off with Silva, a Brazilian who trains out of Evolve MMA, darting in and out looking to land power punches.

Naito, a product out of Tokyo, Japan’s highly-regarded Paraestra Matusdo gym, looked to counter and score with kicks from distance. The champion’s constant movement highlighted his limitless energy, while the challenger looked composed, checked Naito’s attacks, and returned fire with heavy kicks to the champion’s legs.

Those leg kicks would go on to play a major part in the bout, as Silva persisted in his punishment of Naito’s lead leg throughout the contest. “Little Rock” continued his striking assault in the second round, noticeably slowing his opponent’s movement with those chopping strikes while scoring with overhand punches. He even briefly wobbled the champ with a solid left. As the tilt passed the half-way point, it was clear that Silva was pushing the pace, dictating the pressure, and forcing Naito to keep circling the outer reaches of the cage. The Evolve MMA product landed the most significant punch of the bout in the third, when he floored “Nobita” with a perfectly-timed right cross.

Naito’s successes were few and far between, but a late takedown in the round showed that he was still very much in the contest. Indeed, he had predicted a fifth-round submission finish, and had weathered an early storm when he dethroned former titleholder Dejdamrong Sor Amnuaysirichoke to win the belt.

The Japanese athlete’s strategy to take Silva into the deep waters of the championship rounds worked. Silva showed signs of slowing down, so Naito began to push the pace in the fourth stanza and worked his way back into the contest.

He finally scored a takedown, but was unable to lock up a submission against the BJJ world champion, whose seasoned mat skills ensured the champion had no opportunity to finish the bout.

Sensing the tide beginning to turn, Naito returned to his wrestling in the final round, looking to put Silva’s back up against the cage. The champion grabbed a guillotine choke as “Little Rock” looked to work his way back to his feet, but the Brazilian powered out of it.

With one minute remaining, “Nobita” looked to take Silva’s back and make good on his prediction of a fifth-round rear-naked choke victory, but Silva doggedly kept the champion at bay as the bout went all the way to the judges. 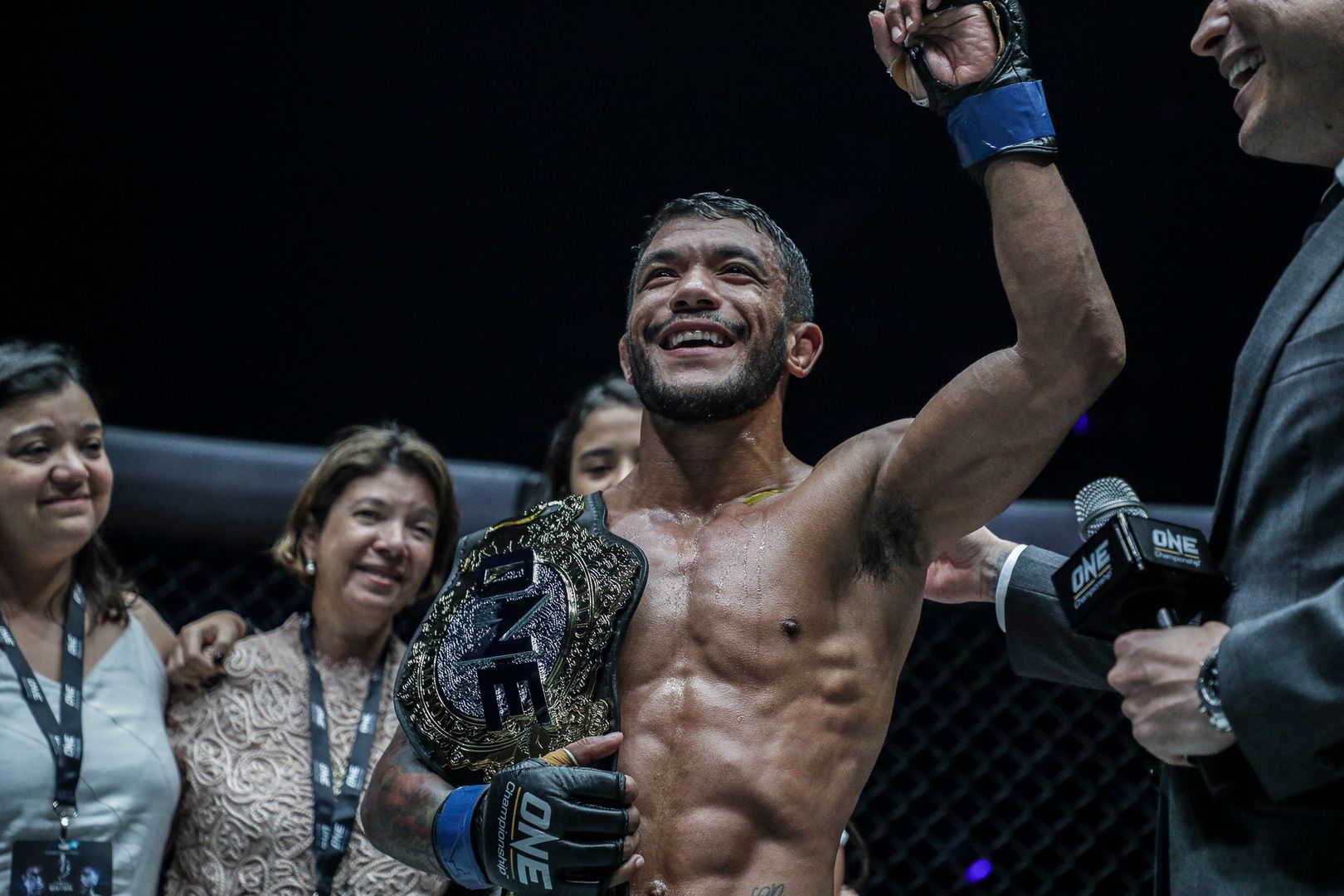 After the judges rendered their decision, Silva was declared the new ONE Strawweight World Champion, and instantly took the opportunity to pay tribute to his teammates at Evolve MMA, who had helped prepare him for the bout.

“It feels like a dream. If it’s a dream, please don’t wake me up,” he smiled. “It’s such a blessing for me.

“It’s a lot of hard work. Hard work pays off. I want to thank all my team at Evolve Fight Team. This is my belt, but I want all you guys to feel like a champion like me.