A part-time singer with a degree in communications might not sound like the typical resume for a mixed martial artist, but then again, Nyrene “Neutron Bomb” Crowley is not your typical athlete.

The Bali MMA representative will look to add one more accolade to her portfolio when she makes her promotional debut against Itsuki “Strong Heart Fighter” Hirata at ONE: WARRIOR’S CODE in Jakarta, Indonesia on Friday, 7 February.

Before her women’s atomweight clash inside the Istora Senayan, learn a little bit more about the 30-year-old whose eclectic life led her to ONE Championship.

Crowley, who was born and raised in East Auckland, New Zealand, was heavily involved in sports during her adolescence.

The future martial artist came from a family that loved athletics, and she was a natural at several different sports including netball, running, and rugby. She was even a junior gold medalist in the 2008 National Weightlifting Championships.

“Growing up in New Zealand, for me, just consisted of sports — all day, every day. I became really competitive playing sports. That is where my competitive nature comes from,” she explains.

Though Crowley also loved to sing in her spare time, her main focus outside of sports was her education. In fact, she attended the Auckland University of Technology and graduated with a Bachelor of Communications.

“I did a major in television production, with a minor in journalism,” she adds.

“I was really set on getting into the media industry, or using my degree to get me a good job. I ended up working for the New Zealand government.”

Winner by unanimous decision. Was a tough fight today but thank you to everyone that came out supported. My wild stables trainers and family. My parents, and my girl @graciececilia. I'd never get my ass in the ring if it wasn't for you lot. Thankyou for the opportunity @psycho_suttie and Carz. Photo cred to @kt2quick. Thinking of you @shannonreece and Mal x #grindtime #winning #muaythai #wildstables #loveittrainit

Crowley had set up a comfortable life for herself. She had a good-paying job and still participated in sports as much as time allowed.

Soon, however, her life took an unexpected turn.

While preparing for an upcoming rugby match, she stumbled across a group of mixed martial artists, who were helping her get physically fit for the competition ahead.

“I was representing my country in a tag rugby league,” she remembers.

“The boot camp was insane. It was intense, and the more I kept coming to these boot camps, the more the trainers were talking me into coming to the gym. I turned up, and as soon as I started training, it was like a drug to me — I just got addicted.”

The lifelong athlete progressed rather quickly.

Just six months into her training, she made her mixed martial arts debut. The rush and excitement she experienced that night motivated her to devote all of her free time to her training.

“I dropped all the other sports I was playing at the time, which other people were not too happy about, but that is kind of how I got into it. Straight after that first fight, that was it. This is what I wanted to be doing from now on,” she confesses.

“Martial arts was the first, and only, thing that exposes you for your vulnerabilities, and what you really need to address within yourself to become a better person, a better fighter – everything.”

It was not long after she started training at Auckland MMA and Wild Stables that Crowley decided to give up her day job before moving to Thailand to pursue her new dream.

"All our dreams can come true if one has the courage and determination to pursue them" Sacrifice is a funny thing. You have to almost remind yourself everyday why you do what you do. This picture represents everything for me. The sacrifice, the tears, the happiness and most of all the love for the sport. Not many people know how much we all sacrifice to succeed in this sport, and although it is hard at times; it is by far the most rewarding thing I have ever experienced in my life. I am blessed with a lot. An amazing team at Wild Stables, family and friends that love me and support me beyond all measure, and trainers that believe in me more than I believe in myself. @madetofit you have been the driving force to this title and although this is the beginning, I need to acknowledge that without you dealing with my mental breakdowns, my tears and my smart mouth I would not be here today. I fight to make you proud and I can't ever thank you enough. Roger Earp, Makoto, Hamish, Van, Dana and my homie @_themarshalletk I am forever grateful for your wisdom and the time you give me to make me a better version of myself every day. This is the beginning. #winnerwinner #wkbf #atomweight #titlefight #goals #blessed #grateful #emotionalpost #muaythai #girlfight

Crowley gave up her promising government career to pursue a new ambition in mixed martial arts, and it seemed like stepping into the unknown would be the toughest possible hardship she would face in her young career.

As it turns out, that did not come close to the turmoil she felt when it was time to tell her mother and father about her new life plans.

“In terms of the biggest challenge for me, it was getting my parents on board,” she admits.

“My family has always loved me and supported me, but I think fighting really got to them. For me, they kind of had their own dreams and plans, and bless their hearts, they wanted the best for me. They did not see that me doing fighting was going to provide.”

With a sister — Cheree, who goes by the ring name “Dakota Kai” — currently signed to World Wrestling Entertainment, Crowley’s parents have already had to adjust to their children gravitating towards non-traditional occupations.

Over time, however, “Neutron Bomb” has been able to chip away at her family’s concerns about her career path. She even convinced her parents to attend one of her matches in New Zealand before she relocated to Thailand.

“The more I keep winning, and the more I can reassure them that I’ve got this, the more that they will come on board,” she says.

“They still get a little finicky about when I get hurt, or when I show them pictures of when I have black eyes. The challenge to get them on board was probably the hardest thing for me because I would have hated it if they were not on board.” 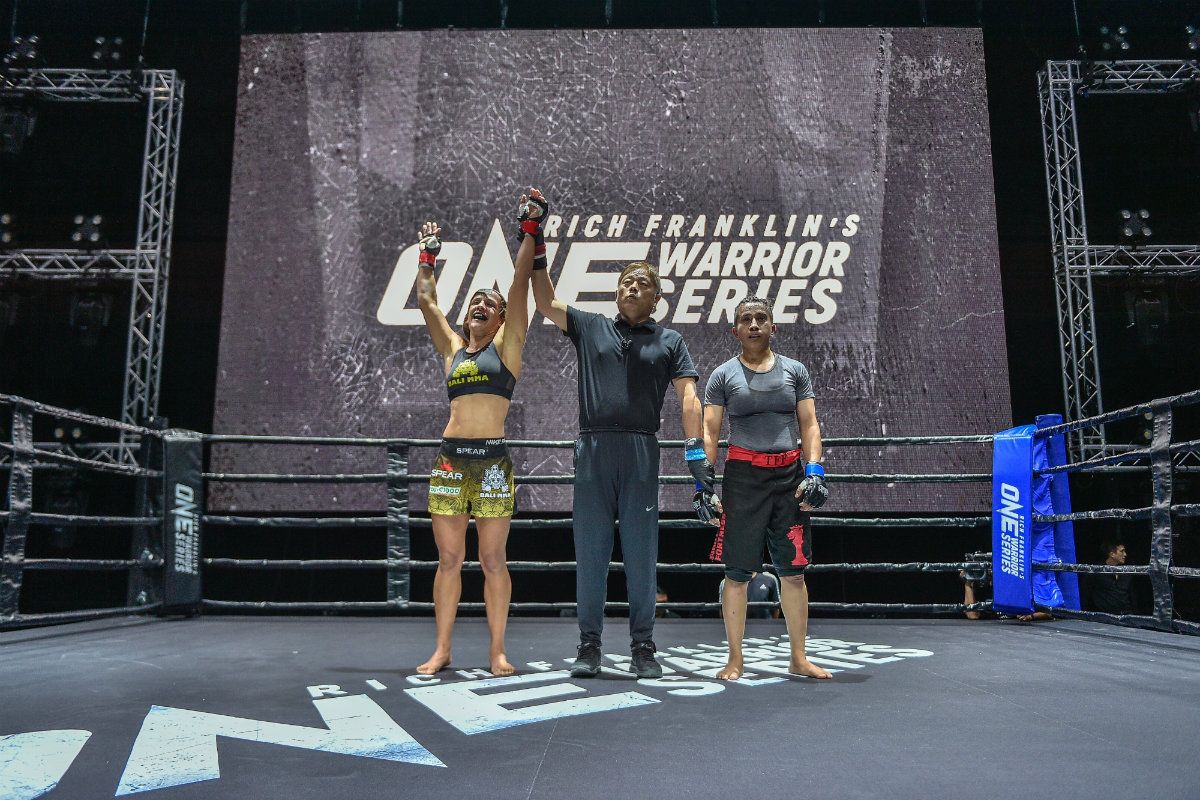 In early 2018, Crowley relocated once more — this time to Indonesia, where she began working alongside a long list of ONE veterans at Bali MMA, including Andrew Leone.

Shortly after arriving, the Kiwi saw a message online about ONE Warrior Series (OWS). The documentary series was looking for prospective talents, and that piqued her curiosity.

“I hadn’t been in Bali that long —  maybe two months — and then an opportunity came along,” she explains.

“I actually saw it online, but I did not even think to enter, because the trials they were having were in Jakarta, and I was not sure I would have money for the tickets to go to the trial.

“I mentioned it to my trainers, and then a couple of weeks later, they pulled me aside. My head coach said, ‘We are going to get you ready. The trials are in two weeks, and the tickets are all sorted.’ They actually entered me online without me knowing on my behalf.”

The kind gesture from her coaches paid off, as Crowley got accepted into OWS.

She earned a pair of victories — a unanimous decision win over So Yul Kim at the Season 1 Finale in March, and a second-round submission over Anita Karim at the Mid-Season 2 Finale in July.

Although “Neutron Bomb” experienced a few hurdles in her following two bouts in the OWS ring, she performed admirably and signed a contract to compete on the main roster earlier this month. By doing so, she became the first Kiwi female to sign with ONE Championship.

Now, the Auckland native is gearing up for her promotional debut against Hirata at ONE: WARRIOR’S CODE on 7 February. Should Crowley beat the undefeated Japanese rising star, then it will propel her closer to her ultimate dream.

“My goal when I left New Zealand was to be a World Title holder within two years, so I am really working towards that,” she says. “I would really love to hold a title in ONE Championship.“