Gina “Conviction” Iniong (6-3) has learned the bittersweet lessons that come with every setback, and now, after hitting a stumbling block four months ago, she is preparing to reemerge with the vast knowledge she has gained.

Last November, the Team Lakay atomweight dropped a unanimous decision to top contender Mei “V.V.” Yamaguchi on short notice. Although the loss snapped her three-bout win streak and derailed her momentum, Iniong admits she discovered many things about herself that night.

“I was nervous, and I really wanted to win, so that took me out of my element a little bit,” the 28-year-old Filipina says.

“I learned my lesson now, and moving forward, I have to be confident and relaxed going into the cage. I worked very hard on my grappling, because it has been a consistent weak point in my game.”

That should serve especially beneficial in her upcoming tilt later this month. “There is a lot of pressure on me to perform, because I am considered one of the top competitors in the division. Although I consider myself still in the development process, a lot is expected of me, and with each bout, I have to give it my absolute best,” Iniong says.

“I know if I had beaten Mei in my last bout, I would have come very close to a title shot. Instead, I was a step slower the entire night, and I lost. Still, I was happy to be able to showcase my skills in such a huge bout.”

Iniong joined ONE Championship in April 2017, and tore through fellow countrywoman Natalie “The Kilapino” Gonzales Hills in her promotional debut at ONE: KINGS OF DESTINY. The Team Lakay striker decimated Hills with a fierce stand-up game to claim a unanimous decision victory.

She followed that up with a second-round TKO victory over Indonesian star Priscilla Hertati Lumban Gaol at ONE: LEGENDS OF THE WORLD in November.

For “Conviction,” those were pivotal moments in her career. Not only did winning on the global stage provide a massive boost to her confidence, but it reaffirmed she was more than capable of competing against the world’s best athletes.

“To be honest, being able to perform in front of millions of fans is a dream come true for me,” she reveals.

“I never imagined I would be at this level, but through hard work and the belief that my coaches have shown in me, I made it to ONE Championship. I am truly proud to be here.”

To continue making her fans proud, Iniong will have to be at her best later this month, and her grappling will certainly come in handy against Huang.

Based out of Chinese Taipei, Huang is a black belt judoka who specializes in ground combat. She won her first five professional matches over quality opposition, including Iniong’s Team Lakay stablemate April Osenio, whom she submitted via gogoplata. That earned her the nickname “Lady GoGo,” and won her Submission of the Year honors in 2016.

The Taiwanese atomweight was competitive in her subsequent two matches, but ultimately fell to in her title bout against divisional queen Angela Lee in March 2017, and then number one contender Yamaguchi later that June.

In her time away from the ONE cage, Huang has trained at some of Japan’s most prestigious gyms before returning to her native Chinese Taipei to further cultivate her skills.

Despite the tough challenge the 27-year-old presents on the mat, Iniong feels her improved mat skills should more than hold up. 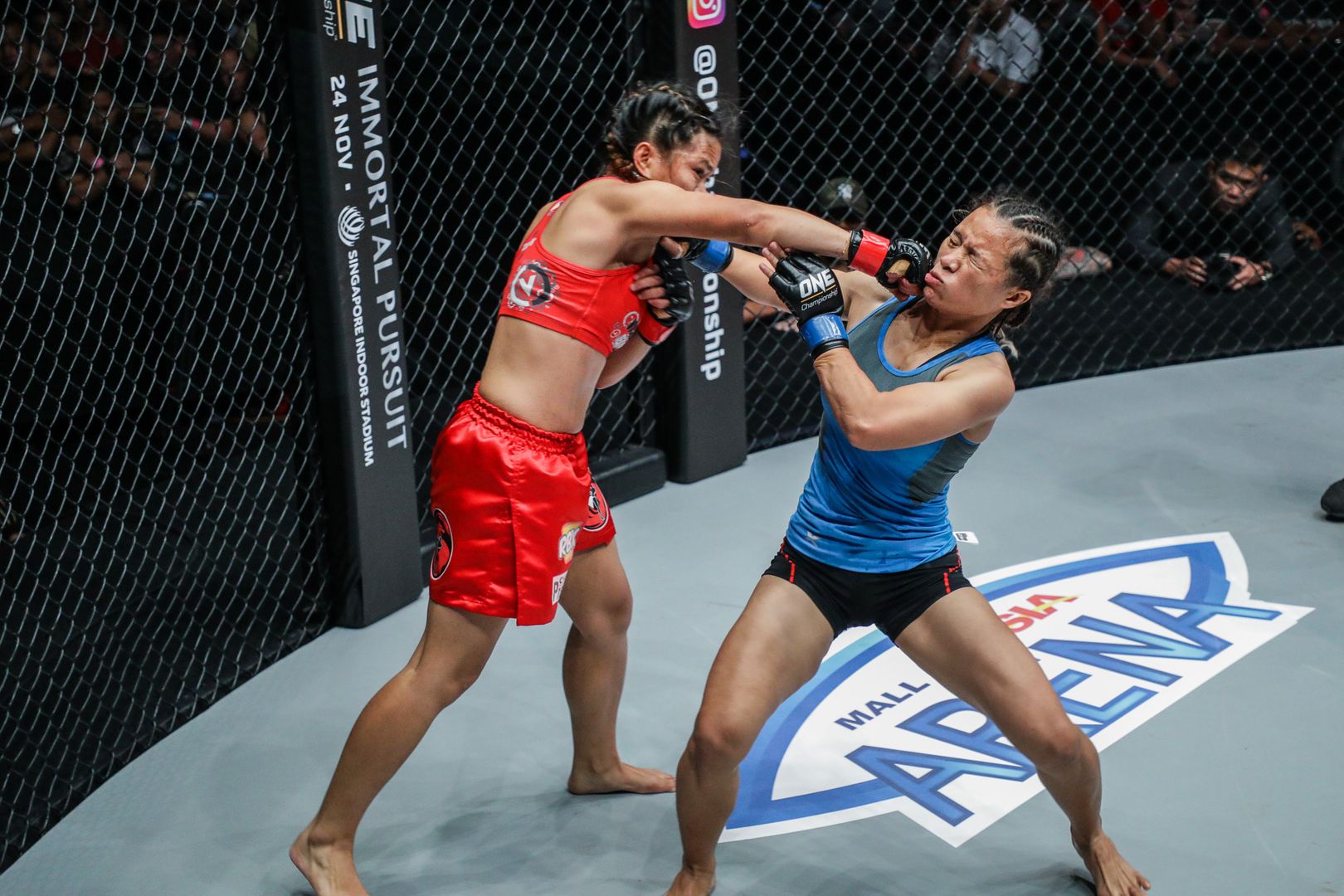 “I know I have to keep the action standing, but in case we do hit the ground, I will be prepared. Victory is always on my mind, especially during training. It is what motivates me,” the Team Lakay striker explains.

“Jenny Huang is a very talented martial artist, and a former world title challenger. I cannot underestimate her, even for a second. Most of her wins have come by submission, so I have to be really careful. But this should be a good test of my grappling skills, to see if I have improved in this area. I always want to test myself against the best.”

This May, Lee and Yamaguchi will clash in an epic rematch at ONE: UNSTOPPABLE DREAMS in Singapore. If Iniong can defeat Huang, and make a statement in their April bout, she could conceivably find herself as the next challenger for the women’s atomweight world title.

Although this is certainly a possibility, “Conviction” maintains she is not taking Huang for granted. While she is entirely focused in her upcoming tilt, she is also keeping an eye on the future. 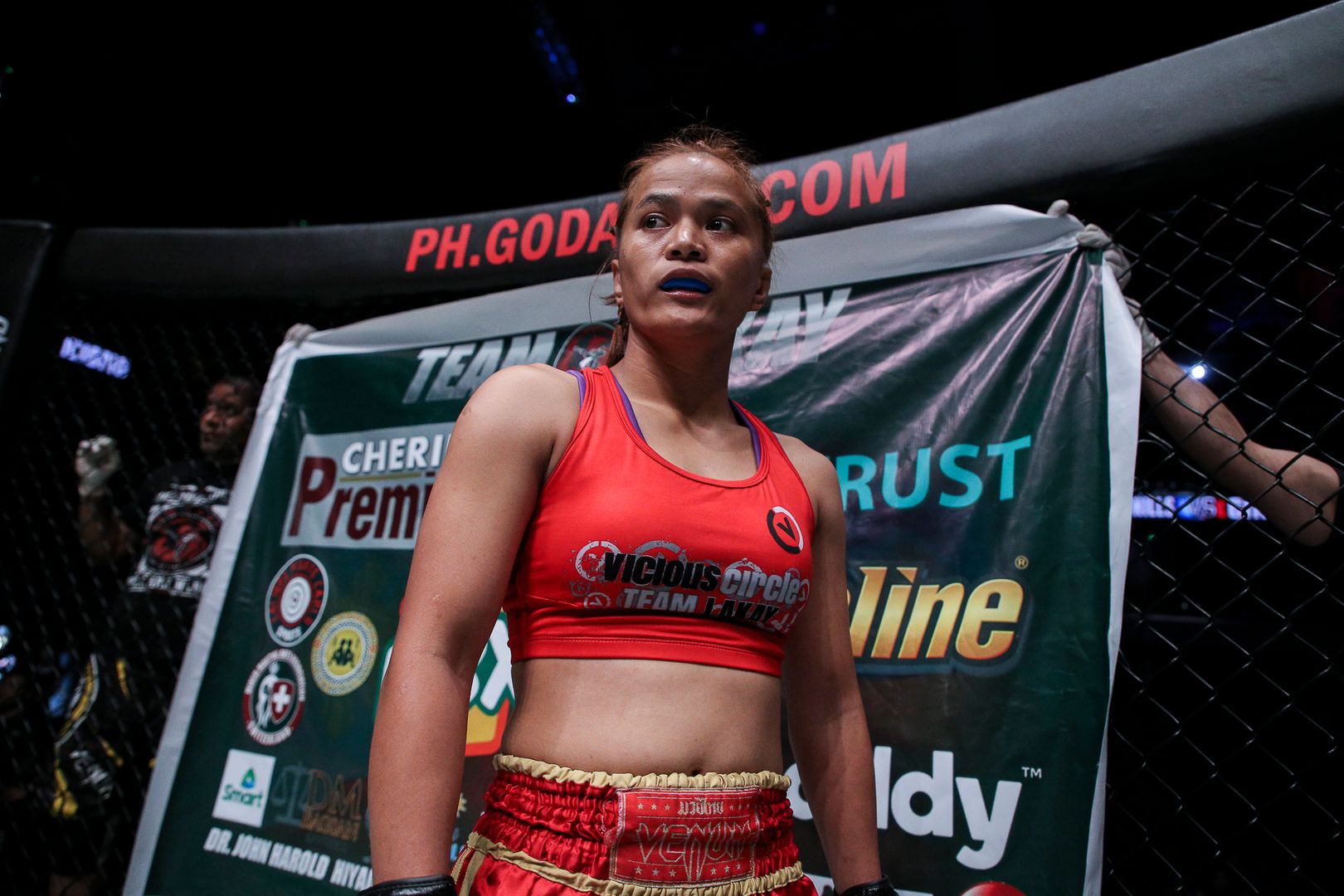 “I want whoever wins that match, but I am not looking past Jenny Huang right now. I know what’s at stake here,” Iniong says.

“This is another opportunity for me to prove that I am ready to face the champion, and if I can beat a former world title challenger, then I can move up in my career.”

“Both Angela and Mei are extremely tough competitors. It should be a very entertaining match. I will be watching it closely.”