I did not have any expectations of Ho Chi Minh City when I received the news that I would be traveling there to film content for the lead-up to ONE: IMMORTAL TRIUMPH.

But if I had any expectations at all, I think it would have certainly exceeded it. I left the beautiful city feeling like I’ve learned so much about the country. I wasn’t expecting to fall in love with Vietnam the way that I did.

Sometimes when I travel to certain places, I feel a sort of connection, and Vietnam was one of those places. We were trying to spread some insights on martial arts in the country, but what really happened was the other way around.

Ho Chi Minh City was so cool, and I was pleasantly surprised by how hospitable the people were. Every time I walked down the street, I felt as though everyone greeted me with a smile.

If you’re a coffee lover, be sure to try the egg coffee there. I’m not a coffee drinker, but at least the whipped egg topping was enjoyable for me. It had a very velvety dessert-like texture, which was sweet, and I’d describe it as something like a creamy meringue.

I thought the food was out of this world too. It wasn’t good… it was perfect. The grilled beef and sticky rice in bamboo made on coal were so good, I ate it two nights in a row at the Ben Thanh Street Food Market.

We stayed in District 1, and for the sake of time, we didn’t venture too far out. Apart from the food, I managed to visit the Jade Emperor Pagoda and the Notre Dame Cathedral, and I took a ride on a rickshaw.

Something that would complete my trip, however, would be stopping by the floating market. It’s a couple of hours away, and I’m not too sure if I could take half a day off and get away this weekend when I’m back in town. But if I can, I would love to. I’m so curious about the country after experiencing Ho Chi Minh City, a place I would describe as “backpacker central.” 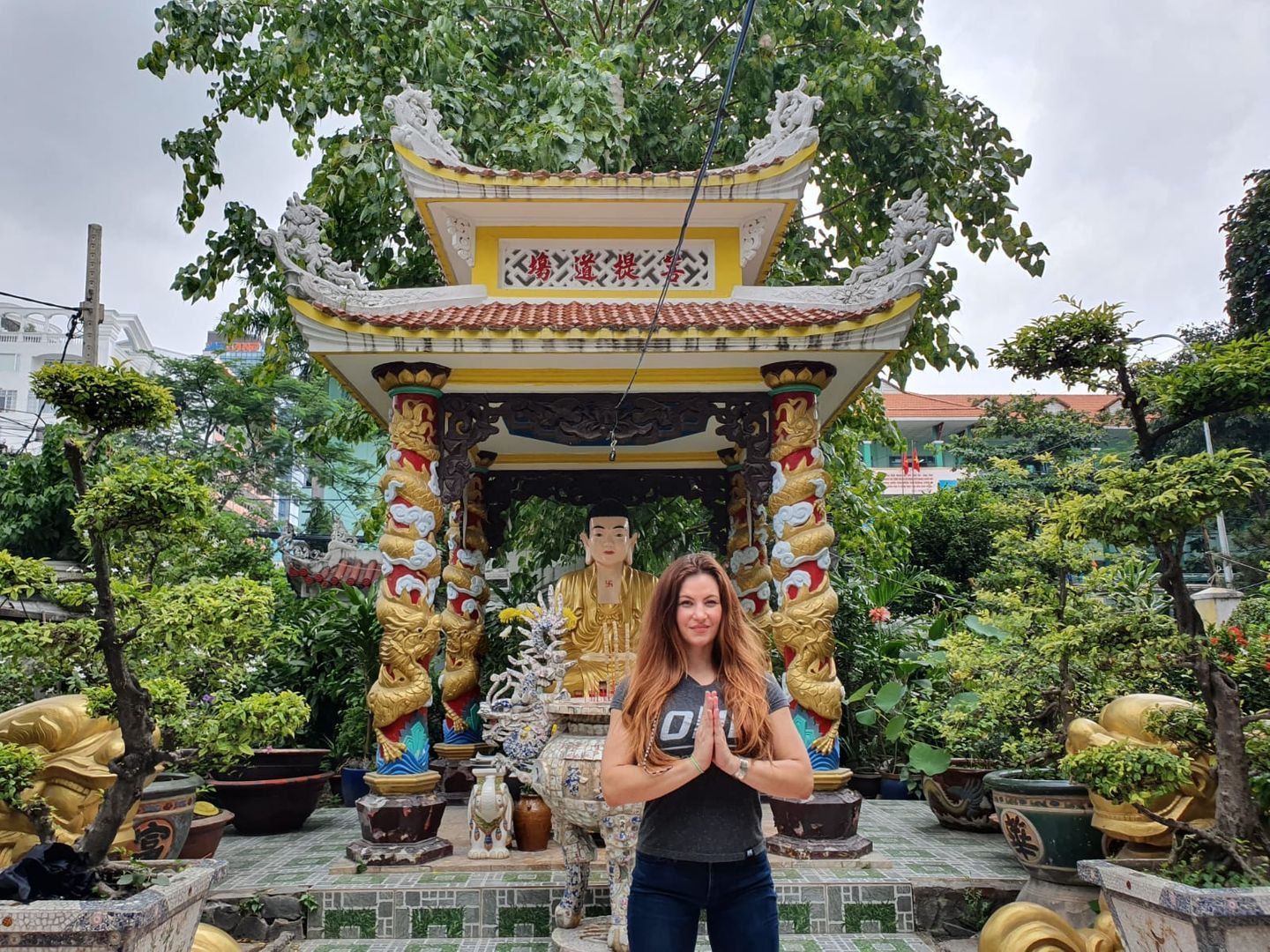 In all this traveling, one thing was evident – the fans in Vietnam were ready for ONE: IMMORTAL TRIUMPH. I assumed the country was not going to have a strong fanbase per se, but clearly, I was wrong. The people knew ONE was coming, and the fans were very excited about it.

The love for martial arts could be witnessed during my two-day stay there.

I went to Saigon Sports Club to watch Bi Nguyen hit pads, and the gym was beautiful. The facility was state of the art. It was huge and really nice. There were a lot of women at the gym too, which was great to see. Based on my short stay there, one thing I could share is that boxing is one of their favorite martial arts, alongside jiu-jitsu.

While there, I had a conversation with Bi about the relevance of mixed martial arts and a bit more on the history of martial arts in Vietnam.

Spending time interviewing her was special. She seemed so happy to be competing in the country she calls home, a place where she was born and raised for the first six years of her life.

Bi speaks Vietnamese and according to her, people are absolutely ready for this one-of-a-kind martial arts show. She also believes by the time the first ONE event here ends, it will inspire more people to pick up martial arts in her country.

The event is going to be only kickboxing and Muay Thai, but Bi thinks her country is ready for mixed martial arts, too. She has every intention to win her Muay Thai bout against Puja Tomar, but she wants to transition back into mixed martial arts after the match. According to Bi, her biggest hope is that ONE brings that element of martial arts to one of the future shows there.

With this mindset instilled, I feel Bi’s bout against Puja could go on to become one of the most entertaining bouts of the night.

Bi is good with her timing, and although she has never had a reach advantage against any opponent, she still possesses devastating knockout power as seen in her bout against Bozhena Antoniyar, where she dropped her opponent in under a minute. Bi also told me she holds the record for the shortest reach on Sherdog.

Despite that, she laughed it off and totally embraced it. I agree, reach doesn’t matter if you know how to use your body to your strengths.

Although she may have a reach disadvantage, facing someone like her – who is unique in that sense – is going to be hard. She’s a southpaw, but because of her short reach, she forced her timing to be excellent. She has the capability of drawing her opponent into her game, and then when she capitalizes, she lands her power hand or kicks very effectively.

Meanwhile, I’d describe Puja as someone who loves to attack. She is not overly patient with her strikes, and if her opponent hits her with any singular attack, she is going to come back with a flurry of combinations. She makes you pay for threatening her with ineffective combos.

Unlike Bi, Puja switches her stances often, so she is very unpredictable. She is an Indian national wushu champion who has power in her right hand.

Apart from all that, she is very experienced and has experience competing in enemy territory. I remember the last time she fought in Jakarta against Priscilla Hertati Lumban Gaol — she left Indonesia with a huge upset. She accepted this bout when others turned it down for a reason, and that’s because she knows she is fully capable of beating the hometown hero.

This match could go either way, and so could the other matches on the card.

Overall, I could not have expected all of this when I went to Vietnam last week. I felt martial arts wasn’t big there, but I was totally wrong, and I cannot wait to be back for this weekend’s event!