Nong-O Gaiyanghadao entered ONE Championship as one of the most decorated Muay Thai competitors of all time and showed why with a pair of near-perfect performances this year.

His introduction to ONE Super Series came in April when he put on a show against elite French striker Fabio Pinca.

He returned to action against Mehdi “Diamond Heart” Zatout, another Frenchman, in October, when he wowed an enormous global audience with his skill and power.

The Thai picked up back-to-back victories after being out of action for more than three years, and he has revitalized his career in the world’s largest martial arts organization.

Nong-O's ONE debut was greatness personified!

ONE: HEROES OF HONOR in Manila, Philippines – where Nong-O met Pinca in his debut – was the first card to host the all-striking bouts under the promotion’s banner, and the four-division Lumpinee Stadium Muay Thai World Champion feels privileged that he was one of the athletes chosen to lead the way.

“I am very proud to have had the opportunity to be one of the first athletes to compete in ONE Super Series,” he says.

“To have the opportunity to show the world the art of Muay Thai and represent Thailand is something that I take seriously.”

His cerebral dismantling of Pinca was the perfect way to introduce himself on the global stage for martial arts. The Evolve representative showcased a calculated game plan to outclass the world-class Rajadamnern Stadium Muay Thai World Champion.

Against Zatout, Nong-O was just as clinical, but more aggressive. His full arsenal of punches, kicks, knees, and elbows was on display as he came close to finishing the Venum Training Camp man in the second round.

Nong-O sent Bangkok into a meltdown with this Muay Thai clinic ⤵️Download the ONE Super App now ???? http://bit.ly/ONESuperApp

“I was happy that I was able to control and dominate the match, and was able to display the art of Muay Thai to the fans in an exciting way,” says the Thai hero.

Nong-O’s second victory was even sweeter as he competed in front of his countrymen in Thailand on the massive ONE: KINGDOM OF HEROES card that was watched by 25 million fans around the world.

“It felt great to be back competing in Bangkok after so long. To be able to compete in front of the Thai fans, representing Thailand on the global stage, was amazing,” he says.

“It’s hard to rank all my career moments, but it definitely was a special and unique moment for me – something I’m proud of.”

Following his flawless 2018, the 32-year-old superstar can now look ahead to 2019 and the road that is ahead of him in ONE Super Series. The bantamweight division has taken shape since April, and there is no shortage of elite athletes with the ONE gold in their sights.

Nong-O’s performances put him at the front of the queue for a chance to compete for the inaugural ONE Muay Thai Bantamweight World Title, and he would love to become the division’s first kingpin. 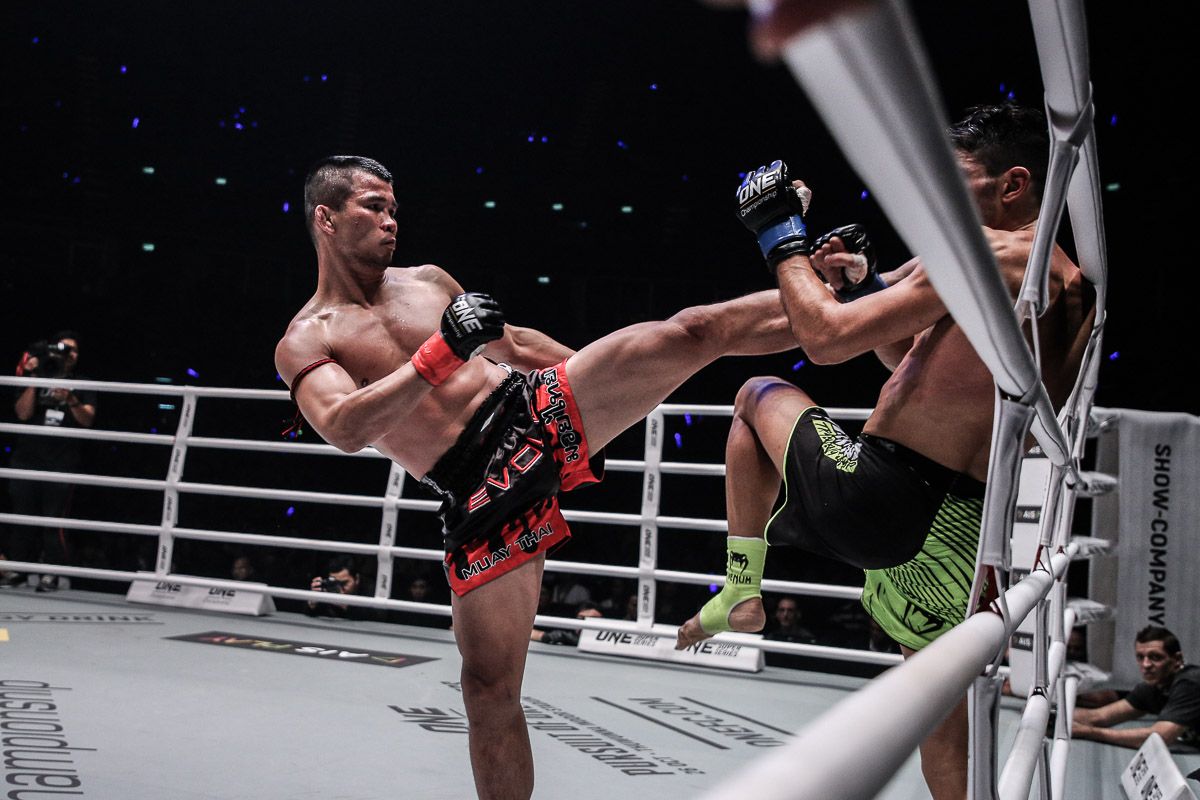 “If I am selected to compete for an ONE World Title, I would be very proud,” he says.

More than anything, Nong-O is eager to return to action and compete in The Home Of Martial Arts. His love for competition has been rejuvenated, and he is hungry for success once again.

The martial arts icon is keen to step back under the lights anywhere, against anyone – as long as it is in the not-too-distant future.

“I am okay with competing anywhere ONE Championship would like me to compete. Apart from Thailand, Singapore is my second home, and it would be nice to one day compete here in front of all my students from Evolve,” he says.

“I am happy to face anyone ONE Championship wants me to face.

“I would like to compete again as soon as possible. Competing on the global stage of ONE Championship is very exciting, and I can’t wait to get back in there.”