ONE Championship’s athletes are some of the most versatile strikers in the world, and it shows in the variety of martial arts kicks they use while competing on the global stage.

From flashy spinning back kicks to simple yet powerful roundhouse kicks, fans will see many kicking techniques in The Home Of Martial Arts.

Here are 10 kicks you’ll see in the Circle, the steps needed to execute them, and which athletes are most likely to use the techniques.

The spinning back kick in ONE Championship has become synonymous with former ONE Lightweight World Champion Eduard “Landslide” Folayang, who has built a reputation as one of the best wushu strikers on the planet.

To execute the spinning back kick, Folayang steps forward with his front leg, spins his body around, and, after re-establishing eye contact with his opponent, “Landslide” will drive the heel of his foot into his adversary’s mid-section or head.

The technique has devastating effect, as it can topple a fighter in an instant, especially if the spinning back kick hits the liver. 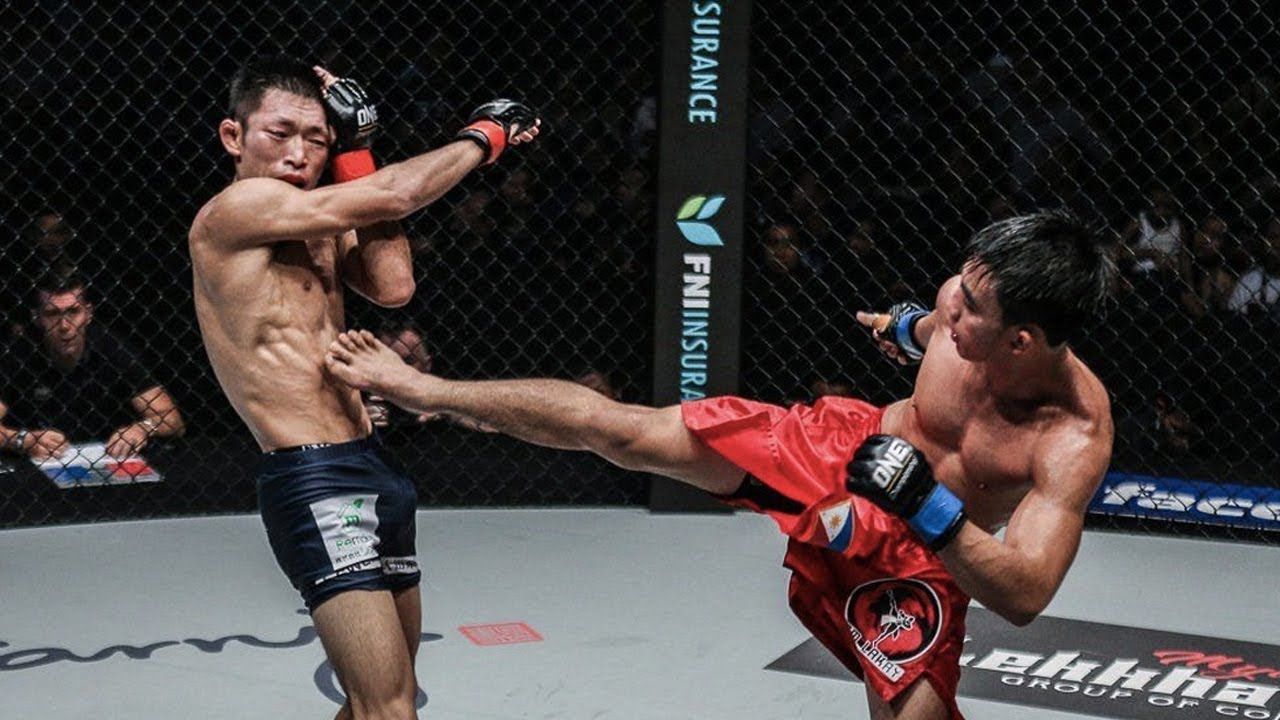 The side kick is a slight variation of the spinning back kick, as it uses the same kicking mechanics except for the spin. The tactic does, however, have equally devastating effects – ONE Strawweight World Champion Joshua “The Passion” Pacio proves this.

In order to pull off the side kick, Pacio turns his body sideways, lifts up his left or right leg, accordions the kicking leg toward his body, and then thrusts it back out at the opponent.

When landed cleanly, the side kick can send a fighter stumbling backward and unable to defend follow-up attacks. At best, the kick can finish a fighter if it touches the liver.

The roundhouse kick might be one of the easier techniques to master, but the force behind these whipping lower limbs can finish a fight instantly. Petchdam “The Baby Shark” Petchyindee Academy showed this against Josh “Timebomb” Tonna.

To throw the roundhouse kick, Petchdam usually keeps his lead leg in place and whips his rear leg up and into his target, at the same time turning his hips to generate power. But when he knocked Tonna out, “The Baby Shark” first stepped into the kick with his front leg, which allowed him to build even more momentum.

The roundhouse kick can be thrown to the body or head, and it’s a staple technique in Muay Thai that often has serious consequences if unchecked.

The push kick, also known as a front thrust kick or teep in Thai, is often used as a defensive technique in Muay Thai. However, some crafty veterans in “the art of eight limbs” use it offensively and to great effect, like former ONE Flyweight Muay Thai World Champion Jonathan “The General” Haggerty.

Haggerty doesn’t wait for his opponent to attack and then use the push kick as a counter. Instead, he uses it offensively, lifting up his lead kicking leg, bringing his knee to his chest, and then launching it forward at his opponent’s body and head.

When timed correctly, the push kick can off-balance a fighter and leave them susceptible to follow-up attacks such as roundhouse kicks or knees.

Whether in mixed martial arts or Muay Thai, a few well-placed low kicks can change the dynamic of a fight in a matter of seconds, as seen in Yodkaikaew “Y2K” Fairtex’s impressive mixed martial arts stoppage victory over Alex Schild.

Yodkaikaew executed his finishing low kicks by stepping in with his front leg and swinging his rear leg like a roundhouse kick. But he didn’t just aim for Schild’s leg; he aimed through it. Those powerful kicks sent Schild to the canvas, where “Y2K” landed a few more grimacing low kicks and forced the referee to wave off the bout.

Because it only takes a few low kicks to cause a lot of damage, they are often the go-to kick in the world of ONE Super Series Muay Thai.

One of the more advanced techniques on this list, the axe kick has devastating effect, especially when delivered against an unsuspecting opponent. This kick, however, takes an incredible amount of flexibility to throw, and that’s why Alain “The Panther” Ngalani is so adept at them.

Ngalani throws the axe kick by lifting his attacking leg straight up as far as he can and then dropping it onto his opponent’s shoulder or head, using his heel to strike with. What makes Ngalani’s axe kick a surprising attack is that it’s coming from someone who’s usually the shorter of the two men in the Circle.

If landed properly, the axe kick can do a lot of damage to a fighter’s shoulder and make it harder for them to throw punches. 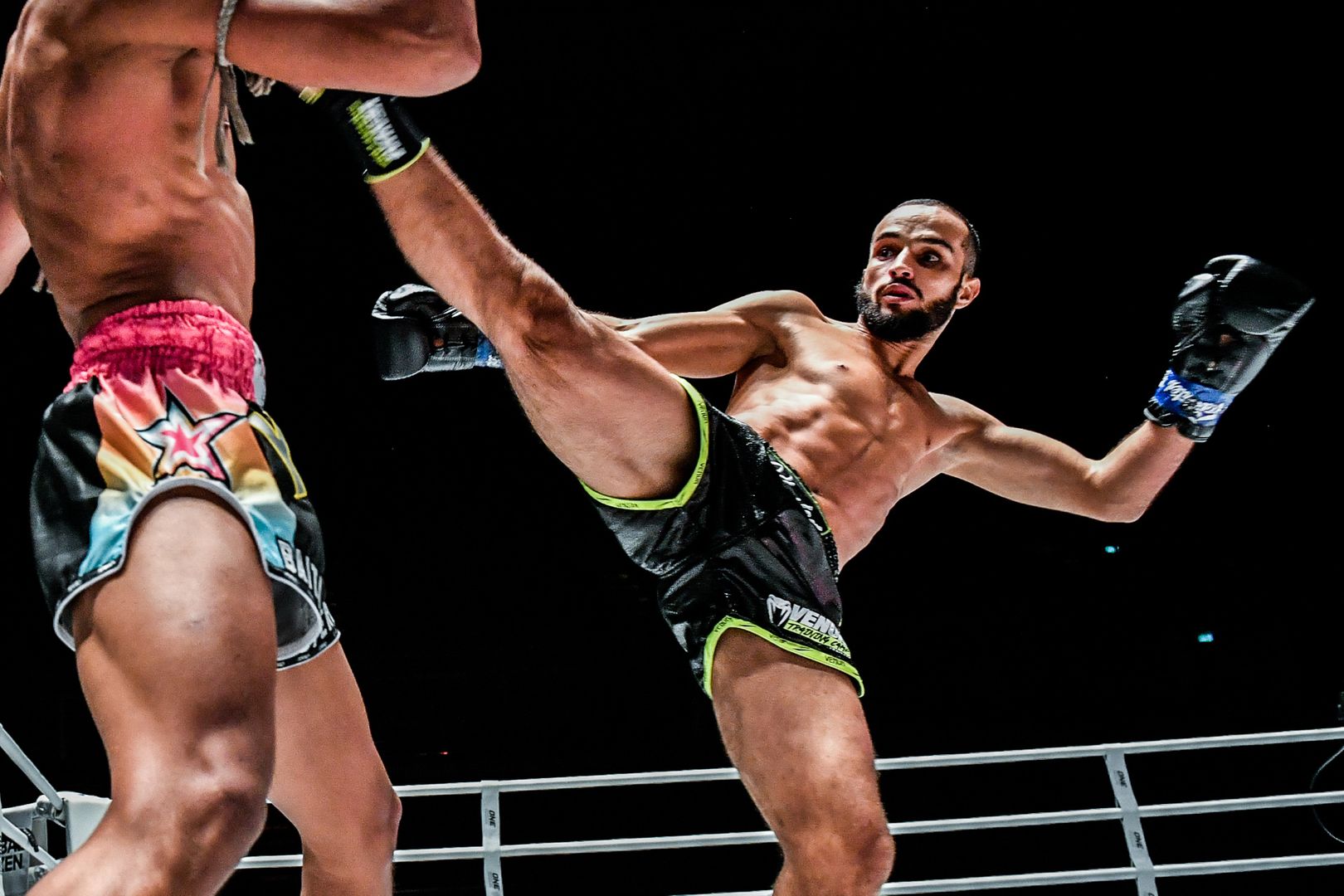 The crescent kick is another advanced high kick that kickboxers will often use in the Circle, and the flashy kick often leads to jaw-dropping reactions.

To throw a crescent kick, a fighter steps forward with his or her rear leg, then lifts their opposite kicking leg up and swings it around in the shape of a crescent. It’s similar to an axe kick but with more of an outward arc.

Also, like the axe kick, the crescent kick usually comes from nowhere and shocks its receiver, allowing the athlete who threw the kick to follow up with more strikes. 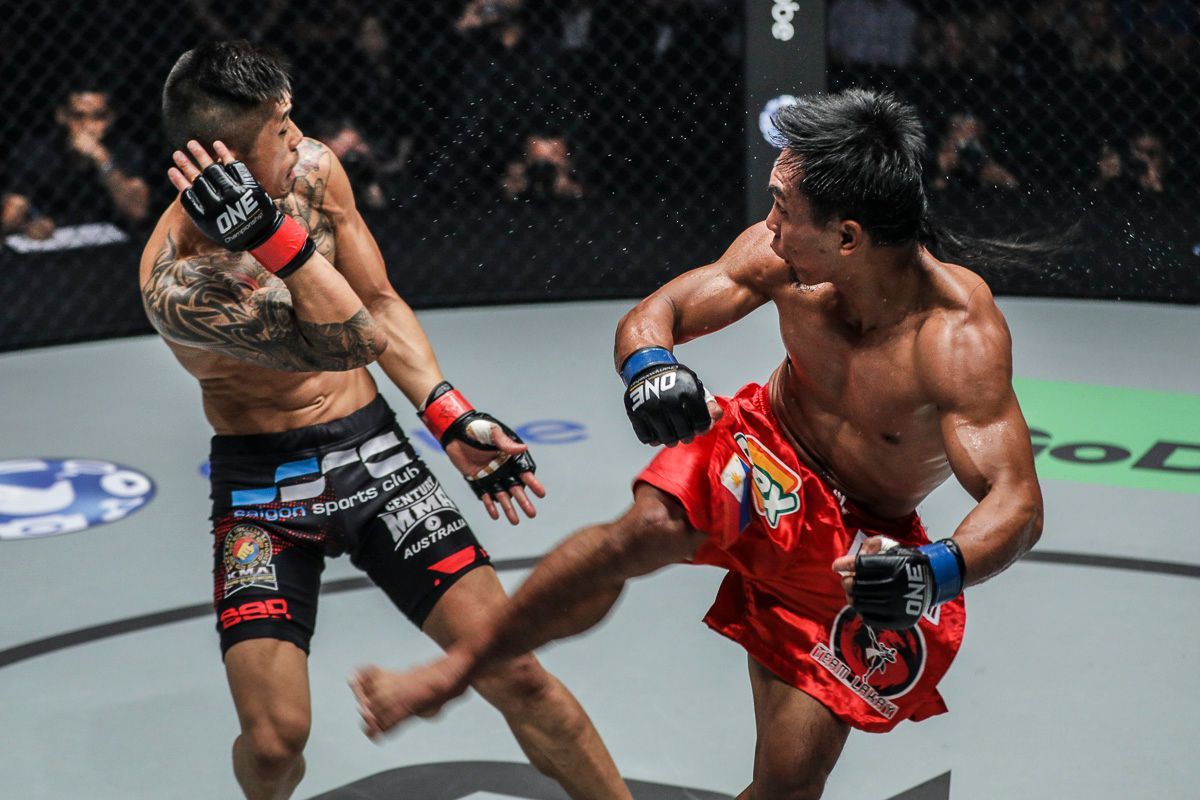 The hook kick may be a popular technique in taekwondo, but athletes like former ONE Bantamweight World Champion Kevin “The Silencer” Belingon have successfully adapted them for mixed martial arts.

Belingon throws the kick by jumping forward, making sure his body is sideways while simultaneously lifting his lead leg, bending at the knee, and then swinging his heel backward and into his opponent.

Like most of the other advanced kicks on this list, it takes years of practice to execute in competition. But when it does land, it can bring with it lots of power.

The calf kick may not be the most popular kick on this list, but it has slowly been gaining traction over the last few years, especially with the athletes from Petchyindee Academy.

The kick involves the same mechanics as a traditional low kick in Muay Thai, except the fighter aims for the calf muscle as opposed to the thigh.

This particular kick works well against aggressive athletes who like to push forward and punch. When landed, the calf kick will slow a fighter down and make them an easier target to hit.

Cut kicks may not be the go-to strike for finishing an opponent, but they can get fighters to rethink their strategy very quickly. You’ll find this technique used a lot in Muay Thai, especially as a counter to a roundhouse kick.

The cut kick is thrown like a low kick, except the target is the opponent’s rear leg – or balancing leg when throwing a roundhouse kick and blocking a body kick. If landed with power, the cut kick can sweep fighters right off their supporting foot.

This kick might not cause a lot of physical damage, but it could affect fighters psychologically as they will be more tentative to throw roundhouse kicks knowing they could possibly be swept off their feet.

Two-sport World Champion Sam-A Gaiyanghadao used this technique from the southpaw stance to near perfection in the inaugural ONE Strawweight Muay Thai World Title bout against Rocky Ogden.