Petchmorakot Petchyindee Academy may be the underdog against Giorgio “The Doctor” Petrosyan, but he knows what it takes to defeat a martial arts legend.

The two-division Lumpinee Stadium and WMC Muay Thai World Champion will face the kickboxing king in at ONE: ENTER THE DRAGON this Friday, 17 May, and he has no doubt he can get his hand raised.

If he does, he will shock the world and move on to the semifinals of the US$1 million ONE Featherweight Kickboxing World Grand Prix.

Living legend Giorgio Petrosyan and Thai warrior Petchmorakot collide on 17 May in the ONE Featherweight Kickboxing World Grand Prix! Predictions?

The 25-year-old’s confidence is born from a time when everyone doubted his ability to defeat another martial arts icon in his homeland.

Back in 2014, he shared the ring with one of his idols, Saenchai P.K. Saenchaimuaythaigym, at the famous Rajadamnern Stadium in Bangkok, Thailand.

Although Petchmorakot was already a World Champion, he was coming off two losses, and had only won three bouts that year. In contrast, Saenchai had won 10 matches in the same period, and he was – and still is – considered to be one of the best Muay Thai athletes of all time.

That did not dent the Ubon Ratchathani native’s enthusiasm before the contest, however.

“It was a really exciting fight for me,” he says.

“All my career, I’ve always wanted to face the best in the world, that has always been my goal as a martial artist

BIG news out of the official press conference for Friday's mega-event, ONE: ENTER THE DRAGON! ????

The stadium was packed with fans, and as the match started, Petchmorakot seemed hesitant.

Despite his nervous start, it did not take long for his true potential to shine through. Over five rounds, he used his height advantage in the clinch to wear down his rival.

By the time the contest entered the closing stages, it was Saenchai who looked forlorn, while his opponent wore a huge smile.

The result surprised many fans, but not the winner.

“I really believed in myself when I fought Saenchai. If I didn’t think I would win, I wouldn’t have fought,” Petchmorakot laughs.

“I’m a clinch fighter and stuck to my game plan. That is what won me the fight. I was so happy to have won. That fight that helped define my career.”

That is no surprise, considering no one else has been able to defeat Saenchai – in 48 bouts and more than four years since.

Petchmorakot's power kicks are UNREAL! ???? Catch the Muay Thai star in action on Friday when he faces the legendary Giorgio Petrosyan in the ONE Featherweight Kickboxing World Grand Prix!

Petchmorakot went on to improve his record to a phenomenal 158-34-2, and so far, excel in ONE Super Series under Muay Thai and kickboxing rules to earn his position among some of the world’s best strikers in the World Grand Prix.

Despite his accomplishments, however, many people still believe Petrosyan – considered to be the best pound-for-pound kickboxer on the planet – will win in Singapore, and march all the way to the final.

Petchmorakot is not one of those people.

The Thai southpaw may be a newcomer to competing under kickboxing rules, but he has no doubt he has the tools to tailor his skills to his new discipline and stun the two-time K-1 World Max Champion

“That fight definitely helped me prepare to face Petrosyan. Beating a legend – I did it once, and I hope to do it again!”

“Lots of people think I can’t beat him, but I believe in myself. I’m training harder than ever. When I train hard and take care of myself, I feel confident.

“I know there are a lot of people out there who are doubting me, but it only motivates me to do even better.” 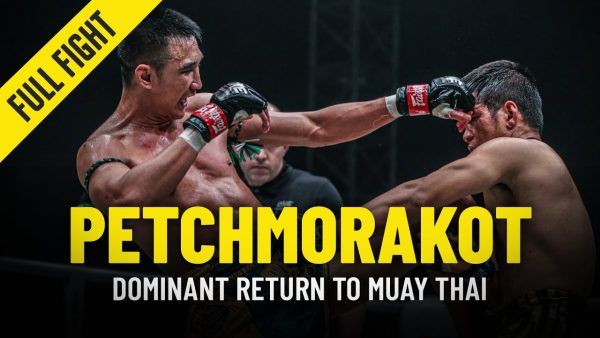