In the lead-up to ONE Championship’s blockbuster, two-part 100th event, ONE: CENTURY, the world’s largest martial arts organization is counting down the best moments in its history.

Every event since the first in November 2011 has brought flashes of unforgettable martial arts action on the global stage from some of the planet’s most talented warriors, so paring the long list of highlights down was a great challenge.

However, after a lot of deliberation, a definitive list of the best bits from The Home Of Martial Arts’ first 99 events has been drawn up, and will be revealed between now and its return to Tokyo, Japan on Sunday, 13 October.

It all begins here with the first 20 standout moments picked from across Asia in the past eight years.

At ONE: BEYOND THE HORIZON, Mustapha ”Dynamite” Haida and Daniel ”The Rock” Dawson engaged in the best ONE Super Series bout of 2018, and you can watch the full bout above.

Martin Nguyen was trying to make history as the first three-division World Champion in mixed martial arts history, but Kevin “The Silencer” Belingon had other ideas, and he was roared on by a passionate Manila crowd to a thrilling ONE Interim Bantamweight World Title victory. All the action is in the video above.

Samy “AK47” Sana was magnificent in the first round of the ONE Featherweight Kickboxing World Grand Prix quarterfinals, and he followed that performance by dominating fan-favorite, multiple-time World Champion Dzhabar “Genghis Khan” Askerov with another classy display of skill and power.

The first four bouts in ONE Super Series that featured Rodtang “The Iron Man” Jitmuangnon were all-action affairs, but nothing can top his ONE Flyweight World Title-winning contest against fellow entertainer Jonathan Haggerty.

When Saygid “Dagi” Guseyn Arslanaliev is in this kind of form, he is unstoppable. Amir Khan had no answer for the Turkish freight train as he ran through him inside the first round of the ONE Lightweight World Grand Prix.

Martin Nguyen’s first attempt at making history as a three-division champion came against Bibiano “The Flash” Fernandes, and he almost did it, but the Brazilian matched him until the final round, when he sealed the win in dramatic fashion.

You know Shannon “OneShin” Wiratchai is always going to bring an entertaining walkout, and this was his best – a tribute to the Monkey King, Sun Wukong, complete with signature staff, from Chinese novel Journey To The West.

Geje “Gravity” Eustaquio has been part of the ONE roster since the promotion’s second show in February 2012. Finally, after more than six years of trying, he won the ONE Flyweight World Title after an epic five-round battle with Adriano Moraes.

It did not take long for mixed martial arts legend Shinya “Tobikan Judan” Aoki to make his mark on the global stage. The ONE Lightweight World Title was his after his second ONE bout thanks to a trademark submission of Kotetsu Boku.

Big things were expected from “The Panda” Xiong Jing Nan when she first stepped into the Circle, and she lived up to the hype with this stunning finish of April Osenio.

Martin “The Situ-Asian” Nguyen became the most dominant ONE Featherweight World Champion in history – a commanding performance against his toughest challenger that ended in an overwhelming finish.

Arslanaliev began his ONE Lightweight World Grand Prix campaign even more impressively than the semifinal performance above – with a KO of Ev Ting that took all of 25 seconds.

Japanese veteran Kotetsu “No Face” Boku was 28 bouts into his mixed martial arts career when he finally won a World Title, and he did it with a fantastic comeback KO against Zorobabel Moreira.

The Philippines has embraced ONE like perhaps no other nation in Asia, and a long and happy relationship began in August 2012 in Quezon City, with ONE: PRIDE OF A NATION, which featured Bibiano Fernandes’ promotional debut, as well as wins for Team Lakay heroes Eduard “Landslide Folayang and Honorio “The Rock” Banario.

Adriano “Mikinho” Moraes did what he does best to win the inaugural ONE Flyweight World Title as he kicked off a long rivalry with Geje Eustaquio by snatching an opportunistic guillotine choke submission.

#85 Kingad And Wakamatsu Bring The House Down

Danny “The King” Kingad and Yuya “Little Piranha” Wakamatsu engaged in a modern classic full of twists, turns, and shifts in momentum when they met last October. Watch every thrilling second in the above video.

Yushin “Thunder” Okami hoped to mark his ONE debut with a win, but Kiamrian Abbasov had other ideas. The Kyrgyz warrior’s stunning second-round KO established him as a top contender at welterweight.

#83 Rodtang Runs Through Sok Thy

In front of his home fans in Bangkok, Thailand, “The Iron Man” needed a win against Cambodia’s Sok Thy, and he sent the fans wild with his most aggressive ONE Super Series performance to date.

The Home Of Martial Arts visited the Thuwunna Indoor Stadium for the first time for ONE: KINGDOM OF WARRIORS in July 2015, and started as it meant to go on with a night of non-stop thrills and spills – including two dramatic, one-night tournaments

Nong-O Gaiyanghadao is one of the greatest Muay Thai practitioners in history, and he established the latest chapter of his legacy by winning the ONE Bantamweight Muay Thai World Title in front of his countrymen in Bangkok. 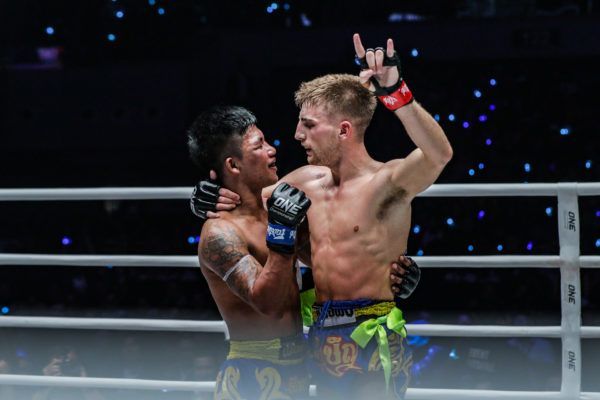