Manila has always been a hotbed for Asian MMA, and each show held in the Philippines’ bustling capital city is memorable.

ONE: AGE OF DOMINATION is set to send the Mall of Asia Arena crowd into a frenzy this Friday, 2 December. While there are many things to do in Manila on a Friday night, there is only one place where you can get adrenaline-pumping action.

Here are Three Reasons to catch ONE: AGE OF DOMINATION live, on-air, or on pay-per-view at http://oneppv.com/.

Title bouts add a certain depth to a fight card. Whenever a title is on the line, the stakes are high. At ONE: AGE OF DOMINATION, there are two world championship bouts set to take place inside the ONE Championship cage.

Both title bouts are compelling because they are evenly matched.

On one hand you have Brandon Vera, who captured the heavyweight belt last year with a first-round knockout over Paul Cheng. He is the Philippines’ most popular MMA world champion, and has recently moved to Manila from San Diego to be closer to his fans.

Sekine is a great test for Vera at this stage of his career. The man nicknamed “Shrek” is just physically huge. His size and strength will be a tough matchup for Vera. He is also incredibly skilled and talented in the grappling department. It should be an interesting bout, one that will not disappoint in terms of action and excitement.

On the other hand, there is the Fernandes-McLaren mega showdown between two Brazilian jiu-jitsu black belts. Both Fernandes and McLaren are great grapplers, and the prospect of having them face off on the mat is truly one to look forward to.

Fernandes is a slightly better striker, and a slightly more well-rounded mixed martial artist, which is why he is the champion. There iss a good reason why Fernandes is the favorite. But McLaren is the king of the upsets, having defeated both Mark Striegl and Muin Gafurov in his first two fights in ONE Championship as an underdog.

The main and co-main events are what everyone is waiting for, and rightfully so. It should be a crazy night. 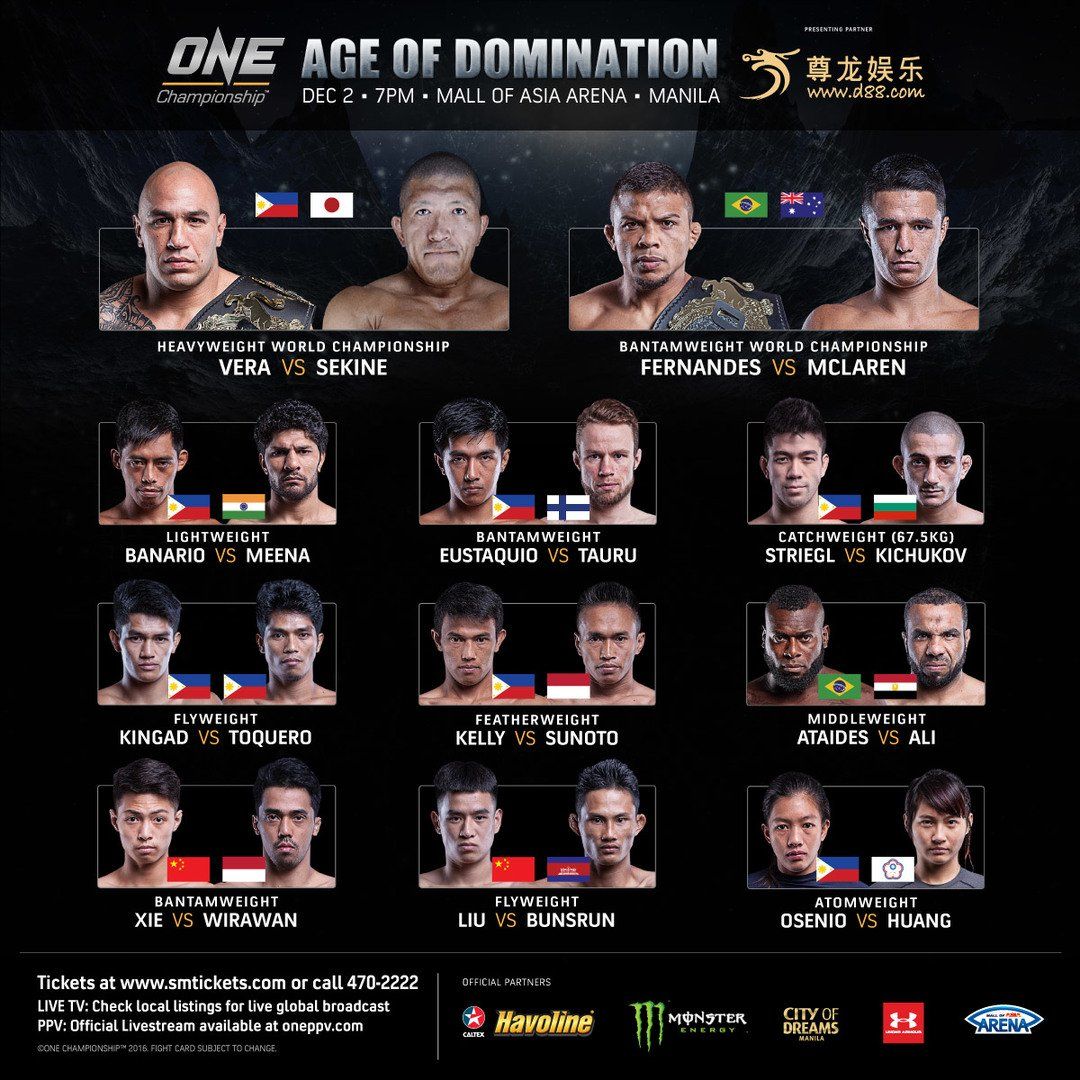 2. It Is A Filipino Fighter Showcase

However, it is not just the last two bouts people want to see. What makes a great fight card are solid supporting bouts, and ONE: AGE OF DOMINATION does not disappoint.

Being that it is held in Manila, it is only natural to showcase Filipino MMA talent. ONE: AGE OF DOMINATION is certainly not lacking in homegrown mixed martial arts warriors.

Filipinos are historically great warriors, dating back to the legendary Lapu Lapu who defended his land from Spanish conquistadors in the country’s early history. The nine Filipino warriors competing inside the ONE Championship cage Friday night all possess the same fighting spirit and nationalistic pride Lapu Lapu had, and they have all come to defend their home turf.

Fans of MMA in the Philippines love to get behind their athletes, and having nine Filipino MMA fighters on the card all but guarantees an electric atmosphere on fight night.

It is not only the local talent that will bring the heat to Manila, however. There is a multitude of great international bouts to look forward to as well.

Leandro Ataides and Mohamed Ali look to put on a show, as two hulkish middleweight contenders lock horns. Both Ataides and Ali are ultra-aggressive fighters, and given their sheer size and strength, there is no way this fight will not be exciting.

Ataides owns six spectacular finishes out of eight wins total, while Ali has eight out of ten. That pretty much tells us this bout will not go the distance. Both fighters are constantly in pursuit of the finish, and will try to stop each other before the final bell.

Aside from Ataides-Ali, there is also the bout between Indonesia’s Mario Satya Wirawan and China’s Xie Bin. Both are relatively young fighters and new to the sport of MMA, but have both shown tremendous promise.

Wirawan shocked the world with a six-second knockout over Chan Heng last year — one of the fastest knockouts in MMA history and tied for ONE’s promotional record. Xie is also one of the most promising bantamweight prospects from China, and will do his best to thwart Wirawan’s knockout plans.

Add Liu Peng Shuai and Sim Bunsrun, and we have a great carousel of international bouts that will be packed with action.